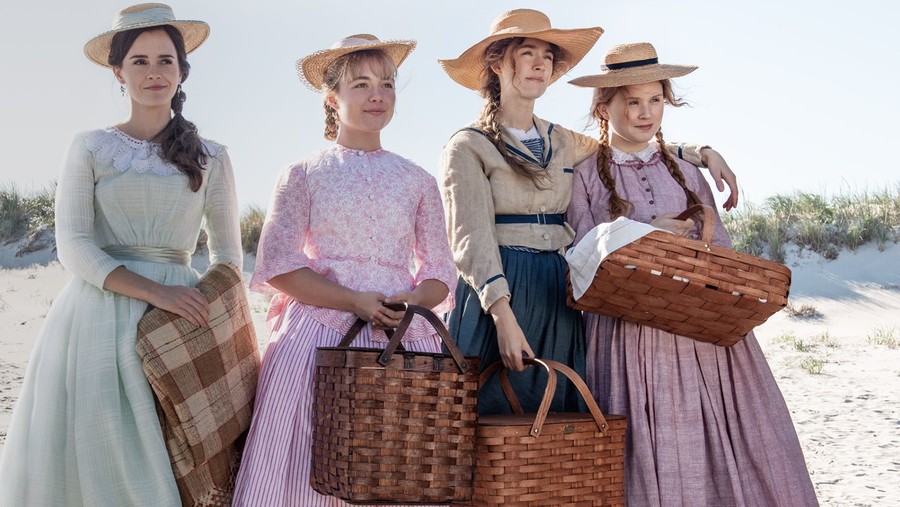 “No one makes their own way. Not really,” Aunt March (Meryl Streep) tells her fiercely independent niece Jo (Saoirse Ronan) in an exchange that defines the newest adaptation of Louisa May Alcott’s Little Women. But Alcott’s classic novel isn’t the only work of literature writer/director Greta Gerwig seems to draw from in the film: Gerwig crafts the tone of Little Women with an eye to of the works of Jane Austen and Edith Wharton, imbuing the key events of the March sisters’ lives with the push-pull tension of financial deprivation and the need for artistic and romantic freedom. Like Pride and Prejudice, Little Women is the story of a family navigating financial hard times, its only hope for social mobility weighing on the shoulders of its daughters. As played by Streep, Aunt March recalls the fearsome screen presence of an archetypal Maggie Smith character: a beacon of practicality with a shrewd understanding of, and interest in upholding, the social order of a patriarchal society. Aunt March’s acidic tongue creates a welcome balance between the realistic and romantic.

But there is so much romance to be had. Little Women follows Beth (Eliza Scanlen), Amy (Florence Pugh), Jo, and Meg March (Emma Watson) as they come of age in Massachusetts during the Civil War. Their mother, Marmee (Laura Dern), is raising them alone while their father (Bob Odenkirk) is away helping with the war effort. Across the way from their cottage lives Laurie (Timothee Chalamet) and his grandfather, Mr. Laurence (Chris Cooper), in an estate that is spacious but lonely. Meeting the March women puts some much-needed energy back into the men’s lives, and the same holds true for the women: Laurie falls in love with Jo immediately, with Amy falling for him just as fast. Meg finds love with Laurie’s tutor, John (James Norton), while Beth bonds with Mr. Laurence over music. Aunt March serves as the Greek chorus of the film, commenting on the events with a consistent, comical disdain, and though money troubles plague the March women every step of the way, over time they become more and more resilient.

In contrast to previous, straightforward adaptations, the film moves through time fluidly, juxtaposing courtships with marriages and love with loss. There’s something awe-inspiring in the way Gerwig guides this play with time, drawing emotional connections between past and present in a way that appears to viewers to be deceptively easy. The structure also allows the film to function as a meditation on the novel’s biggest themes, rather than its narrative trajectory. Specifically, the story here is framed by Jo’s determination to become a published, successful author. The discussions that ensue between her and the publisher Mr. Dashwood (Tracy Letts) feel like a meta-commentary on Alcott’s own experience, imagining the hoops a woman writer in the 19th century would have to jump through to get her work into the world without sacrificing her story’s core vision. (Late in the film, Jo cements the negotiation for a book deal with an all-time great line: “If I am to sell my heroine into marriage for money, I may as well get some of it.”)

Gerwig provides further insight into her characters by taking personality traits that would be modified (or mocked outright) in a contemporary context and choosing to magnify them instead. Laurie is still as lovesick and childish as he was in Gillian Armstrong’s beloved 1994 adaptation, but Gerwig also tunes in to his pain and feelings of purposelessness. Chalamet gives a full-bodied performance, his face a canvas for his anguish and thirst to be loved. When Jo turns him down after Meg’s wedding, the light in his eyes go out, a moment that hurts even more to watch as it’s matched with scenes of the two having fun together before love got in the way. But while Jo didn’t acknowledge it, the love was always there. Even when the onscreen focus is off Laurie, his eyes remain on Jo.

Little Women often focuses on the little negotiations of life, with Marmee serving as a living embodiment of that conflict. During a heart-to-heart conversation with Jo, she reveals that she’s always angry, but she holds it together with “40 years of effort.” When her husband returns, she tells him she’s excited he’s home so that she can “be angry with him in person.” In both this film and Gerwig’s previous one, 2017’s Lady Bird, she uses her role as director to make it clear that she has empathy most of all for her maternal characters, giving them complex emotional landscapes and interior lives, even if the viewer doesn’t get to see all of it. Jo uses Marmee’s example when dealing with Amy, trying to care for her as a parent would.

The world is alive around the March family, and moments of selfishness are always bolstered by a reminder that the world is bigger than the loves and losses of one group of people.

Aside from the nonlinear structure, Little Women’s biggest departure from previous adaptations of the novel is in the character of Amy. Gerwig’s script refuses to characterize Amy as merely spiteful and frivolous, instead offering a way for audiences to understand her jealousy of Jo and reminding us of the frustrations that tend to come along with being a little sister. Behind Amy’s diva attitude is an insecurity that the film excels at exploring, especially during her time in France, where she works on her painting. Meg gets more dimension as well, even as her more traditional dreams are belittled by the career-focused Jo: Meg loves frilly dresses and jewelry, and looks forward to being a homemaker, embodying Marmee’s remark that “pretty things should be enjoyed.” Little Women, now and always, emphasizes that there is more than one way to be independent.

With Lady Bird and now with Little Women, Gerwig guides her stories through emotional highs and lows, creating a narrative that moves like an album with meticulously arranged tracks. But she also resists the urge to only play the hits: Every character’s story is important, regardless of their screen time. The world is alive around the March family, and moments of selfishness are always bolstered by a reminder that the world is bigger than the loves and losses of one group of people. For example, in one scene, the girls are all complaining about being poor; in the next, they’re visiting a shack where a mother shares her bed with her children. When Marmee remarks that she’s “spent [her] whole life ashamed of [her] country,” a Black woman working with her remarks “You should still be ashamed.” During an argument in school about the war, one of Amy’s classmates delivers a line that underlines the complexity of white culpability in slavery: “Everyone benefited from the system, why must only the South be punished?”

Moments like these are reminders of the urgency of the text, and of how rewarding it can be for a contemporary audience to re-examine the classic stories we read in our childhood. Gerwig uses her adaptation to analyze the underlying themes and flat spots within the text itself; it is a film in conversation with its source material and one that, in turn, mirrors Jo’s onscreen writing process. Unlike the 1994 version, Jo does not end her journey with love. There is a love there, but he’s not as important as her journey as a writer. In the end, as Jo holds the first printing of her novel, it reminds us of a different kind of romantic relationship—that between a writer and her work. That, in a way, is a marriage all on its own.