No One Can Escape Diet Culture—Even Lizzo 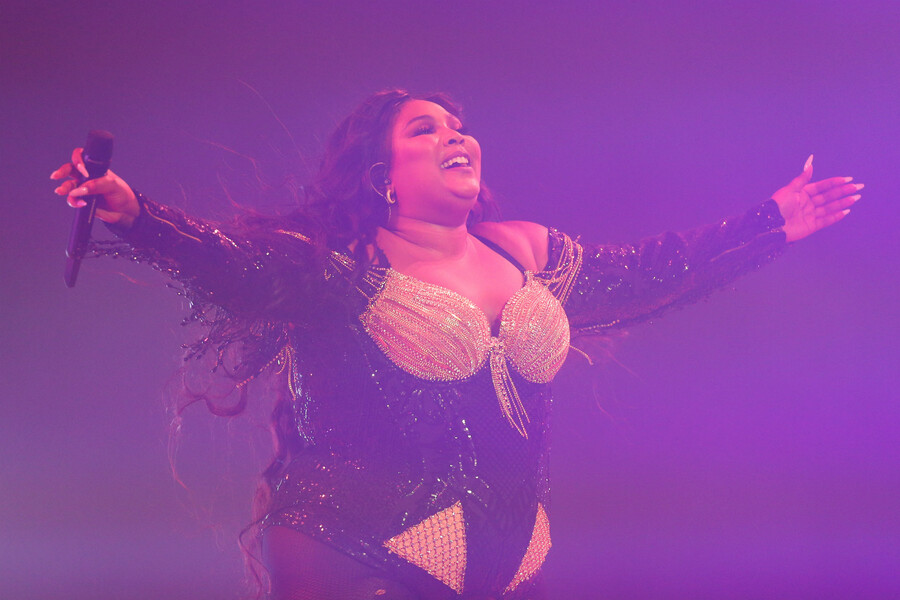 Oh Lizzo. On Monday, December 14, Lizzo used her Instagram Story to chronicle a 10-day detox, which included downing tea and multiple smoothies; eating apples and peanut butter as well as cucumbers soaked in apple cider vinegar; soaking in a bathtub full of herbs; taking (iffy) supplements; and of course, posing for before-and-after photos. On some level, Lizzo broadcast her dieting routine to her more than 9 million followers for promotional reasons: JJ Smith, the creator of the detox plan she used, is a Black woman who has built a large platform on Instagram and elsewhere teaching people how to “clear out” their bodies, specifically their livers. Like other wellness “gurus,” Smith also promotes unfounded dieting tips that purport to help participants lose up to 50 pounds in five months and shrink their waistlines. She’s even appeared on Dr. Oz, a syndicated show on which Donald Trump’s favorite quack peddles disinformation about wellness to millions of viewers.

On another level, Lizzo wanted to show the world that fat people, especially fat Black women, can do with their bodies what thinner people do without succumbing to diet culture. Yes, this is as odd as it sounds, but Lizzo still attempted to make the argument in good faith: “I would normally be so afraid and ashamed to post things like this online because I feel as a fat girl, people just expect if you are doing some sort of thing for health, that you’re doing it for some dramatic weight loss,” she said in her Instagram Story after she began receiving backlash. “That is not the case. In reality, November stressed me the fuck out. I drank a lot. I ate a lot of spicy things that fucked my stomach up and I wanted to reverse it and get my health back to where I was.” But whatever her reasons, Lizzo’s disclosure immediately drummed up controversy: Some fans were disappointed that their patron saint of body positivity broadcast her detox online. Others were adamant that Lizzo should be allowed to do with her body as she pleases—after all, hadn’t people praised Adele’s reveal of her own post–weight-loss body earlier this year? Still others couldn’t understand why a celebrity attempting a detox was worthy of discussion to begin with.

I’m in this latter group. As I watched Lizzo’s Instagram Story—and then watched her defend the detox before scrubbing her feed clean of the whole fiasco—a simple question crossed my mind: Why did Lizzo share such a personal decision with 9 million followers? She’s well aware that she’s been anointed a paragon of body positivity whether or not she wants to be, most likely because any fat woman who dares to live is categorized as such. In a world that still sees thinness as the ideal and larger bodies as transgressing the social order, our sheer unwillingness to apologize for being fat is considered an act of bravery. Like many pop artists, Lizzo sings openly about the ups and downs; but unlike most of them, her honesty and self-love has been deemed a form of body activism without either her input or her consent. “It bothered me for a long time that all people could talk about or think about was my size,” Lizzo told David Letterman in a recent episode of his Netflix series My Next Guest Needs No Introduction. “I didn’t like when people condemned me for it, and it also kind of rubbed me the wrong way when I was praised.” Lizzo, alongside other fat women in the internet age, including Adele, face an unwinnable conundrum: She’s unapologetically herself, which might inspire others to reject diet culture—but she doesn’t want to be idolized for simply living in the only way she knows how.

Perhaps that’s why Lizzo shared her detox story: If she can’t avoid the inevitable public focus on her body, she can at least use her visibility to debunk the idea that fat women are only invested in wellness as a means of weight loss. After all, she has previously posted her workout routine as a way to counter social media’s insistence that fat people can’t be healthy. If she’s going to be positioned as a figurehead of a movement, she might as well leverage that status to challenge widely held stereotypes about the limitations and habits of fat bodies. But even that logic has proved to be a double-edged sword for Lizzo, and for other fat women online and off: We’re all capable of succumbing to the allure of diet culture because we’re all indoctrinated in it and must actively fight to unlearn it. In a social-media ecosystem that encourages users to overshare as a way to build followings, brands, and in some cases entire careers, unlearning in public can be both useful and profitable—but it can also backfire. For social-media influencers or Instagram users who supplement their income by selling advertisements and creating branded content based on their own personal lives, oversharing is good business. For those who want to use their own experience to educate others, it can seem like a necessary evil.

Either way, the lines between sharing as a form of public good, sharing as a way to accrue clout, and sharing in a way that causes unintentional collateral damage are likely to get blurry. In this case, Lizzo did the latter—sharing her detox to dispel the myth that all people diet to lose weight, while also falling into the trap of sharing a before-and-after photo and, very likely, encouraging disordered eating. It’s unlikely that she did so with bad intent, but the damage is done nevertheless. Detoxing is a form of dieting, regardless of how it’s marketed, and dieting is nearly always a gateway to disordered eating. Not a single person, including someone who has been declared a body-positive icon (and seemingly embraced the label), is immune to the trappings of fatphobic diet culture. The idea that fat bodies—or anybody perceived as fat—is a work in progress that can be perfected through restrictive dieting (which can sometimes take the form of detoxing), is so pervasive that there’s a billion-dollar industry built around it. Unlearning the idea that a fat body is incomplete, that it can be inhabited and taken care of without being worked on, is a lifelong process that isn’t linear.

Asking Lizzo to speed up the pace of her own unlearning because she’s a famous woman in a fat body is both unrealistic and unfair—especially given the sheer number of thinner celebrities who are paid to promote controversial dieting teas on Instagram. In 2018, the Guardian published an eye-opening piece about Flat Tummy Tea becoming an Instagram phenomenon by tapping  influencers, including the Kardashians, to promote their products. Hiring high-profile brand ambassadors to hawk Flat Tummy Tea’s products (including appetite suppressants) bought the company both goodwill and trust, despite the reality that the company, and others that rushed to imitate it, promote disordered eating—via laxatives, no less—in ways that have a demonstrable negative impact. “Dietary supplements sold for detox or weight loss are snake oil, plain and simple,” Dr. S Bryn Austin, a Harvard Medical School professor who specializes in eating- disorder risks, told the Guardian. “The liver and kidneys already do the so-called detox, and adding junk products into the diet only makes their job harder. And weight loss claims for these products are either [an] outright sham or a result of adulteration of the products with potentially dangerous stimulants, laxatives, or diuretics.” In other words, bodies detox themselves, and no amount of supplements, smoothies, or apple cider vinegar do more than our own bodies naturally do to regulate us.

Dieting can never be touted as a body-positive choice because it literally relies on starving the body to achieve a specific aim.

However, influencers and celebrities, including Beyoncé—who has promoted a detox on national television—have for years normalized the idea that “cleaning out our bodies” is not a diet, but simply a step toward “wellness.” And attempting to dress up detoxes—or the keto diet, or so-called gut health—in order to maintain membership in the body-positive community merely reinforces the very diet culture fat liberation is attempting to dismantle. The reality that our bodies, most of the time, will clean and restore themselves without the intervention of teas and juice fasts and supplements is a difficult sell when detoxes are treated as a “healthy” form of restricting. After all, if Lizzo endorses detoxing—or the Kardashians or any other number of celebrities—then how dangerous can it really be? No one should police Lizzo’s body or what she chooses to do with it, but that has not been a reality for her. She’s been subjected to intense scrutiny by mere virtue of being a fat public figure. She can’t even get dressed and go to a basketball game without making headlines, so it’s understandable that she, or any other fat celebrity, would want to reclaim her body for herself, not subjected to any other person’s whims about who she should be or how she should be in the world.

However, sharing a detox in public doesn’t remove the bulls-eye; it only increases its size, making her body—once again—a target for the judgment and disdain that has always surrounded fatness in a consumer culture. Everyone who embarks on a fat-liberation journey must unlearn at their own pace throughout their lives. However, there is also zero need for her to share this kind of routine online—or attempt to declare detoxing a body-positive action. “I’m so proud of myself. I’m proud of my results,” Lizzo said in her Instagram Story. “My sleep has improved. My hydration, my inner peace, my mental stability. My fucking body, my fucking skin, my eyes, like I feel and look like a bad bitch. And I think like that’s it. I’m a big girl who did a smoothie detox.”

It’s not that Lizzo is a fat woman doing a smoothie detox; it’s seeing a smoothie detox as essential to rebalancing her life that raises concern. Dieting can never be touted as a body-positive choice because it literally relies on starving the body to achieve a specific aim. No matter how it’s spun, no matter how individual the choice, it feeds into an existing, shaming, and often physically harmful culture of fatphobia. “Self-love” does not make a movement. Instead, fat liberation seeks to shift the very paradigm of diet culture—to expose its shallowness, its dangerousness, and its willingness to profit from the shame and pain of fat people. Though Lizzo has benefited from fat liberation, she might not be interested in being its face; and that’s okay. But at the bare minimum, can she—and all of us—keep our detoxes off the internet? For the good of ourselves, and the actual good of our bodies.

Read this Next: Our Response to Adele’s Weight Loss Says More about Us Than Her 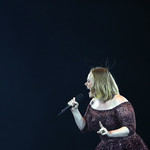 by Evette Dionne
The body-positive movement limits its scope to individual people’s always evolving bodies rather than the systems that turn weight loss into headline-making news.