London Band Savages Shred on a Raucous Ode to Love 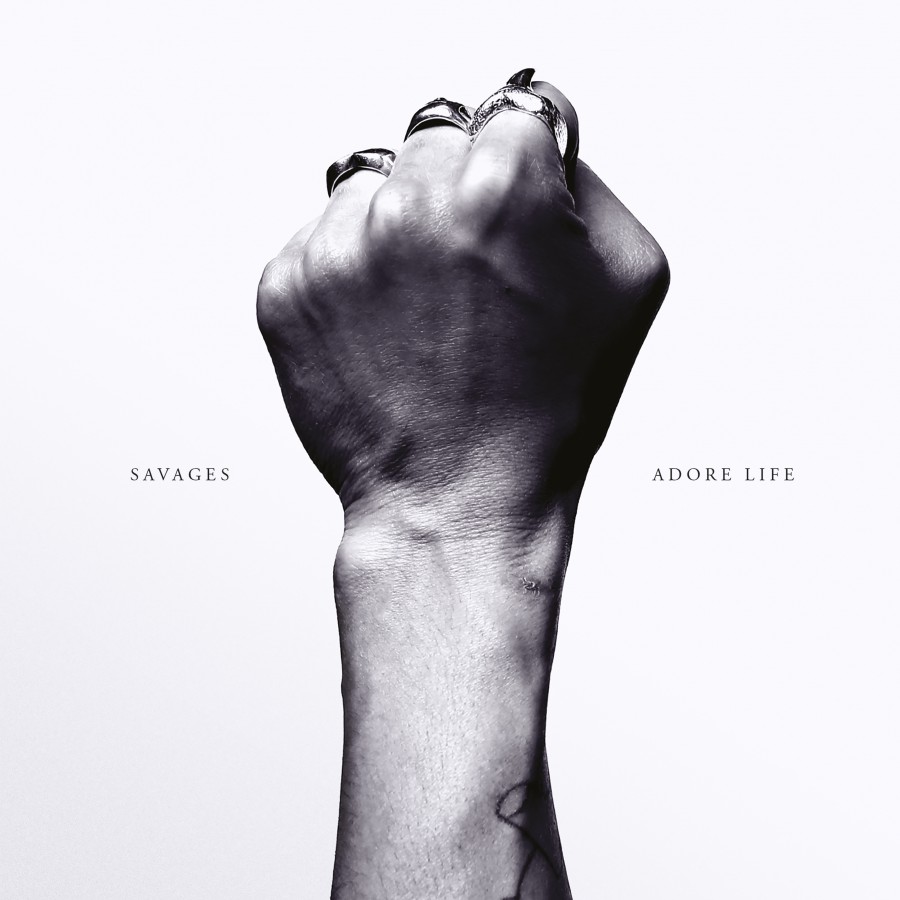 When New York punk band Perfect Pussy named their 2014 debut album Say Yes to Love, it seemed like something of a non-sequitur. How could an album so visceral, so raw, so violent be about saying yes to love? And yet: the lyrics that lead singer Meredith Graves screamed through impenetrable distortion were indeed about love and the need for connection. Perfect Pussy’s project was to highlight the jagged edges of love and that’s a project now taken up by London quartet Savages on that band’s new album Adore Life.

On first listen, there aren’t many soft edges to be found on Adore Life. Vocalist Jehnny Beth’s voice is low and filled with unflinching vibrato—she sings like she’s making eye contact with you and would win every staring contest. The taut, relentless guitar work of Gemma Thompson, Fay Milton’s riotous drums, and Ayşe Hassan’s stinging basslines all provide a rough, angular sound that registers closer to war cries than sweet nothings. And that, it turns out, was Beth’s goal.

Early in Savages’ history, Beth was reading poetry about war. She sought for a way to work the violence and beauty she encountered there into one conduit. The band’s first record, 2013’s Silence Yourself, was an obvious hybrid of those influences. From the outset, Adore Life’s bruising opening chords follow suit: Beth’s first words are, “If you don’t love me / Don’t love anybody.”

Yet, almost immediately, light gets through. Savages makes their impact with power, not anger. There isn’t a song on this album that lacks at least a moment of major endorphin delivery. Part of that rush is due to Beth, whose voice is never more compelling than when she swoops into a full-throated higher register with little advance warning. The band performs with an exhilarating and affirming life force. Watch any videos of their live performances, including music videos, to see the positive effect of their passion borne out physically. More than anything else, Savages is exciting. Which is why, ultimately, the initial impression of Adore Life having nothing but rough edges isn’t the full picture. How could it be, when the refrain of album opener (and first single) “The Answer” is that “Love is the answer / Love is the answer”? Or when “Sad Person” opens like a moody rock song, but suddenly blooms into something closer to a YACHT B-side?

Adore Life is an exhilarating album obsessed with love, the same way Perfect Pussy’s Say Yes To Love is. This is a stunning collection of songs dedicated to the heart-pounding, life-altering, world-rocking, de-stabilizing parts of love. Too often joy is seen as anathema to rock music, particularly punk and its offshoots. Loud, raucous, thrilling joy is what Savages is all about. Nowhere is the band’s immanent joie de vivre on better display than in “Adore,” during which Beth sings, part sledgehammer and part beam of light, “I need to say: I adore life / Do you adore life?” You’d be hard-pressed to find a band that adores life more audibly than this one.

by Marya Jones
From Yoko Ono and the Supremes to women in punk and hardcore.