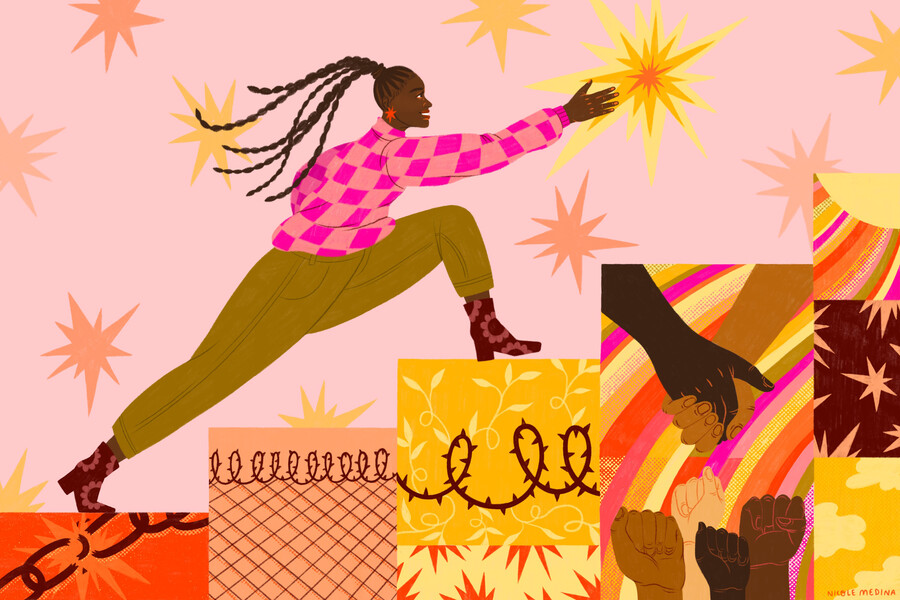 When I first began talking to my longtime friend Garrett about being on the road to becoming a prison-industrial complex (PIC) abolitionist, he asked me, “How will we deal with crime and safety if there are no police departments?” Garrett and I debate often about social-justice issues including race, class, and gender because that’s our thing. He considers me an oddball radical—a dreamer who wants things, socially and politically, that “the United States isn’t ready for.” But his question about PIC abolition isn’t anomalous. Even my friends who are more left-leaning give me a side-eye when I talk about abolishing the prison-industrial complex in its entirety. My answer to this common question about abolition, police, and safety is always this: U.S. police departments aren’t fighting crime in the ways most people believe they are. In an August 2020 article for The Conversation, Shima Baughman, a criminal law professor at the University of Utah, noted that an estimated 11 percent of serious crimes end in an arrest—and only 2 percent end in a conviction.

As longtime organizer Mariame Kaba asserted in a June 2020 article for the New York Times, “A ‘safe’ world is not one in which the police keep Black and other marginalized people in check through threats of arrest, incarceration, violence, and death.” Furthermore, if you ask many Black people in the United States, myself included, we have rarely if ever felt safe in the company of the police. This is not hyperbole. I fundamentally understand that my ever-increasing tax dollars pay heavily toward funding my local police department. I know that all people regardless of their citizenship status deserve to feel served and protected by police officers and that we shouldn’t constantly live in fear that people we know or don’t know might be—at any time and for any reason—harmed by the police. My earliest memories of interactions with police officers come from watching as a child my father nervously speaking with white cops during various traffic stops—a result of driving east through Texas on our way to visit family in southwest Louisiana.

I came of age in the ’80s, and even then—supposedly long after a need for The Negro Motorist Green Book—I had a keen understanding of what sundown towns were. The rules were simple: I needed to be quiet, sit still, and be as obedient as possible whenever I saw police lights or heard police sirens, as that obedience might ensure my safety and my survival. Whether they recognized it or not, those white officers were continuing a legacy of policing that’s rooted in slavery, so much so that police systems (and the American carceral system overall) are often labeled as slavery by another name. As I moved into my teenage years, I carried those lessons with me. My parents had some version of “the talk” with me often as I became more independent, and as my community began to experience violence and economic decline due to a combination of Reaganomics (which economically crippled communities like mine) and the ongoing war on drugs (which always seemed like a war on Black people).

By the early ’90s, cops had license to police our communities in plain clothes and unmarked cars. In my neighborhood, we called them the jump-out boys. They were everywhere and did whatever they wanted to do. I often watched them snatch up people who I knew and cared for: children I went to school with, folks who were struggling with addiction or other hardships, and lots of folks who were simply in the wrong place, wearing the wrong clothes, or being the wrong color at the wrong time. As an adult, who understands systems of oppression and how they intersect to create a “shadow carceral state,” I know that my family and I were experiencing a militarized police presence that was exceedingly violent and inhumane. Even in rare moments when my family or I have called the police for safety and support, we were never treated with the humanity we deserved, as though our need for police help inconvenienced and annoyed the responding officers.

My younger self needed to know that I deserved community safety, that communities exist where police do not occupy a constant militarized presence, that cops don’t belong in schools, that those struggling with drug addiction deserve compassion and treatment rather than prison sentences, that one’s race or class should not determine whether a person goes to prison or not, and that another world is possible where we—as a society—invest more in care than in cops. My decision to work toward prison abolition is a love story—one in which I seek to better love my community and the world and to create safer communities that can better love the younger version of myself. Love stories like mine center imagination and possibility and focus on “presence, not absence,” as the great abolitionist thinker and strategist Ruth Wilson Gilmore is often quoted as saying.

Gilmore goes on to say that abolition is “about building life-affirming institutions”—an idea that author and Black feminist abolitionist adrienne maree brown explores in her new book We Will Not Cancel Us: And Other Dreams of Transformative Justice. brown believes that we must commit to dismantling old systems and building new ones if we are to “generate a future in which we all know we can belong, be human, and be held.” The work of dismantling old systems attracted organizer Stephanie D. Keene to abolition. For her, it was a gradual transition that began while she was teaching (mostly Black and Brown) women in jail. She found herself asking a lot of questions about how the women she was teaching were being treated in that carceral system. “Once, in the midst of my questioning, a woman asked me, ‘Why do you care so much?’ I was perceived as a social worker, and yet she didn’t understand why I would care,” Keene told Bitch. “That exchange (along with everything I witnessed and felt in that place) broke my heart and pissed me off.” As far as why she considers abolition work love work, she shared, “We’re not only working to abolish the prison-industrial complex (of which police systems are a part). We’re also working to build communities of care. We’re working to see that folks’ needs are met. We’re working to reduce violence and other harm. All of that comes from a place of love for the people.”

We can’t hope to create life-affirming systems after abolishing harmful, decaying systems if we have yet to address how those systems live within us.

Software engineer and digital worker Ann Daramola was moved to think more deeply about carceral systems as she contemplated how empire evolves “over time and throughout space” and how “every corner of our reality has been shaped and colonized by…empire.” “On October 20, 2020, I watched, horrified, as the Nigerian Army shot and killed young Nigerians sitting on the ground, waving Nigerian flags, singing the Nigerian anthem, protesting to put an end to the oppression they experienced from the state,” Daramola told Bitch. “As I watched how photos of dead bodies flooded social media, the connection between their fight and the ongoing fight of Black people living in the Africas, [in] the Americas, and throughout the world clicked into place for me. The same force that powers the prison-industrial complex in the Americas is the same force that empowers Nigeria’s army. I could no longer unsee the thing I was always seeing.” This work to confront empire and the carceral state is also a labor of love for Daramola.

“Whether I’m publishing quotes to Instagram, writing articles on my websites, or building out entire publishing platforms for Black folks to tell their stories, I’m doing this for the love of people who have been rendered disposable through prisons, policing, and more,” she said. “I’m doing this in hopes that maybe, with enough story, we can transform the global stories power has created about us. Maybe, with enough stories, we can take our freedom.” One of many questions that brown asks in We Will Not Cancel Us is whether we can be abolitionists with one another. We can’t hope to create life-affirming systems after abolishing harmful, decaying systems if we have yet to address how those systems live within us. We must embrace the idea that all human beings are valuable and that we all deserve to live in safe spaces. We must fully understand that we can’t hope to stop harm and abuse by enacting harm and abuse. We must abandon our shortsighted, binary thinking around what is good and what is bad.

As Keene said, “Start on your block. Start thinking about your personal relationships and daily interactions.” Keene encourages us to ask ourselves whether the ways we handle harm or conflict reflect carceral conditioning: If you have conflict on your block, are you looking for ways to engage as a community member or are you trying to find out who to call to make a report? “Because of how we’ve been conditioned in this country, a lot of times we have an automatic reaction to seek authority to hand out punishment,” she said. “Start with decreasing your carceral responses to everyday inconveniences.” And most of all, we must remember that the road towards PIC abolition is long and that it begins with more conversations about a future world than conversations about the world we’re working to leave behind. In the words of writer Arundhati Roy, “Another world is not only possible, she is on her way. On a quiet day, I can hear her breathing.”

For more information on PIC abolition, listen to the Justice in America podcast. Read Angela Y. Davis’s recent piece in Level about why arguments against abolition fail, and read human rights attorney Derecka Purnell’s piece in the Atlantic about how she became an abolitionist. And share your thoughts about PIC abolition with me on Twitter. I’m @jonubian.