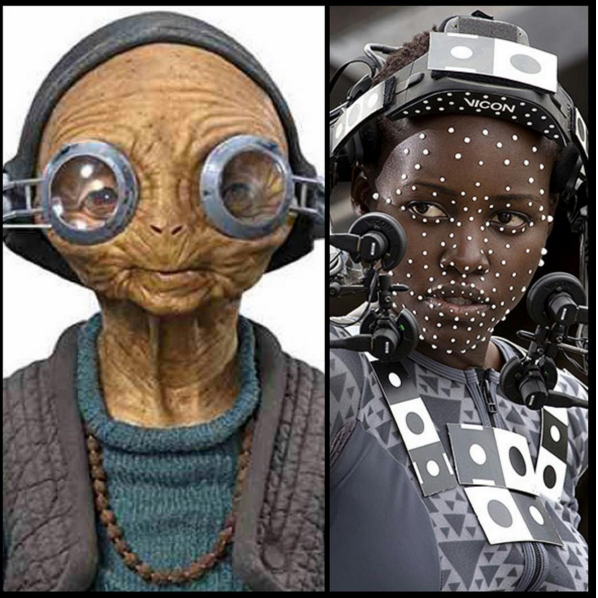 Fans of Lupita Nyong’o were psyched when she announced last year that she’d been cast as a central character in the new Star Wars film, The Force Awakens. But many fans were frustrated to later learn that Nyong’o wouldn’t be appearing onscreen as herself—instead she’d be voicing an entirely CGI character.

As the powerful, 1000-year-old space pirate Maz Kanata, Nyong’o extolls some much-needed wisdom in the new film, but moviegoers don’t actually get to see her onscreen. Jamie Broadnax of Black Girl Nerds summed up many fans’ feelings when she wrote:

“I can’t help but wonder why there is such a large disparity when it comes to imagery of Black women in science fiction?  Most importantly, why cast an Oscar-winning actress with an extraordinary amount of notoriety, who is the face of Lancôme–a massive international cosmetics company–in a role where we never see her in physical form?”

This week, Nyong’o herself shed some light on the casting. Nyong’o told Buzzfeed News that she selected the entirely CGI role, the first part she chose after winning an Oscar for role in 12 Years a Slave,  partly because she liked the idea of not having her body seen onscreen. In 12 Years a Slave, her performance was extremely physical and visceral—her character Patsey was whipped, raped, and otherwise brutally abused. “12 Years a Slave was a film that was so much about my body, and Star Wars is not at all,” Nyong’o told Buzzfeed. “There was a liberation in being able to play in a medium where my body was not the thing in question.”

Having Nyong’o involved in the film—even if she’s not actually seen onscreen—has been important for many audiences. Writer TK Matunda reflected on how her mom, a Kenyan immigrant to Canada, became excited about Star Wars for the first time in her life after hearing about the casting of Nyong’o and co-star John Boyega. “Both are Black, but—more importantly to my mom—they are both of African descent,” wrote Matunda. “John is a first-generation Brit, born in London to Nigerian parents and Lupita was born in Mexico to Kenyan parents. Seeing those two in one film is cause for celebration for my mom.”

Relevant: Why Disability Rights Advocates Are Calling Out “Me Before You” as a Hot Mess

by s.e. smith
The disability community is rightfully furious about the dangerous message this film sends to viewers.