Magical Thinking: The Media’s Disturbing Portrayal of Katinka Hosszu’s Relationship with Her Husband and Coach 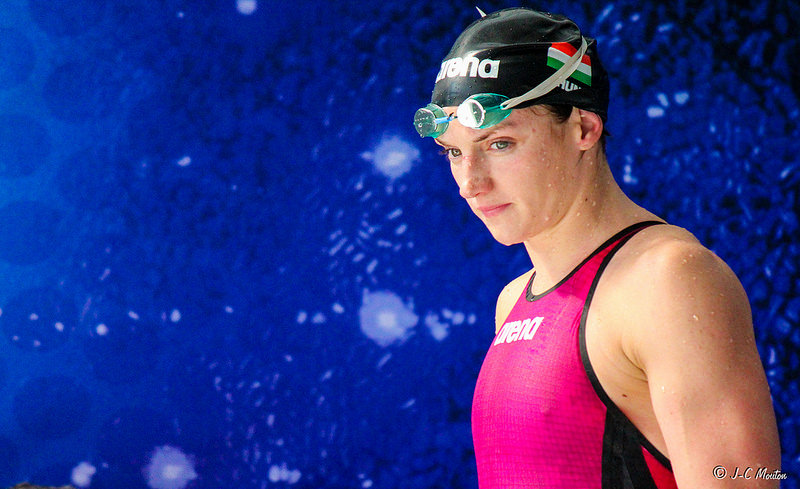 On Saturday night, I watched Hungarian swimmer Katinka Hosszu win a gold medal and break a world record in the 400-meter individual medley. I don’t usually watch the Olympics; the nationalism weirds me out, and I’ve never been particularly into sports, but I was at a friend’s house and watching the Olympics seemed like a sociable thing to do. I felt the pull of nostalgia as soon as the familiar events came on, remembering summers throughout my youth spent parked on a couch in my parents’ living room, watching world-class athletes push their bodies beyond imaginable limits.

“Watch for her husband,” my friend said to me.

“He’s just really intense,” she explained. “He gets really excited when she does well, and he, like, freaks out when she loses. Just watch. They’ll show it.”

So I watched. I watched as Hosszu outstripped her competitors by what felt like miles, remaining consistently ahead of the moving yellow line that marked the current world record for all eight of her laps. I watched as the camera flicked to her husband, Shane Tusup, showing him pacing and grinning with his tiny ponytail and gold cross necklace. When Hosszu raised her hands in the air, celebrating her victory, I admired her broad shoulders and her muscular arms. And I watched as  NBC sports commentator Dan Hicks all but gave credit to Hosszu’s husband for her win.

“And there’s the guy responsible,” he said, “for turning Katinka Hosszu, his wife, into a whole different swimmer.”

NBC sports commentators have been criticized for several other gaffes in the past few days that all display a traditional and conservative approach to gender and relationships. On Tuesday, Chris Marlowe referred to Brazilian beach volleyball player Larissa Franca’s wife as her “husband,” and on Monday, gymnastics announcer Al Trautwig insisted on identifying Simone Biles’s parents as her adoptive parents, later doubling down with a tweet that stated they “may be mom and dad but they are NOT her parents.” Trautwig has also been criticized for mixing up Biles and Gabby Douglas, who are both Black.

Later, Hicks defended his comments, saying, “It is impossible to tell Katinka’s story accurately without giving appropriate credit to Shane, and that’s what I was trying to do.”

Read This Next: In “Suicide Squad,” Harley Quinn and The Joker’s Relationship Isn’t Love-It’s Abuse
Read This Next: As They Head to the Olympics, the Women’s Soccer is Fighting to Win Equal Pay

In the moment, though, I was confused. What was Hicks talking about? Even if Tusup were the best coach in the world, he wasn’t in the pool. Hosszu had just propelled herself through the water with her strength, her skill, her passion—Tusup didn’t do that. Now I was annoyed—and intrigued. Why so much focus on him? Was he very famous? A former Olympic athlete himself?

He wasn’t. It turns out, though, that people were already taking an interest in Hosszu’s relationship with her husband. In a New York Times piece published last week, Karen Crouse examined their marital and professional relationship in depth, scrutinizing its intensity and citing the concerns of some of Hosszu’s fellow athletes and former trainers that there may be abusive dynamics at play.

The piece gives more of an impression of morbid fascination than anything else, like watching an angry parent yell at their child in public and making sure not to look at them even though you’re listening closely. It’s somewhat unclear whether the writer is trying to draw attention to the disturbing aspects of a potentially abusive relationship or is simply describing how unique and unusual their connection is. In the same piece, she writes, “Tusup is more temperamental than Hosszu, and his eruptions on the pool deck have elicited stares, complaints, and calls for his removal,” and “When Hosszu and Tusup married in 2013, it was as if their strengths became one.” Wait, what are his strengths again? The article doesn’t really present compelling evidence of them, except the fact that he’s American and approaches Hosszu’s swimming career with the brusque entitlement, blind confidence, and aptitude for monetization that Americans consider their birthright.

Early in the piece, Crouse acknowledges that Hosszu was already a better athlete than Tusup ever was before he started coaching her, saying, “Hosszu was already a world champion when Tusup, a national-caliber backstroker at his peak, took over her training.” But later in the article, she too seems to credit Tusup with Hosszu’s success, writing, “In 2012, she was not among the top-ranked swimmers in the 100 or the 200. Four years later, she is an Olympic medal contender in both events. ‘Shane helped me find my technique,’ Hosszu said.”

The article cites conflicting views of their relationship from others in the swimming community. Hosszu’s former coach at University of Southern California, Dave Salo, said, “‘I think the biggest issue with her is her husband…I think you have to look at her motivation. Is it fear or confidence that is driving her?’” Fellow Olympic swimmer Jessica Hardy, who calls Tusup’s behavior “inappropriate” and “scary,” is also described by Crouse as “[marveling] at her transformation”:

“The first practice after the London Olympics, less than three weeks after the Olympics, she came back, and she had been training with Shane already, and I saw a different Katinka,” Hardy said. “More fit and more in shape.”

Hardy added, “She worked hard before, but she wasn’t as motivated as she is now.”

Tusup was the catalyst. He saw Hosszu as the Iron Lady before she did.

Crouse seems to fall into the same pattern as Hicks, attributing Hosszu’s success and improvement to Tusup’s coaching and encouragement—perhaps because the draw of a magical coaching relationship with an inspirational narrative arc, the stuff that Hilary Swank’s Next Karate Kid dreams are made of, is just too difficult to resist. And with an element of romance added too? Who could look away?

Read This Next: In “Suicide Squad,” Harley Quinn and The Joker’s Relationship Isn’t Love-It’s Abuse
Read This Next: As They Head to the Olympics, the Women’s Soccer is Fighting to Win Equal Pay