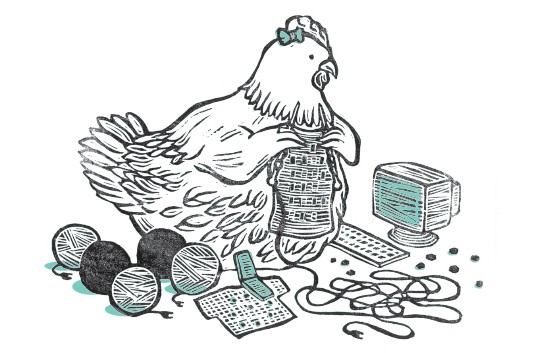 Wearable technology may feel like science fiction, but it's actually becoming a reality right before our eyes. Law enforcement, the military, and the medical industry have long sought ways to integrate technology with clothing to augment health and personal safety. More recently, high fashion has started swooning over the possibilities of techy dressing: The artsy Rodarte label debuted LED-embedded glowing heels at Fashion Week earlier this year. Lady Gaga recently performed in a gown with a moving skirt and headpiece that she called a “living dress.” And Katy Perry made headlines when she showed up at the Metropolitan Museum's Costume Institute Gala in an, a London-based technology fashion company.

Everyday consumers are next. Some of the efforts to bring smart clothing to market—such as the No-Contact Jacket, a “defensive jacket” developed in 2003 to protect women from street violence—aren't here yet; others, like the Nike sneakers with sensors that wirelessly sync with an iPod or iPhone to control song selection and display workout information such as time, distance, pace, and calories burned, are becoming commonplace.

A growing community of crafters, designers, and students are making their own fashion technology creations—and they believe that “tech crafting” may just be the key to getting more women and girls involved in technology. Tech crafting combines electronic circuitry with sewing or handwork to produce wearable (or “soft”) technologies. Projects range from a handbag that lights up when your cell phone receives a call to “socially interactive” clothing such as a hoodie that lets you display your mood with ambient lights on the sleeve. The tech-crafting community has expanded rapidly in the past two years to include numerous blogs and websites dedicated to sharing projects, such as Fashioning Technology, Switch, electricfoxy, and talk2myshirt.com. Thanks to such DIY efforts, manufacturers are starting to make conductive threads and e-textile tools like the LilyPad Arduino, a microcontroller board specifically designed to be sewn into textiles and wearables, more readily available.

Syuzi Pakhchyan and Alison Lewis are two tech crafters who want to get these tools into the hands of more women and girls specifically. The pair convened a dialogue at 2010's SXSW Interactive Festival that drew a crowd of parents, educators, and industry professionals eager to use fashion technology to hook girls—who are generally less likely than boys to be urged toward computers and mechanics—into a more tech-focused future.

Pakhchyan, the creator of the online smart- crafting community SparkLab and the author of Fashioning Technology: A DIY Intro to Smart Crafting, came face-to-face with the challenges of engaging girls with technology when she was in graduate school and teaching a robotics class for children. The class, she recalls, mostly comprised boys who “just loved building BattleBots. But none of the girls were really that interested in building BattleBots, so it became this struggle to keep them engaged. I wondered if it was purely context, because the girls at that age were actually much better programmers than the boys.” Pakhchyan sees fashion and crafts that emphasize social or creative expression as critical teaching tools for girls, noting that tech craft “could become [a] context for getting them interested in electronics and computation.” Efforts to get more girls and women involved in tech are taking on a new sense of urgency these days. According to statistics compiled by the National Center for Women and Information Technology, only 18 percent of all computer science degrees earned in 2008 were earned by women, down from 37 percent in 1985. And while more than half of all professional occupations are held by women, only 25 percent of computing-related professions are—and women are executives at only 11 percent of Fortune 500 technology companies. Additionally, only a very small percentage of women working in technology professions are African-American, Latina, or Asian.

As you might guess, this shortage of female representation in the technology workforce has its roots in early childhood and educational experiences. A recent report published by the Anita Borg Institute for Women and Technology, the Computer Science Teachers Association, and the University of Arizona concluded that girls turn away from science and math as early as elementary school because of limited exposure, discouragement from parents, and a lack of interest.

And mass media doesn't help. The long-established cultural attitudes about technology and gender were front and center in Verizon's notorious 2009 tough-guy ad campaign for the Droid phone. The commercial asked, “Should a phone be pretty?” and went on to emphasize the power and manliness of its phone by characterizing the competing iPhone as a “tiara-wearing, digitally clueless beauty-pageant queen.” The final moments of the spot show a woman applying lipstick as a voiceover asserts that the Droid “trades hairdo for can-do.”

The ad generated criticism from both technology and feminist blogs, but its central assertion about the Droid, that “It's not a princess, it's a robot,” served as a useful reminder of how hardwired gender stereotypes about technology, power, and intelligence still exist in our culture.

It's this social coding of technology as default male that inspired designer and producer Alison Lewis to, like Pakhchyan, embrace fashion and tech crafting as a way to get girls past the boys'-club barrier. Her book, Switch Craft: Battery-Powered Crafts to Make and Sew, as well as her blog, Switch, is aimed at showcasing innovative design and fashion from what she sees as a distinctly feminine, craft-inspired perspective. “Fashion and design and craft can be the right language…to ignite the initial spark.  Once that spark has been ignited, and girls and women become interested, they're fine,” she says.

Lewis has quickly become a leading voice in both the technology and fashion communities, and was named one of Fast Company's Most Influential Women in Technology 2010. She asserts, “Women don't need help. There's nothing wrong with our learning capabilities. We just need to know socially that [technology] is an option, and it doesn't feel that way right now.”

Tech crafting's girlcentric reframing of technology, and its message that women can have their hairdo and their digital can-do, was embraced by the numerous female engineers and girl geeks who got out the vote in 2009 when Mattel posted an online poll, urging users to choose Barbie's next career. As a result of their efforts, the 125th doll in the Barbie “I Can Be…” collection is a computer engineer. The Society of Women Engineers and the National Academy of Engineering even contributed to the development of Barbie's clothes and accessories. According to Mattel, “this digital diva engineers the perfect geek-chic look, with hot pink accessories and sleek gadgets to match.”

A girlcentric approach is also the strategy used by Girlstart, an Austin-based nonprofit that offers a variety of science, math, and technology education programs in a female-friendly environment. By offering hands-on, girls-only camps and workshops, female role models, and style-conscious programs (Web Divas Club and Designer Paradise, among others), Girlstart attempts to reframe engineering as a cool and fun activity for girls interested in diverse subjects and hobbies. And many local organizations and programs that are part of the National Girls Collaborative Project, an initiative designed to foster collaboration among organizations promoting science, technology, engineering, and math (also known as STEM) careers to girls, have started to use a similar approach, offering girls-only clubs that focus on exploring technology through hobbies that girls are already engaged in.

But while tech crafting and girlcentric offerings may offer welcome alternatives to BattleBot building, they do little to ameliorate existing gender stereotypes around technology. In fact, much like Computer Engineer Barbie and her pink gadgets, they may actually reinforce a few. The downside of the tech-crafting push is that it risks ascribing women's interest in technology to the domains of fashion and craft, and may inadvertently support the gender divide at the heart of the problem it seeks to help overcome. Both Pakhchyan and Lewis assert that theirs is a pragmatic approach, one that engages girls and women who are already interested in fashion, crafting, and socializing with friends to simply add more electronic, computerized facets. Pakhchyan is quick to point out the double standard at work in the criticism that a fashion platform is limiting for girls. “[Boys] become engineers of other stuff—they don't just engineer BattleBots,” she notes. “To say that girls, because they're engineering socially interactive garments, are going to grow up engineering only socially interactive garments [is inaccurate].”

In fact, it would be pretty awesome to train a generation of girls who could engineer socially interactive garments. Fashion is but one type of design that is evolving to incorporate technology, which will require a change in the way that goods are developed and manufactured. Engineering and computer science will only continue to become more integral to every aspect of our lives, including the clothes we wear and the devices we carry. That's to say nothing about the way technology drives advances in the industrial and medical sectors: From a big-picture perspective, tech crafting is a promising method for developing transferable engineering and computational skills that cut across industries. As Lewis notes, “There are so many things made for us as women. [Yet] so few of us have an actual ability to control what is made for us, and have a say of how it's designed from a technological level.” No doubt we need better choices than BattleBots vs. Barbies, but encouraging women to visualize themselves as innovators is definitely a step in the right direction.

Tammy Oler is a frequent contributor to Bitch who looks forward to the time when everyone will be wearing socially interactive garments on the subway. Find her at www.tammyoler.com.

As someone who had never heard of the technological fashion movement before, I found this piece informative and its subject fascinating and bizarre. Thanks!

One of the best pieces written about women and girls in STEM I've read in a long time! Way to go and actually show the trade-offs inherent in encouraging women into engineering through traditionally "feminine" arenas like crafting and fashion. I love the quotes from Pakhchyan! 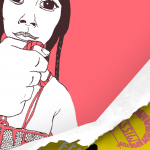 by Lindsay Zoladz
Indeed, the word’s inherent power has made it the subject of a long-running feminist reclamation effort.