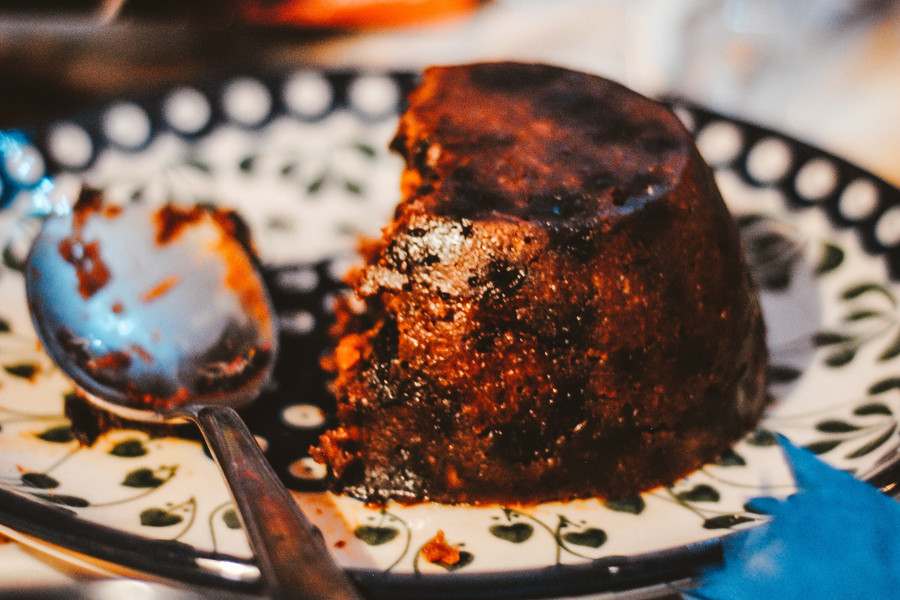 In half a minute Mrs. Cratchit entered—flushed, but smiling proudly—with the pudding, … Oh, what a wonderful pudding!” — A Christmas Carol by Charles Dickens.

Unlike me, I’m pretty sure that neither Mrs. Cratchit nor my Nana ever said “fuck” when they made their Christmas puddings. If they swore at all, it was probably something very stoic and British like “blast!” Nana gave me her Christmas pudding recipe nearly 20 years ago, when I was moving to America and sure I’d have lots of opportunities to delight new friends with the hearty British recipes I’d inherited.

Nana’s puddings were a longstanding tradition in our family: As a child, receiving the pudding about a month before Christmas was all part of the the holiday excitement. When the ceramic pot arrived, covered in grease-proof paper and tied with string, it was like opening the first door of an advent calendar—the season, with all its glorious magic, had arrived. Time passed and the recipe stayed pasted neatly, unmade, in my recipe book, but when Nana developed Alzheimer’s around 2010, the era of the Christmas puddings also came to an end. She died in 2017.

I never tried to recreate her pudding recipe while she was alive. But in November, as the holiday season began tugging on my heartstrings, I finally pulled out the recipe. I immediately noticed that underneath the printed recipe name (“Old fashioned Christmas pudding”) there was a phrase written in Nana’s neat cursive: “Really good.” I felt a pinch in my heart; this was a promising start. But the optimistic feeling of partaking in a joyful familial tradition didn’t last once I realized that the recipe’s 20 ingredients, perhaps plentiful and much easier to find in 18th-century (or even 1980s) England were going to be a challenge to find in the present-day United States.

Half a pound of suet. What the fuck? Where am I going to find suet? Suet is the raw, hard fat found around the loins and kidneys of cows and sheep. Look it up if you dare; it’s not for the faint of heart, seeing as though its the visual equivalent of a block of pure cholesterol. In the days of old England, it was easy to locate and more cost-effective than fats like butter, but it isn’t generally sold at your neighborhood grocery store’s butcher counter.

Candied peel. A quick internet search lets me know that candied peel requires a whole recipe of its own that Nana didn’t include in her book. As it turns out, it’s possible to buy almost anything online, so two weeks, three shopping trips, and four Amazon deliveries later, I have all the ingredients.

8 ounces of self-raising flour (I made my own by adding 1 teaspoon of salt and 1.5 teaspoons of baking powder to all-purpose flour.)

12 ounces of sultanas (I eventually discover that sultanas are called golden raisins in the United States.)

2 ounces of candied peel (bought by the pound from a seller in Florida through Amazon, so hopefully it freezes well and can be used for future puddings.)

8 ounces of suet (I opted for the vegetarian version—still pure fat, but no animal kidneys or loins involved.)

Though it took some searching and ingenuity, I still had it easy. Nana and Mrs. Cratchit didn’t have Amazon Prime or a grocery store in easy driving distance. It’s now after Thanksgiving and I’m running out of time to give the pudding its traditional month of “ripening,” when the spices and alcohol work together to enrich the flavor. In Victorian England, the fifth Sunday before Christmas became known as “stir up Sunday”—the day to righteously prepare the family pudding, taking inspiration from the Collect in the Book of Common Prayer: “Stir up, we beseech thee, oh Lord, the wills of thy faithful people; that they, plenteously bringing forth the fruit of good works…”

Making a pudding wasn’t just a family tradition but part of your godly duty. That’s a lot of pressure on Mrs. Cratchit.

Put the suet, breadcrumbs, and flour into a large mixing bowl, says the recipe. It says large. Not enormous. After a lot of measuring and grating (in which part of my knuckle sloughs off into the mix—blast!), I find a flaw in the method. A Christmas pudding recipe, meant for large family gatherings and royal feasts, feeds a lot. My recipe makes one four-pound pudding; that’s the size of a basketball, capable of feeding about 30 people. I don’t have a bowl big enough. The pudding is now a fucking multiple-bowl event.

Stirring it, the recipe tells me, should be something shared by the family, everyone taking a turn and making a wish. This quaint tradition was likely invented by the poor wife or cook, because stirring these things is a workout. It’s been three hours, I’m just about done with the combining, and I’m wondering what I’ve gotten myself into. Making Christmas pudding is turning out to be like childbirth or menopause—one of those things women don’t talk about, and when you get there yourself, you realize that it would’ve been great for someone to have mentioned  incontinence, vaginal dryness, or the need for inordinate upper body strength. I’m exhausted, and all I have to show for it is a sludgy, light-brown mixture speckled with currants and raisins. Into the fridge it goes for the night, to allow the dry ingredients to soak up the copious amounts of brandy and stout.

The next day, the slightly browner and firmer stodge goes into pudding steamers. This would be the time to observe the tradition of adding a few extras to the mixture, such as a coin to portend wealth to the finder (hopefully enough to cover the dentist visit that might ensue). I remember the anticipation of discovering who found the coin in their bowl of pudding and do a bit of research to see if I can pull something together. I learn that a thimble was the most dreaded pudding charm to receive because it meant certain spinsterhood. In the 18th century, Christmas puddings were the dessert equivalent of Russian roulette for every unmarried woman at the table. There would be no fucking charms in my pudding.

To steam a four-pound pudding takes eight hours. Christmas puddings were easier to prepare in the past because they didn’t require an oven, something that the majority of the population didn’t have. However, this still means that some poor soul—more than likely, some poor female soul—had to stand over a steaming pot, stoking the fire all day. And god help her if the pot boiled dry because she would have wasted a week’s worth of groceries (probably docked from her wages if she was a servant); she’d also be damned for ruining the ”good works” mentioned in the Book of Common Prayer. And, of course, she’d have ruined Christmas. I have to sit down for a moment. Making a Christmas pudding may have been festive and fun for my ancestors, but I realize now it was also a sentence of sorts. They had no choice but to make this traditional dish, unless their utter poverty made the choice for them.

Looking at the puddings now, I wondered if the spiced contents are like the pomp of the British empire: something seemingly rich and decadent, but actually only there to legitimize and gloss over a shameful patriarchal history.

And then I think about Nana. She’d never had a paying job; she was the quintessential 1950s housewife of bygone pop-culture imagery. She married a domineering man who belittled her often in front of her family and expected her to cook and clean for him. In contrast, I left my abusive first husband and am now happily married to my second, who does all the cooking. Why did Nana make these puddings every year? Did she do it to fill the time? Because her mother and grandmother did it before her? Because Granddad wanted her to? It would have taken her days to steam enough puddings for her extended family, but she would still rustle them up every year without any mention of the sheer determination it takes to make them.

I stand over the stove and inhale the pudding’s aroma—dark and fruity, with a hint of cloves and brandy. While researching the charms, I’d read that Christmas puddings were at one point used as a propaganda tool for consolidating the British empire, with ingredients from every country in the commonwealth being used in the recipe. Looking at the puddings now, I wondered if the spiced contents are like the pomp of the British empire: something seemingly rich and decadent, but actually only there to legitimize and gloss over a shameful patriarchal history.

On Christmas day, I steam the pudding for four more hours, carefully monitoring it in between topping up my guests’ glasses and passing a tray of homemade British sausage rolls. I’m celebrating with members of my chosen family with roots in different parts of the world—Haiti, Cuba, Italy, and the United States—and after a turkey dinner cooked by my husband, I ceremoniously pour a good helping of brandy over the pudding, top it with a sprig of holly for good luck, and set it on fire. The flame supposedly represents the passion of Christ, but who doesn’t like a bit of theatrics at the dinner table as long as there’s a fire extinguisher handy? And besides, Oliver Cromwell once banned Christmas puddings because he thought the fire was too reminiscent of England’s pagan winter solstice celebrations, so there’s something for everyone.

My guests marvel at the flickering blue-yellow flame and then at the moist, rich spice and boozy fruit flavor, softened only slightly by a dribble of double cream. Another pudding goes to a British friend who lives nearby to share with her family on Christmas day: “It was perfect,” she says. “Please make it again next year and don’t change a thing.” I’ll never know with certainty why Nana made Christmas pudding every year. Never having the opportunity to have that conversation with her while she was alive will always be something I regret. But I hope that she made them because she enjoyed the cooking, the sharing, the giving, and the love. When I choose to make them again next year, that will be the why for me too. 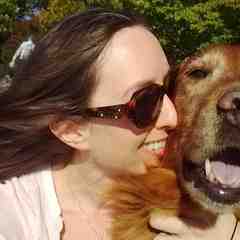 Rebecca Houghton is a writer of personal essays and fiction and a passionate advocate of women’s rights. Born in England, she emigrated to the United States in 2003 and is now based in Seattle. She has previously published work on surviving domestic violence in Role Reboot and frequently speaks and testifies, sharing her story as a survivor, in support of domestic violence survivors and to progress gender equity. Find her on Instagram @BxHoughton.