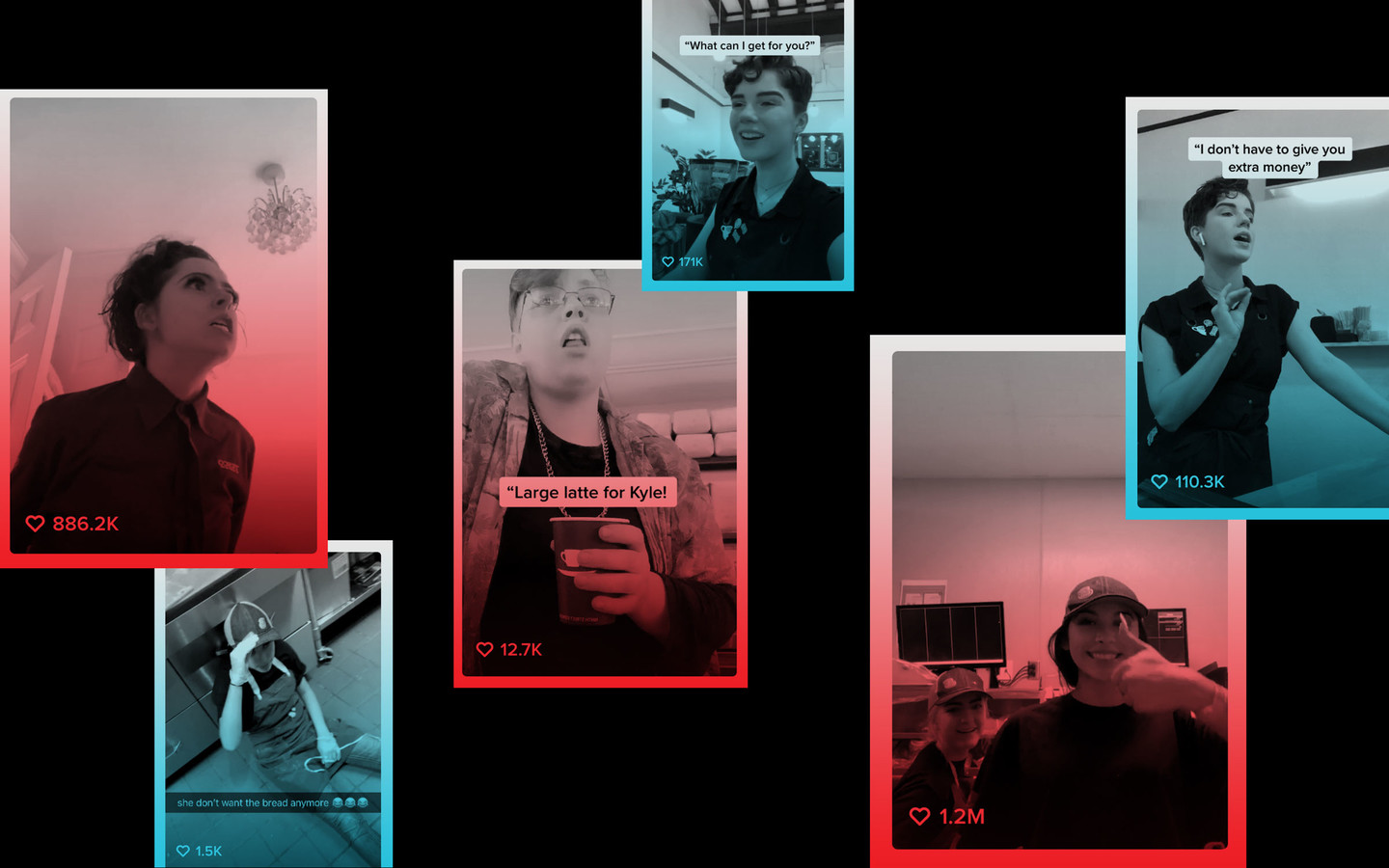 Jade Pinner (@jadewhataboutit on TikTok), 19, is getting ready for work, buttoning her blue uniform shirt with a corporate logo on it and tucking it into her black pants. Her hair is in a messy bun and her fake eyelashes have seen better days, but she’s still speaking to her phone’s camera. “Girls, I’m not gonna lie to you. I’ve had no sleep and I’m working till 10 tonight,” she says, before screaming in despair and then murmuring, “I feel like killing myself.” Pinner then pretends to be speaking to a customer: “Yes! I can show you where this is! Aisle 22.” Pinner raises her voice with each word before finally saying, “Why don’t you look at what it says on the fucking board instead of asking me what aisle butter is in?”

Pinner’s skit went viral in September 2019, getting more than 400,000 views on Twitter and more than 2 million on TikTok. Beyond the momentary fame the video brought Pinner, the clip became part of a bigger TikTok trend where customer-service workers create short videos that detail their day-to-day experiences, including reenacting their interactions with customers, telling stories about their coworkers and bosses, and sharing moments of joy. Often, these videos collapse the wall between customers and service workers to reveal how essential emotional labor is to working in retail.

Sociologist Arlie Russell Hochschild coined the term “emotional labor” in her 1983 book, The Managed Heart: Commercialization of Human Feeling, to specifically refer to customer-service workers having to display the “correct” emotion to their customers, bosses, and coworkers. “Between the extremes of flight attendant and bill collector lie many jobs that call for emotional labor,” Hochschild wrote. “Jobs of this type have three characteristics in common. First, they require face-to-face or voice-to-voice contact with the public. Second, they require the worker to produce an emotional state in another person—gratitude or fear, for example. Third, they allow the employer, through training and supervision, to exercise a degree of control over the emotional activities of employees.”

Though the term “emotional labor” has been used to describe everything from remembering birthdays to educating men on feminism, it can also be applied to the content customer-service workers are posting on TikTok. In her skit, Pinner conveys the emotions she wants to be able to show (annoyance, despair, anger) alongside the emotions she’s expected to show (helpfulness, happiness, sweetness). Hochschild originally argued that customer-service workers become estranged from their own feelings in the workplace, thanks to emoting becoming entangled with the need to provide a service. TikTokers are offering an alternative to Hochschild’s theory, producing videos that show how aware they are of the emotional work they’re putting in and the feelings they’re forced to suppress.

Morgan Eckroth (@morgandrinkscoffee on TikTok and Instagram), 21, has been making content about being a barista since July. Though she refuses to reveal the name of the coffee shop, her content—which has amassed more than 2 million views—ranges from latte-art tutorials to re-creations of interactions with customers set to Vivaldi’s “Winter.” Her customer-service reenactments, in particular, dramatize her frustrations with everything from customers being unclear in their orders to those who insist on drinking their beverages inside the shop five minutes before closing. Eckroth, who is finishing her bachelor’s of science in marketing at Oregon State University, sees a lot of value in finding comedy in her job. “I’ve received a lot of support from other workers in similar jobs, which has been amazing,” she says. “It shows that we’re all trying to do our best and are in it together. Much of TikTok’s primary demographic is young adults like me who work in food and customer service, so there’s a lot of camaraderie.”

Making these kinds of behind-the-scenes videos can also be very risky. Brianna Ramirez (@BriiRamirezz on Twitter) lost her job at Panera Bread for posting a video about how the restaurant’s macaroni and cheese is made. “There was no wrongful termination,” Ramirez tweeted on October 14, 2019. “Having such long nails and my phone out is a risk to food safety and health regulations. Everything was completely justified. I made a mistake and I’ve learned from it. I will always love Panera and their food.”

Though the term “emotional labor” has been used to describe everything from remembering birthdays to educating men on feminism, it can also be applied to the content customer-service workers are posting on TikTok.

At least 41 percent of TikTok users are between the ages of 16 and 24, which might explain the sheer volume of videos about working in customer service. The platform’s age demographic might also explain the amount of content that exists simply to put older people on blast. There’s “Karen,” a catch-all fictional character who represents the middle-class, mom-type white woman who’s always asking for a manager. There’s no clear origin for the Karen meme since there have been several iterations across multiple social-media platforms, but on TikTok, the punch line always revolves around Karen asking for the manager after any mild inconvenience. “Excuse me,” says a Karen in a skit that has more than 500,000 views. “Is my grande extra-hot Americano with sugar and vanilla on the way? Because I’ve been waiting for five minutes.”

Similarly, the phrase “OK Boomer” is often used as an (ageist) response to annoying or disrespectful behavior that TikTokers attribute to Baby Boomers. For instance, there’s a skit where a boomer says to a worker that she will “never get a job with all those tattoos.” The video has a homemade electric track playing over it, with an auto-tuned voice saying, “This goes out to all the [over] 65 crowd on SoundCloud…yeah, old ladies suck,” before the beat drops, and the punch line “OK Boomer!” is delivered in an enraged voice. The worker forces a confused smile at the irony of being told this at their actual workplace. Though young people are justifiably frustrated with some people’s behavior, the inequality and cruelty of customer-service jobs calls for a deeper class analysis.

Leanna Renee (@Leannuh47 on TikTok and Instagram), 29, has been working in customer service for 12 years and says she has gotten some negative responses to her content about bad customers. But for her, these videos serve as a coping mechanism in a low-paid, dehumanizing job that can worsen the mental health of workers. Abusive behavior from customers can take a psychological and emotional toll on customer-service workers; this can impact their personal lives, which only worsens their mental health. Additionally, several studies have indicated that being paid minimum wage can cause anxiety about financial instability and even impact the children of minimum-wage workers. “I’m happy to shame bad customers because I know how abusive these jobs can be, and there aren’t enough advocates for us out there,” Renee says. “I watch my coworkers struggle with their mental health daily because of how we’re treated by customers. I know there are hundreds of thousands of us—if not millions—experiencing the same and worse constantly. It’s not just about minimum wage; it’s about treating other humans well.”

This TikTok trend comes at a time when the idea of a living wage—or a minimum income necessary for a worker to meet their basic needs—for all workers has become a major talking point in the Democratic primaries. Elizabeth Warren, Bernie Sanders, and even Joe Biden have endorsed the $15-per-hour living wage, though the actual living wage would vary, depending on the cost of living in each state. On TikTok, the idea of a living wage comes through skits that expose the value of customer service and the parties who are complicit in undervaluing the profession. “We’re obliterating the idea that the customer is always right,” Renee says. “It’s simply not true. The customer is often wrong, because workers are trained to know more than them. But that phrase has exaggerated a lot of customers’ sense of entitlement and that’s reflected in how they treat us. Whether they are rich or poor, customers in this day and age are so ready to treat customer-service workers like crap because they want what they want when and how they want it, and there’s no consideration beyond that.”

In a November 2018 interview with the Atlantic, Hochschild critiqued how the concept of “emotional labor” has been co-opted and stripped of social-class perspective. “One thing that I read said even the work of calling the maid to clean the bathtub is too much. It’s burdensome. I felt there is really, in this work, no social-class perspective,” she said. “There are many more maids than there are people who find it burdensome to pick up the telephone to ask them to clean your tub.”

Customer-service workers on TikTok are challenging the idea that their jobs are low skill and not inherently worthy of a living wage. Their skits on how they perform emotional labor forces the concept to be returned to conversations around the workplace and class—as suggested by Hoschchild—emphasizing that this work has value and should be treated as such. This type of content urges society to redefine what work is considered valuable, and consequently, how society treats people who are not valued for their labor. Customer-service workers are sick of being abused and devalued, and while their skits are funny, they’re also communicating a shift that needs to happen in a society that prides itself as progressive.