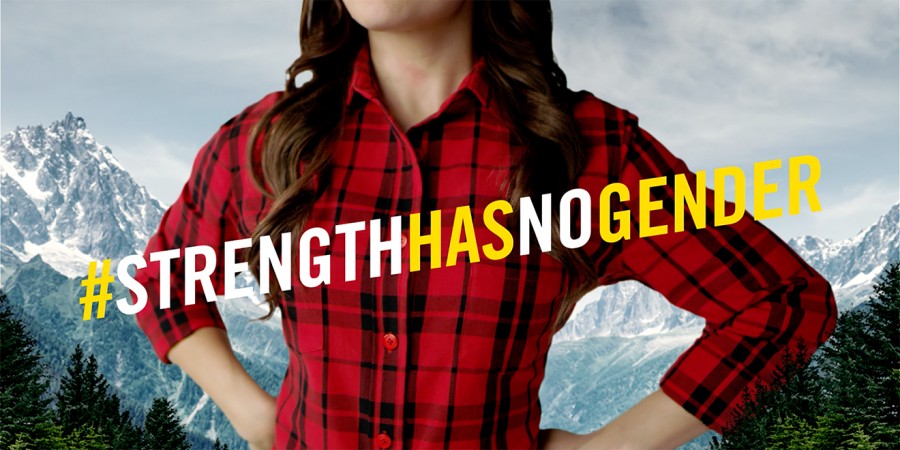 Happy Women’s History Month, a time each year when we celebrate and honor all the female and female-identified folks who have agitated for our rights and fought for their own over the decades. It’s a magical time, a time when we can can log on to the internet and read 11 of Emma Watson’s most powerful quotes about feminism, download an app that works with Google to alert you to significant locations in women’s history, and revel in the carefully curated womanity of HBO’s March lineup.

Also, because Women’s History Month is basically the Super Bowl of marketplace feminism, you can buy stuff. A lot of stuff. All kinds of stuff. You can buy a print from LIFE magazine’s archive for $74.95—perhaps one of Grace Kelly and Audrey Hepburn at the 1956 Oscars? You will certainly want to change your Facebook profile picture to one of a historical woman, at least for a month. You can even buy paper towels from Brawny that feature a female “mascot” on the packaging, exclusively at Walmart. Ladies, this truly is our month.

I know about some of this stuff because since January, my inbox has been brimming with press releases for female-specific products and services described with one or more of the following terms: “revolution,” “empowering,” “strong,” “confident,” and “kickass.” If it’s a day ending in “y,” I’ve got a perky email about a beauty, fashion, or lifestyle product invented or brought to market by women.

Take Bosom Couture Boob Glue, a company that believes a woman can do anything as long as she’s got a reliable way to firmly adhere her breasts to her clothing. Boob Couture’s website enthuses that, “Through women ‘supporting’ women by encouraging them to love who they are, believe in themselves and follow their dreams, the brand lifts a woman up to her fullest potential, helping to boost confidence both inside and out.” (I see what you did there with “supporting,” Boob Couture.)

Then there’s Beautiful Rights, a new company founded to capitalize on post-election female resistance—er, sorry, to celebrate women via lipstick with names like “Gloss Ceiling,” “Pantsuit Pink,” and “Politically Pout.” 20 percent of all sales go to women’s organizations; the brand’s mission, as stated on its website, is “we believe in beauty that inspires, empowers, and challenges the status quo.” How does it challenge the status quo? I wondered the same thing, so I emailed the PR representative to ask. (Her reply: “The brand donates 20 percent of sales to organizations that support woman’s rights. We made Pantsuit Pink the official lip color of the woman’s march on Washington.”) 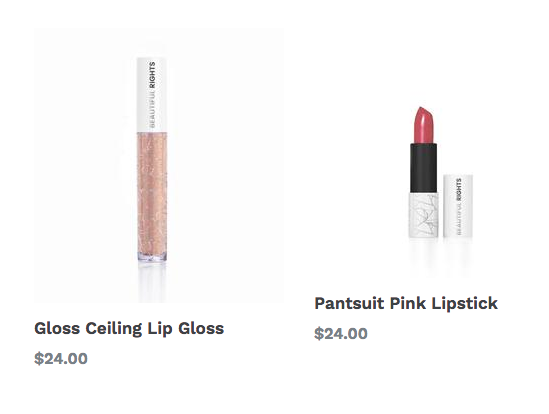 Women’s History Month (until 1987 it was Women’s History Week, and you can thank the National Women’s History Project for the eventual upgrade) has long been a way that schools, libraries, and other cultural institutions have highlighted the lives and the work of women whose contributions were undersung, if not erased entirely. But in recent years, as feminism has surfaced in commercial and celebrity culture as an approachable trend, Women’s History Month has become a way to shift common sales pitches to women as matters of elevated importance: You’re not just buying lipstick, you’re honoring a legacy of women before you who would absolutely, definitely want you to buy that lipstick.

Framing consumerism as an act of rebellion or a stand for freedom is both the brilliance and the insidiousness of marketplace feminism. You’re not buying a t-shirt, you’re joining a movement. You’re not paying big bucks to attend a symposium on wine, you’re part of the “women’s revolution underway in the world of wine and spirits.” And the companies and brands that bring these products to you are, by extension, the fomenters of such revolutions.

Take Chuck McBride, chief creative officer of the branding agency responsible for the Women’s History Month ascension of the Brawny Lady, who had this to say to Adweek:

“The biggest, most courageous piece of it was, we are going to put a woman on these packages and make them available for everyone. I always think it’s fun when packaged goods clients are hip enough to change something and offer something special.”

Chuck. Really? Did the Brawny Lady also just kick a rapist in the teeth, walk a tightrope over a lake of howling Twitter trolls, or secure paid family leave for all the other female brand mascots? Because if not, I think “courageous” is probably the wrong word for the act of putting someone meant to represent 51 percent of the population on paper-towel packaging and selling them exclusively at a chain famous for being the subject of the largest class-action sex-discrimination suit in history.

It’s notable that almost none of these products actually use the word “feminist” in their marketing or advertising, and that’s indicative of a media habit that’s become more ubiquitous in recent years: the Mad Lib-ization of the word “feminist.” In trend pieces, in celebrity profiles, in marketing, “feminism” is spoken or inferred wherever “women” is the topic. Feminism, in these spheres, is power. It’s money. It’s success in a “man’s” field or a corporate shark tank. It’s friendship. It’s confidence. It’s the living, breathing version of an Onion article.

An August 2016 piece on Forbes.com typifies the often cartoonish tendency to insist that individual success, luck, and wealth are intrinsically feminist. The piece, titled “How Successful Women are Redefining Modern Feminism,” looks at a handful of women—all of whom, it must be noted, are white and young-ish—and purports to break down who the modern feminist is and what makes her run. The very first emulatable quality in this gal? “She doesn’t ask for equality.” “The modern woman,” writes author Adriana Lopez, “doesn’t need to ask for equality in a boardroom full of men, rather [sic] show that they can work conjointly.”

That’s right. You don’t even have to believe in one of the core tenets of feminism to be a modern feminist! It’s just that easy!

In the months since the 2016 election, we’ve discovered that marketplace feminism won’t protect us against the results of a very real backlash that’s been building for years in state legislatures, in courtrooms, on college campuses, and on social media. It can throw up a smokescreen—say, in the form of a President’s daughter whose website traffics in a blush-pink glow of comfortable, corporate well-being that frets gently about work-life balance and appropriate boardroom heels. It can offer up “Nasty Woman” t-shirts and “Nevertheless, She Persisted” bracelets as reminders that resistance may be found in appropriating the invective of others and embracing it as positive. We saw, with the worldwide women’s marches, that a sea of pink hats is optically striking regardless of how we might feel about their value as a symbol of unification.

But we already know that every social movement can be made into a consumable. That doesn’t transform those consumables into markers of progress; it simply highlights a conflation of identity and action that serves up “feminism” in its most palatable, agreeable form—and, in many cases, serves the market itself above all. Women’s History Month is as good a time as any to take in the full, complex scope of feminism and realize that it is a movement. But if all you’re actually moving is units of product, it’s probably not yours.

Seeing as it's National Women's History Month I thought we might be short on douchebags this week. No chance...