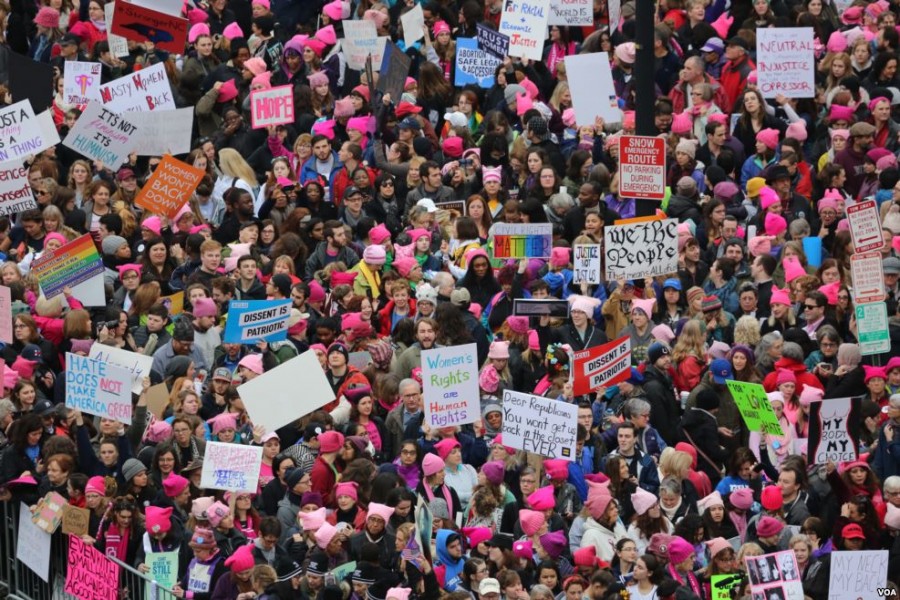 Last Saturday saw the anniversary of President Donald Trump’s inauguration and the second worldwide Women’s March. This year’s March was in many ways plagued by the same issues as the first: a difficulty with decentering whiteness and cisness, most exemplified by the now famous “pink pussy hats;” overly liberal politics that failed to significantly challenge elements of the oppressive state’s machinery presence, such as the military or the police; and a broad and incoherent platform that allowed fractious agendas to make the March unsafe through transantagonism, sex-worker exclusion, anti-Indigenous sentiment, and “pro-life feminists.”

In one year, white women have learned nothing and gotten nowhere.

Consider what the first Women’s March seemed to be. In spite of the pink hats that quickly became the symbol of the march (borne by poor taste and assault-related black humor); the infighting it took to place women of color organizers and speakers at the center of the event; and the flaws, criticisms, and very real growing pains, it seemed for a moment that we had tapped into something. Even though it took an existential threat to the rights and privileges of white women for it to happen, there was finally a groundswell of support for the grassroots initiatives and progressive causes that people of color had been fighting for for so long. In the Establishment, Ijeoma Oluo wrote about how late these white women were to the anti-racism movement—but now that they’d arrived, it was time to get up to speed because we’ve needed this support for a long time. With roughly 4.2 million attendees and parallel movements in other countries, it seemed that the battle for civil rights in the 21st century had some weighty reinforcements—until the March ended.

Harriet Tubman was a disabled black woman, an enslaved person who risked her life to free other enslaved people. Keep your cutesy symbol of cisnormative, white normative, made-a-supposedly-subversive-joke-about-sexual-assault accessories off her head.

For all the promise and bluster, it seems that the Women’s March scarcely translated into actual political will, or a significant number of white women willing to put their privilege and their bodies on the line.

The Women’s March organizers are certainly attempting to carve out a radical platform. This year’s March launched the Power to the Polls initiative that will be targeting swing states to register new voters, and last year the March presented a legislative agenda and held conferences to bolster and support that agenda. Many chapters had women of color taking the lead and events attempting to call attention to a multitude of issues; Indigenous women spoke on the importance of preserving the environment; the Mothers of the Movement spoke on police and state violence; and Janet Mock spoke on trans civil rights. Yet, this enthusiasm for a broad-based feminism was not always shared among the largely cis, white attendees.

However impressive the March may have been in supposedly tapping previously politically inactive people, it seemed largely ineffective in retaining that engagement, or channeling the politics of its attendees in a more progressive direction. The majority of white American women did not undergo any kind of political or progressive awakening or confront their own complicity in systemically supporting patriarchy and empire. Just ask the the 63 percent of white women who voted for Roy Moore in Alabama in spite of his predatory behavior. One whole year later, the problems of the March, specifically among  white women, have scarcely moved an inch. The issues persist, and the March is no more radical or cohesive than it was the first time. Why not? 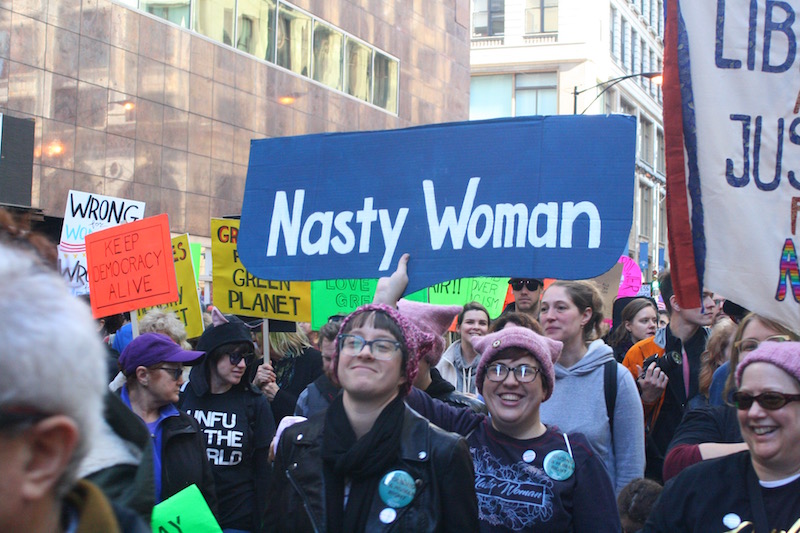 The answer lies largely in the ambition of the project—or rather, the scope of it. Sady Doyle wrote in ELLE last year that we shouldn’t call the Women’s March “messy,” rightly pointing out that women are an incredibly diverse group and to get so many on the same page is a nearly Sisyphean task. Yet it was attempting this Sisyphean task, with a particular mindset of big-tentism and all-inclusiveness, that ultimately seems to be the March’s undoing—it does a poor job of standing up for its own core tenets, and invites participation from folks who actively make the march a less safe space. It does this without the ambition to enforce a sweeping, radical, progressive  platform that seriously compels privileged attendees to examine their own role in the systemic oppression of their fellow women and people of marginalized gender, or call for significant opposition to oppressive state machinery. The Women’s March has in effect pushed out or pushed aside large swaths of people of color, disabled activists, radical abolitionists, Indigenous women and people, transfolks and queer liberation representatives in order to service the sensibilities of cis white women knitting pink hats.

Can the Women’s March be against mass incarceration and for the voting rights of felons when police are present and participating? What does it mean to boast about how non-violent the March protests have been without a critical examination of why the largely-white, largely-cis Women’s March may not invite disruption from the state? Can the Women’s March support Black Lives Matter if March attendees don’t attend BLM rallies with similar numbers and enthusiasm? Can it be against deportations without confronting the brutality and inhumanity of detention centers and the ICE task force—or acknowledging that their human rights violations and extrajudicial actions predate Trump? Can the Women’s March, in fact, see past Trump at all, or be more than a simple reaction to him?

Not calling the Women’s March messy has allowed it to stay messy. Criticism of it has been excused, brushed aside or otherwise not internalized, reducing a possible political movement with huge potential to a liberal holiday. Refusing to touch tough topics like the nation’s blanket approval of American imperialism, interventionism, and valorization of the military, or the need for reparations, the reversal of Indigenous erasure, and continuing anti-Indigenous violence won’t lead the Women’s March into the future. It can’t even put aside the accursed pink hats for the sake of trans inclusivity, for goodness sake. 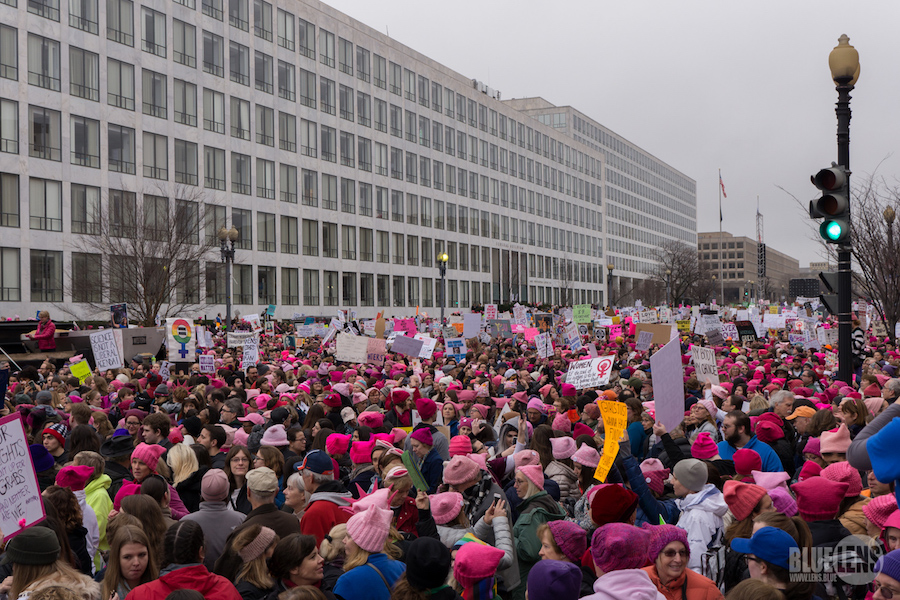 I have a lot of respect for my elders, the communist Black femmes of color to whom we owe so much scholarship and understanding of not just intersectionality, but how the oppressions of the state operate. My elders are the queerfolks and transfolks who participated in the Café Riots and threw bricks at Stonewall. My elders had their bodies criminalized by the ordinances of Andrea Dworkin and were snitched on by Gloria Steinem to the CIA. They had their labor, scholarship, and prominence appropriated by the white women you now demand we must have patience for, who owe so much to people they don’t know and will never read of or recognize.

My elders are dead. They were killed by your elders, and now their children knit pink hats, make exclusionary signs, and refuse to do anything but post about Trump on Facebook.

The Women’s March is a failure. It is a failure of intersection, of mobilization and movement politics, and of collective action. It started with Trump and went nowhere due to a hollow ideology that fails to recognize and condemn the violent history of a state founded on Black labor and Brown blood and instead chooses to condemn a single Republican administration—that is, when it can see beyond one man.

A movement that aims to be as inclusive as the Women’s March wishes to be cannot be a myopic and reactionary response to a single presidency. It must recognize the far-reaching and historical roots of state oppression, reckon with American patriarchy’s dependence on militarism and white supremacy and demand that its participants truly come to terms with their own role in this all-encompassing, diseased system. This hyper-focus on Trump allows so many people complicit in bigotry and systemic oppression to feel like agents of progressive action while holding the movement as a whole back. The March’s own goals have been stymied by the unwillingness of cis, white, abled women to reckon with their privilege and truly work with their queer, trans, disabled and non-white brethren—and they will remain so until this is rectified.

by Sarah Mirk
Donald Trump hates it when you laugh at him.