MariNaomi Looks In Between Cultures in Illustrated Memoir “Turning Japanese” 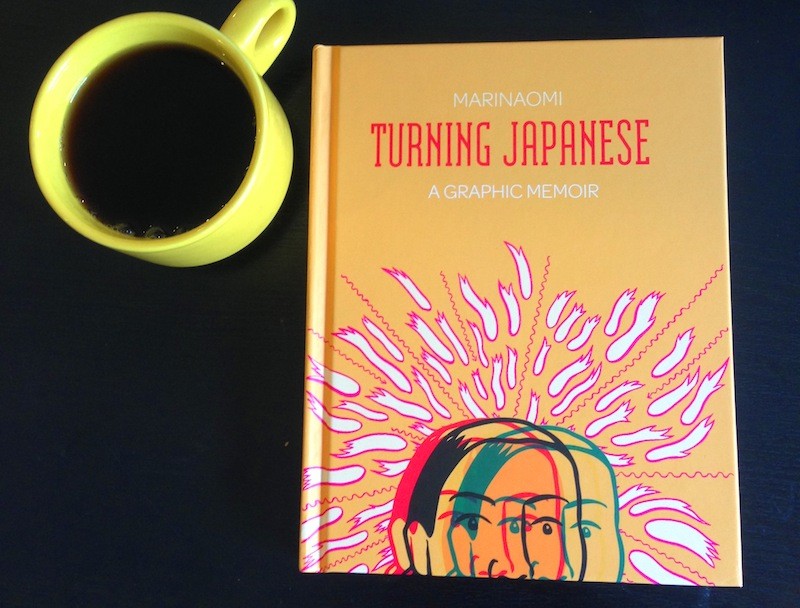 In her latest graphic memoir, Turning Japanese, MariNaomi renders the in-between spaces of culture and identity in her distinctly simple yet bold style. The award-winning artist shares a story of her younger self grappling with growing up biracial in the Bay Area, when she knew no one else who looked like her—except her own sister. To dig deeper into her own Japanese heritage, she takes a hostess job at a Japanese bar to practice the language that her own Japanese mother neglected to teach her, but as the memoir shows, she ended up learning much more about the culture and herself. I spoke with MariNaomi about grey areas, understanding cultural contexts, and how to depict a language barrier in a graphic memoir. 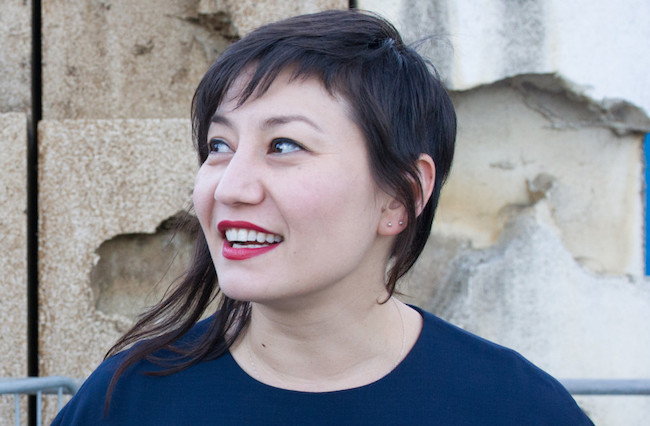 AMY LAM: The way I understood your book was that you're trying to better understand a part of yourself through learning Japanese. And in your story, you're learning Japanese by being a hostess at these Japanese hostess bars. You began first in San Jose, California, and then you do the same gig in Tokyo in order to learn the language. But then you actually end up learning so much more.

MARINAOMI: I think every young person feels like they don't quite fit in, or if they do fit in, they feel like people don't really know them. My version of not fitting in was because I was half-Japanese in a very Caucasian area. It was definitely pretty naive to think that I would find some kind of belonging in a foreign country. But when you're young, you think, “Oh, well, maybe Japanese people will get me.” [Laughs.] And that's not necessarily the case when you've grown up in America.

Yeah, and it was so funny because it got me thinking that it is such a funny young-person idea to be like, 'I'm gonna be a hostess in this Japanese bar. And that's how I'm gonna connect to my culture.” [Laughs.]

So stupid! [Laughs.] But I needed the money, and I loved the idea. I mean, I love talking to people, I love drinking, I loved smoking cigarettes, and I thought, Wow, I can do all this and get paid for it and learn Japanese and meet Japanese people! What fun this will be! And it kinda was.

What were some of the unexpected things that you ended up learning that you hadn't thought you would learn?

I thought of culture and generational things as very simplistic, when they're not; they're very complicated. I'm still learning this, but in living that, I looked into the culture and just saw this vast chasm and realized that I'll never be Japanese, for one thing, let alone understand the Japanese culture entirely. But I thought it would be so easy. I thought it was just a matter of, “Oh, once I can learn the language, then we'll be able to understand each other. Then my grandparents can see who I really am, and then we'll love each other, and everything's gonna be great.” It didn't occur to me that maybe they won't like that I'm this rebellious sexpot.

You said something really interesting: You just said that you'll never be Japanese. As a child of refugee immigrants, who was born and grew up in America, I think that straddling that line of who your parents were and who you're supposed to be under your parents' eyes, versus how you grew up—it's such a hard line to walk. When you said the phrase, “Oh, I'll never be Japanese,” you said it in a way where it's just a fact. But it was heartbreaking for me to hear you say it. So I'm just wondering, in your coming to understand that, what was that experience like?

Well, the thing is, I don't think I really understood what being Japanese was. I maybe idealized Japan a little bit before I really got into the culture. I just didn't understand things. So I don't say it regretfully. I'm pretty happy with my culture, and I'm happy being unique. It's something I've kind of had to sit with for a long time!

It's interesting too because when I wrote this book, I thought, Holy crap. No one's gonna identify with this. I grew up not knowing any hapas except for me and my sister. I thought the only people who could possibly identify with this is someone who's half-Asian like me. Luckily, there's a lot more of us now, or I've met a lot more of us. But when I was growing up, I never saw any except for Sean Lennon, really. So it was always just a curiosity, like, are other people out there? I didn't think anyone would identify, but apparently a lot of people who are Asian-American, even first-generation, feel a disconnect.

I feel like even my mother, who was born and raised in Japan, moved to America, and now lives in Japan again and has for 10 years, I feel like even she sometimes feels like an outsider. I think especially with the Japanese culture—and I don't know if this is true for a lot of Asian cultures—but I feel like the Japanese culture is not super accepting of anyone who's different. So that can be a real obstacle for the people who want to fit in but aren't from there or haven't lived there for a long time.

That's actually a really good point of your story, that you chose to be yourself rather than to try to fit into something that didn't work for you.

Yeah. But in my naiveté I thought they'd see that and say, “Oh, that's so great! You're so brave and different. What a great quality.” But—

But without a cultural understanding that maybe in their cultural context, that isn't something that's celebrated. 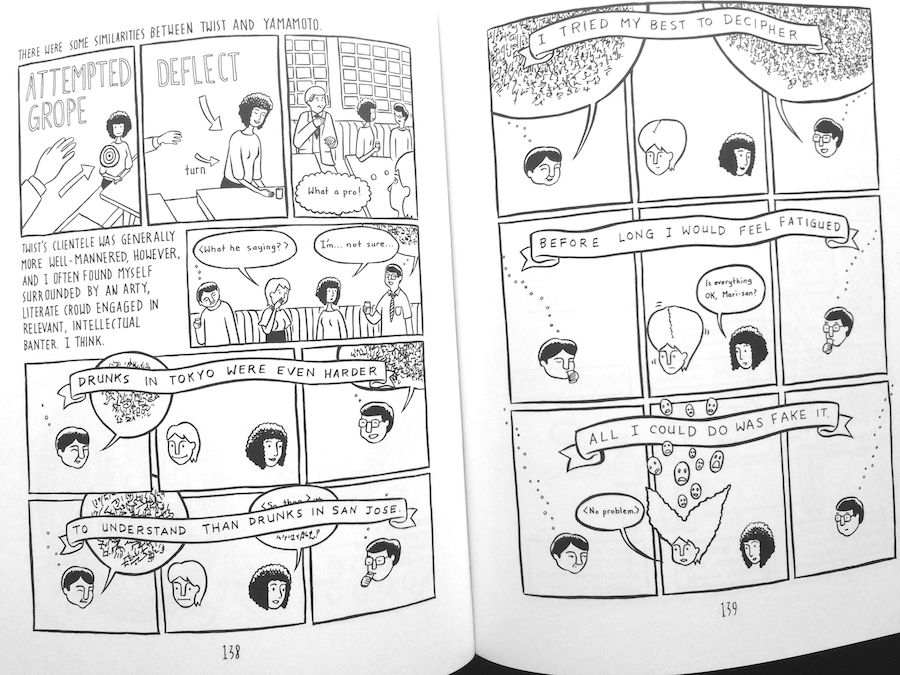 Did you ever find out why your mother never taught you Japanese?! That's the mystery in your book!

Well, it's still kind of a mystery. I think I have theories, and I have talked to her. Though, I think the last time I asked her, which was after she saw some of the book, her answer was, “I don't know.” That was probably the most honest answer that she could've given me. Not only did she not teach me Japanese, but the Japanese culture, she doesn't like talking about Japan very much. And she didn't like living in Japan very much. So I feel like she just wanted to distance herself from it. But that's just a theory. Because Japan's not so great, or it wasn't—especially back then—such a great place to be a woman for lots of reasons. This is just a theory.

Oftentimes how we speak a language can really inform us about what the culture is like. So it kind of made sense, then, if you feel like your mom doesn't fit into that culture, then she doesn't want to expose that or share that part with you. Because maybe she didn't want you to have to deal with that culture as well.

That's really generous. That's a nice way to think of it. It might actually be true. I do think that she was protecting her parents from knowing me and that I'm kind of rough around the edges. But I’m not sure if whether she was protecting them or protecting me.

Another thing that I really thought was interesting in your book is the written dialogue when people are speaking Japanese. I was looking at the characters [and] felt 99% sure that isn't Japanese! [Laughs.] And then I had to ask my Japanese friends: “What's going on here? What is MariNaomi doing?” So I wanted to clarify with you. They’re not Japanese characters, right?

I thought that was a really interesting use, to show your non-understanding of the language.

Well, I wanted to make sure that someone who does know kanji will understand the feel of the book. Because if you could just read the dialogue, and you understand what it says, you're not understanding the outsider's perspective. You're just reading what they're saying.

But that was a really smart choice because often, for writers and especially writers who are using their native language or other languages, they have to balance whether or not they want to translate it. It depends on who they're serving and whose story they're telling. I think that this really served the story that you're telling because it's about you not understanding it. It was kind of fascinating to go through the book. I really laser-focused in on these characters!

It took me a long time to figure out how I was gonna basically translate those feelings. That's probably the one technique that I spent the longest just figuring out for the book. I'm pretty happy with how that turned out. I love that you thought they were real Japanese kanji though. [Laughs].

How did you come about choosing the title of your book?

Read This Next: With Temporary Tattoos, Artists Make Their Invisible Disabilities Easy to See
Read This Next: Nonmonogamy and Sexual Fluidity on House of Cards