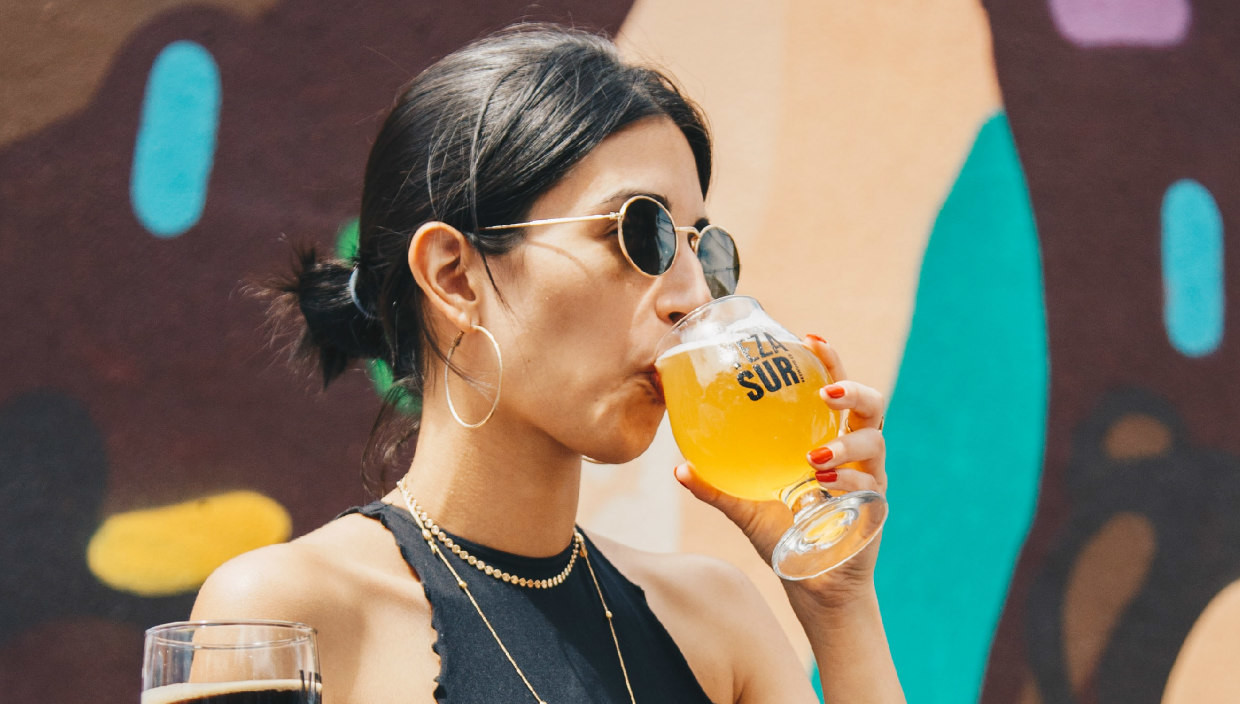 This article was published in Underground Issue #53 | Winter 2011 Subscribe »

Contrary to pop-culture belief, beer wasn’t created solely for men’s palates as an accompaniment to their tailgating, wolf-whistling, burger-grilling lifestyles. In fact, history tells us, it’s the opposite. In The Naked Pint, beer sommeliers Christina Perozzi and Halle Beaune set the record straight: Women have been beer brewers since Babylonian times, enjoying the status of high priestesses. Welsh folklore recounts the story of the goddess Ceridwen, who brewed a potion meant to transform her son, Morfran, from hideous to godlike. A legend passed down in many indigenous South American tribes tells of Nungui, the spirit of Mother Earth, who imparts both her abundance and her brewing skills to a hungry woman named Ungucha.

The late cultural anthropologist Alan D. Eames, who authored 1995’s The Secret Life of Beer and who was known as “the Indiana Jones of beer” for his intrepid pursuit of brew history, might have put it best. Quoted in a 2004 piece in Canada’s Macleans magazine, Eames said: “From its very inception some 8,000 years ago, every ancient society’s beer-creation myth tells the same story: The drink was a gift from a female deity to the women of that community.” Not that we’ve ever seen a respectful commercial portraying the female brewer or goddess bestowing beer on the masses. Instead, we’re subjected to ads like the 2007 Heineken DraughtKeg campaign, in which a female cyborg in a tight dress gyrates for a few moments until her stomach (or uterus) pops open to reveal a Heineken DraughtKeg, which she enticingly pours as she replicates into two other prancing clones. It’s doubtful that Heineken was honoring the long history of female brewers, but rather engineering their idea of the perfect woman—as a silent, sexualized, neverending beer tap.

But marketing aside, why has a libation with such a female-centric origin story become coded, over time, as the near-exclusive reserve of men? Perozzi and Beaune believe that this transition can be traced back to the 1300s, when the official Brewers Guild limited the number of women allowed to become certified brewers. And according to Eames, the Industrial Revolution had a lot to do with the changeover. The mechanization of beer production forced brewing out of the home and, by extension, away from female brewers; beer drinking became popularized in urban taverns that catered to men—and which, thanks to fears about prostitution, also barred women. But after centuries of identification as a men’s beverage, beer seems, at least in many corners, to be returning to the welcoming hands of women.

Gallup polls consistently show women accounting for a quarter of all beer consumers. And the predictability of beer marketing is now a marketing tool in itself, aimed squarely at female audiences. Take the Miller Lite commercial that aired during the 2009 Super Bowl, which chose to poke fun at how beer advertising openly degrades women. In it, two attractive women disagree about why they drink Miller Lite. One screams, “Great taste!” while the other belts out, “Less filling!” They then start a physical fight that includes them tearing each others’ clothes off in a fountain, and eventually leads to a wet-concrete wrestling match. The commercial—which references an actual commercial for the beer that aired in 2003—then cuts to two beer-drinking men fantasizing about what a great commercial that would make. One of them says, “Who wouldn’t want to watch that?” The camera cuts to their two female beer-drinking companions, both wearing incredulous expressions.

And an industry niche that might be called female beer advocacy is growing. Teri Fahrendorf, who brewed for a number of craft-beer companies and was one of the first female brewmasters in the United States, believes one way to combat this gender imbalance is to recruit and unify women working in the industry. In 2007, when Fahrendorf left her post at California’s Steelhead Brewing Co. and set off to tour America’s craft breweries, she realized that there were a growing number of female brewers out there: Megan Parisi of Cambridge Brewing Company in Massachusetts, Laura Ulrich of San Diego’s Stone Brewing, Whitney Thompson of Pennsylvania’s Victory Brewing, and Veronica Vega of Oregon’s Deschutes Brewery.

The problem was that many of them had been unaware of their female counterparts working in the industry. Fahrendorf began collecting names for a list that eventually became the Pink Boots Society, an organization whose mission is to educate women about beer and to encourage them to enter all aspects of the industry. The membership base is now close to 600, with chapters in New Zealand, Australia, and the United Kingdom. The consumer leg of the Pink Boots Society, Barley’s Angels, focuses on promoting beer education and, according to its website, “creating environments where women can learn more about beer in a friendly, educational, and supportive atmosphere.”

Another group, Women Enjoying Beer, works with different partners—retailers, breweries, distributors, and bars—to help market beer toward female consumers. And beer-based social groups with names like In Pursuit of Ale, Girls’ Pint Out, and Left Hand Brewing Company’s Ales 4 FemAles are growing in popularity by hosting tastings, dinners, and nights out. Of course, any time a masculine-identified industry plays at endearing itself to the ladies, there are going to be a few pronounced missteps. Take the recently launched American microbrew known as Chick Beer, which touts itself as engineered “just for women.” With a pink label that mimics a curvy female body and a purselike six-pack carrier, the beer’s branding fairly knocks you over the head with its concept of “femininity.”

The components that make the brew itself perfect for women, according to the Chick Beer website, include a “soft and smooth” flavor profile that’s “lightly carbonated, for less of that bloaty feeling,” and, of course, that it contains “97 calories and 3.5 carbs per bottle.” And the label deliberately doesn’t focus on exactly what style Chick Beer is—lager? ale?—reinforcing the presumption that women aren’t interested in the complex varieties of beer, only that whatever they’re drinking won’t make them fat. Another swing and miss was Carlsberg’s attempt at a “gender-neutral” beer, Copenhagen, which hit shelves in Europe earlier this year. Touting the brew’s “natural ingredients” and emphasizing the clean design of its bottle and label, Carlsberg’s director of international innovation wrote in the Copenhagen press release that, “There may be situations where [women] are standing in a bar and want their drinks to match their style. In this case, they may well reject a beer if the design does not appeal to them.”

Craft beers that brand their products based on their qualities and on the personalities of breweries themselves would seem to stand the best chance of reaching women who want to be treated as beer drinkers first and women second. Full Sail Brewing, which is run by Irene Firmat, one of the few female CEOs in the business, takes an approach that, unlike Copenhagen, actually is gender-neutral, with bottle labels that reflect the brewery’s outdoorsy, colorful Oregon location. The label also proudly displays Full Sail’s independent, employee-owned company status, with the style of the beer prominently displayed below that. The message of the marketing is clear: This is a craft brewery that’s proud of what it creates and wants its product to speak for itself.

As women return to the helm of a beverage they helped create, perhaps there will finally be that respectful commercial we’ve all been waiting to see—a female brew goddess bestowing her beer on the masses.

Blue Moon Brewing Company has so far been the most successful at reaching female consumers. Its witbier, the fastest-growing beer in the craft and specialty category, has, since its 1995 launch, won multiple honors in the World Beer Championships. Beer writer and college professor Jason Wilson reported in an August 2011 San Francisco Chronicle piece that, “Among my female students, 100 percent say Blue Moon is their favorite beer.” While Blue Moon quietly appeals to the stereotypical female craving for a “light, refreshing” beer, it doesn’t offer a condescending message in either marketing or label. But it’s also not really a craft beer. Blue Moon is manufactured by Coors Brewing Company, one of the largest commercial brewers in the United States. It’s hard to unequivocally applaud a mass-market company in craft-beer clothing, even when it’s been successful at respectfully reaching female consumers. After all, as an official sponsor of the NFL and NASCAR, Coors is the standard-bearer of macho beer culture.

For Ginger Johnson of Women Enjoying Beer, however, what matters more than the label, the marketing, or the parent company is simply what’s inside the bottle. She believes that the most effective way to reach women is to “start by asking them what flavor they like, match what beers are available, then talk to them about why they drink beer and why they don’t drink beer.” The same is true for sommeliers Perozzi and Beaune, who believe that beer-pairing dinners are a great way to reach the female consumer. “You really see beer in such a different way,” says Perozzi.

Coupled with this new marketing outreach toward potential female drinkers should be the reminder and reinforcement of the long heritage women have as brewers. For many years, women have been relegated to the background of the industry both as targeted consumers and in terms of their place in beer history. Mainstream media in general has never truly reflected this history because, mostly, it’s a forgotten one. However, with the recent resurgence of female consumers and brewers, Perozzi and Beaune wrote in The Naked Pint, “Women are reclaiming their history as brewsters and beer lovers.” The increased female presence can hopefully shift the overall patriarchal mindset of the industry and evolve beer’s marketing and advertising paradigm into one that respectfully represents the female consumer. As women return to the helm of a beverage they helped create, perhaps there will finally be that respectful commercial we’ve all been waiting to see—a female brew goddess bestowing her beer on the masses.

Read this Next: Douchebag Decree: Chick Beer, the "Beer for Women"

by Kelsey Wallace
Are you a woman who secretly enjoys beer yet can’t find one girly enough to suit your needs? Would you enjoy beer more if...
by Celena Cipriaso
View profile »