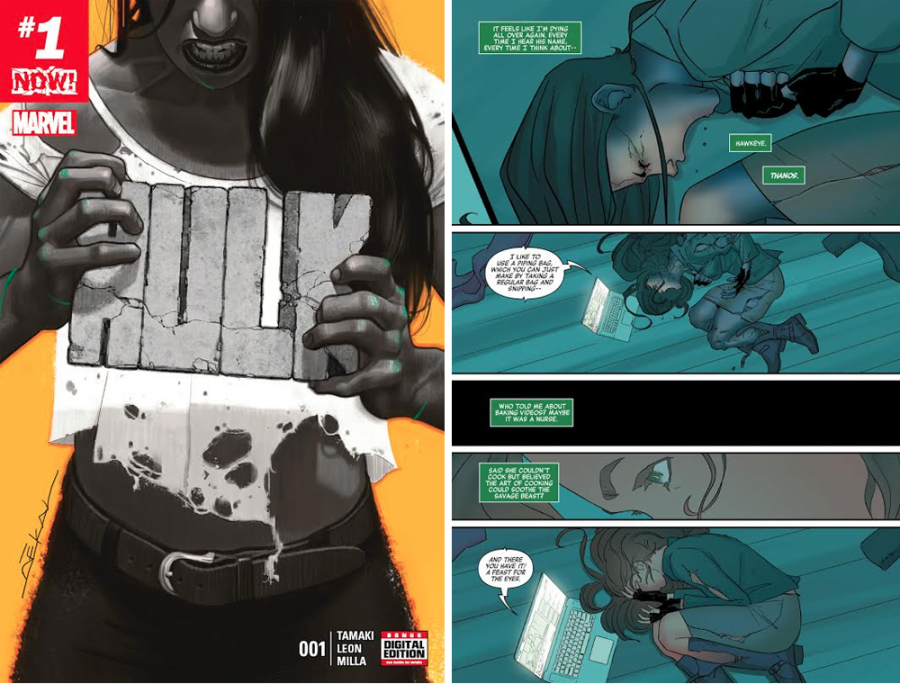 When Marvel Comics first announced that She-Hulk—a.k.a. Jennifer Walters—was taking over from Bruce Banner as The Hulk, the internet could barely contain itself. “Show me that lady muscle!” one fan tweeted. “#ImWithHer” hashtagged another. If the first issue of the new Walters-centered series released in December 2016 is anything to go by, fans and critics have good reason to feel excited. Marvel’s choice to drop the “She” in She-Hulk and center Walters as the protagonist in the Hulk comics represents a seismic shift. Not only is a woman now taking center stage as Hulk, stepping into a role that has always been a symbol of superheroic masculinity, her trauma and internalized anger is at the heart of the story—and the comic raises interesting questions both on and off the page.

Marvel’s new Hulk series begins after the traumatic events of the franchise comic’s 2016 crossover storyline Civil War II, a series where Marvel superheroes are pitted against each other. Last year’s third installment ended with Jennifer Walters suffering near-fatal injuries and the sudden death of her cousin Bruce “The Hulk” Banner. What happens next marks a new chapter, not only in terms of Hulk’s ever-evolving narrative, but in Marvel’s continuing quest to embrace inclusivity, too.

Keen to find out more, I caught up with Marvel’s new Hulk writer Mariko Tamaki over the phone as she worked from her home in California. She told me the new Hulk is essentially a story about one woman’s struggle with grief and post-traumatic stress. “The transformation that used to make her [Jennifer Walters] feel so strong is now connected to fear and pain,” Tamaki said. “The point that I’m trying to get at is that all those things that you think make you weak are things that make you strong. You can’t run away from feeling sad or angry. A woman’s pain is something that makes her strong, and so [the comic is] ultimately about trying to get back to that.”

Tamaki is well known for her graphic novels Skim and This One Summer, and her writing is rooted in the unpredictable emotionality of the human condition. In 2000, she made her fiction debut with Cover Me, a darkly humorous novel that deals with adolescent depression and self-harm. With Tamaki on board, Hulk now has an authentic female voice with which to explore the day-to-day experience of psychological trauma. For now, at least, Jennifer Walters is facing a world where she is the only Hulk. This is a sizeable plot development, as Tamaki was quick to underline. “You can have a whole Hulk book that is about a female character,” she said. What’s more, that character can be just as complex and conflicted as her cousin, Bruce, who she succeeds. 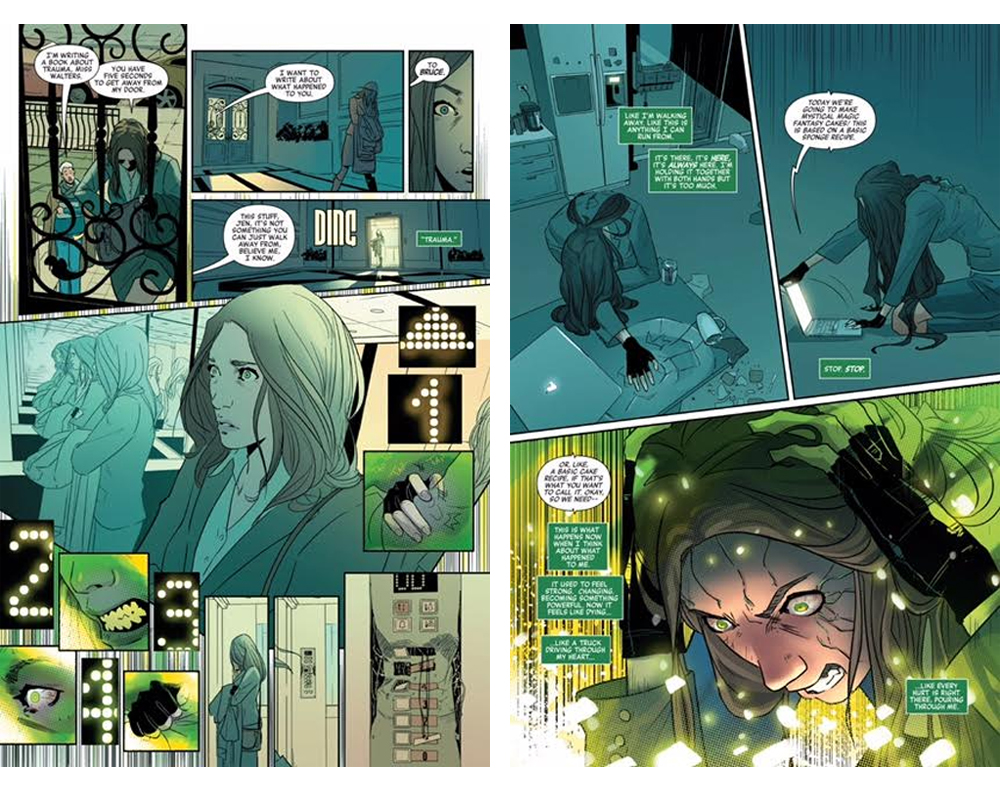 Marvel is decidedly challenging the character of Jennifer Walters in order to finally get under her skin. Originally created by comic-book writer Stan Lee and artist John Buscema, She-Hulk first appeared in Savage She-Hulk #1 in 1980. Just as 1977’s Ms. Marvel was originally conceived as a female counterpart to an already existing male superhero, Captain Marvel, She-Hulk’s creation was similarly indebted to the runaway success of The Incredible Hulk. It is significant that Jennifer Walters (a.k.a. the “Savage She-Hulk”) develops her milder Hulk condition because of a blood transfusion from her cousin Bruce Banner. It creates a key distinction between the two: Walters, unlike Banner, still maintains her emotional control.

Wanting to find out more about She-Hulk and her origins, I contacted Annie Bullock,co-owner of 8th Dimension Comics & Games in Houston, Texas, and co-administrator of the Valkyries, an organization for women working in comic book retail. She told me that since the character’s inception in 1980, the “She” in “She-Hulk” was always fairly prominent in her portrayal. “She was written and drawn by men for a mostly male audience,” Bullock said. “That’s not to say no women were reading comics, but they weren’t viewed as a primary audience at that time.” As a result, the character of Walters was depicted with the male gaze in mind. Bullock said when Walters would “Hulk out,” her clothes would strategically, and somewhat sexily, tear as she grew. “I learned the hard way that it’s best to leave safe search on when you do a Google image search for She-Hulk,” she said.

For both Tamaki and the series’s artist Nico Leon, Walters’s new look was crucial to the character’s change of direction. There are no revealing leotards or cleavages on display here. “We talked a lot about the physicality of this character,” Tamaki said. “And one of the things that we said is, when you’re feeling traumatized, you’re not a skimpy-outfit person. When she transforms, she’s not feeling super sexy! She’s feeling out of control and petrified, and that’s the way we’ve depicted the transformation as well.”

When exploring the devastating impact of post-traumatic stress disorder (PTSD), Tamaki also wanted to avoid the stereotypical “crying, female character” as much as possible. “Not that there’s anything wrong with crying, but I was aware of that,” she said. Last year, I spoke with  director Sana Amanat, who works with Marvel, and she also touched upon this crying stereotype in reference to Ms. Marvel. “The problem was, sometimes the stories about her either victimised her, or she’d be sitting on her couch and crying, complaining about a guy, and eating ice cream.” When it comes to female characterization, it would seem that Amanat and Tamaki are on the same page. “I really wanted to get into the complexity of trauma, of what it means to get through it,” Tamaki said. “I think any kind of mental state is a world in itself, right? When you’re depressed, you’re living in the world of depression, and I really wanted to get into that.”

Plumbing the depths of Walters’s pain, grief, and anger is a marked departure for Marvel. The new Hulk steers away from the surface-level celebration of a woman who was always defined as fun-loving and light-hearted in the past. The gamma-irradiated lawyer provided light relief, in contrast to the darker inner torment of her male cousin. Bullock said this was especially the case during She-Hulk’s longest-running series in the ‘90s. “The tone was light-hearted and comedic, as it was intended as a satire of comic books,” Bullock explained. “She’s a lawyer and sometimes was simultaneously a fashion model, so she was generally portrayed as confident and powerful thanks to her Hulk powers.”

It’s almost impossible to read Tamaki’s new Hulk without exploring the theme of female anger—especially in light of Walters’s previous She-Hulk incarnation. In the past, the character was always in control of her anger. “She’s extremely strong, but she doesn’t tend to kill people either intentionally or via collateral damage like Banner sometimes would during a Hulk rampage,” Bullock said. Mark Paniccia, a senior editor at Marvel,  concurs. “Traditionally, Jennifer Walters has been very comfortable with her transformation into She-Hulk. This is a step towards a more classic Hulk story.” In other words, it’s a classic male story.

Which brings me to why I think many fans feel hopeful about this latest Hulk: Walters is not okay. It’s a small detail, but a pivotal one in a world where many women still feel unable to express their anger, trauma, or grief without fearing judgement. “Who gets to be angry?,” Roxane Gay asked in a New York Times essay last year. She posed the question because the history of angry women—especially angry Black women—is a complicated one. A woman’s rage has traditionally been met with avoidance, embarrassment, and disregard over the centuries. Even a cursory flick through the pages of history gives us a taste of this patriarchal unease: The ancient philosophers barely acknowledged female anger in their academic explorations, and as for the Old Testament? “It is better to dwell in the wilderness, than with a contentious and an angry woman,” the book of Proverbs advises.

On the rare occasions when we do get to be angry, judgements still abound, even today. We only need to recall Donald Trump’s “nasty woman” jibe during last year’s final presidential debate to remind ourselves that the labels and stereotypes are always there. “When women are angry, we are wanting too much or complaining or wasting time or focusing on the wrong things,” Gay writes. “…Or we are petty or shrill or strident or unbalanced or crazy or overly emotional.”

As for grief and trauma? We still wrestle with women’s experiences there, too. Who could forget Lady Gaga’s recent run-in with celebrity troller Piers Morgan? In December 2016, Morgan took to Twitter to dismiss the singer’s claim that she suffers from PTSD due to being raped at the age of 19, calling it “vainglorious nonsense” and asserting than only soldiers at war experience PTSD. His crass labeling only goes to show to what degree post-traumatic stress is still misunderstood and disregarded, especially if you’re a woman experiencing it 6,000 miles away from a battlefield in Mosul.

“I don’t think you have to have been to war to know trauma,” Tamaki said. “I tried to put myself in that character’s shoes—not necessarily specifically as a female character—but there are specific parts of a woman’s life that I wanted to have in the story. For example, the desire to appear strong and appear like you’re able to handle things and not like a stereotype of someone who has fallen apart.”

This is why Walters’s new plot development feels so promising: The new Hulk is entirely centered in the post-traumatic ripples of a woman’s pain. There are no neat edges on display here. Walters’s emotions are jagged, confused, and raw. “I think ‘it’s fine’ and ‘it’s okay’ are the two least accurate phrases in the world,” Tamaki said. “It’s nice to see somebody who’s not okay, and it’s not the worst thing in the world. It’s perfectly acceptable.”

When I suggested to Tamaki that the undercurrents of denial and repression are something that a lot of women will identify with, she told me that when she started writing the character of Walters, she thought a lot about the strong women she knows.

“One of the things that women are so trapped by is that in order to appear strong, you have to appear unemotional, right?” she said. “It’s like when women really let loose, there’s something that’s supposed to be kind of weak about that, and that’s a portrait that we should be pushing against. You can absolutely be a strong, powerful woman who gets angry or expresses the emotional impact of something in their life.”

The new Hulk isn’t a rejection of strength—far from it. By embracing her vulnerability, Tamaki is sending out a bold message to every woman who’s ever sat on her insecurities in order to conceal them completely. The message is clear: There is no shame in female instability. “I think there is a time in anybody’s life where you realise you have to embrace your vulnerabilities,” Tamaki said. “But that doesn’t mean you’re not strong. It just means you’re a person who has sadness in your life. And those things can make you a better warrior.”

Kat Lister is a freelance journalist and writer living in London. She writes about entertainment, culture and women’s issues.

Relevant: It’s All In Your Head: The Dangers of Disbelieving Female Pain

by Caroline Reilly
Female pain exists in a crossroad of stigma, disbelief, and misogyny.