Work In Progress: Silva Urbano displays an arpillera from Colectivo Memorarte along with a tote bag embroidered by a student she taught in the local jail

Sorting through scraps of fabric, bits of torn jeans, and leftover squares of quilts, a collective of Chilean embroiderers in the Pedro Aguirre Cerda neighborhood of Santiago marvel at invisible possibilities.

From a piece of a baby’s onesie, one woman imagines a banner. From the ragged scrap of a dress, another imagines a downtown protest. Using bits and pieces of fabric, these embroiderers construct elaborate scenes from their everyday lives and their country’s history. This is Colectivo Memorarte, a group of Chilean embroiderers dedicated to recording memory through art. Erika Silva Urbano, the group’s director, believes that women can tell their versions of history in fabric and “transform themselves through art.”

I grew up in a family of quilters, so I always knew that fabric and crafting had a kind of transformative power: an ability to unite women. But I only recently realized that fiber arts have a power that can spread beyond the walls of a household. For women crafters across the world, fabric has often been a means of political resistance. No example better demonstrates the political power of needle and thread than perhaps the political embroiderers, or arpilleristas, of Chile. With vibrant energy and thoughtful community building, Chilean embroidery groups are providing social spaces for women to come together. Fabric, thread, and community are empowering women and giving them voices in the stitches of memory.

Women crafters made the first arpilleras, embroidered designs appliquéd on burlap sacks, in the 1970s after dictator Augusto Pinochet took control of Chile. During his 17 years in power, political and artistic speech was censored and those who spoke against the regime were killed or detained in torture centers. As Chilean women watched their loved ones disappear into death, detainment, or the unknown, they began to meet in secret to embroider their stories onto burlap sacks. With these sacks, and with scraps of fabric taken from clothing that belonged to their disappeared family members, Chilean women came together and formed a community committed to preserving their memories—and eventually advocating for political change.

Though the Pinochet dictatorship ended 30 years ago, the memory of that time lives on in the hope that Chileans will never live through another period of such dramatic human rights abuses. At the Museum of Memory and Human Rights in central Santiago, alongside newspapers from the military coup, video testimonies from torture victims, and banned books, the museum also showcases arpilleras. From a single visit, most people might not know that the museum actually owns hundreds of arpilleras held either in their collection or in exhibits that travel outside the Chilean capital.

Museum conservator and restorer Verónica Sánchez Ulloa works closely with these preserved arpilleras and many of the women who made them. Recounting the history of the arpilleras, Sánchez Ulloa explains that they gained popularity among female crafters partially because sewing was a skill passed down between women, but also because arpilleras were inconspicuous. “Arpilleras were easy to carry in a purse,” Sánchez Ulloa says. “They were made out of materials that were easy to carry, to transport, and to work with.” Since a woman could bundle up her fabric and hide it in her purse, she didn’t have to worry about being caught with politically subversive art.

The same characteristic that made arpilleras safe to work with also made them accessible: Women could work with any kind of fabric, including the recycled clothing of their disappeared relatives or cheap scraps of material. As the arpilleras gained traction, some women began to wonder if there might be a way to make a living off their art while also making their political statements. The Roman Catholic Church, which escaped much of the censorship of the dictatorship, hosted arpillera workshops and eventually began selling arpilleras abroad, transforming arpilleras into an economic movement. “The idea of selling these arpilleras emerged as a means for women to sustain themselves,” says Sánchez Ulloa, even while they dealt with difficult themes. “What could they depict? They couldn’t show happy things; there was too much pain.” Just as the arpilleras became an economic strategy for supporting single women, they also became a political movement to critique the dictatorship.

Silva Urbano fell in love with arpilleras at the museum and founded the memory-creating group Colectivo Memorarte. Their name is, quite literally, a combination of the Spanish words for “memory” and “art.” Drawing on the dictatorship-era tradition of political embroidery, Colectivo Memorarte is a modern group of arpilleristas who embroider wall-hangings and banners in response to contemporary social issues. Each week, anywhere from three to twelve women show up for the group’s meeting and work on stitching new arpilleras.

In the same spirit as their mothers and grandmothers, the women at Colectivo Memorarte embroider for social change. “We are going to sew things that have social themes or have to do with human rights,” Silva Urbano said. Colectivo Memorarte’s aim is to act as a space for women to learn embroidery and also discuss difficult social issues. “What matters to me is not who sews the most or who sews the best,” Silva Urbano says. “We can all sew.” What matters to her instead is that people are learning from and challenging themselves in their embroidery.

The women of Colectivo Memorarte represent the immense power of embroidery not only as a way of uniting women and sparking political dialogue, but also as a means of personal transformation and remembering. Before founding Colectivo Memorarte, Silva Urbano taught her very first embroidery class to a group of abused women and families of desaparecidos—Chileans who “disappeared” to torture centers or were killed during the dictatorship. For her, art is as much about making something as it is about changing the self. She carries with her a tote bag embroidered by a student who she taught in the local jail. She worked with the prisoners to sell their tote bags, and one of them gifted their bag to Silva Urbano instead, saying, “Not everything in life is for sale.”

While arpilleras such as Silva Urbano are helping others, they’re also recording their own memories and experiences. “Embroidering about the past has value, but who embroiders about today? Who embroiders so that one day this moment will be remembered?” Silva Urbano says. “It’s memory, but it’s also memory because what we make will be a register of memory for the future. The arpilleristas of the dictatorship didn’t embroider about the past, they embroidered about the present.”

One of Colectivo Memorarte’s most recent projects demonstrates this dedication to memory. In July, the group embroidered a series of palomas huecas, or “hollow doves.” These doves are meant to represent the missing people of the dictatorship, their absences, and the absence of peace. Silva Urbano says Colectivo Memorarte hopes to “make many doves that represent people who disappeared or died during the dictatorship—the metaphor being that they are not here, but connect all of the doves to form a larger dove. In this way, their absences form a presence.” 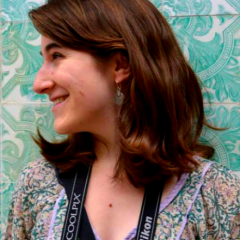 Cecilia Nowell is a freelance journalist who writes about political art, feminism, and anything else that strikes her fancy.  Her writing has appeared in The Establishment, The Tempest, Bustle, and Ms. Magazine’s blog. In her free time, she runs a cat blog, drinks too much tea, and enjoys hiking. Her writing can be found at cecilianowell.wordpress.com.