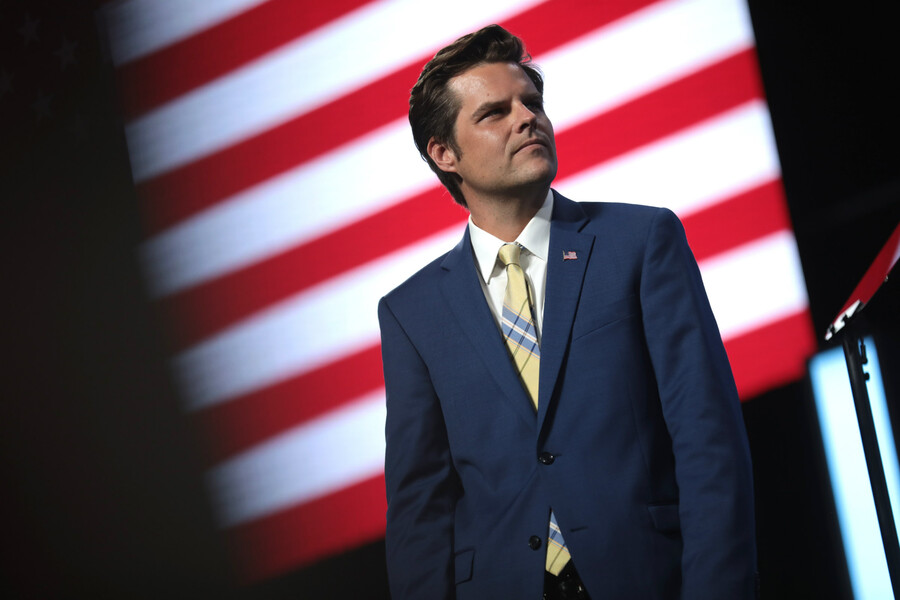 The Department of Justice (DOJ) is currently investigating Florida Congressman Matt Gaetz for allegedly traveling across state lines with one or more women he paid for sex who may have been under 18 at the time. The DOJ has said these crimes may constitute sex trafficking, and that Gaetz, an outspoken evangelical Christian with theocratic leanings, might be facing charges that carry stiff prison penalties. “I was saved in a Baptist church during my teenage years,” Gaetz once said while running for office. “I am a member of First Baptist Church in Fort Walton Beach. The Bible, the Gospel—these are our instructions from God. We are to follow faithfully.” On sexual matters particularly, Gaetz’s views align with an evangelical purity culture that deems any sex act (or thought) outside of a lifelong, heterosexual, monogamous marriage irredeemably immoral. It’s somewhat ironic to see Gaetz caught up in his own culture’s favorite moral panic. Then again, it’s perhaps unsurprising, as many aspects of purity culture help enable sex abuse, exemplifying how evangelicals’ sex-trafficking hysteria distracts attention from far more common kinds of sexual abuse.

While Gaetz may be among the latest high-profile evangelicals to be credibly accused of sexual impropriety, he’s hardly alone. The U.S. evangelical movement is currently reckoning with an onslaught of allegations. The Southern Baptist Church is dealing with a sex abuse scandal. A joint investigation by the Houston Chronicle and San Antonio Express-News in 2019 found a systemic pattern of documented abuse in Southern Baptist churches that spanned two decades and included at least 700 victims. Parents have also accused one of America’s largest Christian camps of employing a prominent spokesman who raped multiple children. Bill Gothard, head of the Institute in Basic Life Principles, is accused of sexually assaulting dozens of children. Multiple women have accused Ravi Zacharias, head of Ravi Zacharias International Ministries, of rape. Multiple women have also claimed Illinois megachurch pastor Bill Hybels sexually assaulted and harassed them.

Though evangelicals tend to oppose any sexual norm they believe might threaten the stability and fecundity of the Christian nuclear family—including premarital sex, interracial dating, gay marriage, trans rights, immigration, and abortion—the purity culture Gaetz and other evangelicals promote may actually exacerbate sexual abuse. A recent report from the Missouri Coalition Against Domestic and Sexual Violence found that certain norms embedded in religious teachings, in particular, are associated with high levels of sexual abuse; these include gender essentialism, limited autonomy for women, limited gender egalitarianism, a view of masculinity as dominant and aggressive, and male sexual entitlement. So while it might seem counterintuitive that sexual abuse allegations proliferate in a movement that emphasizes sexual restraint and propriety, evangelical purity culture shares troubling overlaps with other cultures in which sexual abuse is common. For example, evangelical purity culture stresses gender essentialism—patriarchal power structures in which women serve and obey men—and rigidly enforced gender roles. This reinforces a hierarchy in which men control women’s behavior, especially sexual behavior, while being absolved of responsibility for their own. At “purity balls,” prepubescent girls sign pledges to their fathers promising to abstain from sex until marriage;  former child celebrities including Miley Cyrus, Selena Gomez, Demi Lovato, and the Jonas Brothers once inspired their young followers to wear  “purity rings” to symbolize this form of commitment.

Purity culture also teaches young people to feel ashamed of normal, healthy sexual impulses; and employs ritual demonstrations meant to warn young people away from sin by emphasizing the dangers of premarital sexual activity. Sex before marriage meant that “You would walk down the aisle fundamentally tarnished, having lost something you could never get back,” as conservative writer David French notes in a piece for The French Press. “In one particularly pernicious ritual, youth pastors would show Christian teenagers two pennies, one brand new and others that had been in circulation. The brand new penny was ‘pure.’ The dirty pennies were ‘handled,’ and the more they were ‘handled,’ the dirtier they became.” Other churches demonstrate the danger by way of roses without petals or chewed gum; the leaders at my own youth-group abstinence camp used a piece of tape, teaching us that, like tape that loses its stickiness from use, sex before marriage weakens the eventual bond with our spouses. Purity culture and high-abuse cultures teach that men are constantly horny and can’t be trusted to control their sexual thoughts or actions, so young girls and women must protect men from lustful thoughts and temptation through saying no and hewing to ever-changing, inherently subjective, “modesty” requirements. After marriage, purity culture and high-abuse cultures both teach men to feel entitled to sex and teach women to feel responsible for satisfying their husband’s sexual desires.

Since the beginning of the 21st century, a renewed right-wing evangelical movement  has worked to whip up a moral panic around sex trafficking in the United States and abroad. Like most moral panics, this one has been spurred by fear, with the truth always coming out later. There’s no epidemic of sex trafficking that requires the federal government to censor online pornography or arrest, deport, or incarcerate Americans for buying or selling sex. Nevertheless, evangelicals have forged a vast network of organizations meant to “raise awareness” and lobby the U.S. government to use state violence to enforce sexual purity standards. Sold No More, for example, is the brainchild of evangelical activist Jerry Peyton, who previously supported crisis pregnancy centers and fought for abstinence-only sex education. Operation Underground Railroad receives support from the Mormon church. Shared Hope International, founded by former lawmakers with explicit religion-fueled right-wing agendas, helps write anti-trafficking policy.

Yet most of these groups downplay their religious connections. The evangelical-founded National Center on Sexual Exploitation (NCOSE), for instance, was known as Morality in Media before rebranding in 2015; Exodus Cry is an offshoot of an anti-gay group known as the International House of Prayer. To further obfuscate their origins, NCOSE and Exodus Cry created a new org, TraffickingHub. These groups share one explicitly stated goal: to further criminalize and stigmatize pornography and sex work to make them more punitive. The Coalition Against Trafficking in Women (CATW), NCOSE, and Shared Hope International lobby governments to use anti-trafficking laws to punish men who patronize adult, consensual sex workers. Alaska’s HB 359 recategorizes sex work and “promoting prostitution” as sex trafficking regardless of whether the accused engaged in force, fraud, or activity involving minors. But nearly every statistic they use in the service of “raising awareness” is misleading or inaccurate: They count every call to their tip hotline as a separate instance of actual sex trafficking even though one instance may result in multiple calls—and, more important, that many calls are unsubstantiated. These groups also count every instance of consensual adult sex work as sex trafficking because they deny that there’s a distinction.

The most cursory analysis reveals that nearly every case of “sex trafficking” turns out to be one of two things: It’s either actually adult, consensual sex work or it’s an instance of intimate-partner violence.The high-profile Asian massage parlor sting that netted billionaire Robert Kraft is a particularly egregious example: Despite media reports that called it a “sex trafficking” raid, police made no arrests for sex trafficking in that case; prosecutors, did charge four Asian women with prostitution and levied $30,000 in fines against them. The real sexual abuse epidemic is sex workers being raped by clients and then being raped by police when we try to report it. It’s boyfriends telling their girlfriends to have sex for money or they’ll break up with them. It’s congressional representatives like Gaetz showing nude photos of women without their consent to his colleagues on the House floor. Polaris, Exodus Cry, TraffickingHub, NCOSE, etc. have absolutely nothing to show when it comes to even measuring, much less reducing, human trafficking.

While Matt Gaetz may be among the latest high-profile evangelicals to be credibly accused of sexual impropriety, he’s hardly alone.

If these groups really wanted to end sex trafficking and protect women in the sex trade they’d support fully decriminalizing sex work. Every credible human-rights organization, including Amnesty International, the American Civil Liberties Union, the World Health Organization, and the Lancet agrees that decriminalization reduces human trafficking, improves public health, and creates safer working conditions for sex workers. Yet none of these groups support this initiative. If Gaetz did in fact pay a 17-year-old for sex, that is certainly icky, if not illegal. The fact that the DOJ and major media outlets describe this as sex trafficking speaks to the influence of evangelical lobbying; pushing sex trafficking as a pervasive threat redirects attention away from the very real abuse perpetrated within and by evangelical purity culture by creating a moral panic around a hugely exaggerated threat of sex trafficking. By disempowering women, encouraging male sexual entitlement, and eschewing accountability mechanisms, evangelical purity culture creates the perfect environment for male leaders to abuse their women followers. Sex workers are simply collateral damage in the war against sex they don’t like.

This helps explain why the mass shooting in March that killed eight people, including six Asian women, at two Atlanta-area massage parlors, hit home for many people raised with evangelical rhetoric. The shooter, who was heavily involved in the Southern Baptist Church, told Atlanta police that he had a sex addiction and sought to remove the “temptation” he saw in massage parlors. “When many Christian women (and women who’d left the church) heard the killer’s motive, they thought, ‘That’s an extreme version of an idea that I was taught for years—that men need to protect themselves from women, from me,’” French wrote. It’s a reminder that the vast majority of violence against women in America isn’t new: Instead, what there is today, what there has always been in America, is an unrelenting culture of rigid gender hierarchy and sexual shame that leads to sexual violence and a series of sexual moral panics—promoted with lies and enforced through state violence—created to protect the stability and fecundity of the nuclear Christian white nationalist family. The real sexual abuse epidemic isn’t men in vans holding women at gunpoint. It’s the men in our homes, our churches, our schools, and our workplaces. It’s men like Gaetz, and the ideologies of abuse that they promote.

Read this Next: A Man Walks Into a Day Spa 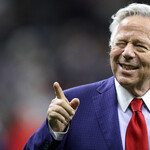 by Nora Salem
The case of Robert Kraft and Orchids of Asia is the latest coda to an old story. 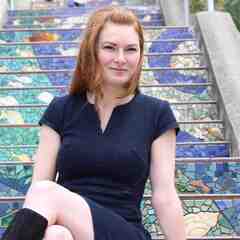