#MeToo and the Media’s Responsibility to Survivors | Bitch Media 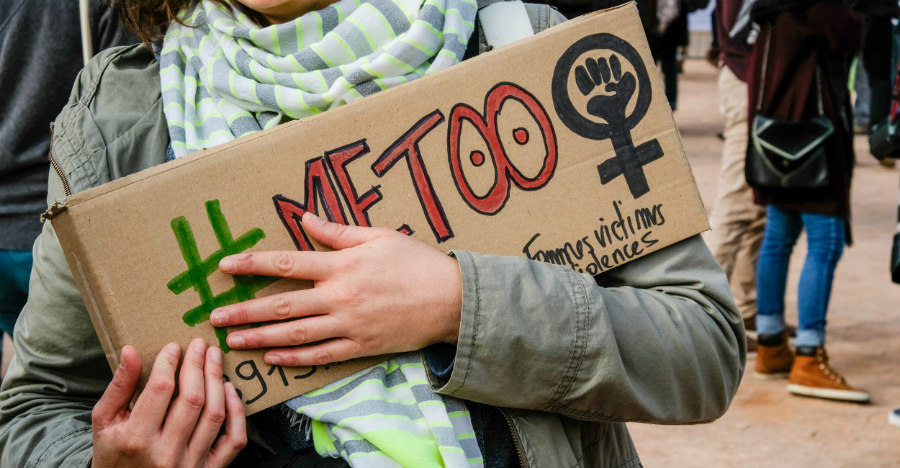 This story was originally published on December 27, 2017.

When it comes to sexual violence, the media can be either a powerful ally to survivors or their worst enemy. Over the past few years, and especially the past few months, we’ve seen examples of both.

In 2014, Rolling Stone ran “A Rape on Campus,” a story detailing the alleged gang rape of a student named Jackie by members of the Phi Kappa Psi fraternity at the University of Virginia. The Columbia School of Journalism investigated the report and found many discrepancies in Jackie’s story, which they believed were fabricated. It also found that Rolling Stone neglected to fact-check her account, leading the publication to retract the story in its entirety and give rape apologists and skeptics even more reason to discredit survivors.

We’ve also had the powerful New York Times and New Yorker exposés on Harvey Weinstein that brought a seemingly endless reckoning of high-profile serial predators. In the time since, the sexual violence perpetrated by men in power has surfaced in the news cycle nearly every day. Some of these men have faced consequences: Al Franken resigned from the Senate; Kevin Spacey won’t appear in the final season of House of Cards; and The Chew fired celebrity chef Mario Batali. 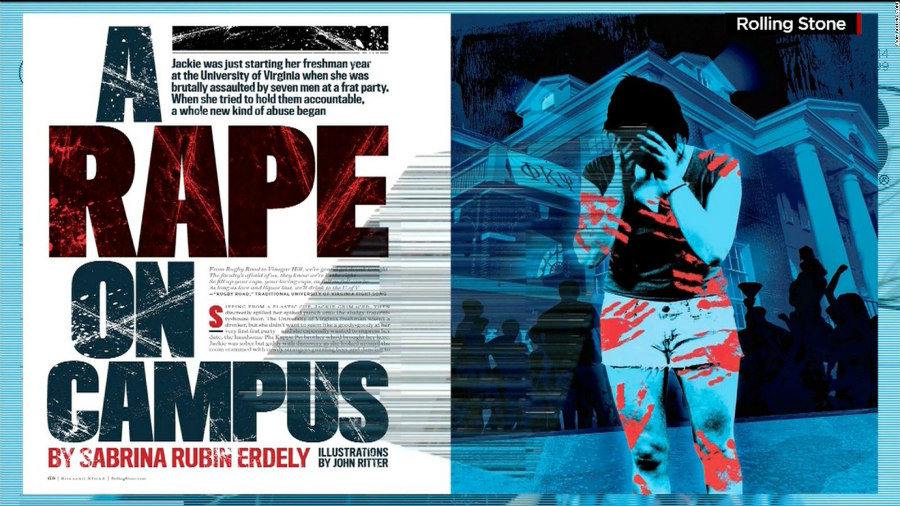 The momentum of #MeToo shows the media’s power to help shift society’s views on sexual violence. Yet, in a society steeped in patriarchal values, the media often perpetuates rape culture. A 2015 study by Australia’s National Research Organization for Women’s Safety found that the media often shifts the responsibility for sexual violence from the perpetrators to the victims, and uses sensationalized language to better capitalize on these stories. Even in the post-Weinstein apocalypse, news media is still publishing op-eds about dressing modestly to “avoid” sexual harassment, and editors continue choosing headlines like “The Witch Hunt of Senator Al Franken.”

If we have any hope of creating a safe world for marginalized communities that’s free of sexual violence, the media must change the way it covers sexual violence. Shedding light on the pervasiveness of sexual violence is integral in the fight to end it, along with better understanding the social context behind it. As a survivor, I share my experiences publicly in an effort to highlight and critique the many ways our society and institutions perpetuate further violence against survivors. As part of my anti-rape advocacy, I became a freelance writer and have had to face mainstream media’s notoriously frustrating editorial process. I’m often told by journalists with far more experience in the industry than me that “it’s just the way it is,” but let’s face it—“the way it is” no longer cuts it.

I had my first negative editorial experience in April when I pitched Teen Vogue a personal essay on the stealthing study that ran in the Columbia Journal of Gender and Law. The study touched on how hesitant victims of stealthing are to identify their experience as sexual assault, which sparked a very passionate and visceral reaction for me. While I wasn’t “stealthed,” condom use is an important emotional and physical boundary that my rapist knowingly violated when he sexually assaulted me.

I knew I had to write about it, and I hoped that sharing my story would give people the language they needed to process their own sexual assault. Teen Vogue’s “Not Your Fault” vertical seemed like the perfect platform, so I anxiously pitched my idea on April 23. Within 12 hours, an editor accepted it and asked me to submit a draft on May 1. On April 26, my editor asked if I could turn it in that day, so I pushed myself to write and file the story by April 27. Although I submitted the draft early and checked in with her a couple of times over the next week, she never responded.

On May 15, she finally responded to my emails and asked me to rewrite the piece as an op-ed because Teen Vogue “can’t publish anything that identifies someone as a sexual assault perpetrator unless there is documentation” because it would put the magazine in legal jeopardy. I knew that my story was important, and understood the publication’s legal responsibility, so I submitted documentation. After the editor stopped responding to my emails yet again, I decided to pull the story on June 1 and published it with Wear Your Voice on June 6. It’s emotionally taxing to write about my assault, so initially giving myself a week to write the story afforded me the space to mitigate its impact on my mental health. I pushed that personal boundary per this editor’s request, and stringing me along for six weeks was a blatant disregard for the emotional labor that I put into writing about my trauma.

Editors must be mindful of the toll it takes on survivors to write about their assault, and must be transparent about the editorial process. If people want to align themselves against the culture that allowed Weinstein to abuse women for so long, publications need to build trust with survivors so that their stories can be told. To start, editors and journalists must change the way they work with sexual assault stories and survivors. Shortly after the Weinstein expose, FLARE Magazine commissioned me for an essay on how I was dealing with being bombarded by sexual assault stories on social media. When I submitted my first draft, the editor’s feedback was that it needed a more “catchy” title, and suggested “I Was Raped and Here’s How I’m Navigating the Weinstein News Cycle.”

Not only was it poorly written, but that particular headline operates on the assumption that readers only engage with stories about trauma that focus on the violence. Clickbait titles aren’t a new concept in digital publishing, but on the heels of #MeToo, it reads as exploitative. Of course publications need to generate advertising revenue, and interesting headlines are part of that, but focusing on the violent details of our assault misrepresents our experiences and leverages violence to increase their bottom line. Media coverage should foster empathy for survivors by acknowledging the violation of our very humanity instead of defining us by the violence we experience.

Unfortunately, it’s not only editors who mistreat survivors—journalists are part of the problem too. A freelancer working for The Walrus Magazine recently interviewed me for a story on the importance of sexual consent, and a few weeks later, told me that they’d be contacting my rapist for comment on the story. They said that it wasn’t a question about my credibility, but they were interested in seeing if he had any remorse for what he’d done.. I expressed that I was concerned for my safety and that I didn’t want my rapist contacted because he’s actively leveraged rape myths and outright lied to avoid accepting responsibility for violating me. He knows where I live, and he’s mentioned wanting retaliation against me—I wouldn’t have put it past him to act on that desire. 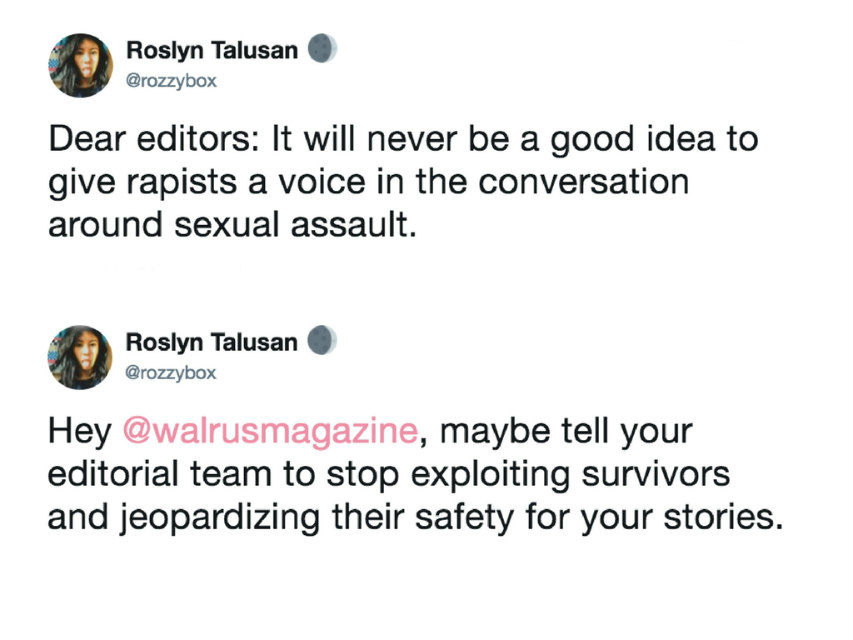 Yet, the writer insisted on contacting him anyway. “Our story explores #MeToo as well as #ItWasMe, which is one way that people guilty of sexual assault are coming forward and admitting the heinous acts they’ve committed,” they explained in an email. “It’s about getting men to admit responsibility and starting a wider conversation about how widespread assault is.”

It wasn’t until I tweeted about this experience that the writer apologized for the misunderstanding, and explained that for legal purposes, my rapist had to be offered an opportunity to respond. Oddly enough, I spoke to another writer at Walrus Magazine about my sexual assault earlier this year, and it didn’t involve them chatting with my rapist. Both journalists and editors continue to perpetuate rape culture by humanizing rapists in the media, ensuring their fair representation, and soliciting them for their perspectives. This writer assumed that my rapist was a rational person, and that he wouldn’t try to come after me for being vocal about my experience. If he was truly worthy of the humanity being afforded to him, he wouldn’t have raped me.

Of course there are legal and ethical standards that must be followed in the reporting process, but journalists must inform survivors of those steps upfront so that they can make an informed decision as to whether or not to share their experience publicly. Had this writer told me from the get-go about contacting my rapist, and not completely backtracked when I called them out, I would’ve felt safer and more respected. If we have any hope of shifting our view on sexual violence, journalists must respect boundaries and maintain the safety of survivors who trust them with their stories.

The media has the power to affect real progress by amplifying the voices of survivors and victims, but first they must be willing to put in the work to do and be better. Survivors must have an environment built on empathy and trust when coming forward, and we need editors and journalists to foster an atmosphere where we are empowered and feel safe to tell our stories. The world needs to see that we are much more than attention-seeking, profitable content generators—we are survivors who deserve to be respected and heard, and most importantly, seen as human.

Relevant: From #MeToo to #WeConsented