by Erin Thompson and Sonja Drimmer 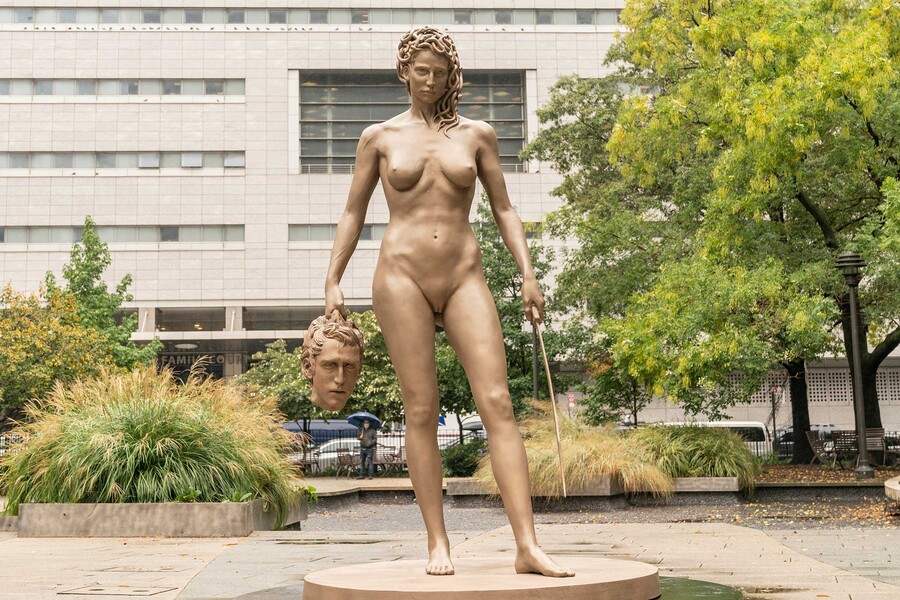 View of Medusa With The Head of Perseus sculpture by Luciano Garbati, which was unveiled in Collect Pond Park in honor of the #MeToo movement (Photo credit: Lev Radin/Pacific Press/LightRocket via Getty Images)

Recently, the New York Parks Commission installed Luciano Garbati’s 2008 sculpture of a sexy Medusa—a re-imagining in which the cursed woman of myth holds the severed head of Perseus—across from the New York County Criminal Courthouse in Lower Manhattan. A press release noting that the courthouse is “the location of high-profile abuse cases including the recent Harvey Weinstein trial” hyped the statue as a symbol of “victim-shaming in stories of sexual violence” and a “monument to the #MeToo movement.” In 2018, a decade after its creation, Garbati’s sculpture became a viral sensation, an avatar for a global reckoning with sexual violence. In the ancient Greek myth, Medusa was a beautiful young maiden who was raped by Poseidon, transformed into a snake-haired monster and banished by the goddess Athena, and then murdered by the hero Perseus. Garbati’s sculpture offered an ostensible rethinking of the myth, a reclamation of the fearsome figure known more for a stare that turned men to stone than she was for the victimization that made her monstrous.

But the statue’s relocation as a reminder of the continued fight against systemic sexual violence has also reignited a debate about exactly what it stands for. Critics argue that this rendition of Medusa’s idealized body reinforces the idea that only women who look like her deserve justice after experiencing sexual violence. Others, including art critic Jerry Saltz, have proclaimed that the sculpture is just bad art or take issue with the subtext suggesting that women can only access power if they play by men’s rules. And then there’s the question of this Medusa’s curiously smooth, Barbie-like nethers: Where are her snubes? But though criticisms like these point to some of the sculpture’s failures, the bigger problem it embodies is the long historical pattern in which male competition plays out in the exploitation of female suffering. Garbati’s sculpture doesn’t actually reverse the ancient Greek myth. Rather, it counters another famous sculpture: Italian Renaissance artist Benvenuto Cellini’s Perseus with the Head of Medusa, which was installed in 1554 alongside sculptures by Michelangelo and Donatello in Florence, Italy.

Cellini depicted Perseus as a youthful, idealized nude standing over the conquered and contorted body of Medusa beneath his feet. His eyes gaze down at her mangled corpse as one hand holds aloft her severed head, tendrils of blood spiraling from its neck. Garbati has said that his intention was to humanize Medusa, but if he truly wanted to reframe the myth of Medusa in the name of justice, he would have sculpted her holding the head of Poseidon—the god who raped her. But Garbati’s real goal was to one-up Cellini—another man—so he had to refer to Cellini’s sculpture and put Perseus’s head in Medusa’s hand. When interviewed about the piece, Garbati claimed, “I always had this particular version of Cellini in my mind. And reading about the myths, I felt that it would be interesting to depict the myth from Medusa’s point of view.” How telling that the artist refers first to Cellini (this version of Cellini) and only secondarily to Medusa herself.

In effect, Garbati was trying to create a place for himself in the art world by upstaging his artistic forefather, an age-old practice in which men seek to achieve wealth, power, and fame by eclipsing their male predecessors. Often it is women who are the collateral damage of these conflicts. Garbati’s statue, whether intentionally or not, continues this tradition. The Oedipus myth shows how well the ancient Greeks understood this idea. According to the myth, an oracle predicted that King Laius would be killed by his own son, so Laius ordered his wife Iocasta to kill their newborn child, Oedipus. The baby was left on a mountain to die, but a shepherd rescued and raised him. Ignorant of his parentage, Oedipus eventually kills Laius and marries Iocasta. When locasta learns the truth about her new husband, she dies by suicide. To Sigmund Freud, the myth symbolized all boys’ desire to outdo their fathers and take possession of their mothers. This myth ignores locasta’s suffering, overlooking the loss of her child and her husband as well as the subsequent shame and despair she experiences.

The male-dominated art world is no stranger to Oedipal conflict. Take Picasso, an artist who gained fame for his Demoiselles d’Avignon, an enormous painting from 1907 that showed sex workers staring menacingly at the viewer. When Picasso wanted to reinvent painting, he decided to take a radically new approach to the female nude. Every artist since the Renaissance had shown his skill by painting beautiful women, usually given the names of mythological goddesses. When it came time for Picasso to outdo his “fathers,” he didn’t just turn the mythological Venus into a whore; he turned her body into a jagged nightmare of confrontation—and spent his life abusing the women who served as his models. Picasso’s story mirrors that of many other male artists: Film director Bernardo Bertolucci assured his place in cinema history with his hugely successful 1972 movie, Last Tango in Paris, whose infamous rape scene was unexpectedly sprung on the film’s 19-year-old star, Maria Schneider.

To inspire ongoing fights for justice, we need fewer imaginary women and more real ones, whose power is actual and not merely mythological.

She didn’t know that her costar, the much older Marlon Brando, was going to pin her to the floor, rub butter on her anus, and mime raping her. “Even though what Marlon was doing wasn’t real,” Schneider later told the Daily Mail, “I was crying real tears.” In a 2013 interview at a French film foundation, Bertolucci tried to justify his manipulations, saying that “I didn’t want Maria to act her humiliation, her rage, I wanted her to feel her humiliation.” Anything to get the shot. Garbati didn’t directly abuse a woman in making his Medusa, but in claiming that his competition with an artistic “father” should take the space and public attention that could otherwise by filled with the voices of female activists, his work commits another kind of violence against women. Garbati’s supposedly innovative Medusa with a sword isn’t even the only armed woman in the neighborhood.

New York’s courthouses, like courthouses across America, feature representations of Justice personified as a woman holding scales and a sword—almost always made by male sculptors. But the U.S. justice system has long ignored the crime of rape, placing often insurmountable barriers in the way of getting to a courthouse to put a rapist on trial. Garbati’s Medusa is another in a long line of artistic false promises. It pretends to give power to women, but does nothing real to help them attain justice. Garbati’s Medusa is only temporarily installed in Manhattan. Though she’ll be gone by next spring, we’ll still be debating the kinds of sculptures we want in our public spaces. Whose lives should be represented—and who should make the choices about that representation? To inspire ongoing fights for justice, we need fewer imaginary women and more real ones, whose power is actual and not merely mythological. Allowing a man center stage to play out—yet again—an artistic rivalry with another man through the portrayal of a woman’s body is hardly a step in the right direction. 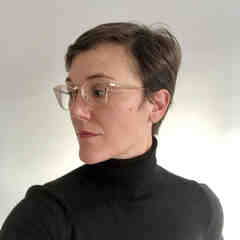 Erin Thompson,  America’s only full-time professor of art crime, is working on a book on disputes over public monuments. Follow her on Twitter for updates. 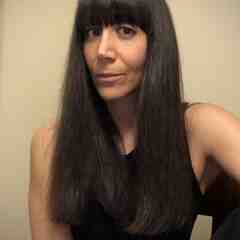 Sonja Drimmer is a historian of medieval art and architecture. She teaches at the University of Massachusetts Amherst. Follow her on twitter.