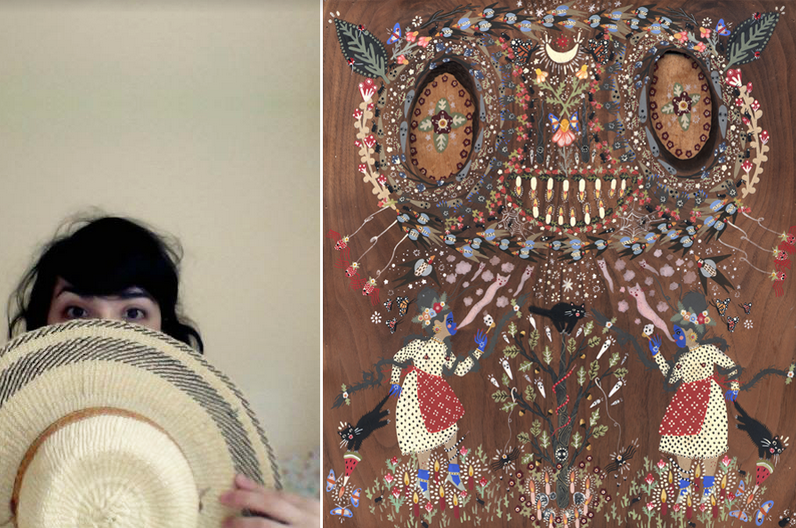 Rebecca Artemisa’s connection to the natural world is evident on a first glance at her bright paintings, which teem with leaves, flowers, clouds, and friendly fauna. The central figures of Artemisa’s “painted spells” are young women with long black braids, stepping through candles and mushrooms, teardrop-shaped ghosts billowing from pipes in their mouths. In a world that keeps getter weirder, appealing to other realms makes more and more sense; and Artemisa’s beliefs in heritage, self-care, and dialogue between human and nature offer a sense of both tradition and possibility.

What motivates you to do the work that you do? And how is the current political situation impacting your work?

My family motivates me! I know that sounds very generic and broad, but I really do draw so much inspiration and motivation from them. Learning self-care and self-love as a little child of color is so vital and sometimes so hard, but there was a strong sense of wonder and gratitude for the world and for our ancestors. The fact that I am a queer, Mexican American woman with Indigenous heritage and that I stay painting and drawing and writing, I feel, is an act of resistance from the get go, but especially now in our current political climate.

The feeling that being creative is an act of not only resistance but of survival was instilled in me at a very young age. Both sets of my grandparents grew up in very large families and in complete poverty, but both sets found their place in the world through activism and art. On my Mom’s side, my grandparents were community leaders in the Farm Workers Movement. On my Dad’s side, my grandfather was one of the first men of color to work on Madison Avenue in the 1960s. He was an art director for an ad agency, and then later went back to Mexico City to pursue a freelance career in art direction and painting. Both my parents are very involved in their communities, and have continued in their parents’ footsteps of art- and community-based activism and work. They’re very supportive of me, but are always asking, “So I see you’re working on this, but what are you working on next? Will you make bigger paintings someday? Have you thought of painting this [insert random idea here]?” It keeps me on my toes! When I sit down to paint I give thanks to all of them first. They’ve survived and thrived and that’s my reminder for me to keep going.

Throughout history, women who act in opposition to patriarchy have been accused of witchcraft, or demonic possession, or otherwise having supernatural powers. Recently 1980s televangelist Jim Bakker was one of the D-list celebrities who attended Trump’s inauguration, and commented that seeing the Women’s March caused him to feel “the most evil spirit I’ve ever felt.” What is it about feminine power and the supernatural that gets people so freaked out?

I’m rolling my eyes at that Jim Bakker quote. Now, if he was voicing concern about how a lot of folks who took part in the Women’s March needed a crash course in navigating intersectionality (shoutout to Kimberlé Crenshaw!), then maybe we could possibly be on the same page of criticism, but I know he wasn’t. But in all seriousness, my wife and I were just discussing this very subject. We’re constantly trying to come to terms with why displays of feminine power rattle the patriarchy. She’s white, transgender, and a lesbian, and since I am a queer, cis woman of color, we are almost constantly unpacking these thoughts and conversations. You’d think it would be exhausting, but it’s actually quite healing.

Generally speaking, I think people are scared of what they don’t know, and many people take that fear to a place of anger and resentment. The way a lot of people deal with that, particularly people in positions of power, is by demonizing others. So many of us—“us” being women, butch, nonbinary, intersex, femmes, etc.—know our power, know our worth, and that flies in the face of what we’ve been told about ourselves. It’s much easier for some patriarchal Christian bro to say that we’re possessed by demons than it is to sit down and really listen to why we are fighting, why we are angry, and why we are not going anywhere. To call a woman (or anyone who isn’t a white, cis-het, able-bodied, Christian male) names until we go away is the oldest, laziest trick in the book. Unlike the mysteries of the supernatural, we have all the answers here with us in the present. I think it scares them that we have tangible solutions to problems we face—if they acknowledge that, they won’t get to benefit from that power dynamic anymore.

You describe yourself as a “bruja who paints spells.” Can you talk a little bit about your process and the intersection of art and spiritual practice? How does your feminism inform your spellwork and vice versa?

I almost always paint on wood, castoffs and scrap from my dad’s woodworking projects. This alone feels very special to me, because it’s panels cut from an old, long fallen tree, then handled by my Dad who saves them for me. There is so much sacrifice and love in that already! I usually light a candle before I start painting to calm the atmosphere of the room. My paint pallets are seashells that I found as a little kid (I’ve actually been using them as paint pallets since I was 14), so there is always a little bit of the sea in my paintings. If I am painting grass or mountains or dirt, I rub in actual grass and clovers to add color and also make the painting feel more alive. Almost all the girls and femmes I paint have pitch-black hair, and I achieve this by rubbing palo santo ash into the paint, or scorching just a little straight onto the wood panel. Sometimes I stain the wood with blackberries or tea. I put good intentions and love and conversation into my paintings. It feels like a spiritual ritual, like casting a spell, when I paint.

On the feminism side, as I learn more and listen to others, I am working on delving deeper into painting things that hurt me or make me uncomfortable or that are very obviously intimate. I hold myself back sometimes when I want to explode with emotion in my work, or to express something deeply spiritual. It’s wild because I always thought of myself as a reasonably confident and expressive person, but only lately can I see how much I’ve internalized from society to be quiet and to hold it in. Now I’m starting to be like, “Let yourself explode! It’s just paint! It’s just letting go of emotion in a room!”

What is the difference between a bruja and a witch?

I often think they are the same thing, but I feel pride in my gut when someone calls me a bruja. That word is so powerful. It was initially meant to silence us, but I feel happy when I hear someone call me a bruja. So the difference is largely a cultural one, and not even a big difference at that. Being called either bruja or witch means you’re powerful, especially if someone means it in a bad way.

Here in the capitalist United States we find ourselves in a time of “witch chic,” where Urban Outfitters is slinging sage and crystals and there are sacred symbols being co-opted and sold as fashion accessories. What do you see as the benefits, and the problems, that come with this collective interest?

I like that people are getting more into crystals and burning candles and herbs to find peace and happiness in their lives. That is a very personal, spiritual, and beautiful thing, and I love that it’s less stigmatized now! But I don’t like spirituality being intensely commodified, and cultural appropriation of [witchcraft] is rampant and quite damaging. I don’t want to speak for all cultures or even entirely for my own, but it is so incredibly hurtful to have a white person—or any person not of my heritage—tell me how much they “get” my culture and that their appropriation of the bruja/curandera/Indigenous culture I’m connected to is okay. It’s essentially a fun aesthetic for them to try on and sometimes even exploit for monetary value, when for me it is how I am trying to decolonize and heal. It’s not just white folks, though. Everyone has a role to play in respecting these older, more indigenous rituals and belief systems. I would encourage people to work hard on not taking up space in someone else’s, but remain as informed of other cultures as possible. You can love a culture but not appropriate it—I promise, it’s possible.

I recently picked up your zine Curandera Sweetie and I really love the community-based healing model that it embodies. In the Trump era, what is the role of the curandera?

I am so glad it came off that way. I wanted everyone who read it to hopefully feel a little more healed afterward. I am sure that the need for calling a curandera for una limpia (a cleansing spell that uses an egg to absorb bad energy) has skyrocketed during this regime! I believe curanderas will continue as they always have. You cannot stop healers from acting on their callings. Many of these practices have been around long before European contact, and survived unbearable strife and genocide with incredible grace and love. We cannot be stopped.

What advice do you have for Bitch readers as we settle in for a long resistance against this administration?

I have a simple revolution spell I’ve been working on for a new comic. Here you go! 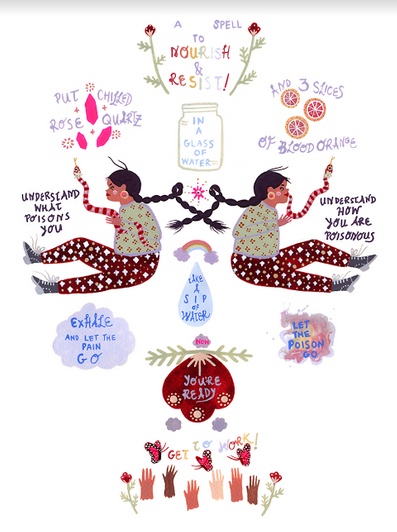 What are some of your favorite representations of the bruja in pop culture? And what pop culture are you currently consuming?

I watch lots of creepy ghost video channels on YouTube, and particularly love the strange, recent viral videos of alleged brujas on brooms flying over the rural Mexican countryside. I also loved the little Abuelita in one of those Paranormal Activity movies who has her little altar in the dining room where she does some brujeria spells to try and protect her grandson from being possessed by a demon. Drama! I also love the story of La Llorona. I feel like she is referenced surprisingly often in pop culture—I’ve seen her referenced in things from stand-up specials to horror movies. The strange thing is, La Llorona isn’t a bruja. She’s just a woman, and then later a ghost, but she gets called “bruja” a lot. I think it’s interesting that a a complicated, wildly variant woman in a complicated, wildly variant story is considered a bruja. In terms of my own pop culture consumption of late, I can be found at almost any hour of my weekend watching shows about the paranormal. I especially love Ghost Adventures, The Haunted, and Paranormal Witness. 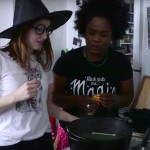 by Cate Young
Billed as a “witches brew of comedy, camp, and commentary,” the five-episode web series Bwitches, cocreated by best friends/roommates Johanna Middleton and Martine Moore, tackles everything from dating to racial microaggressions from the perspective of two women of different races.