From the JunkyardMeg Lionel Murphy Paints Through Trauma 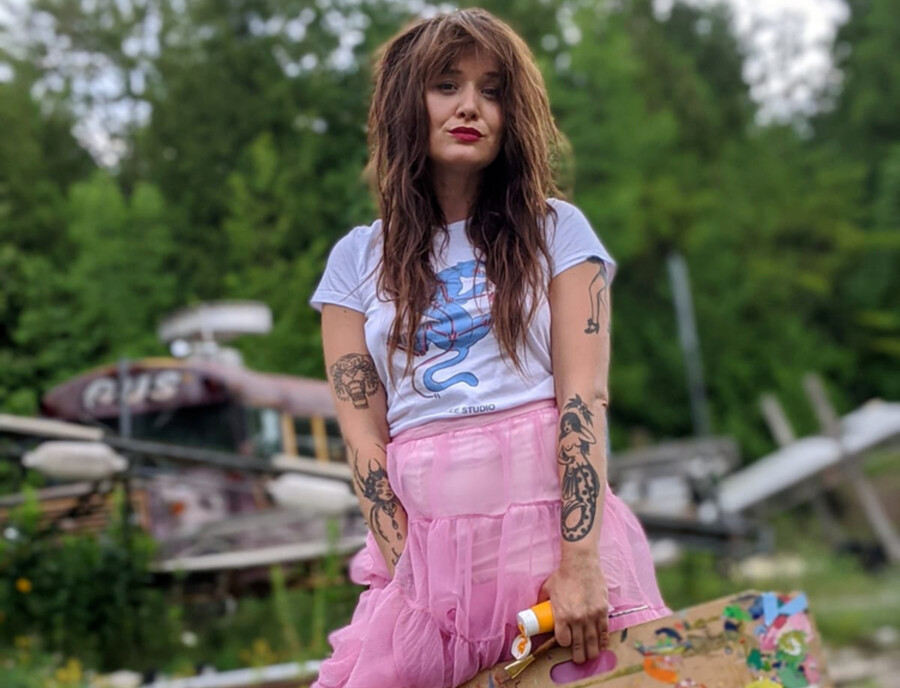 The beauty of art, especially when it has a mission, is that it gives us access to new worlds, ones we step further into the longer we look into an image. One artist doing such work is Meg Lionel Murphy, a painter who works from a little blue shack on her family’s property in Wisconsin. Her paintings are vivid and colorful, appearing at first to be lively and perhaps even happy and comfortable, but a longer look gives the viewer access to the truth behind her work, which comes out of pain. A survivor of domestic violence who has PTSD, Murphy uses her work to engage with her own trauma as well as trauma as a concept. It’s through the giant women, surrounded by plants and animals big and small who lie across the canvases she produces that Murphy offers viewers the ability to dream of a better world—and a safer one too.

I met Murphy online through her work with Paper Darts, where she’s the editor-in-chief. I was excited when she announced in July 2020 via an Instagram post that featured her standing tall in a long, layered pink skirt, hair wild, atop a tractor body, that she is officially represented by the Untitled Space gallery in New York, which will debut her first solo show with them in 2021. In honor of the occasion, Bitch spoke to Murphy about her artistic process, how she brings accessibility to art, and how she translates trauma to the canvas.

At first glance, your work appears fun: It’s bright and colorful, with greens, yellows, and warm colors that evoke feelings of happiness and comfort. But when a viewer looks for just a second longer, the image immediately warps into something more sinister. Several paintings show women holding miniature men in their large hands or grimacing as bears or other animals lurk over their shoulders.

I want there to be a sense of danger. I think of them as war paintings: I’m holding trauma and pain inside of the paintings, but I also want them to be in homes. I want them to look bright and happy and for people to be able to look at them and feel almost [as they would about] a great pop song: It’s dark and dreary, but there’s a beautiful melody. I want it to feel both of the ways: dark and urgent, but also soft and interesting. I want it to be everything.

I moved to Wisconsin because I knew I had that show, and I needed to focus and make the work. It changed my life. It’s exciting to think of an entire space as a canvas, and it’s something completely new for me. One thing I loved about that show was that I used actual doll furniture for all of the pieces in the work: Every single object in the work was based on a very real piece of doll furniture that was then [placed] throughout the space. It was very interactive. It was very popular with kids and teens across the gender spectrum, and it became my favorite part of the show to see all of these kids being giants themselves—one little girl said, “I’m a giant!”—and seeing that reflected in the painting. It was really exciting and powerful. They became the art more than I expected. I’m excited to work with Untitled in New York, and I’m going to need more space to create work to fill a decent-sized gallery. I’m looking at finding a local warehouse where I can make bigger work like that and think about bodies moving through space and how I can make them feel like the giants in my paintings. 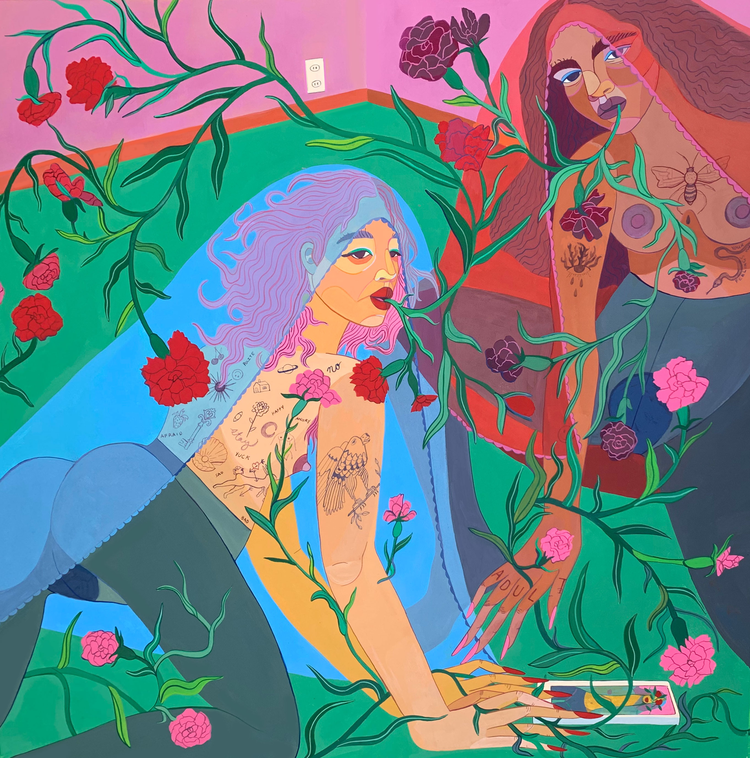 You’ve also had online shows, such as an online solo exhibition with The Untitled Space. This definitely adds to the accessibility of your work. How do you think about audience building? At what stage in your process, do you think about where you want your work to live?

Instagram has been huge for me. I don’t have a large following, but I get a lot of DMs from women who really connect with the work. I hear their stories, I hold their stories, and I think about the wall that this [painting] will live on. It’s kind of what the work is about—a sharing of stories. I really do believe that Instagram is such a great way to democratize art and [that] art is changing because of it. Instagram is almost my favorite way to show work. I did have my first solo show in Minneapolis before the pandemic hit in March, and there were people in the gallery crying and sobbing—many people actually—and it really moved me. I cried with them. And we still talk. In the future I’d like to weave their stories into the work. It’s a lot of make believe and fantasy, but it is rooted in real people’s stories and pain. I’m so glad to [be making] work in this time; I couldn’t live here and work here without Instagram.

That’s interesting because when I was growing up, it felt like art was untouchable. Going to the museum was stressful rather than interactive and engaging.

Absolutely. I love that it can work on those levels. A lot of the content [in my art] is adult, as there’s a lot of pubic hair, lots of violence, all of these things that I love, but that we hide from the world too much. I love the idea of making it exciting, colorful, and safe. I’m surprised by how much the idea of children [shifts the way I’m] thinking about the work. I think a lot of the word “infantilization” for women. Are we saying the idea of wallowing—I’m saying that word carefully—is that infantilizing women? There’s a lot of discourse right now around that. I’m not afraid to go back into the world of childhood trauma or think about how painful it was to be a girl back then. It’s something I’m trying to work out right now.

Why is it important that the women are, as described in a blurb defining your work, “giant”?

I have had extreme, debilitating PTSD. I mean, very, very, very, very bad. I couldn’t function really. I needed fantasy in order to survive. I needed to project some kind of safety and something to hold on to—an idea of autonomy of my own body. It was so empowering to be able to paint these large bodies that are unconquerable. Right now, I’m painting this big painting that’s five feet long and three feet wide, and it’s going to be a billboard in New York City. It’s all of these women and nonbinary characters all twisted together. There are these little tiny soldiers with flags that say mine, and swords, and it melts in and out of the landscape. It’s a battle scene. But in my mind, the giants are going to win. It is a fantasy; I don’t know if that’s the world where we live, but I need that space [to exist in some way] in order to live.

How do you approach new work?

Right now, I’m working within a world and I have my own timeline. There’s a point of trauma that I imagine for different women I’m painting. They’re us, they’re in their homes, they’re in fetal position. There’s a lot of pain, and then they keep growing and growing and growing, and then they’re in this nature-space. I’m imagining them building worlds for their giant bodies. They can’t fit in our worlds anymore. It’s not linear, but I bounce back and forth. It’s interesting to me because that’s how trauma works; I don’t think we heal from trauma. Some days I’m in a fetal position, and some days I’m bigger than my adversaries. But I think I’ll stay in this world for a while. I don’t know if I’ll ever leave it.

One thing I really enjoy is watching the way the paint evolves. I bought an airbrush machine, and all of my work is really flat, and I’m excited to see if I can make it grittier or bring in some gradients. The challenges now are with form rather than idea or content, especially since I’ve been in rural America for a year or so. It’s inspiring to me, especially with this election, to see what rural America is right now. I see a lot of reporters come into Wisconsin, and the way they describe Wisconsin is hilarious to me, it’s just so weird and [doesn’t] feel like the Wisconsin I grew up in. It’s interesting to examine whiteness and gender from this perspective. I want to challenge myself to be more rooted in place.

Read this Next: New Gazes 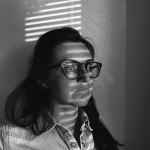 by Eva Recinos
Women photographers no longer have to rely solely on mainstream acknowledgment of their work.