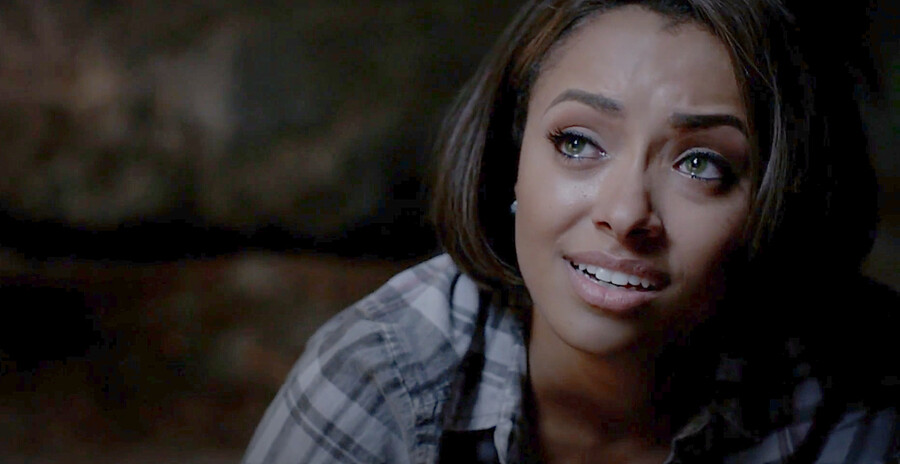 Kat Graham as Bonnie Bennett in The Vampire Diaries (Photo credit: The CW)

On July 17, while recovering from surgery after being allegedly shot by fellow rapper Tory Lanez, Megan Thee Stallion tweeted, “Black women are so unprotected [and] we hold so many things in to protect the feelings of others [without] considering our own.” The tweet was a thoughtful rumination about the ways Black women are expected to be strong, even when they have been harmed—and even when their pain is a joke to others. Many of the responses to her tweet, however, were neither thoughtful nor helpful. One such response came from TV writer, director, and producer Julie Plec. “I believe black women are going to save us all and i am so sorry to put that pressure on you,” Plec wrote in a now-deleted tweet, before quickly undercutting the sentiment by adding, “but white women are continually failing all of us. I hope you understand that me seeing you as a hero is not meant to add to your anxiety—rather it’s to lift you up and celebrate you.”

It’s not the first time Plec has put vile demands on the shoulders of Black women; in fact, her bias has been clearly reflected in her work. In 2009, Plec, one of the creators of The Vampire Diaries—the CW’s supernatural drama series based on the book series by L.J. Smith—introduced Bonnie Bennett (Kat Graham) to the world. Bonnie is the best friend to Elena Gilbert (Nina Dobrev), the show’s white protagonist, and she lives in a world of white people she’s meant to protect. Mystic Falls, the fictional Virginia town where the series is set, is a dangerous one. Its residents are regularly killed by vampires (and, sometimes, by werewolves). Bonnie herself is a witch, and while she’s certainly not the only character who’s traumatized by the evil in Mystic Falls, the show’s writing offers her more peril and less care than her white counterparts. Part of this is intrinsic to the character: For Bonnie, prioritizing herself comes second to protecting the show’s white main characters.

In the Season 1 episode “Fool Me Once,” for instance, Bonnie’s grandmother, Sheila (Jasmine Guy), dies after helping Bonnie cast a difficult spell that’s meant to save a friend’s boyfriend. There seems to be no compelling narrative reason for Sheila’s death: Why would Bonnie risk her own life and that of her one close family member to protect her best friend’s boyfriend? It’s a frustrating plot point—but it’s just the beginning of an arc that finds Bonnie losing it all to protect her white friends. Bonnie’s powers as a witch grow stronger with each of TVD’s eight seasons, but the character feels like a perpetual token, her arcs never fully developed like those of her white counterparts like Elena and their other friend, Caroline (Candice King): her character is rarely tended to and centered.

Instead, Bonnie dies over and over again, coming back to life only to be offered up as a sacrifice so that her white best friends can pursue true love with hunky vampire brothers Stefan (Paul Wesley) and Damon (Ian Somerhalder) Salvatore and live unique, dramatic supernatural lives. In a tiny town in a state filled with reminders of slavery—high-school parties take place on an estate whose cellars used to house enslaved Black people—Bonnie is an outsider to events where her white best friends shine. She is the epitome of a “magical negro”; she’s expected to protect her white friends and accept that her pain and grief is less than theirs, and viewers internalize this and consider it normative, rather than biased. (Meanwhile, Black men fare no better in the series, as evidenced by later plotlines that show Black male warlocks suffering horrible and graphic deaths; in the world of TVD, teenage heartbreak carries more weight than the pain and murder of Black people.)

“It’s no secret that black women’s representation on screen has lacked the depth and complexity of their experiences in the real world,” Kovie Biakolo wrote in Pacific Standard in 2019. “While flattened or stereotyped portraits of black women have a specific and pernicious history in the United States, the power of American cultural exports ensures that, from Hollywood blockbuster films to raunchy reality TV, black women around the world end up facing the consequences of these erroneous perceptions.” From reality television to classic teen films like Clueless to popular mainstream TV series, Black women fall to the wayside, reduced to tropes and minimal screen time compared to their white counterparts. Elsewhere, musicians like Summer Walker and Janet Jackson are judged for their mental-health struggles, and artists like Normani are faced with overwhelming disdain by critics and audiences alike.

All Black women deserve more than to have white women project their needs and desires onto them in their most painful moments.

Throughout popular culture, Black women are continually dehumanized, and our demands of not only their work and their personas, but of their literal existence, become increasingly invasive. Which brings us back to Plec, a wealthy white woman demanding something of a Black woman only days after she was violently harmed. Megan suffered multiple gunshot wounds less than two weeks ago. She has been open both about the trauma it’s caused, and the additional trauma that has come from being mocked, her pain disregarded in favor of the projections and demands of others. “It might be funny to y’all on the internet and just another messy topic for you to talk about, but this is my real life and I’m real life hurt and traumatized,” she tweeted about the response to the incident. And yet white women saw it fit to ask even more of her, a clear prioritization of their needs, and a clear dismissal of her own.

Plec says she sees Megan as a “hero” and someone to “celebrate.” But we see her struggles to understand the humanity of Black women expressed in her literal work. Was Bennett being lifted up and celebrated when she lost her grandmother, her father, almost lost her mother, and nearly every Black family member she had through horrible, public, violent events? The slaughter of her family took place not only on behalf of her white friends, but in front of them, her family’s pain becoming a learning experience for them. Was Bonnie lifted up as the only one in her trio of friends to end up without a true love? Was she celebrated when she had to groan through the pain and agony of accepting each and every dead person’s soul walking through her own body—just one more sacrifice she made to save her white friends? Bennett deserved better. Megan Thee Stallion most certainly does. And all Black women deserve more than to have white women project their needs and desires onto them in their most painful moments.