In “Girlhood,” Melissa Febos Embraces the Monster Within | Bitch Media

The Act of Naming“Girlhood” Embraces the Monster Within 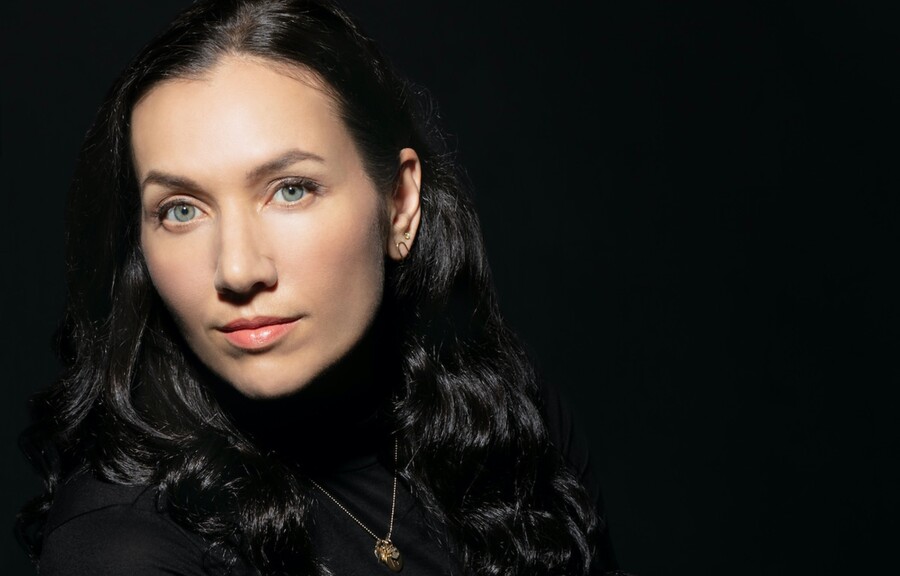 I can still vividly recall the first time I was called a slut. It was the middle of my freshman year of high school, and I’d recently broken up with a senior on the lacrosse team (whom I’d shared my first kiss with weeks before). Unsurprisingly, this same guy—along with the rest of the lacrosse team—hurled the epithet at me as I walked to class. The label stuck. This lie, fabricated by a boy who most likely felt spurned and embarrassed, became an undisputed truth among the rest of the senior guys, leaking into the social circles of our school to thwart me at every romantic juncture. But let’s face it, my experience was far from unique. Getting called a slut is par for the course for teenage girls.

“Slut is a word that men invented, like witch, to maintain power over women,” Melissa Febos writes in her new memoir, Girlhood. Febos—who, much to the delight of the boys in her neighborhood, hit puberty at a young age—was forced to learn the pernicious implications the word carried early on. Of course, pejorative gender-coded names and tropes have long been deployed to collapse and control the narrative around the female body, and those who identify as girls and women. “Sometimes the word itself matters less than the authority with which it’s spoken,” Febos writes. “It is the act of naming that claims you.” Girlhood, which comes four years after the publication of Febos’s critically acclaimed memoir Abandon Me (2017), explores the complicated themes of love, self-obliteration, and restitution that suffuse her previous works. But, through lush, pleasurably painful essays like “The Mirror Test” and “Intrusions” she’s written a memoir that, written like a retrospective, function as an anti coming-of-age story. It’s a raw, intimate elegy for an innocence that was never hers to begin with and a recovery of the self, both divine and corporeal. To this end, she revisits moments in her past in which her agency was compromised, covering her adolescence, which was punctuated with surreptitious assaults by her friends’ older brothers; her early 20s in New York, in which she was juggling a heroin addiction and an internship in book publishing; and delving into the control and release she found in working as a pro-domme who spat on male clients who “paid 75 an hour to enact their disempowerment.”

She later makes the connection between her gig and the fact she’d once been spat on a decade prior by an older boy in her neighborhood. It was a confounding aggression that dovetailed with her transformation from a flat-chested girl to a fifth grader who’d gained a body with the “power to compel but not control,” not unlike a “superhero or a monster.” This assault signaled the start of an interminable hazing that befalls young girls as they move into the male gaze, which “tell[s] us punishment is reward, that disempowerment is power.” This violence follows Febos throughout her life, manifesting in multiple ways: a fallout over her “promiscuous” reputation at school, when her physicality and desire became a monstrous, untamable thing, and decades later in a volatile, all-consuming affair she had with another woman (an experience she hauntingly recounts in Abandon Me). The violence was at times subtle, too. Febos walks us through an experience at a “cuddle party” she attended with her girlfriend in her early 30s. In a space where safety was presumably prioritized, she found herself giving “empty consent” to emotionally relieve a lonely man who wanted to spoon. Saying yes when you’d rather say no, Febos writes, is “the legacy of centuries of abuse and oppression.”

The paradox underscores the tension that lies between consent and dissent. How does one reconcile the two when the narrative is out of our control? If you want sex, you’re a slut, if you don’t, you’re a slut or loose. As Febos writes in a recent piece for the Paris Review, “loose” (a term often elucidated with the redolent image of “throwing a hotdog down a highway”) was a sobriquet she initially earned purely because of her body, “though in my case it became a self-fulfilling prophecy.” Disparaging words like loose are often woven into stories we’re told about ourselves, and “what our value is, what beauty is, what is harmful and what is normal.” Febos considers them to be a part of the fabric of our indoctrination as pleasure-giving objects in a male-dominated society. “This training of our minds,” Febos writes, “can lead to the exile of many parts of the self, to hatred and the abuse of our own bodies.” And that’s exactly their purpose.

Once the woman is cast as a monster, Febos posits, she joins a subhuman category. In the 15th century, a Dominican monk named Heinrich Kramer published Malleus Maleficarum, a treatise that, using unhinged logic, basically argued the right for men to prosecute witches as heretics. “Women, he thought, were lower even than other animals…and witchcraft was the result of their insatiable desires,” Febos writes. “Make the woman a beast of low morals and perverse passions…make her humanity monstrous. Now you can do anything you want to her.” That ethos has outlived Kramer and is still imbued in the culture we consume. Consider the trope of the “slut” in campy horror movies: Generally the one to die first, she’s punished because of her want, sacrificed for the good of a cautionary tale. I inhaled every movie from the Friday the 13th franchise during my teens, and still to this day won’t have sex in a tent for fear of some kind of twisted retribution.

This dehumanization of the deviant female calls to mind other insatiable women in movies I devoured growing up. The one that looms largest is Ursula in The Little Mermaid (1989). She’s the antithesis of the inferior, diminutive princesses I’d looked up to. And yet, there was something so glamorous about the life she carried out in isolation. She seemed liberated. Writer Carmen Maria Machado also shared a similar fascination with the ostentatious Disney villain. “Ursula was magnificent,” Machado wrote in a 2017 article for Guernica. With breasts that spilled out every which way, she donned bright red lips and “lived in a palace made from the skeleton of an ancient leviathan and ate trembling shrimp from a seashell dish.” In essence, she inhabited a place outside the constraints of a society that reveres women who take up as little space as possible. Sure, she was ostracized for her lavish, libidinous ways, but living off the grid allowed her to continue, as Machado puts it, “existing audaciously.” Looked at through a feminist lens, she is an aspiration.

This amendment in perspective forms the basis of Electric Literature editor-in-chief Jess Zimmerman’s new book Women and Other Monsters: Building a New Mythology. Reframing the stories of 11 iconic female monsters in Greek mythology, Zimmerman asks, what if we (“we” encompassing “people who identify as women” and those “who at some point have been seen and treated as women”) were to harness rather than repress our monstrous qualities? Embody them fuller? In Greek mythology, beauty is perceived as dangerous, female ambition is to be feared, and female rage even more so. This, writes Zimmerman, “is one of the legacies we’ve inherited from the classical era…a suspicion of women in general, a feeling that every one of them may have claws and tails if you look below the waterline.”

It tracks that these myths were told by men: Ovid, Homer, Virgil, Sophocles. The female monsters in Greek mythology are foul and hideous, with snakes instead of tresses, barking dogs for legs and heads, and feathered birdlike bodies that “drip with disgusting discharge.” But they didn’t start out that way. Before, they were human, until, that is, they threatened to complicate the power structures built to oppress them. “These are the bedtime stories patriarchy tells itself,” writes Zimmerman. In classic Greek mythology fashion, the traditional traits of the hero, like courage, selflessness, and mobility, were “annexed as masculine,” while the feminine protagonists were to be bastions of “passive sex appeal and fragility”—in other words, damsels in distress. The monsters, Zimmerman writes, were “intended as warnings about what happens when women aspire beyond what we’re allowed.” They were lessons in avoiding “Too Muchness,” a particularly female affliction of being too much of really anything (too loud, too confident, too slutty, too happy, etc.) that culture writer Anne Helen Petersen devoted a whole book to unpacking and defending.

Take, for example, Medusa, the patron saint of epic female monsters. Though Medusa’s known for her unmatched hideousness, many often forget she was once beautiful—until Poseidon raped her. Outraged that the defilement went down in her palace of all places, Athena cursed Medusa, turning her famed tresses into snakes that turn anyone who looks upon them to stone. Medusa’s crime? Being too pretty. As punishment for her “bottomless hunger,” Charybdis was hurled by Zeus into the sea, sentenced to live the remainder of her life as a voracious whirlpool, claiming “countless ships in her everlasting greed.” Loathed as these mythological monsters were, though, their power was boundless. Medusa’s ugliness became her most effective weapon. “Where beauty is narrow and constrained, ugliness is an entire galaxy,” writes Zimmerman, “a myriad of sparkling paths that lurch crazily away from the ideal.”

In their departure from norms and expectations, in no longer being palatable, ready to be consumed for the male eye—or what Febos and Zimmerman evocatively refer to as the “panopticon”—these women-cum-monsters were free to wreak havoc and air their rightful grievances. Instead of internalizing these tales as warnings, Zimmerman argues, we could read them as an invitation. The Furies, hellbent on justice, could be a lesson on focusing and nurturing our rage for good. Think of the Hydra, with her multiple, thrashing heads, as what intersectionality could look like. We don’t all have to get along, but we can “gestate dissent and deviation,” Zimmerman writes. “This is our strength: That each of us has the capacity to be not only the monster but a mother of monsters.” As Wren Sanders reports for them., trans artists have taken back the trope as an act of resistance. This reckoning with the female monster has also spawned a recent slew of novels, like Rachel Yoder’s Nightbitch, in which a lonely stay-at-home mother believes she’s transforming into a dog, and Chelsea G. Summers’s brilliantly campy A Certain Hunger, which follows a successful writer whose lust for life leads her to cannibalism. We live in a society that rewards us for participating in our own (and others’) oppression, where women starve their bodies to fit within beauty standards, diminish their presence to placate men, divorce themselves from their anger to be taken seriously. But try as we might to deflect them, the structures will always exist. The narrative isn’t going anywhere: We’ll still be called sluts, witches, and harpies, so we may as well rise to the occasion.