Back in January when 45 made his tasteless, racist, and severely misinformed comment about Haiti being a “shithole country,” Haitian Canadian singer-songwriter Mélissa Laveaux remixed Auguste de Pradines’s “Angeli-ko,” a century-old song with a covert political message about imperial power, and shared it on social media. “Angeli-ko” is said to poke fun at the poor housekeeping skills of Angelica Cole (“Angeli-ko” in Creole), the wife of Lieutenant Colonel Eli K. Cole, who helped the U.S. Marines invade Haiti in 1915. The lyrics might seem misogynistic, but bad cooking and cleaning is actually a metaphor for the United States’ occupation of Haiti from 1915 to 1934.

The album’s name was inspired by Bann’na Siwèl, rural troubadour orchestras that travelled Haiti from village to village to spread their music. “I used these old folk songs as an inspiration and adjusted them to my style,” Laveaux said in her album press materials. “I’m fond of the concept of a radio… the idea of transmission.” Like the Bann’na Siwèl, Radyo Siwèl brings age-old tunes to audiences through repetition and retelling, reworking Jean-Claude’s covers of traditional vodou folk songs such as “Lè Ma Monte Chwal Men” and “Kouzen.” While Laveaux pays attention to the melodic and lyrical power of such songs, she also takes some liberties in rearranging pieces to harmonize, often on traditional vodou spirituals such as “Simalo” and “Twa Fey.” 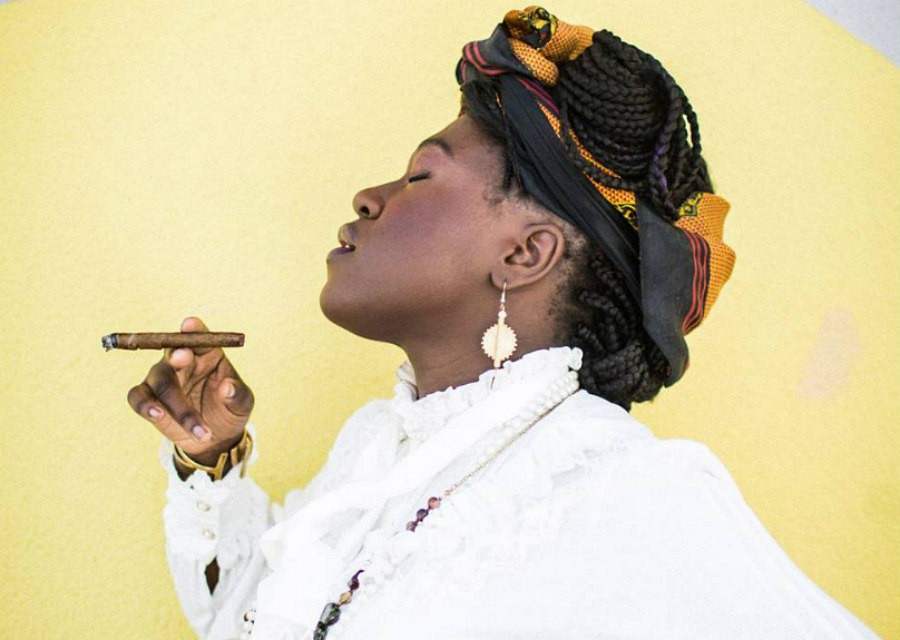 In addition to doing research in Haiti at the Centre d’Art and national archives for the album, Laveaux also dedicated herself to researching 20th-century artists and ethnomusicologists like Alan Lomax, Katherine Dunham, and Zora Neale Hurston. Since many of these folk songs were never recorded and are almost impossible to find, Laveaux was able to make interpretations that are uniquely her own. Her version of “Nibo” is a stark contrast to Ludovic Lamothe’s original 1934 piano composition, but she still captures the song’s joy by adding a percussive section and guitar riffs, maintaining the song’s looping refrains with the addition of an indie jam-session vibe. Similarly, “Lasirèn la balèn” is a no-frills duet that comprises only voices and percussion, while “Jolibwa”—one of the album’s original songs, recruits an African xylophone to tie the album to the sensibilities of traditional songs.

Though Radyo Siwèl was on Laveaux’s mind for more than a decade, she postponed the project until she was able to travel to Haiti. Despite educating  Laveaux and her siblings about the glorious history of the first Black nation to liberate itself from slavery and colonization, her parents decided not to teach their children Creole. “[My parents] wanted us to assimilate to Canadian society as seamlessly as possible,” she writes in the album’s liner notes. But by overhearing her mother’s vocal cadence on phone calls with friends and family, Laveaux picked up the language’s rhythm, as well an assortment of expressions and proverbs. Instead of accepting that the Creole language would forever be lost to her, Laveaux recovered her voice and made space for herself in the intergenerational broadcast of Haitian culture and heritage.

As a result, Laveaux’s voice takes on a new quality that’s distinguishable from previous albums. Now, her pride is palpable. Her voice, though always controlled and powerful, takes on the effect silky smoke escaping the chimney of a wood-burning furnace—the fuel of liberation in her core. On more uptempo tracks, like “Nan Fon Bwa,” Laveaux conveys a convivial atmosphere through the levity of her voice and electric guitar.

On “Lasirèn la balèn,” the voices begin in a whisper and mount as the song continues; attending a live performance is the only way to get the complete experience. (Laveaux began touring the album before recording it, as a live set that included reading between songs from Tell My Horse, Hurston’s 1938 book about her experiences in Haiti and Jamaica.) Though Laveaux currently lives in France, her longing for homeland and her devotion to ancestors is palpable; she insists on speaking about her joint Haitian and Canadian positionality in interviews, and carefully researches the songs she chooses to cover with an emphasis on mobilizing against U.S. imperialism.

She adds her own flair, for instance, to Frantz Casséus’s “Nan Fon Bwa,” a rebellious track about nature, fertility, spirituality—and voodoo. “Nan Fon Bwa” names necessary elements for voodoo practices, and then explores how people retreat to the woods for Yanvalou dancing and voodoo ceremonies. By learning Creole, Laveaux reclaims relationship to the language of a heritage that has always been part of her and waded into the creative possibility of delivering voices from her Haitian ancestors to the present.

For all the archival omissions and cultural static, Laveaux admirably demonstrates that it’s possible to carve out new spaces where we can all transform, dream, inspire, and ricochet diasporic sounds—and pay credit where it’s due.

Billie Eilish’s Body Is Not Ours to Claim