Part of Your WorldImagining the Modern Mermaid 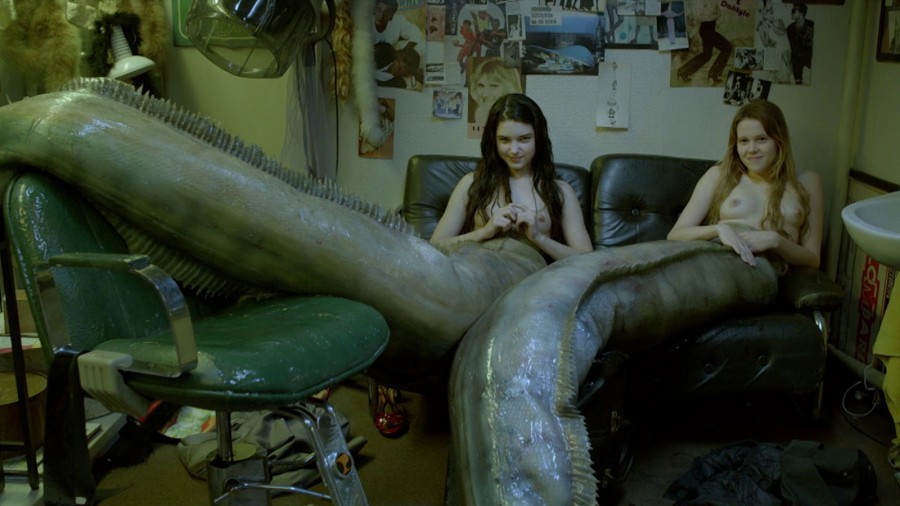 Michalina Olszanska as Golden and Marta Mazurek as Silver in The Lure (Photo credit: Janus Films)

This story contains spoilers for The Pisces.

We are in the mermaid era. Mermaids are making a splash, appearing in beauty products, as a profession, and in a recent batch of movies and books. Following the release of the Academy Award winning film, The Shape of Water, highly anticipated novels like Melissa Broder’s The Pisces are upending our notions of passive mermaids—and depicting mermaids as creatures of agency.

Though mermaids have long been the domain of young girls, adult pop culture offers the opportunity to explore their symbolism, wrapped in death, (sexual) desire, and impossibility. Traditionally, mermaids are temptresses like the sirens who lured men to their deaths in Greek mythology; Kirsty Logan, whose upcoming novel, The Gloaming, follows a mysterious mermaid impersonator, told The Guardian, “The story of the mermaids is the story of a very male sort of fear, the fear that a woman is always going to leave you or destroy you.” In Hans Christian Andersen’s 1837 Victorian morality story, The Little Mermaid, that fear is channelled into telling young girls specifically that they should eschew their “inner mermaid,” the parts of themselves characterized by freedom, agency, and both sexual and nonsexual desire. In Disney’s version of the story, Ariel’s original desire is to explore the human world. Her father already dislikes this, and when Ariel falls in love, he is even angrier at her wish to leave the sea for good. What’s more common than the fear of a girl’s desire to experience the world?

We see the same fear in films about real girls like Real Women Have Curves (2002), The Virgin Suicides (1999), and more recently in the acclaimed Turkish film Mustang (2015). In all three films, parents pressure (and sometimes force) their daughters to remain innocent and “pure” because they’re afraid of the girls’ changing bodies, minds, and their ability to conceptualize sex, pleasure, and choice. None of this purity protection “saves” these young women. In Mustang and The Virgin Suicides, girls end their lives because they aren’t allowed to grow into their own bodies, experience psychological and physical shifts, and find their place in the world. Andersen’s little mermaid accepts her fate to die and dissolve into seafoam. 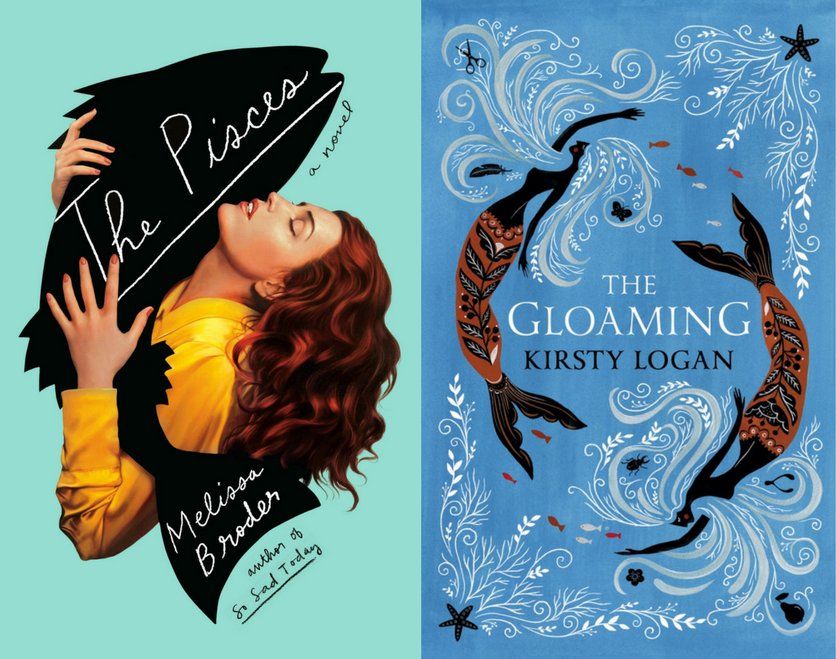 Covers of The Pisces and The Gloaming

But Disney princesses don’t die. Instead, Ariel must get married in order to experience something new, eliminating the period of self-exploration and teendom and returning to a heteronormative, settled-down life.

Though the mermaid represents the idea of sexual freedom, her vagina is obscured by a tail. We can only speculate about how they do it. In The Shape of Water and The Pisces, aquatic males have a phallic penis. That nobody can or wants to imagine the (biologically) female equivalent suggests a society’s deep uncertainty and disinterest in what women want. Folklore tells us mermaids want men’s lives and blood, trading promises of beauty, sexual fulfillment, or knowledge as ploys. Andersen tells us that when a young woman loves, it has to be the pure, chaste, Christian kind—and even then, she must be restrained: The little mermaid loses her voice, refrains from killing the prince, and settles for 300 years or more of proving that she is good enough to one day receive a soul.

Mermaids are often depicted as young women, so it makes perfect sense that they crop up in teen movies—so many of which are already about love and the necessity of finding it. In Aquamarine (2006), the titular mermaid wants to find love. She ends up finding platonic love instead, which placates her father. In the 1999 Disney film, The Thirteenth Year, Cody (Chez Starbuck) experiences strange changes on his 13 birthday and discovers he was adopted and is actually a merman (a great metaphor for puberty!). Rather than finding romantic love, Cody is given the opportunity to spend a summer in the ocean with his birth mother and make sense of his changes. While young adult and adult mermaid literature tends to sway into dramatic romances, children’s literature authors are pursuing other kinds of ocean narratives instead of forcing mermaids to change their bodies and minds to fit on land. Still, most mermaid narratives settle on love because that’s what a mermaid must want—a woman in love, who has no other desires, is an easily digestible concept.

What’s more common than the fear of a girl’s desire to experience the world?

The alternative is sex, and as a by-product, reproduction. It’s a terrifying and prominent concept in mermaid horror. The straight-to-TV films, She Creature (2001) and Dagon (2001), both feature  frightening death and impregnation scenes. The creature in She Creature controls men’s minds, eats a few, and somehow impregnates a barren woman. In Dagon, a man is captured in a Spanish town that worships a demonic sea deity by sacrificing men for blood and sending women into the deep to be impregnated by the god. In the Polish horror film, The Lure (2014), mermaid sisters Golden (Michalina Olszańska) and Silver (Marta Mazurek) struggle with their desires; Golden wants to eat humans while Silver wants to make a human fall in love with her. Silver’s chosen beau is disgusted when, after surgically swapping her tail for legs, her surgery scars bleed (a code for menstruation and fertility gone wrong) when they try to have sex. He marries someone else and Silver turns to seafoam like Anderson’s little mermaid; Golden kills him.

Though new mermaid media attempts to reevaluate these fears about young women’s sexuality, some fall into similar traps. In The Shape of Water, gender swapping the mermaid isn’t enough to eliminate the pop culture narrative that women are not quite human and therefore must be made complete through love. The protagonist, Elisa, feels “less than whole” because she is mute, implying that only a “monster” is capable of loving a disabled woman. Sans tail and youth, Elisa still embodies the struggles of the typical mermaid narrative: She must navigate a point of change in her life, and only love can save her.

Broder’s novel The Pisces is far more effective in revamping this tired mermaid narrative. Though male, the oceanic scent and appearance of the merman’s tail is related to pussy and some of his behaviors are coded as female. Both the merman and Lucy, the human who falls in love with him, navigate what it means to desire—and be desired. Explicit eroticism lets the novel materialize the connections between sex, desire, and emotion. Unlike so many mermaid narratives that punish their female characters for desiring new experiences, Broder allows Lucy the space to explore, question, and to be uncertain. She fails often, but it’s not the end of her world. That Lucy has options at age 38 counteracts the societal narrative that women reaching 40 must “settle down” and that finding love is the primary motivation for young women. Though Lucy describes herself and the merman as intermingling complimentary parts from the same womb, she steps away to find fulfillment elsewhere. Indeed the whole novel is about Lucy eschewing obsessive love for her family, for her intellect, and for herself.

But what happens to the mermaid? Lucy vaguely imagines her merman’s counterpart, but quickly forgets about it.

The ocean has long been associated with the female. In the fascinating myth of Aphrodite’s motherless birth, the ocean fills in as womb: When the titan Cronus’s castrated genitals fall into the ocean, Aphrodite emerges from the resultant seafoam (semen). Mermaids like Golden, She Creature, and Dagon, who want to stay or return to the ocean, and maybe drag humans with them, are considered evil—satisfied in their lives without the love of a man. Golden’s appetite is insatiable; She Creature wants her freedom and will do anything to get it back; and Dagon is actually evil. None are afraid or ashamed of what they want and who they are. (Dagon probably should be). She Creature implicitly performs the “male” function of impregnating a woman, discarding the heteronormative dichotomy between male and female. The mermaids that want to acquiesce to land and mankind, like Ariel, Aquamarine, and Silver, are coded as good because they are willing to give up essential parts of themselves to be human—and find love. Because these good mermaids want to leave the ocean and all its potential for adventure and desire in exchange for heteronormative love, their stories tell us that as a society, we’re still not able to conceptualize women’s lives—even women with tails—as being fulfilling without romantic love. 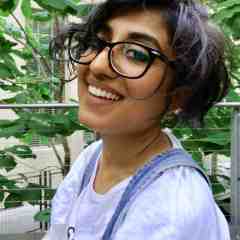 Kari is a culture writer and poet based out of Brooklyn. You can find her recent work in New York Magazine, Oxygen, Spicy Zine, and Witch Craft Mag. No, she still can’t play the bass.