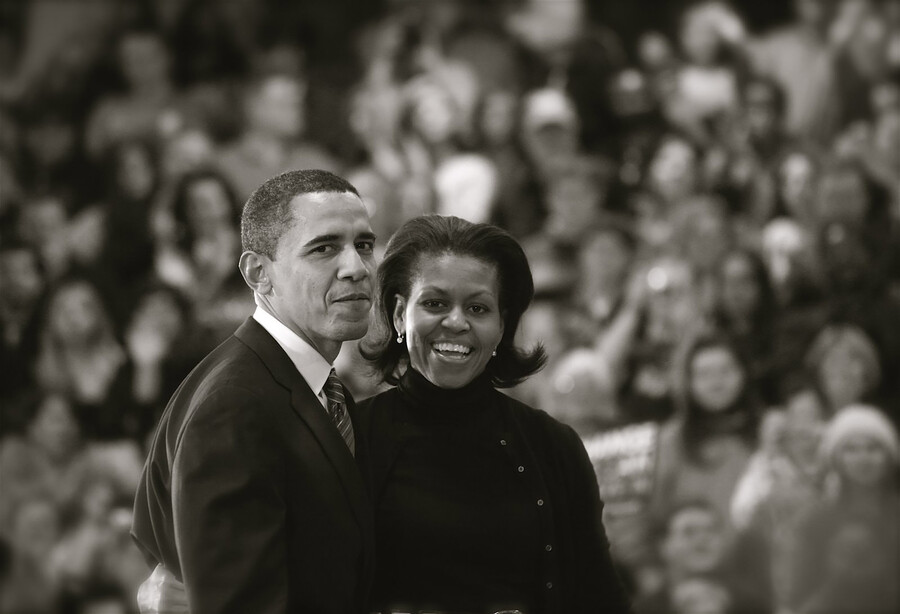 On The Michelle Obama Podcast’s ninth episode, “They Do: Talking Marriage with Conan O’Brien,” which aired on September 2, First Lady Michelle Obama invites her guest, television host Conan O’Brien, to talk about the ups and downs of marriage. Obama compares a good relationship to a basketball team, saying that it’s important to build a team that makes sense for your goals and your needs. “If we approached a marriage and family like we, particularly men, would approach picking your basketball team, we’d have better marriages,” Obama explained. She discusses her own relationship with Barack, saying that, since their marriage in 1992, there were times she wanted to push him “out of the window.” O’Brien explains his own relationship history, too, offering his take on love, romance, marriage, and (hopefully avoiding) divorce by having realistic expectations of what romantic relationships are like. The episode was, largely, fine. Neither Obama or O’Brien offer especially new advice, though that’s unsurprising considering how many dating-and-relationship podcasts already exist; the subject just isn’t new terrain.

Why Won’t You Date Me, hosted by comedian Nicole Byer, is one standout favorite: Since 2017, Byer has relatably and honestly illuminated the intricacies of modern dating, offering jokes about race, weight, and blow jobs. At the other end of the spectrum is the New York Times’ Modern Love podcast, which brings in actors like Kate Winslet and Sandra Oh to voice its most memorable columns. Everyone from Cosmopolitan to the Boston Globe, meanwhile, has a dating podcast. It’s Obama’s own presence that makes the podcast intriguing—after all, what other first lady has had a podcast, let alone one that offers such an intimate look at her own life? The goal of the podcast is simple: to look into “conversations with loved ones” and “the relationships in our lives that make us who we are.” It’s a topic that makes sense for Obama, considering her own now-indelible love story.

“[On a] surface level, I think the Obamas represent a lot of ‘relationship goals’ for plenty of folks, especially Black people,” explains Gabrielle Smith, a love and sex writer. “Women are taught to make themselves smaller for men, and Michelle is an example of someone who absolutely [did] not—and she still found happiness. “[P]eople want to know the secrets to a relationship like theirs.” Over the last decade and a half, many of us became invested in their love life and what we could learn from it. Even as Barack’s own political-icon status faltered, he and Michelle’s power-couple aura stood strong on its pedestal, even inspiring the 2016 film Southside With You, which the Guardian called a “likeable account of the Obamas’ first date.” So it was a surprise to hear Obama’s podcast offer some galling commentary about dating apps. She used Tinder as a contrast to her recommended dating style, and opined that modern dating requires more intention than that, suggesting that, in a “smart” relationship, a person would say, “‘I’m going to get off the apps, and I’m going to actually ask this girl out and I’m going to take her out for a few months; I’m gonna invest in this other person.’ And then I’m going to see where that goes.”

Obama added, “That’s what dating is. You can’t Tinder your way into a long-term relationship.” O’Brien agreed, and goes on to reference a study comparing swiping on Tinder to playing slot-machine. Online dating is a multibillion-dollar industry. With an estimated 57 million users around the world, Tinder in particular is a continued source of intrigue, with swiping success stories in the likes of Business Insider, the Washington Post, and BuzzFeed. Depending on your demographic, it might feel like dating apps are as normal as it gets. Series like Netflix’s Easy, Comedy Central’s Broad City, Fox’s New Girl, and The CW’s Jane the Virgin have all used some form of a fictionalized dating app. Books, too, are embracing the reality of dating apps, with The Right Swipe by Alisha Rai, How to Hack a Heartbreak by Kristin Rockaway, and others featuring online dating. And though both real and fictional people may or may not find true love via apps, it seems backward to scoff at something that’s already so widely accepted in popular culture. But stigma around dating apps still exists.

“[There’s] this interesting dichotomy between acceptance and rejection of dating apps. In media, we have as many examples of the possibilities that dating apps allow (thinking of Dating Around as an example) [as] consequences that uphold the idea that dating apps are ‘bad’ (such as the documentary Swiped),” explains Cameron Glover, a sex educator and host of the podcast Sex Ed in Color who has contributed to Bitch. Glover says that a part of the shaming around relationships that start out on apps like Tinder comes from their roots. “A big part of that stigma, I think, comes as retaliation or punishment for marginalized people carving space for themselves within digital tools that were never designed with them in mind in the first place.” In fact, since its beginnings in 2012, Tinder has changed and shifted as dating culture has changed and shifted, both shaping and reflecting it.

As such, some listeners expressed frustration over Obama’s largely unnecessary pivot to shaming Tinder; some tweeted about the loving, long-term relationships they were able to form via dating apps. It felt like Obama was traipsing into territory where she could have, simply, not. “It kind of seems like the Tinder statement itself is being taken out of context,” Smith said, acknowledging that Obama’s mention of the app feels like a shorthand for hookup culture and impulsive relationships, rather than careful planning with an eye toward longevity. But, Smith said, there is no one path to success in a relationship, and not everyone has the same picture of what success even looks like. “Overall, I think Obama means that relationships are work, and they are. However, I often see this perpetuation by those of an older generation that you must fight tooth and nail to keep a relationship alive. It’s true, sometimes it’s hard. Sometimes it’s really hard. But there are limits to everything.” What Obama says about marriage and dating matters because of her credibility and her audience.

What Obama says about marriage and dating matters because of her credibility and her audience.

Much of her dating advice on the episode felt heteronormative, as she talked about what men do and what women could learn from them—”A man’s inclination to wait and to go out there and search and get himself ready, I think is a good instinct that more young women should think about.”—and generally outdated. Even if her advice were directed specifically toward Black women dating men, given that that’s her specific lane, we’re beyond the point where Black women are willing to sacrifice themselves for men. When she said she wanted to push Barack out of the window, I laughed, but I also felt a pang of concern. “If I had given up on it, if I had walked away from it, in those tough times, then I would’ve missed all the beauty that was there as well,” she said. Partners, of course, occassionally annoy and irritate and frustrate each other, but as her advice continued onward, it felt like the typical portrayal of a heterosexual relationship in which not really liking your male partner is made out to be a norm, rather than a red flag.

The fact is that one in 10 adults in the United States has found a committed relationship via a dating app—a number that increases among queer people; in general, 55 percent of queer people say they’ve used a dating app compared to 28 percent of straight people. “Dating apps are an easy target because [they’ve] been utilized by marginalized communities as a way to build community, foster connection, and create our own traditions and examples of what commitment can look like,” Glover said. Dating apps aren’t the same for everyone, which feels like a thread that’s missing from Obama’s broad dismissal. “Marriage is not the only way to show that a relationship is committed,” Glover said. “And marriage still leaves out so many—queer, trans, polyamorous and nonmonogamous, disabled—people that are in relationships that are full of love, full of commitment.” In the episode, Obama and O’Brien continuously mention marriage as a barometer for success, but that’s never been true across the board, well before apps even existed.

Listening to Obama, I thought of the queer people I know who have had relationships that lasted only lasted a few years, but taught them more about themselves than they ever would have learned otherwise; to Obama and O’Brien, maybe these relationships wouldn’t count as successful. After all, the couple did break up. But both parties came out stronger in the end, a success in and of itself. At the end of the episode, Obama offers a sort of truce with listeners, saying, “No matter what, I hope this conversation gave you a chance to listen, not to me and Conan, but to yourself…the journey is always, always worth it.” While the broad generalizations of Obama’s podcast don’t necessarily hold true—on this, Smith advises, “If you take their advice, you have to take it with a grain of salt and figure out how it fits in your life”—this is one piece of advice that feels worth heeding. Listening to yourself is one piece of wisdom from Michelle Obama that many of us can benefit from—even if we do have to skip through her take on Tinder to get there.