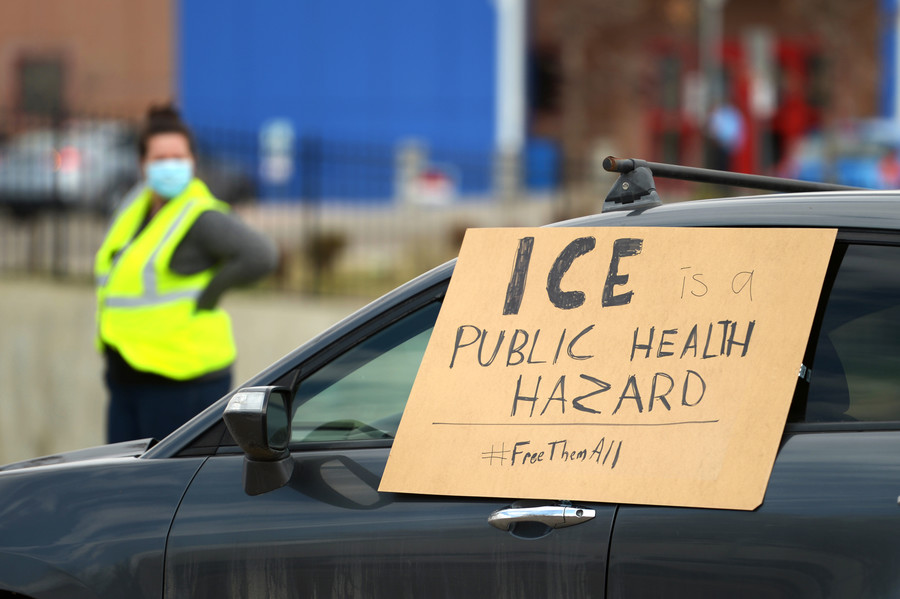 Supporters and family members inside the GEO detention center are in a car caravan to increase the pressure on ICE to release GEO detainees in front of GEO Aurora ICE Processing Center in Aurora, Colorado, on April 9, 2020. (Photo credit: Hyoung Chang/MediaNews Group/The Denver Post via Getty Images)

My cell phone rattles on the coffee table with notifications from a WhatsApp group chat for volunteers working in migrant detention centers along the southern border. It is mid-March and President Trump has officially declared a national emergency over the coronavirus (COVID-19) outbreak. “Just heard from Zoila, the women in Eloy are scared the virus is going to arrive in detention…apparently it’s been detected in La Palma and the women with husbands and sons there are really sad and scared,” the first message reads, alarmingly. Someone else chimes in within minutes, confirming cases at La Palma Correctional Center in Arizona, where migrants are warehoused in dangerous and unsanitary conditions. An incarcerated migrant provides another update: Immigration and Customs Enforcement (ICE) is selectively releasing people at higher risk for COVID-19, but she’s “not sure if it was parole or deportation. The officials don’t really say much.”

A (formerly undocumented) immigrant myself, I became part of this group chat while conducting dissertation research in the Sonora-Arizona borderlands. Studying religious practices of sanctuary and care in these militarized borderlands, I have become intimately familiar with the ways phrases like “crisis” and “emergency” are mobilized to intensify the suffering of migrant bodies. In February 2019, President Trump declared a national emergency, stating that “an invasion of drugs and criminals coming into our country” demanded the construction of a border wall—and, in the process, bypassed environmental-protection laws and destroyed sacred indigenous sites.

Now, Trump is exploiting the COVID-19 crisis to seal the southern border: Not only has his administration closed the border to all “non-essential” traffic, it has also postponed court hearings for asylum seekers trapped in sprawling refugee camps and overcrowded shelters in Mexico. Due to these travel restrictions, humanitarian aid workers cannot deliver essential supplies and services, stranding migrants outside the reach of care. Migrants who are caught crossing the Sonoran Desert are being deported instantly, without due process. But what the Trump administration forgets is that migration is never “non-essential.” For people fleeing violence, poverty, and environmental crises, it’s a matter of life and death.

Stereotypes about migrants as carriers of disease date back to the earliest immigration restrictions in the United States, though in fact it was 17th-century European colonists who first introduced widespread disease to the Americas. What is startling about this current moment, however, is how ideas of migrants as polluting and infectious are sanctioning violent border militarization. In March, the Trump administration asked Congress for $800 million for Border Patrol and ICE as part of the COVID-19 response; the funds would be used to build and repurpose detention centers as quarantine camps. An internal Department of Homeland Security memo obtained by The Nation reveals that Customs and Border Protection (CBP) has requested more than 1,500 military personnel for border enforcement, citing immigrants’ “potential to spread infectious disease.”

Even though COVID-19 cases in the United States far outnumber those in Latin America, it should come as no surprise that the Trump administration is scapegoating migrants as the emergency: White nationalism already informs current immigration policy—from Muslim bans to the termination of Temporary Protected Status for Haitians and a “zero-tolerance policy” that separates families and leads to mass criminal prosecutions of immigrants. The terrible irony here is that migrants are systematically caught and confined in unsafe and unsanitary conditions. Migrants incarcerated in New Jersey ICE facilities, for instance, are currently on a hunger strike to protest the lack of hand sanitizer and personal protective equipment alongside guards’ failure to use gloves and masks. (“They haven’t done any cleaning. We spent three days without soap,” reported one migrant who is incarcerated.)

Conditions in ICE prisons and migrant shelters have long been a public-health crisis. Last summer, Vox reported that a lack of clean drinking water, soap, tampons, and other personal-care products yielded outbreaks of flu and lice in a Texas Border Patrol facility. The New York Times described a “chaotic scene of sickness and filth” at the same detention center, vividly detailing the stench emanating from soiled clothes, foul breath, and sweaty children. In December 2019, Customs and Border Enforcement refused to provide flu vaccines to detained migrants in California, a practice that medical professionals have declared the real “emergency.” Border control is undeniably rooted in white supremacist ideas about migrants as impure and unclean. The task of immigration agents, then, is to purify and order the unruly borderlands.

Eugenics and racial codes of purity shaped the creation of the U.S. Border Patrol in 1924. In her 2010 book, Migra! A History of the U.S. Border Patrol, historian Kelly Lytle Hernández explains that early enforcement tactics included kerosene baths and humiliating delousing procedures that were justified at least partly by ideas that Mexican bodies were dirty and diseased. She highlights head shavings at ports of entry as “hygienic rituals” that “buried a mechanism of social subordination within a public health program.” Labeling migrants agents of pollution continues to this day—from the inclusion of HIV on the list of diseases that justify turning away immigrants to the eco-fascist support of California’s Proposition 187, which that rested on ideas that migrants contribute to traffic congestion and air pollution to the closing of the southern border because migrants are responsible for, as Trump put it, “tremendous infectious disease.” Nationalistic racism tells us that migrants infest, infect, and invade the homeland.

From Puritan settlers who sought to purify the Church of England to MAGA enthusiasts who romanticize a return to a white Protestant America, a binary of “dirty” and “clean” structures our everyday lives.

As a religious studies student and scholar, I am trained to question how religious rhetoric and ritual endures in “secular” societies. From Puritan settlers who sought to purify the Church of England to MAGA enthusiasts who romanticize a return to a white Protestant America, a binary of “dirty” and “clean” structures our everyday lives and delineates who does and doesn’t belong in the body politic. Anthropologist Mary Douglas famously defined dirt as “matter out of place,” the substances and bodies that transgress boundaries and transcend limits. In her 1966 book Purity and Danger: An Analysis of Concepts of Pollution and Taboo, Douglas remarks that “the body is a model that can stand for any bounded system. Its boundaries can represent any boundaries which are threatened or precarious.” Migrant bodies spread defiantly and transnationally, threatening to disrupt the nation’s imagined purity. Our bodies are labeled dirty because we refuse to stay “in place” and expose the porousness and instability of national boundaries.

Religious studies teaches us that bodies matter—that it is through sensorial and affective engagements with the world that we create meaning. Drawing on Douglas, gender theorist Judith Butler argues against Christian philosophers who dismiss the body as meaningless and representative of the fallen state of mankind. Bodies are marked, disciplined, and excluded by social scripts and discourses. Bodies also negotiate, perform, and assemble. Butler’s more recent book, Precarious Life: The Powers of Mourning and Violence, is concerned with bodily vulnerability and the ways in which we are “undone” by the other. For example, when we lose someone, we also lose ourselves—or at least the self they conjured. When we long for and love another, we open ourselves up to being wounded.

This is perhaps the real threat posed by migrants. In transgressing borders, we reveal an uncomfortable reality—all humans are dependent on one another, bound to one another, designed to long for the other. The border-crossing movements of migrants exemplify Butler’s argument: We are “socially constituted bodies, attached to others, at risk of losing those attachments, exposed to others, at risk of violence by virtue of that exposure.” Migrants throw into question the illusion of boundedness and distance, showing we are interconnected across borders—a reality that transnational movements for liberation from the Black Panthers to the Palestinian Liberation Organization have long pointed out. Emergencies can be times to reevaluate categories of pollution and dirt and rethink our relationships to one another—even if and when we are separated by national borders.

Sophie Smith of the abolitionist humanitarian group No More Deaths wrote a thoughtful essay in an October 2017 issue of South Atlantic Quarterly in which she reflects on crisis time at the southern border. She insists that even though the emergency is being weaponized to militarize the border, crisis time also invites dynamic and creative modes of action. The virus offers new forms of going viral with our activism. For example, the WhatsApp thread I referenced at the beginning of this essay is organizing abolitionist campaigns to #FreeThemAll, bailing migrants out of jail, and partnering with other groups to offer direct aid. Smith’s essay offers a prophetic vision for our current pandemic: The crisis is not migration, but rather the material and ideological construction of migrants as polluting. As the President announces a 60-day ban on immigration, we must reimagine contagion as an inevitable part of being human. We are tied to and dependent on one another—across screens, walls, and borders.