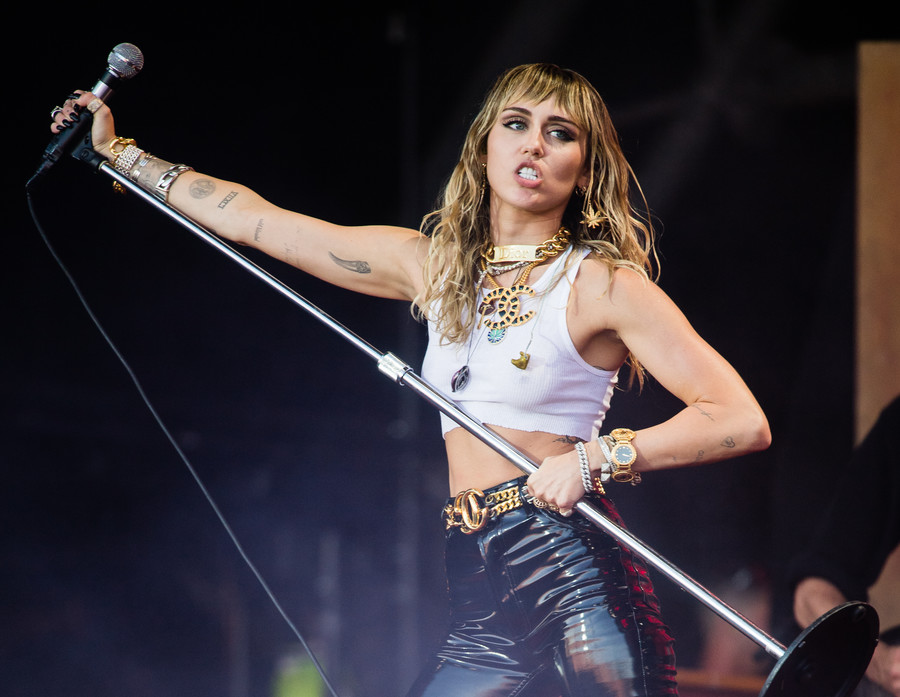 Skepticism, erasure, and exclusion is nothing new for bisexual and pansexual people. Some of the most prevalent and harmful stereotypes and accusations about—and even within—the LGBTQ community are about Bi+ people (people who are bisexual, pansexual, or non-monosexual), so it’s no surprise that queerphobic hell broke loose when Miley Cyrus, who’s been outspoken about being pansexual, announced her split from husband Liam Hemsworth in August 2019, with the separation immediately followed by her dating women. Cyrus and Hemsworth met in 2008 on the set of The Last Song, began dating in 2009, and were engaged twice prior to getting married in December 2018, when Cyrus was 25. Many people were rooting for their marriage to last, creating a fandom that was simultaneously critical of Cyrus’s sexuality and the “danger” it posed to their union.

During a break from their relationship in 2015, Cyrus publicly came out as queer and gender nonconforming, an announcement that fans of both stars scrutinized and disbelieved, especially when she released the song “She’s Not Him,” purportedly about model Stella Maxwell. Cyrus has said that her first romantic relationship was with a girl, and that she’s always considered her sexuality to be fluid. In a 2017 Billboard interview, Cyrus said, “I always get in trouble for…generalizing straight men, ’cause straight men can be my worst nightmare sometimes. And I’m with a straight dude,” suggesting that she’s well aware that both her relationship and her sexuality are constantly under scrutiny as a result of her fame and a continued cultural misunderstanding of queerness.

Last week’s announcement of Cyrus and Hemsworth’s split was greeted with both an outpouring of online feelings and a glut of hateful messages that blamed Cyrus’s sexuality. One Twitter user wrote that Cyrus is a prime example of why you shouldn’t trust bisexual people—although Cyrus has been explicit that she identifies as pansexual, not that that statement would be true, either. The user wrote, “#MileyCyrus splitting and allegedly cheating on Liam with a woman confirms that you shouldn’t date bi people. Not offensive, just true. Bi is greedy and never satisfied.” Cyrus’s fellow musician Halsey—who does identify as bisexual—had a pointed response for such generalizations: “Stop being afraid of women who aren’t afraid to do what pleases them and not other people.”

As news of the couple’s breakup churned through the news cycle, so did photos of Cyrus kissing another woman, Kaitlynn Carter. Straight people on social media were critical of their spending time together, saying that it seems wrong to go on a vacation and flaunt it in an ex’s face immediately after breaking up, and that Cyrus was being “slutty” and “inconsiderate.” On the other hand, queer women came out in droves to celebrate having Cyrus “back,” glad that she had left a man, and suggesting her relationship with Hemsworth had always been temporary—a youthful pit stop on the road to a more valid queerness.

Famous or not, Bi+ people don’t become less queer when we start dating someone of one gender versus another, so the idea that Cyrus had been “lost” from her community during her relationship with and marriage to Hemsworth is one I take issue with. Most Bi+ people don’t think of their identities as being split in half, so why are we asked to quantify our queerness? Identity policing has always been a cold reminder that even in a space that can be as open and loving as the LGBTQ+ community, there are rules here that can be as rigid as those in hetero spheres. You have to pick a side—and if you don’t, well, you’re just not like the rest of us.

As a queer person who has experienced my fair share of both internalized homophobia and erasure and biphobia from others, the bitter sting of having your sexuality invalidated and painted over in order to fit a mold that makes sense to others is all too familiar. When I dated cis men and wasn’t out, I wasn’t being true to myself. But when I came out, it didn’t necessarily feel better. Queer people told me I wasn’t truly queer if I kept dating cis men, or if I didn’t commit to only dating women—a strange thing, considering that bisexuality clearly implies an interest in multiple genders. When I finally did start dating people who weren’t cis men, I felt like there was a certain number of people I had to date, or kiss, or sleep with to be considered truly queer. None of that was true, of course. But the narrative that to be queer means to eradicate anything that even potentially looks like or mimics heterosexuality from your dating life was deeply rooted in me. It’s deeply rooted in many of us.

It doesn’t help that representations of queerness are stifled by a popular culture that, despite some promising changes, remains heteronormative. This limited representation is part of why Cyrus’s fans—whether they want her to be queer like they are, or they doubt her queerness entirely—are so invested in her sexuality. We don’t often see queer characters on TV or moments in pop culture that don’t assign a set identity or make a big deal of sexual fluidity. Callie Torres (Sara Ramirez) on Grey’s Anatomy and Rosa Diaz (Stephanie Beatriz) on Brooklyn Nine-Nine are two examples that come to mind: At the start of both shows, the characters were assumed to be straight, Callie and Rosa transitioned to dating people of different genders with a narrative casualness that was meant to normalize their bisexuality.

However, in shows like Glee, the queer representation offered by characters like Brittany (Heather Morris) and Santana (Naya Rivera) felt murkier in its intent. Though Brittany identified herself as attracted to both men and women—an ostensibly positive step forward for pop culture given the show’s audience and reach—she was also portrayed as comic relief and as an unintelligent, thoughtless character, which only pushed the idea that Bi+ people don’t know what they want, and hurt people because of it. Kristen Stewart, a celebrity who, like Cyrus, has been subject to the queer community’s ongoing scrutiny, dated fellow actor Michael Angarano until 2009, started seeing her Twilight costar Robert Pattinson until 2013, and began publicly dating women in 2015.

Straight people were mad that Stewart was no longer fulfilling their Bella-and-Edward fantasies, while queer women were ecstatic that someone so hot was playing for “our team.” Stewart has continued to have relationships with women in the last four years or so (she’s currently dating Cyrus’s ex, Stella Maxwell), and she’s said that she identifies most with bisexuality. “It’s cool that you don’t have to nail everything down anymore,” she told The Guardian in a 2017 interview. “That whole certainty about whether you’re straight or gay or whatever. You’re not confused if you’re bisexual. It’s not confusing at all. For me, it’s quite the opposite.” And her openness about her sexuality and being loudly and publicly queer has helped other queer people accept themselves more.

It’s crucial to examine how we respond to Bi+ celebrities—and to understand how we harm our community when we shame Bi+ people.

The lack of respect for Bi+ identities has impact. Often, to drive home my own preference for people who are not cis men, I lean on the word “gay” to describe myself, in hopes that no one will invalidate me. In doing so, however, I erase my fuller identity simply to be accepted by others. Comments lobbed at queer women like Cyrus have recently set me back on the path of questioning why queer women in particular are made to feel like our more complex identities are something to be left behind when we’re dating someone of one gender, or that we must conform to monosexuality to be true. That, as a community, we often treat queerness or dating as a team sport—saying we have Cyrus’s or Stewart’s “back”—is not only disingenuous, but deeply harmful.

Invalidation, erasure, and a general disrespect for Bi+ people has real consequences: When tabloids dug into Johnny Depp’s abuse of Amber Heard, for instance, they suggested that perhaps he was abusive because she was bisexual and he was afraid she would cheat. The suggestion that Heard’s mistreatment could be blamed on an identity that strayed from the “norm” made it clear that mainstream media wasn’t sure what to do with someone who resisted easy categorization. Research has repeatedly pointed out that people who identify as bisexual, or as being attracted to many genders, are more likely to struggle with mental health. Approximately 40 percent of bisexual people have considered or attempted suicide, compared to nearly a quarter of gay men and lesbians. Bisexual adults are even more likely to struggle when they are transgender, nonwhite, and/or disabled. Further, bisexuals are much less likely to disclose their sexuality to healthcare professionals, meaning that stigma is preventing us from access to the information, treatment, and care we may need.

As Janelle Monaé told Rolling Stone in 2018, “Being a queer Black woman in America, someone who has been in relationships with both men and women—I consider myself to be a free-ass motherfucker.” Monaé’s disinterest in one specific label calls out the simple fact that, at times, language simply can’t contain human complexity or accurately represent our identities. Labels for sexual and romantic orientation in the queer community should give us freedom from the strict binaries and rules imposed on us by cisheteronormative culture, not used to gatekeep queer people.

I decided to dig into the cultural response to Cyrus’s relationships not because I’m interested in defending her (Cyrus has made a number of questionable comments and decisions herself) but because it’s crucial to examine how we respond to Bi+ celebrities—and to understand how we harm our community when we shame Bi+ people. If we continue to perpetuate the stereotypes rearing their heads in the wake of Cyrus’s split with Hemsworth—to tell queer women that they’re only valid when they choose the “right” team, or that those who choose to explore their identities by dating people of any gender are less valid—we’ll perpetuate the idea that there is only one way to be queer. Studies continue to find that bisexual people make up more than half of the population of the LGBTQ community but less than half of those people report being out even to the people closest to them. With that in mind, we have to confront our own internalized homophobia and biphobia if we truly want to be free-ass motherfuckers.