Profiling 101The White Mediocrity of “Mindhunter”

by Olivia A. Cole

Netflix’s Mindhunter was made for people like me. If I weren’t so sure that pursuing forensic psychology would have resulted in a lonely, macabre life, it would have become my career. That’s why shows like Mindhunter tend to be my first choice in entertainment–during college movie nights and my best friend often said, “Ugh, don’t let Olivia pick the movie. She’s always got us watching some creepy-ass shit.”

Seven, directed by David Fincher, was one of those “creepy-ass” movies, so when I saw he had a hand in Mindhunter, I added it to my watchlist. I ended up hate-watching the whole first season in two days. Like so many films and shows, white dudes just can’t get out of their own white dude way. The main critique of the show is how slow it is. “No action! They just throw a bunch of facts and theories at you!” These are not my issues. I love the facts, and even if the theories discussed are old hat to anyone who has watched more than a single season of Law & Order: Special Victims Unit, I could have tolerated the heavy-handed script—which is often a clumsy way of navigating its own plot goals—had it been delivered by anyone but Holden Ford (Jonathan Groff).

Ford is a mediocre white cishet male hostage negotiator for the FBI, who we are introduced to during a hostage situation. While the hostage was not harmed, the perpetrator—who was suffering from mental illness—committed suicide. We learn, though, that Ford already exhibits some of the character traits that will lead him to criminal psychology; that is, exploring not just what killers do, but why they do it. Post-hostage scene, Ford’s mediocrity is increasingly apparent to everyone except, perhaps, the writer and director, who clearly envision him as a determined and dedicated individual hellbent on finding answers, but who the audience might peg as a white guy to whom white-guy things happen.

Opportunities for professional advancement fall in his lap and the “discoveries” he makes are coincidental and generally the result of the input of women far more intelligent than he is, including his grad student girlfriend Debbie Mitford (Hannah Gross) and his colleague Dr. Wendy Carr (Anna Torv), who, despite being the smartest non-criminal characters on the show, somehow remains on the fringe of an otherwise all-white, all-male story. 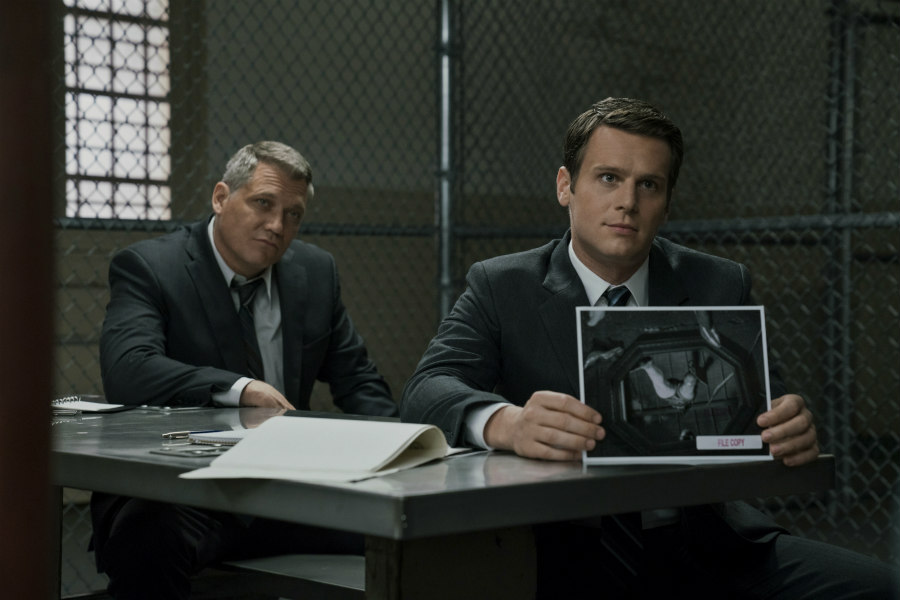 When Ford meets Mitford for the first time, she overwhelms him with citations of Durkheim and admits she makes him “work too hard.” Carr is also intellectually superior, with years of criminal psychology experience under her belt. Yet she does not attend a single one of the Behavioral Sciences Unit interviews conducted by Ford and his partner Bill Tench (Holt McCallany), although they spend most of the season blundering through cases and literally saying, “Wait, remember what Wendy said about [insert psychological theory or fact].” Carr gets a slice of a single episode when she reveals she’s a lesbian—accompanied by clumsy dialogue that reveals the writer has no idea how women talk to one another, let alone two women in love—and then we see no more of her personal conflicts except for her descent into cat-ladydom as she feeds a stray in her apartment’s basement (while inexplicably clad in a striped men’s Oxford shirt).

As for Mitford…well, you know it’s bad when you start developing theories that she’s a figment of Ford’s imagination since she doesn’t interact with anyone but him until halfway through the season. Predictably, Mindhunter falls back on time period to explain the dearth of both women and people of color. But what’s even more irritating is that the show considers these issues non-issues merely because they are (sort of) addressed with half-assed references to female empowerment that aren’t backed by actual opportunities for the show’s women. The same is true for the show’s treatment of Black Americans, with three striking references to Black folks that were as clumsy as they were offensive.

When Ford initially meets Mitford in a bar, they banter about him being an FBI agent. He gestures toward a group of young Black men minding their own business at the front of the establishment, and says, we assume as a joke, “I’m not here to infiltrate the Black Panthers.” Later, when he’s leading a group of young, white, male FBI rookies in a hostage negotiation role-playing exercise, he tells them to get in character. One of the rookies takes it upon himself to “talk jive,” explaining that he has chosen to “play a Negro” as the hostage-taker in his scenario. Ford doesn’t address this, of course, and neither does the show, as if addressing the issue of racist police practices is the same as merely displaying them on-screen. 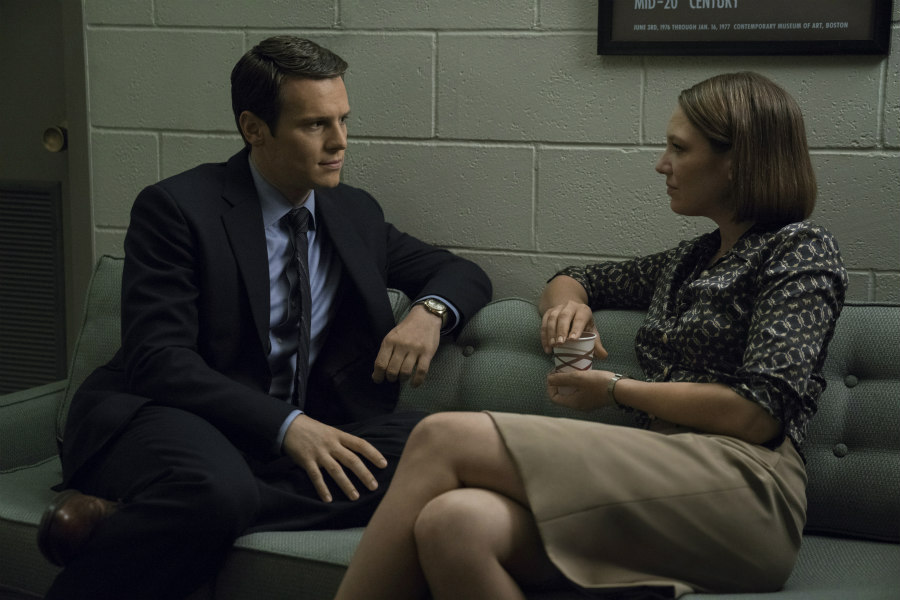 Finally, once the Behavioral Sciences Unit is up and running, we encounter a smart, personable Black applicant, who Tench recommends hiring. However, Carr has to coolly explain that they can’t hire a Black man because a large percentage of the subjects they interview are white racist men, the show’s only acknowledgement of the role white supremacy—and toxic masculinity—play in mass murder and violent crime. These passing encounters with identities outside the white male experience feel vulgar in their brevity. Again, Mindhunter’s creators seem to believe that a vague awareness of these issues is synonymous with addressing them, and while they’re wrong, that’s only part of the problem.

The problem extends into Mindhunter’s insistence on centering a white male character, which might indicate white male creators’ refusal to acknowledge the writing on the wall when it comes to the success of diverse writing—penned in neon in the form of box office numbers. But it also illustrates the impact of whiteness on creativity and the limitations it enforces. Choosing Ford—who, as a white male, has less to fear from the serial killers than any other person—as the character we orbit in Mindhunter is the path of least resistance, creatively speaking, and in that way, the laziness oozes from the script. Including a Black character means having to “deal with” the FBI’s antiblackness, or at the very least, means making serial killers’ racism more than a single line delivered in passing.

Centering Carr—or Debbie, or another woman—means having to “deal with” violent misogyny on more complicated grounds than, at best, secondhand horror and, at worst, secondhand fascination. With Ford, a white male writer might think they can just “focus on the story,” which, of course, says a lot about which identities are viewed as default, and further illustrates the mediocrity of centering white maleness without actually discussing white maleness. White male writers are often critiqued for their inability to realistically write women characters or characters of color, but I’m increasingly skeptical of their ability to write themselves. Creating a show around the FBI—knowing the violent role the FBI and COINTELPRO played in American history—while not addressing Ford’s complicity in a racist organization is lazy, and also reveals a blindspot bigger than the character’s mere mediocrity. 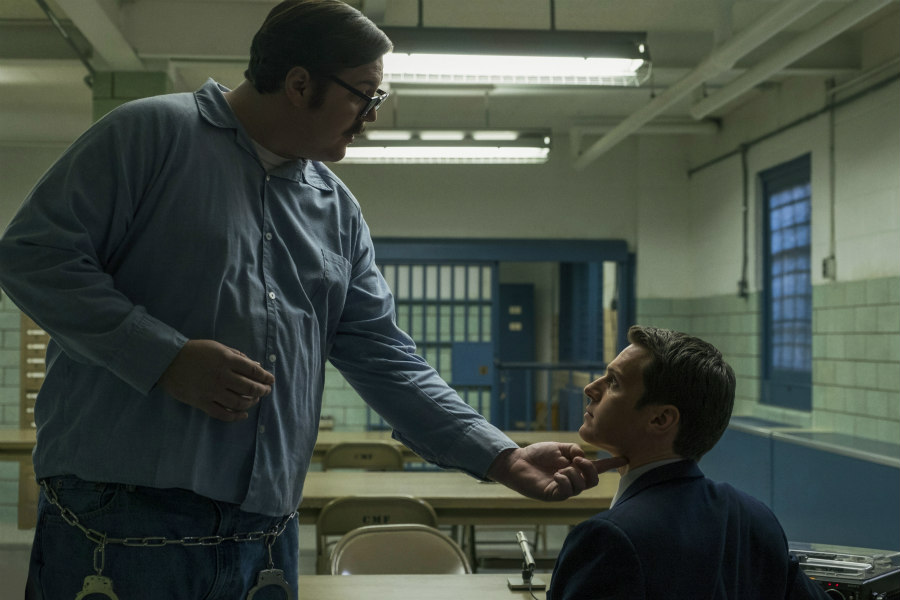 Too often, the implication is that a character like Ford has no “issues” simply because of his white maleness, but latent racism is an “issue,” and in Mindhunter, Ford’s racism is only barely glimpsed and then glossed over. It’s this distancing of Ford from “the problem”—by the end of the season Ford is at odds with the Bureau and on the verge of going rogue—that is often a mistake many white writers (and not just male ones) make: this tendency to identify The Problem and then situate the (white) character as on the opposite end of it, even when historically improbable.

A 1970s Ford—who in Mindhunter’s script is already given opportunities he hasn’t earned; has made racist jokes; and relies on his clever girlfriend’s sociology degree to make up for his professional shortcomings—is most likely not the person today’s audience would like to admit relating to. Yet Mindhunter insists on shoehorning him into the center of our scope, edging out more interesting characters for the sake of his white dudeness. It’s lazy, it’s mediocre, and it dooms the audience to suffering through a retelling of the same old story in which white women are either in the background or dead on a slab, men of color are scarce, and women of color are entirely invisible.

I can only assume that writer Joe Penhall created Ford with purposeful parallels to the serial killers he profiles—poor judgment; obsessive; possible mommy issues; problems with boundaries—but unless season two lines up more dominoes relating Holden’s white maleness to that of the killers he profiles to make a larger statement about the violent nature of white masculinity in America, there’s nothing new to see here, folks. You’ll spend the whole season waiting for someone more interesting than Holden Ford to join the Behavioral Sciences Unit, but white dudes are standing in the way. 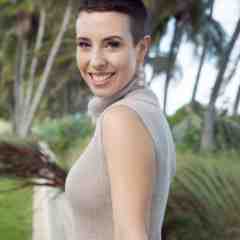 by Olivia A. Cole
View profile »

Olivia Cole is an author, blogger, and poet who lives in Louisville, KY. 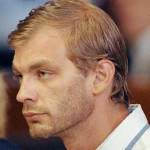