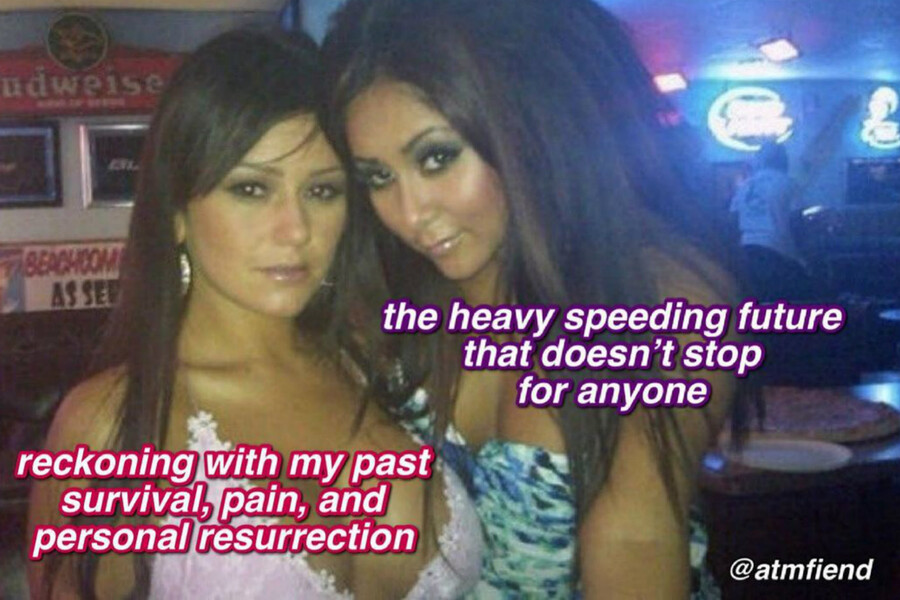 A woman wearing a champagne-colored bikini squats in a verdant forest and stares into the middle distance. “Howdy cowboy,” she appears to say, her words floating in a cloud of pink speech, “I’m sorry to say I am no longer teaching men how to be good people, so you carry on now!” The creator behind the image is writer and artist Erin Taylor, whose Instagram account @atmfiend began as a page for fetish and kink memes (“I was working in a sex dungeon at 22”) but quickly morphed into what she calls her “online trauma diary.” For Taylor, who has contributed to Bitch, no subject is off-limits to her online audience. “I don’t really treat any single thing I’ve been through as taboo,” she says, “even if I recognize certain experiences are a bit more taboo to discuss publicly, like experiences with childhood sexual abuse, family estrangement, or experiences in the sex trade.”

The posts explore traumatic events in Taylor’s life, depressive thought spirals, and more, often pairing intimately personal, unsparing monologues with paparazzi shots of celebrities from the early aughts. An oversaturated Britney Spears decries the anxiety that tends to come with executive decision-making. Danny DeVito walks his wiener dog beside a text about the enduring impact of abuse in one’s early life. The overall effect is one of maximum absurdity—which is, of course, the point. For a while now, it has seemed increasingly like the only things that make sense are things that make no sense at all. So it’s no wonder that the meme, an ostensible reflection of the world we live in, continues to become more esoteric and ever darker. Particularly in the grip of the current global health crisis—one that has flattened communication and confined most interaction to our screens—the meme has entered a new era as an emotional shorthand.

In Richard Seymour’s 2019 book The Twittering Machine, the metaphor of a “virtual tooth” is used as a comparison point to wallowing in one’s misery online as a way of directing pain away from a deeper sadness within. Seymour writes, “In the grip of a toothache, a common reflex is to make a fist so tight that the fingernails bite into the skin.” In creating a “virtual centre of excitation,” the pain is diverted. “If we are in pain, this suggests, self-harming can be a way of displacing it so that it appears lessened—even though the pain hasn’t really been reduced, and we still have a toothache,” Seymour writes. Following this logic, whether a depression meme is funny enough to facilitate a mood change, or simply poke the bruise, there’s an analgesic effect. Nik Slackman, a principal research scientist at the Bard Meme Lab, believes that this utility runs along generational lines. “A lot of people who used them as a coping mechanism as teens have come to identify memes as a fundamental component of their digital vernacular, so the number of people using this form is just growing naturally,” he tells Bitch. “The trend before the pandemic was already that everyone was progressively spending more time online, so it figures that this form of coping has only grown since then.”

A 2020 study poses that the connection online users feel with depressive memes and other forms of dark humor (take, for instance, the incredibly macabre #literallymylife tag on TikTok) is an example of a “cognitive reappraisal”—the way an individual is able to change their interpretation of an event or situation. The study’s author, Umair Akram, PhD, a professor of psychology at Sheffield Hallam University, explains that neurotypical subjects will often adjust or reframe their experiences by trying to concentrate on the positives of a given set of circumstances. “If someone’s had a bad day at the office, they would reappraise when they got home and focus on the good things that happened during the day,” Akram says. “We know that, with depression, emotion regulation strategies like cognitive reappraisal are affected.” According to Akram’s research, depressed individuals are more likely to compare their negative thoughts and feelings to “something which could have been worse.”

More directly, “People just want to feel seen,” says Taylor. “There are a lot of very isolating subjects that people never deal with in their lives. [There’s a surprisingly large] amount of people who have personally reached out to me to tell me, ‘hey this happened to me too, I’ve never told anyone’.” She continues, “I think in some ways we have come a long way with the mainstream of understanding, but people don’t want to talk about the kind of trauma that is life-altering and hard and impossible to understand because it’s all you know. I feel the page is my way of working through all the abusive paradigms I had normalized en route to building my own liberation, and I think that is what [speaks] to people.”

In subverting viewers’ expectations of typical meme humor—more traditional memes are often both light on text and in terms of their subject matter—depression memes find a lot of their power. “When you see a trauma meme that hits, it’s often because the creator has taken this ubiquitous medium, one in which the images featured tend to be sourced from the uncanniest corners of pop culture, and given it a hyper-specific text that only the creator could have produced,” Slackman says. “The effect is genuinely moving and meaningful, and—relating back to memes in general—it’s a trick that literally anyone online can participate in.” This final point goes some of the way toward explaining the explosive popularity of accounts like Mats Anderson’s @afffirmations. The 20-year-old artist launched his “radical gratitude Instagram” at the start of 2021, and has since accrued more than 200,000 followers. “I THRIVE AT THE OFFICE,” reads the first picture in a recent carousel of block text over stock images. “My contribution to society is cool pictures on Instagram,” says the next, followed by “I AM NOT ENTERING A DEEP AND SERIOUS PSYCHOSIS” and “I’M IN CONTROL.”

Anderson’s posts, while aggressively positive, rely on satirical humor in the same way many depression memes do. They read like talismanic denials against mental health issues, capitalism-derived misery, and other darker feelings, but they also undeniably function as a testament to the pervasiveness of these things in people’s lives. The popularity of Anderson’s memes has prompted him to launch an official merch store that sells posters and apparel featuring his images. But online expressions of individual mental health become more complicated when a commercial imperative is introduced; one could argue that memes, subject to commercially motivated social-media algorithms, are leveraged for profit and clout in the online creator economy as much as they are for earnest public catharsis. The personal-essay boom may be long over, but mining your own trauma for public consumption creates evergreen content in an exploitative system.

Writing for Real Life magazine about the perils of TikTok, Isabel Munson calls the platform “a space designed to create confirmation bias—or, more accurately, engagement bias.” She argues that mental health and self-help content marries naturally with the “direct and intimate format” of the app, but things take a turn for the problematic when posts are designed for virality. “There’s a fine line between destigmatizing and incentivizing, especially on social media platforms with built-in feedback mechanisms,” Munson writes. “Whereas a therapist might question the usefulness of identifying oneself as permanently aligned with whatever struggle one is experiencing, engagement-driven platforms help frame conditions as points of identity, badges of honor. If users find they are rewarded primarily for producing content on a certain condition, belief, or identity, it can skew their motivations and self-definition, making them believe at some level that it is the most interesting and likable thing about them.”

Considering the life-changing amounts of money creators are seeing as a result of content being minted as NFTs—the “most expensive meme in history,” for instance, recently sold for $69 million (nice)—there’s no question that the choice to administrate a popular and relatable presence online is increasingly entrenched in capital, something that is sure to mess with anyone’s mental-health journey at least a little. Mitch Anzuoni, head of research at the Bard Meme Lab, sees this as a broader problem still. “Any artistic form, whether a meme or a novel, can be used in the exploitation of trauma and suffering,” he says. But we need to trust that today’s meme-makers do have agency, and that they are not at the self-destructive mercy of the algorithm. “Such forms can also be a faithful conveyance of one’s experiences. It’s a question of honesty, of intentions cruel or otherwise,” Anzuoni says.

The real issue here “is the gamification and data mining of the content by big tech companies,” he continues. “It is clear that there is a need for spaces where people can talk about these sorts of issues, but currently these spaces are controlled for-profit enterprises, who chose accounts to anoint and posts to promote, which only encourages the competitive production of more content rather than any deeper dialoguing.” Of course, processing one’s trauma through making and sharing memes is likely just one coping mechanism of many. And while we can agree that Mark Zuckerberg has never truly had users’ best interests in mind, the communities that flourish on his platforms that are used by millions to share, cope, and connect are not a resource to be underestimated. Another reality is that Munson’s hypothetical therapist, who might push back on their client’s alignment with a particular disorder, costs around $150 an hour to speak to. That young people, whose distress can be easily dismissed as ‘teen angst’, are turning to social media for accessible solutions to their emotional problems is not all that surprising. As Munson says herself: “Understanding that ‘it’s not just me’ or ‘not my fault for being like this’ can be a tremendous relief.”

The tension between personal expression and commercial imperative is as sure a thing as the ever-recurrent popularity of auto-fiction, and judging creators’ pursuit of a self-sustaining, self-fulfilling income source helps nothing and no one. But neither will ignoring how closely individual mental health and financial stability are linked. That a meme can be simultaneously a piece of monetizable content and a therapeutic, connective image is a conflict, but it also just is, in the way many things are online. The brain can be poisoned by the internet in much the same way that can be nurtured, and the isolation and fear that’s characterized our collective pandemic experience has only worsened an often toxic dependency. Ultimately, all we’re looking for online are signs that the good in the world is outweighing the evil, and if photoshops of Danny DeVito are clearing a path forward for anyone, I’m definitely here for them.

Read this Next: When Politicians Go Viral, Is it Critique—or PR? 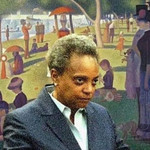 by Vanessa Taylor
Memes stand apart in a range of political coverage that includes everything from established news reporting to satirical forums.