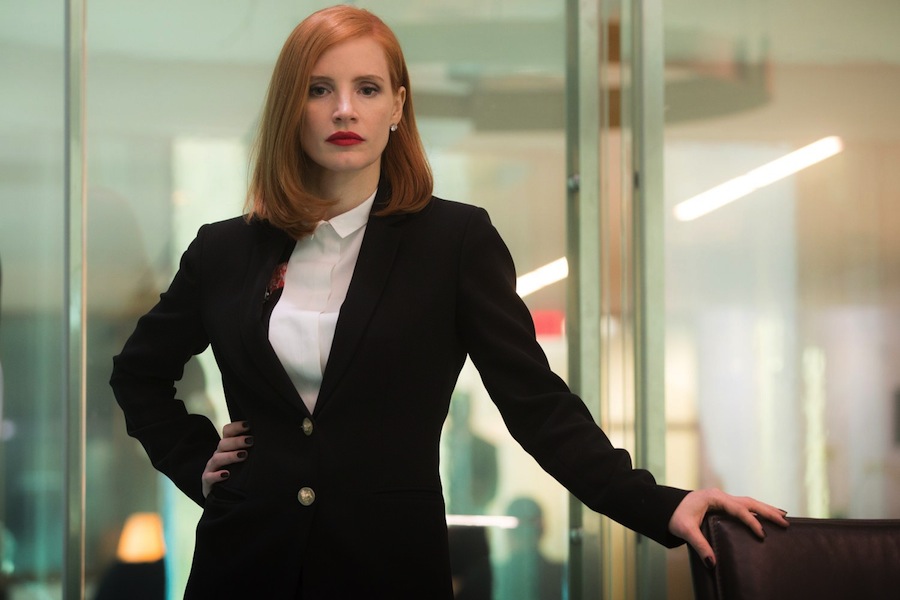 After lip-reading what’s supposed to be a closed-door conversation in a nearby office, lobbyist Liz Sloane (Jessica Chastain) scoffs, “Glass walls? Seriously?” Floor-to-ceiling windows dominate the political drama Miss Sloane from conference rooms to airport terminals, and the scenery suggests the hypocrisy—fragile, structural—on which Washington is built. Viewers expect someone to throw a stone.

Instead, what we get is Sorkin lite. The characters are walking explainers, speaking in rhetorical questions—“You know the root of the word ‘annihilate’?”—and the odd zinger. Leading them is Liz, who left a tony firm to spearhead an underdog campaign for gun control legislation. Chastain’s in her American heroine mode a la Zero Dark Thirty and The Martian here; she’s stressed and steely. But those were more recessive roles in movies more driven by missions than personalities. Here, Liz must always have the last word, and Chastain constantly seems like she’s going to run out of breath before she reaches the end of her line. She’s not believable as a brawler.

To be fair, the script doesn’t give her much room to maneuver. Liz is an arrogant, ruthless maverick, all pill-popping and power suits. It’s apparently a big deal that she hires male escorts and doesn’t wash her hands after using the bathroom. In one scene, a potential ally spits at her, “The only thing you’re missing is a dick,” which sums up this movie’s retro concepts of gender subversion. 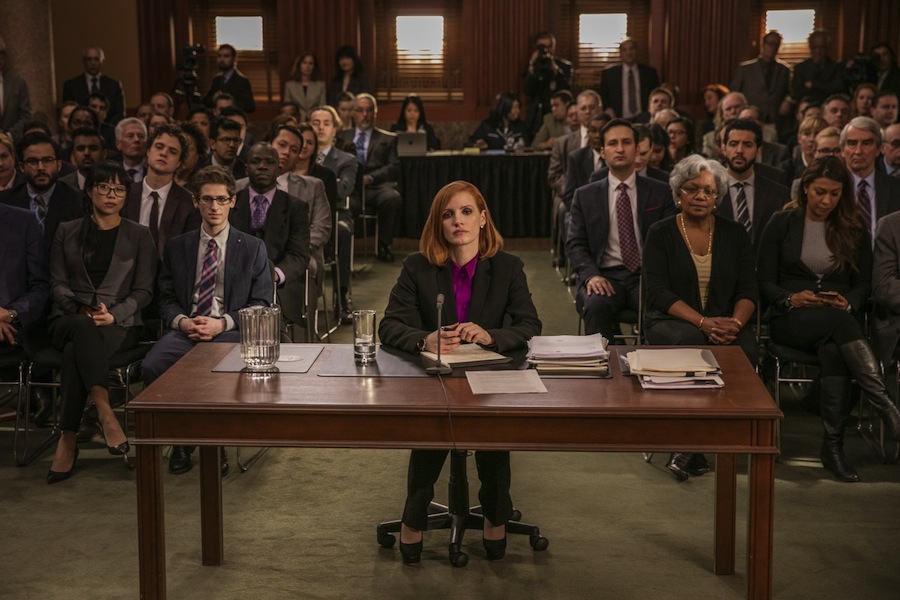 Sloppy paperwork and dirty laundry land Liz in a Senate hearing, which gives her a chance to make a big speech: “The system rewards rats.” Miss Sloane is not shy about its thesis, which is that the furtive transactions made by sex workers and lobbyists have more integrity than Congressional dealings. But the filmmakers haven’t done the reading, in policy or psychology, to make that pay off. The proposed background check would have little effect on gun violence, and the film has flawed ideas of how people arrive at their convictions. The presence of actors like Christine Baranski and Sam Waterston reminds viewers that these days, the best portraits of systems—workplaces, cities, governments—are on TV.

Pity screenwriter Jonathan Perera, who couldn’t have anticipated how viewers in December 2016 would flinch every time his heroine said “trump card.” Still, this movie’s total incomprehension of politics is hard to stomach post-election, when so many crave clarity, if not through hard-nosed insight into lawmaking, then at least through a parable we can believe in. All we learn from Miss Sloane is what we already knew: D.C. is debased, but Hollywood is obtuse, and this country needs a better class of political fantasy.