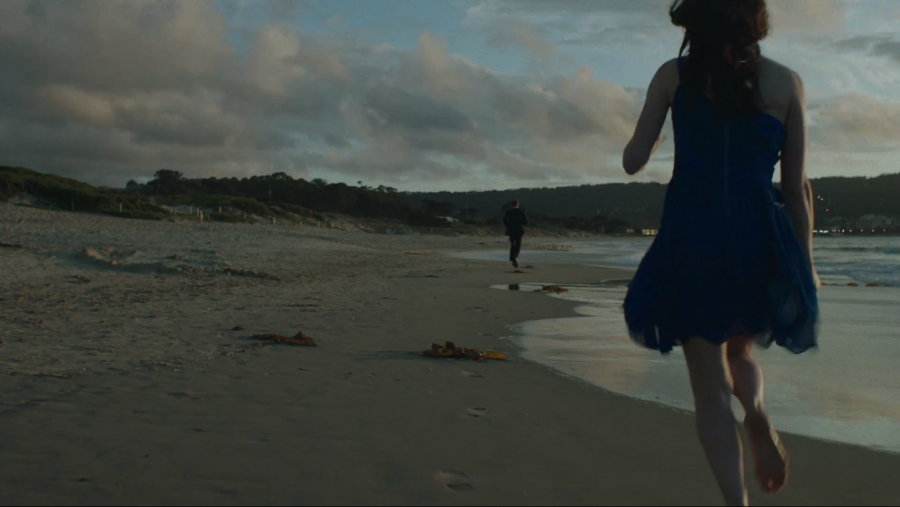 Big Little Lies, based on the same-titled novel by Liane Moriarty, follows the lives of the parents of a Monterey first-grade class and reveals the lies behind their seemingly picture-perfect lives. In the finale, we learn who has been bullying little Amabella, who is killed at Otter Bay Elementary’s Audrey & Elvis Trivia Night, and who is the killer.

Dahlia Grossman-Heinze, Soraya Membreno, and Andi Zeisler have been watching all season and gathered for a postmortem on our new favorite limited series.

Spoilers below for the finale of Big Little Lies. 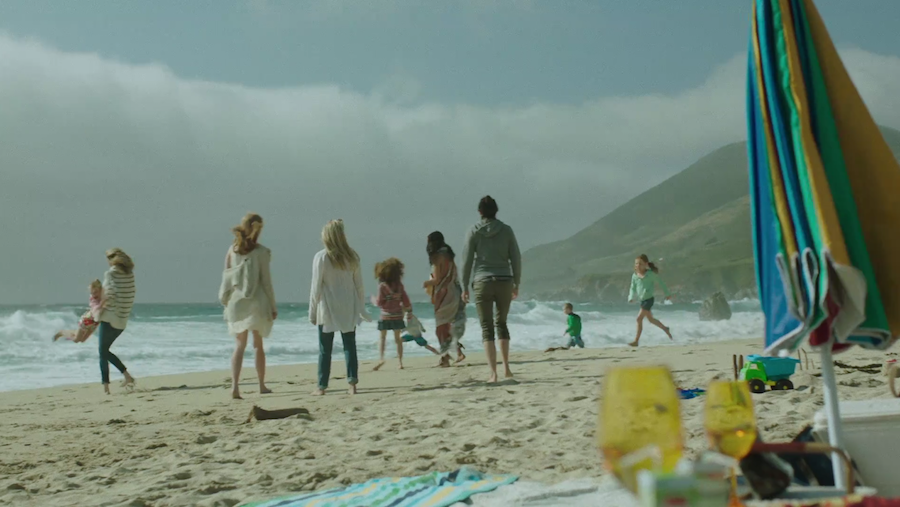 Dahlia Grossman-Heinze: Big Little Lies really changed the editing game for me. So many scenes were enhanced by creative and stylish editing that withheld information from the viewer until the moment when it would be the biggest surprise gut-punch. In the finale, the slow unveiling of both Perry’s violence against Celeste and the murder sequence were spellbinding.

Soraya Membreno: The murder sequence was beautiful. Is it weird to call a murder scene beautiful? But it was! The way they muted the sound and used the shots of the ocean to replace what would have been the most gory bits completely shifted the focus of the scene. It wasn’t about the murder anymore, for me. It was about the women. It was amazing but so, so heartbreaking to see how instantly they all understood the pieces falling into place–that violence is so much a part of any woman’s experience that it became their common ground.

Andi Zeisler: The ending made me feel weirdly complicit. It just had not crossed my mind that the murder scene could be a group effort, like I’d been conditioned to imagine these women ultimately acting individually. That’s a failure of imagination that feels anchored to not only typical murder-mystery plots, but to stories about competitive women. The show’s focus had been so finely tuned to their comparisons to and competition with each other, so the end was much more of a surprise.

DGH: I’ve watched the murder scene several times since the finale aired and every time it is heartbreaking and great. Alexander Skarsgård described the scene as watching a pack of dogs set on a bear. I like thinking of it that way; the women fought him off collectively and then circled the wagons to keep their crime secret. I know it was a little cheesy, but I liked watching all the women at the beach with their children, happy and unperturbed by their murderous secret. The sisterhood of justifiable homicide.

SM: That was a little cheesy for me, but they were also still being watched by the investigator at that point, so… less cheesy? Also I imagine they are their only friends now since the whole town is still gossiping about who the murderer was.

SM: This is more of a “hated it but I also loved it”—back to your point about editing, Dahlia. The entire episode was so anxiety-inducing. When Perry hands Celeste her phone and relays the message from her property manager I wanted to scream. But also had some trouble believing that the nanny would be so oblivious to Celeste’s clear fear. Or like, the past entire year. I dunno.

DGH: Perry so-casually mentioning Celeste’s property manager was so scary. I was screaming “Don’t go to the party!” and “Get out of the car!” at Celeste.

AZ: I had to suspend my disbelief that Celeste wouldn’t have had better protection on her phone.

DGH: I knew one of those Children of the Corn twins was the bully! In the finale, we learn that Max, one of Celeste’s sons, is the class bully, and that he’s been hurting other girls at school and knows that his father abuses his mother.

AZ: You were so right. I was super wrong.

SM: I kept thinking about both of your predictions as I was watching, I was trying to fixate on Chloe to see if she was up to anything, but she was cool.

AZ: Maybe I was secretly hoping that Chloe wasn’t perfect. Kid’s smart and confident and sassy and has impeccable taste in music? Damn, Chloe, leave something for the other kids.

AZ: After our speculation about Ed’s Whole Deal and the big-beard theory, it seemed notable that he shaved the beard for his Trivia Night performance. I mean, obviously he shaved it to better resemble Elvis Presley, but it felt like an acknowledgment that the creepy persona we’d been low-key teased with was a bit of intentional misdirection.

Also, Trivia Night seemed to be trying to do a little bit too much. Audrey Hepburn and Elvis Presley costumes, AND singing performances, AND tiki torches, AND trivia? Dial it back, Otter Bay Elementary.

SM: Plus an updated website with waving otters? And it’s a public school! Pssh.

DGH: That party seemed amazing. I want to go to there. Ed must have realized that Madeleine slept with Joseph, right? It was super obvious all night long.

SM: He definitely seems to have figured it out before going onstage, hence his liquid courage before what could have been a painfully awkward love song to his cheating wife. But I did wonder whether Madeleine ever actually confessed. I imagine the whole ‘we killed someone’ thing might have pushed that convo to the back burner.

AZ: I did think it was a little contrived that Madeleine would rush away from the party crying. It was obviously necessary to get her to the back terrace, but it definitely seemed at odds with her general efforts to retain a glossy, impenetrable facade. Maybe Ed’s beard was the problem all along.

Murder By the Sea 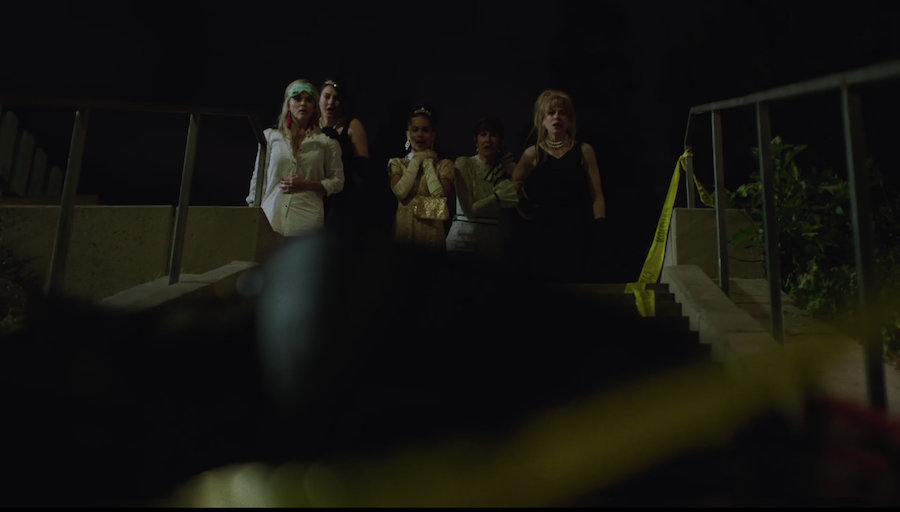 DGH: I am so proud I correctly solved three out of four of the Big Little Lies mysteries! Perry was indeed Ziggy’s father as well as the very-deserving murder victim. I was wrong about who killed him, but I really enjoyed how the show played with our expectations. I cited Chekhov’s gun theory in our last roundtable as evidence that it would be Jane who kills Perry; and the finale dangled that gun-red-herring all the way to the end when we see Jane fantasizing about shooting Perry. But the caution tape over the edge of the stairs was the real murder clue—and we’d seen shots of it since the very first episode.

AZ: There’s definitely something to be said about the fact that the one BLLer of color was the actual murderer. A story being colorblind doesn’t make it neutral.

SM: Definitely, though I do wonder how intentional that was. I think we all certainly read it as of course the one woman of color is the person who takes action and saves the day. And I do think it was powerful to watch them all unquestioningly protect her. But (and perhaps I’m just being cynical here) I’m not sure the racial dynamic was necessarily planned. Rather, Bonnie is just the one with the least backstory and therefore the biggest out-of-left-field surprise? Jane, on the other hand, assaults Renata, walks around with a gun in her purse, gets pulled over with a gun and weed in her car, all without any consequence.

AZ: Apparently the book does a more complete job explaining why Bonnie reacted with such fury. (Spoiler: Guess whose dad was also abusive to her mother?) I know a second season does not appear to be in the cards, but I am now fully invested in these women and would 100 percent read fanfiction about the next phase of their lives.