Monuments and MonstrositiesConfronting the Racism Behind Reproductive Research 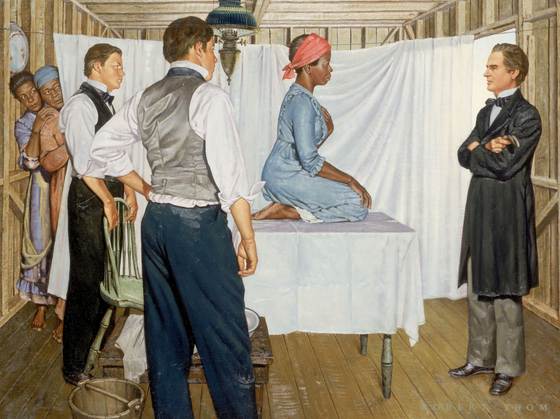 On August 12, white supremacists rallied in Charlottesville, Virginia in response to the proposed removal of a statue of Robert E. Lee. Since then, counterprotestors across the nation have called for the removal of other statues of confederate leaders: Activists in Durham, North Carolina took matters into their own hands, pulling down the Confederate Soldiers Monument with a rope. Seven protesters were arrested in connection to the DIY removal, but the urgency sparked by the Charlottesville demonstration—and the murder of Heather Heyer—has city officials in places like New Orleans, Gainesville, Brooklyn, Baltimore, and Austin planning to remove their confederate statues. (Charlottesville’s Lee statue, however, has yet to be removed.)
These statues are monuments to America’s white supremacist legacy, but it’s not only confederate leaders whose racist legacies are preserved in stone. On August 19, Black Youth Project 100 organized a demonstration outside the New York Academy of Medicine, where a statue of J. Marion Sims stands as a symbol of the history of racism in reproductive health.  As BYP 100 wrote in a Facebook post in advance of the event, Sims “was a gynecologist in the 1800s who purchased Black women slaves and used them as guinea pigs for his untested experiments in repairing fistulae caused by childbirth. He repeatedly performed genital surgery on Black women, without anesthesia, because, according to him, ‘Black women don’t feel pain.’” Only three of the enslaved women used by Sims have ever been named, and though their names—Anarcha, Lucy, and Betsey—are often given the honorific “The Mothers of Gynecology,” their painful sacrifices have merited no memorialization.

White women gained access to birth control only after the mutilation and experimentation on Black women, and yet it is Black women and their communities who remain one of the most underserved and ignored populations to receive thorough and affordable reproductive care. For the Sims monument to stand in East Harlem, whose population is majority people of color, is to ignore the violence and discrimination behind what we now consider modern gynecology and contraception.

Experimentation on women of color to advance reproductive procedures and medicine, as well as coercion into irreversible sterilization, is a common thread in reproductive history. In 1973, two young girls, Minnie Lee and Mary Alice Relf, ages 12 and 14, were picked up from their Alabama home and taken to a clinic where they were expected to receive a shot of Depo-Provera—a contraceptive still in its early experimental stages, which months earlier had been defunded as a contraceptive option because of the carcinogenic effect it had on lab animals. The girls’ mother, who was unable to read and write at the time, was lied to about what documents she was signing, and told that  Depo-Provera was the best option to ensure a future for her daughters.In reality, the state’s government was trying to control a Black population that they believed was likely to remain in poverty. Rather than implement legislation to protect and advance the livelihoods of young Black families in Alabama, the state instead decided to sterilize its young Black women.

Forced sterilization has also targeted Puerto Rican women and other Latina women, as well as Native American women. In the 2016 PBS documentary No Mas Bebes, the forced sterilization of Latina women at Los Angeles County General Hospital in the 1960s and ’70s finally came to light. Women who walked into the hospital seeking their best contraceptive option were often coerced into getting their “tubes tied”—a friendlier term for sterilization—because doctors assured them the procedure could be easily reversed. (At the time, it was not.) But more often than not, women were sterilized without their consent in an effort to control the Latino population in California. The effects of forced sterilization not only impacted the women’s physical health, but their emotional and social health as well. For one of the plaintiffs in a court case against one of L.A. County’s hospitals, Maria Figueroa, her inability to have children left her heartbroken and even suicidal.

In 1972, two 15-year-old Native girls entered a local Montana hospital to undergo appendectomies but also underwent forced tubal litigations, without their own or their parent’s consent. In a three-year span, more than 3,400 sterilizations were performed on Native women, 3,000 of those on women under the age of 44. In not a single case were the girls and women given consent forms that informed them of the irreversible effects of the procedure; neither were they briefed on federal guidelines and requirements needed on such documentation. Forced sterilization is especially harmful for Native American communities, since children are imperative to tribal survival. The longstanding efforts of white America to control and diminish the Native American population is one of its most violent, yet hidden, atrocities—a continuation of the colonizer’s implementation of Native genocide.

There are three monuments of J. Marion Sims standing across the United States. In three different cities, America honors the violence and manipulation done to Black women and other women of color in the name of modern gynecology. The statues must come down in order for America to acknowledge the violence done to the women whose bodies made Sims’s medical breakthroughs possible. We should remember Anarcha, Lucy, and Betsey.

Relevant: No Kidding: Putting Voluntary Sterilization in a Historical Context 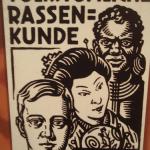 If we're going to talk about voluntary sterilization—or even the simple act of opting to have few or no children—we've got to...