More Than Our Machines | Bitch Media

More Than Our MachinesAesthetics and Prosthetics in Sci-Fi Film 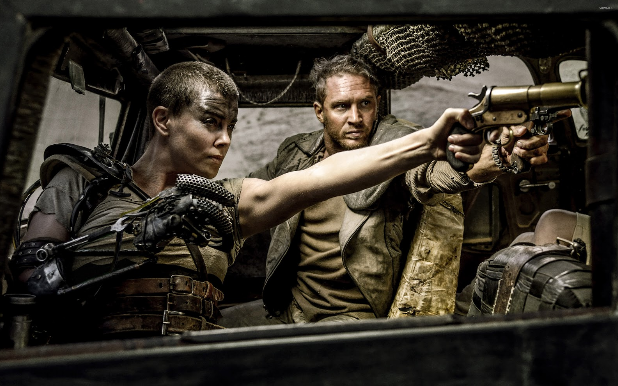 Science fiction has long been considered an effective barometer for measuring the prevailing attitudes and ideas in a culture at large. What better way to assess the contemporary moment than to see what that moment dreams up for its future fantasies?

It follows, then, that Star Wars is one of the most influential film franchises of our time. Bursting onto the scene in the late ’70s with A New Hope, the popularity of the universe seems to have never waned (despite six years of prequel films from 1999 to 2005, each more mediocre than the last). So far, Star Wars has spawned seven theatrical-release films, six television series, 29 novels, more than 140 video games, and a fan base so avid that even the most casual fan is knowledgeable about the distinction between Star Wars canon and its “extended universe.”

Disney’s acquisition of the franchise has been met with both critical and popular acclaim, delivering the sprawling universe and beloved characters of the original trilogy while developing new plotlines and protagonists. Perhaps the most exciting shift in the most recent films has been their emphasis on female leads, including young Jedi Rey of the sequel trilogy that kicked off with 2015’s The Force Awakens and Jyn Erso of 2016’s auxiliary film Rogue One. But I’d suggest that there’s something technologically interesting going on in Star Wars that can be tracked through much of today’s sci-fi and fantasy films: the representation of disability.

In the final scene of The Force Awakens, Rey finally meets the legendary Luke Skywalker on a lush and isolated rocky outcrop. When he turns to face her and pulls back his hood, Skywalker reveals his skeletal robotic right hand. 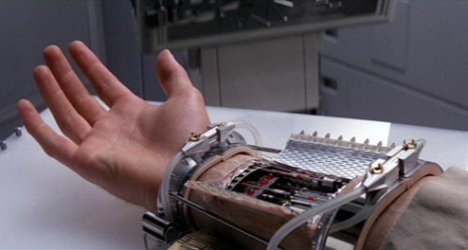 Fans will remember that Luke lost his right hand to his father, Darth Vader, in a lightsaber duel in 1980’s The Empire Strikes Back. Traumatic though the injury was, the emotional agony of Vader’s paternal reveal was portrayed as more wrenching than the loss of Luke’s hand—this is the future (or rather, the incomprehensibly distant past), after all. Later, the film was quick to cut to Luke’s arm on an operating table with a fully functional right hand attached, a panel flipped open on the inner arm to reveal circuits and servos. Luke’s hand makes faint mechanical noises as he flexes his new fingers. After the panel is closed, the audience never again sees Luke’s robotics, and can be forgiven for forgetting that he’s an amputee at all. 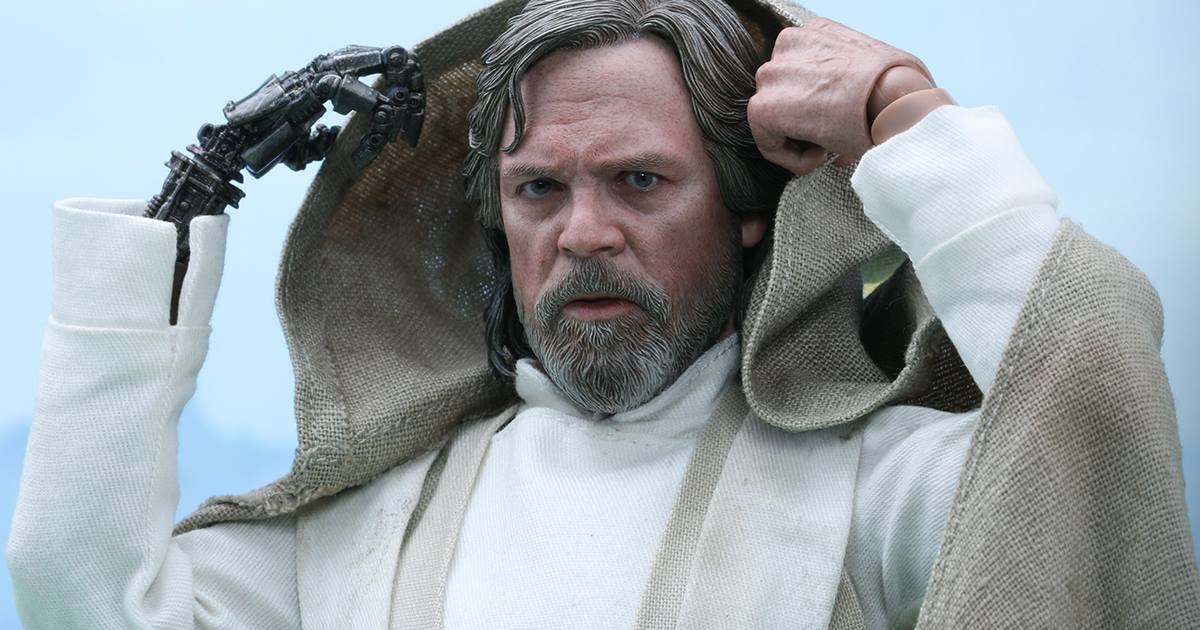 So the scene in The Force Awakens is not at all surprising—we all know that Luke lost his hand, and that it was replaced by a robotic prosthesis. What’s interesting now is that the robotics have been revealed: What was once covered up, either by an arguably over-styled black glove or simply by the seamlessness of the technology, is now visceral, visible, and important.

This is not the only example of a shift from invisible, fully integrated body mods to noticeable body-tech interventions in Star Wars. Even the monstrous representations of fragmented bodies have shifted—Darth Vader was the cyborg par excellence in the original trilogy, but his whole body was sheathed in black, and his heavily synthed voice was the only indication of his difference. It wasn’t until 2005 with Episode III: Revenge of the Sith that we saw Vader become a quadruple amputee, and again in his cameo appearance in Rogue One. Rogue One’s Saw Gerrera also has a similarly tech-assisted body, but rather than shroud his impairments in mystery, his are a visible part of the costuming—the prosthetic leg, the cane, and the breathing apparatus that’s not unlike Vader’s. 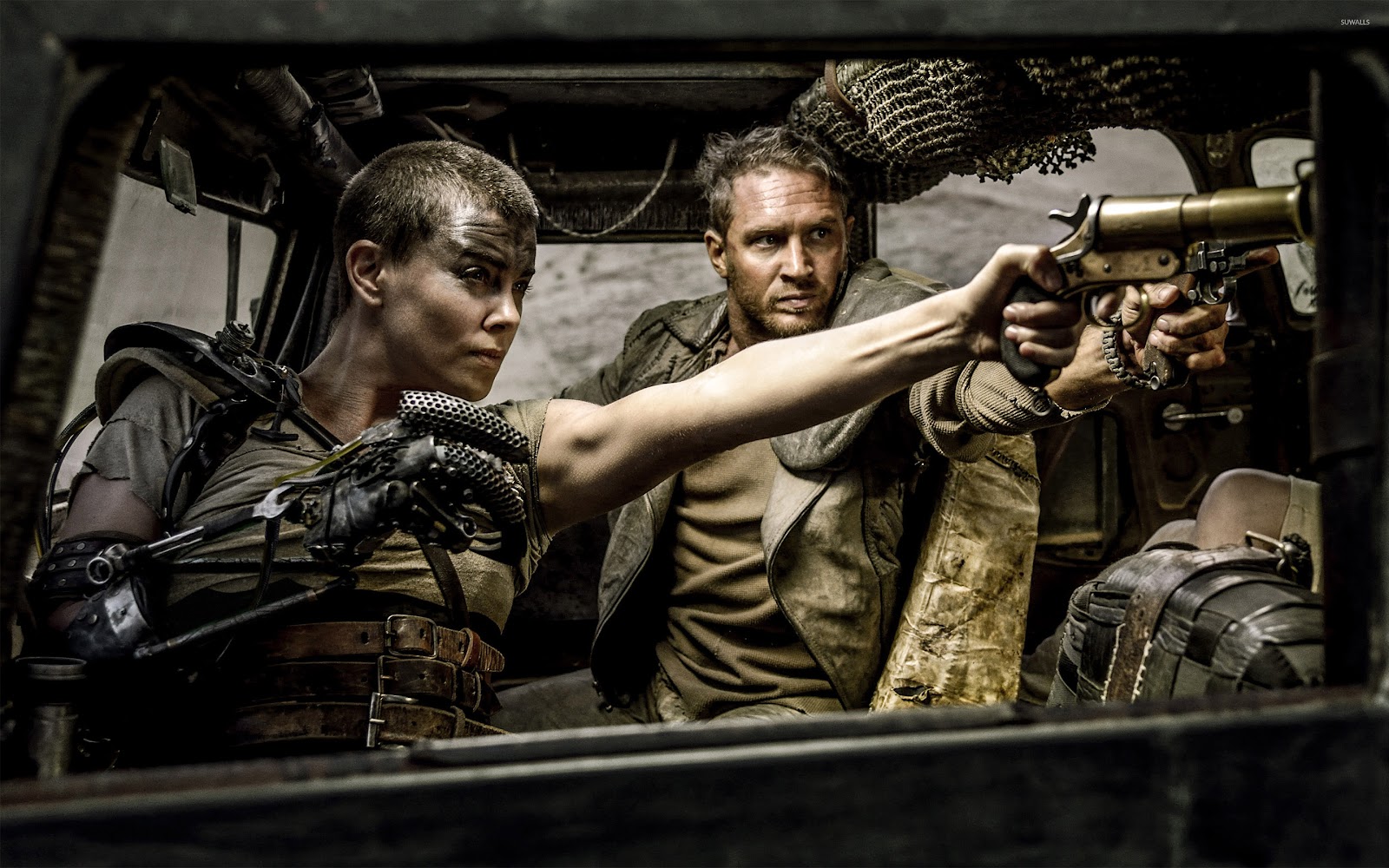 The most interesting thing about these films is that the fact that these characters have undergone an amputation is not hidden, is integral to the character’s development, and yet is never represented as disability—the technology takes care of that. Technological substitution, rather than being some mystical and therefore unrepresentable process, is depicted as both possible and even unexceptional: In the future, you can lose all your limbs and remain enfranchised. This possibility of empowerment, at least for films like Star Wars, is predicated upon the belief in effective substitution. Who cares if you lose the arm you were born with if you can replace it with a robotic one that’s just as good?

What this means is that our fantasies for technological possibility are being played out across depictions of impairment. The disabled body has become a cinematic trope for exploring the possibilities—and limitations—of technology. While this has fascinating implications for how the cultural zeitgeist is coming to depict our most intimate technological engagements, the fact remains that very few examples of these prosthetic relationships are done responsibly. The portrayal of Saw in Rogue One and the depictions of Anakin’s transformation into Darth Vader, for instance, have both come under fire by disability scholars and activists for using disability as metaphors for emotional and psychological disfigurement.

Despite increased depictions of disabled bodies in contemporary science-fiction films, there has not been much of an increase in depictions of disability. The body is simply used as a silent backdrop in service to the trope—it is technological, or even technophilic, fantasy that is being explored rather than the spectrum of human ability. (Furiosa in Mad Max: Fury Road is a notable exception whose characterization has been broadly considered an epic win by many in the disability community, despite the fact that Charlize Theron is of course not disabled herself.) Disabilities scholars like Marquard Smith and Vivian Sobchack have long documented usages of disabled bodies as props in modern culture, but it is especially interesting to see how this trope has become enmeshed with our anxieties about technology. While it’s superficially thrilling to see disabled characters kicking ass right alongside everyone else, their impairments are not really about them. Many of these depictions focus prosthetic rather than on the character’s experience. They are only as able as the technology makes them.

But if there’s anything that science fiction has taught us, it is that the future is undecided.

Perhaps this uptick in filmic representation of nonnormative bodies, however shallow or tropological, can be cause for some optimism. Building cultural familiarity with prosthetic limbs can be enormously beneficial for amputees, especially young children. And we’ve come a long way from Planet Terror’s Cherry Darling to Fury Road’s Furiosa. But we must not let our fascinations with technology dictate what is possible to imagine. It is important that we extricate depictions of disability from technological substitution, lest that be the only lens through which human ability is understood. We are more than our machines. 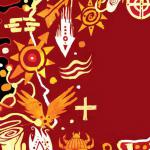 Before she was a poet, journalist, documentary filmmaker, anti-prison activist, and college instructor, Walidah...