“Moxie” Isn’t Perfect, but Neither Are New Feminists 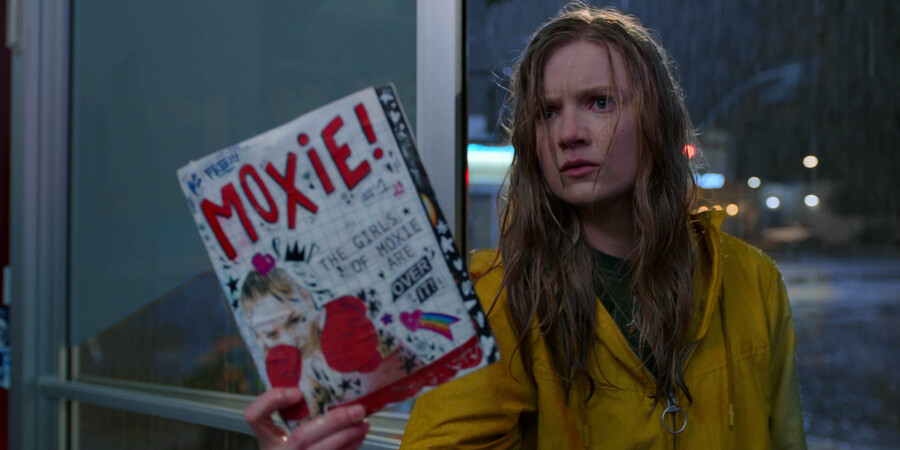 Moxie—based on Jennifer Mathieu’s 2017 novel—is Netflix’s latest girl-power tale. While the film offers an inspirational look into young feminist activism, it is largely buoyed by the characters of color who push Vivian (Hadley Robinson), our protagonist, to go further in her understanding of feminism. Vivian is frustrating as our lead, and it would almost be impossible for her not to be: She’s a sheltered 16-year-old white girl growing up in Texas, who has learned everything she knows about feminism from her mom’s (played by Amy Poehler, who also directs the film) riot grrrl zines. Vivian begins the film as the sort of naive white girl who looks at the bad behavior of her school’s shitty jocks and thinks the best advice she can give new student Lucy (Alycia Pascual-Pena), who is being targeted by football-team captain Mitchell (Patrick Schwarzenegger), is to ignore him. Despite her mother’s feminism—“All I cared about when I was 16 was smashing the patriarchy and burning it all down,” her mom tells her over dinner—Vivian has never really engaged with feminist issues. But she’s shaken when she finds herself facing down racism and misogyny in her own high school, and she stumbles time and time again as she learns how to fight back.

It’s Vivian who has the power to save Lucy, or so she thinks. When Lucy challenges their white-guy English teacher on their assignment to read The Great Gatsby—“I think the real question is, why are we still reading this book?” she asks. “It’s written by some rich white guy about some rich white guy”—Mitchell cuts her off and speaks over her to defend the book, and Vivian is immediately drawn to Lucy’s confidence. Later Vivian watches from across the cafeteria as Mitchell harasses Lucy while she tries to buy a soda: He stands way too close to her, his face over hers, steals her drink, and spits into the can. “Welcome to Rockport,” he says. Spurred on by these early moments, Lucy attempts to push back against violence at school by creating a movement that galvanizes the other students and encourages them to challenge the sexist, racist norms of their high school. Vivian creates Moxie, an anonymous feminist zine, which she distributes secretly at school, and it encourages her female classmates, especially young women of color, disabled girls, and trans folks. They become a crew, curling up on couches at parties to brainstorm and banding together at football games to try to push the beloved Mitchell from his undeserved pedestal.

Vivian’s first attempt to support Lucy is a lesson in white feminism. Despite knowing next to nothing about who Lucy is or what feminism is, Vivian believes she has the power to protect her. She approaches Lucy and says, “I just wanted to say, ignore Mitchell.” Vivian says, “Why should I have to ignore him? Why can’t he just not be a dick?” Lucy smiles ignorantly and says, “I don’t think he’s dangerous. I just think he’s annoying,” and tells her to “keep [her] head down.” Vivian smiles right back, saying she has no plans to do anything but keep her head high. Although the young women become good friends, the contrast between the two couldn’t be starker. Vivian might have been able to escape most of the harassment faced by girls at her school per her whiteness, but Lucy is inherently a target given her race. Vivian being outspoken is one thing, but Lucy being outspoken is another. It’s a lesson that Vivian learns slowly over the course of the film as more and more of her WOC friends push her to realize she doesn’t know everything there is to know about power and privilege just because she read a few old zines.

As a whole, Vivian, our white savior, is an empty vessel. It’s because of her mother that the 16-year-old has access to the language of feminism, and, as such, she steps into the older, whiter version of feminism that her mother introduces her to despite her mother reminding her that, looking back, her feminism wasn’t as intersectional or inclusive as it should have been. Despite this warning, Vivian steps into feminism as if it’s an outfit, leafs through her mom’s old zines, plays “Rebel Girl” by Bikini Kill on a loop, and then literally puts on feminism in the form of her mom’s old leather jacket, which, of course, is laden with feminist pins. Like Lucy, Vivian’s Asian American best friend, Claudia (Lauren Tsai)—an eventual part of the Moxie crew—offers a different take on feminism. Vivian feels like Claudia just doesn’t care about the cause, but Vivian’s feminism is leather jackets and pins and social media campaigns and anonymous zines. Claudia sees things differently, and the film peaks when the two get into a massive argument when Claudia doesn’t participate in Vivian’s school dress-code protest: Vivian wants all of the girls to wear tank tops to stand alongside a (white) girl with a large chest who is constantly being punished: She gets the idea for a protest from her mom, but when Claudia attempts to leave the house in a tank top, her mother panics and shouts at her, and Claudia arrives at school in a hoodie. Vivian thinks Claudia is betraying the cause.

Moxie is less sharp than Easy A (2010) and it isn’t as funny or relevant as Booksmart (2019), but it’s a worthy watch for younger viewers who are just approaching concepts such as feminism, activism, and power.

She has no interest in Claudia’s explanation for why she didn’t end up participating. Later Claudia takes the fall for Moxie and gets suspended. Finally, she explains to Vivian that they live in radically different worlds despite both being teenage girls. “You made me feel bad because I wasn’t doing enough. And you don’t get it, Viv. You don’t get what’s going on with me because you’re white,” Claudia says. ”Do you know what my mom had to sacrifice to get to this country? What she had to do so that I could go to college?” Vivian looks baffled. “I don’t have the freedom to take the risks that you do,” Claudia says. While Moxie could dig deeper in its racial analysis, there are moments that shine. While these teens are heavily sanitized—their language veers back and forth from after-school special to TikTok verbiage—they’re messy in a way that works. They’re haughty and selfish, and they desperately want to make a change, even if they don’t have all of the answers yet. At times you can see the way the characters themselves act like the heroes in their own stories, and the scenes play with this idea by having them reminded that, no, actually, they aren’t. In one of my favorite moments, Vivian storms into a store, her hair drenched and her raincoat glistening with rain, and holds up her first zine as if it’s the best thing that has ever been created in the history of the world. The girls of the world need saving, and she’s the one who’ll save them. “I need a shitload of copies,” Vivian says. The man behind the counter responds with minimal interest: “How many is that?” “Uh, 50,” she says.

Moxie is less sharp than Easy A (2010) and it isn’t as funny or relevant as Booksmart (2019), but it’s a worthy watch for younger viewers who are just approaching concepts such as feminism, activism, and power. The diversity of the cast was welcome, and the young women shine best when there are no men in the room, which isn’t surprising considering how they’re able to let their guard down when they don’t have to worry about being grabbed or harassed. In a room at a party, the group comes together for the first time—“Guys, we just had the official first Moxie meeting!”—and starts talking about “what’s messed up,” from sexist dress codes to transphobic teachers. The final scene, which begins with Vivian awkwardly attempting to corral the students so that she can give a speech about sexism at their high school, gets progressively stronger, especially when the camera pans away from Vivian to share the experiences of the other young women who have dealt with violent behavior at school. Moxie is more educational than groundbreaking, and feels more archival than refreshing and new, but I’m glad that it exists for those young viewers who could use a bit more hand-holding as they enter the world of feminism.

Read this Next: In Season 2, “PEN15” Gets Real About Teenage Slut-Shaming 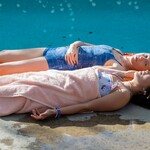 by Rachel Charlene Lewis
While the first season of “PEN15” highlights teen girls’ sexuality, the second showcases the ways they’re punished for it.