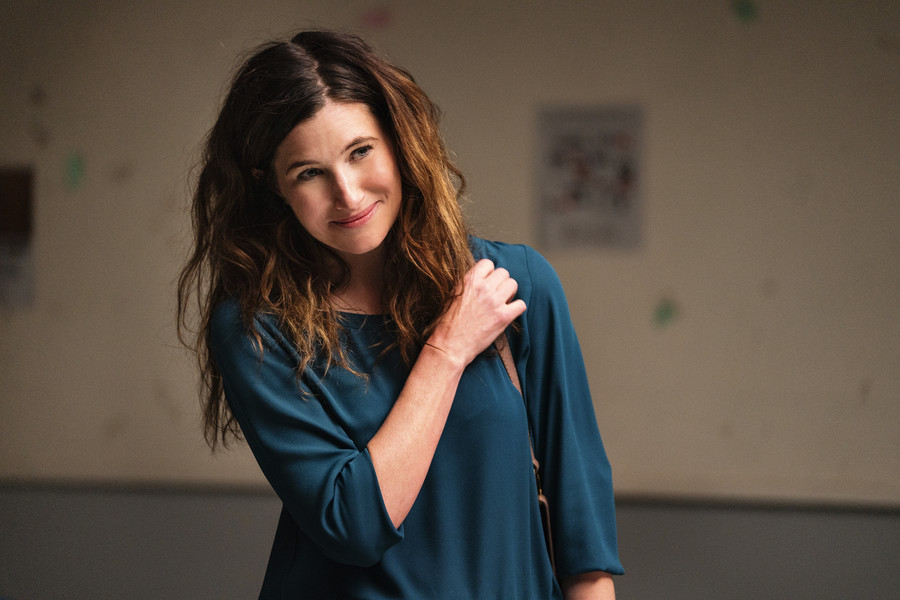 I should probably warn you that I’m about to be that universal irritant, the person who insists that The Book Was Better. I don’t want to be that person, because no one likes that person, and generally I’m not—mostly because it tends to be clear, in adaptations of books to the big or small screens, why decisions about narrative are made. There’s some apparent logic to the creators’ solutions about what parts of the book do and don’t translate to screen and serve to move the story forward, about when it makes sense to go off-book, or to consolidate several characters into one.

In the case of Mrs. Fletcher, HBO’s adaptation of Tom Perotta’s 2017 novel, none of that is clear. Unlike sagas of voluminous world-building like Game of Thrones, Mrs. Fletcher has a premise that’s as straightforward as can be. It’s the story of Eve Fletcher (Kathryn Hahn) a 46-year-old suburban woman entering the third act of her life: Her lacrosse-bro son, Brendan (Jackson White) is headed off to college, her feckless ex-husband, Ted (Josh Hamilton), is more or less out of her life, and her feeling of being unmoored is spiked with an electric charge of possibilities. She signs up for a writing class at the community college; she makes new friends; she answers a stranger’s question of “What do you do?” with a deadpan “I watch a lot of porn.”

Eve is part of a recent spate of middle-ageish white women grappling with the question of what happens when your primary identity of wife and mother doesn’t feel like enough—and what happens when that identity falls away and leaves you with a nominal freedom circumscribed by a world suspicious of all women. Her counterparts in shows like Dead to Me, Divorce, and Better Things, among others, are timely and multifaceted in part because so many of them are characters brought to life by women writers and directors.

And Perotta is a prodigiously adaptable writer whose previous screen projects center complex women—from dark-comedy cult favorite Election to the sprawling consideration of humanity and faith The Leftovers—and the directors tapped for Mrs. Fletcher’s seven episodes are women (Nicole Holofcener, Gillian Robespierre, Liesl Tommy) who similarly revel in messy, even contradictory heroines. On paper, Mrs. Fletcher is a slam dunk. In execution, not so much. If I hadn’t read the book, it would have come across as simply a wildly disjointed, ensemble-ish effort that couldn’t decide whether it was comedy or drama and settled for neither. Because I did, the show ended up feeling like an actual affront to its source material.

Any complexity in Brendan, meanwhile, is likewise drained out. He sets off for college a confident, popular, and academically indifferent jock who reflexively bullies outsiders and lacks any curiosity about others. Once there, however, his desire for a carefree campus life of drinking, hookups, and bro bonding is hampered by the very identity that granted him such easy confidence in the first place. The realization that, in this new environment, his white maleness is as much a liability as an asset is a shock to the system, as destabilizing to his daily life as the anonymous MILF text is to his mother’s; even the jocks he meets would rather talk about environmental cap-and-trade policy than lacrosse. But any illustrative internal monologue—in the book, Brendan is the only character written in the first person—is conveyed in either looks of blank surprise or self-pitying complaints about people taking him at face value when he’s never bothered to be deeper than that. (“I’m not a ‘straight, cis white boy.’ I’m Brendan.”)

Without the novel’s insight into the parallels between Eve’s and Brendan’s unsettling new lives, the series’ narrative hangs on two characters who, after the first episode, have decreasing contact with and connection to one another. The unlikely thread that comes to link mother and son once she’s delivered him to college is porn—or, perhaps more accurately, the deflating outcomes of fantasy disconnected from humanity. Mrs. Fletcher offers no real interrogation of porn’s role in, on one hand, the apparent comedy of Eve’s sudden compulsion to spend her days and nights scrolling MILF clips on her laptop; or, on the other, Brendan’s unthinking investment in hetero porn’s language of rote conquest, which sours a promising new relationship. There’s no sense of interiority in the small-screen versions of their characters, so we end up watching them individually bumble into questionable decisions with no understanding of why we should care.

Among other things, this is a tremendous waste of Hahn, who has plenty of experience playing mature women unexpectedly animated by a sexual bolt from the blue: The obsessive “I” of the Amazon series I Love Dick, the stripper-befriending unfulfilled wife and mother of Afternoon Delight, the wildly inappropriate stepsister-in-law of Step Brothers. In the fantasies that begin encroaching on daily activities like grocery shopping, Eve is confident and smooth; in her actual life, most of her unfamiliar, chaotic desires are telegraphed via a furrowed brow. It’s only in the last episode that she’s able to bring the fantasy to her reality, in the rare onscreen threesome that revels as much in the afterglow of intimate, exhausted conversation as it does in the actual sex. It’s a scene that, along with a few others in the series, gives a graceful, frustrating peek at what Mrs. Fletcher could be if it didn’t mistakenly equate a lack of cohesion with a larger statement of things are complicated but also beautiful, am I right?

But unfortunately, that’s more or less where the series ends. Brendan, unexpectedly home from college and in tearful need of his mother, finds her naked and snuggled up to a kid he bullied in high school, along with a total stranger. Maybe it’s unimaginative to long for the comparative closure of the novel, but Mrs. Fletcher’s final shot of mother and son, standing on the steps of their home in separate cones of silence, doesn’t feel like the moodily ambiguous turning point it wants to be. We know too well that when women—no matter their age—flex their sexual agency, they rarely get to control the resulting narratives and judgments about it. If the scene is powerful, it’s because it’s a cipher; something that, as one interview with Hahn concluded, “challenges the viewer as much as it challenges the character.” The real challenge, though, would be to acknowledge how difficult it remains to tell a story that can give to female characters with one hand and not take away with the other.

Read this Next: Jessica Fletcher of "Murder, She Wrote" Is My Anti-Ageism Heroine

I Got All My Sisters With Me