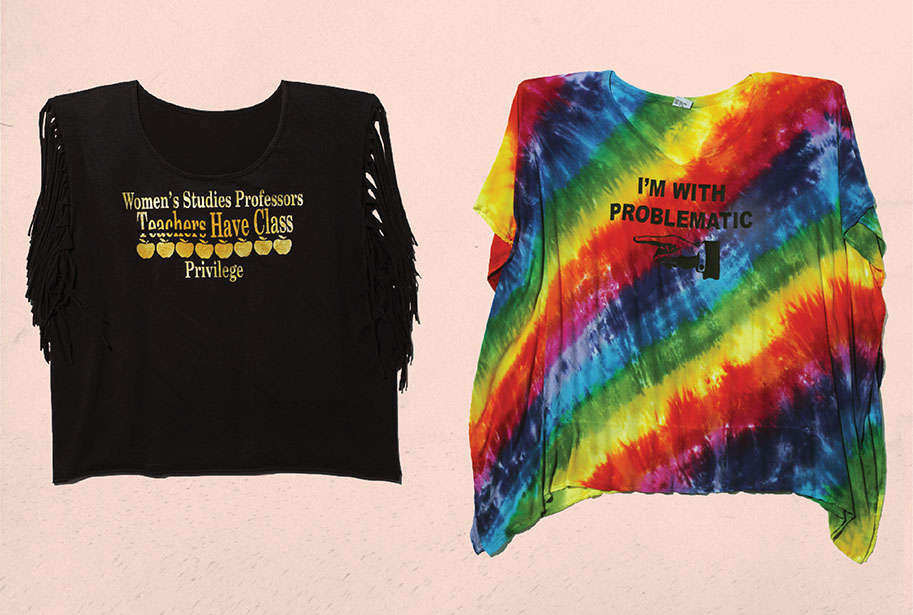 This is a big year for reflecting on riot grrrl. This year marked the 30-year anniversary of The Guerrilla Girls, a Sleater-Kinney reunion, and Bikini Kill announcing the rerelease of their demo tape, “Revolution Girl Style Now.” But all the focus on these groups has often left the diversity of the feminist punk scene out of the spotlight. News stories waxing nostalgic over Olympia in the ‘90s have the habit of ignoring the influences of genderqueer people, Black women, and other women of color. In reality, riot grrrl was never meant to have a single poster girl or be defined by one band. Riot grrrl identity is multi-dimensional, encompassing various mediums, political ideals, and lifestyles. It’s about DIY community-building, and working collaboratively against violence, capitalism, white supremacy, and the patriarchal state.

The heterogeneity of riot grrrl is explored in Alien She, the first museum exhibition to examine riot grrrl’s lasting impact on contemporary art. Rather than looking backward to catalogue the well-known bands of yester-year, Alien She curators Astria Suparak and Ceci Moss spent years bringing together current artists and activists who were inspired by creative resistance. Alien She is a traveling exhibition of visual art, short films, crafts, and interactive projects that has been shown across the country, including Pittsburgh, Philadelphia, San Francisco, and Newport Beach. This past week, the duo ended their national tour at the Museum of Contemporary Craft and Pacific Northwest College of Art in Portland, OR. As opposed to a condensed history of riot grrrl, Alien She features a wide selection of artists, chosen based on a wide range of mediums. “Reflecting riot grrrl’s spirit of cooperation, all of the artists we selected have worked collaboratively, and most have built platforms for other artists and under-recognized groups to connect, encourage one another, share resources and self-publish,” explains Suparak.

Overall, the exhibition demonstrates how activism and art have destabilized tradition by sharing ideas within networks, especially online. “The Internet emerged around the same time as the riot grrrl movement in the 1990’s, and they coincided,” says Suparak. The spread of riot grrrl can be traced through digital technology all the way from AOL message boards to current Tumblr niches. In addition to incorporating these collective voices into the exhibition through hundreds of zines, the exhibition includes a digital riot grrrl census and map that catalog chapters from twenty-six countries around the world.

Each piece featured in Alien She highlights a need for collaboration and intentional spaces. For example, video excerpts from Miranda July’s project “Joanie 4 Jackie” play on a loop during the exhibition. Inspired by the Pacific Northwest’s riot grrrl scene, July dropped out of film school at UC Santa Cruz and began an underground video distribution network where women filmmakers could submit their work. “Joanie 4 Jackie” became a chain letter where women would create and exist outside of a male-dominated film world. Right next to those films is a more recent Miranda July project: the mobile app Somebody™, which July launched in 2014. With the app, one user sends an electronic message to a friend. Another app user is detected, who delivers the message to its recipient in person. Somebody™ reminds us of the way we communicated prior to smartphones, paying homage to IRL interaction.

On one wall of the exhibition, artist Stephanie Syjuco provides a thoughtful criticism of capitalism through a project called “Free Texts.” She covers an entire wall with tear-off flyers advertising downloadable free texts, such as David Graeber’s Debt: The First 5,000 Years, Adorno and Horkheimer’s The Culture Industry, and Donna Haraway’s Simians, Cyborgs, and Women. It is an interactive protest—dependent on the artist’s curation and audience participation. It is also geographically specific; each “Free Text” wall has been curated with regard to the location of the exhibition. While the traditional art gallery caters to the notion of commodifying and selling art, Syjuco contests this by giving back to the viewer—directly engaging a criticism of capitalism and private information. 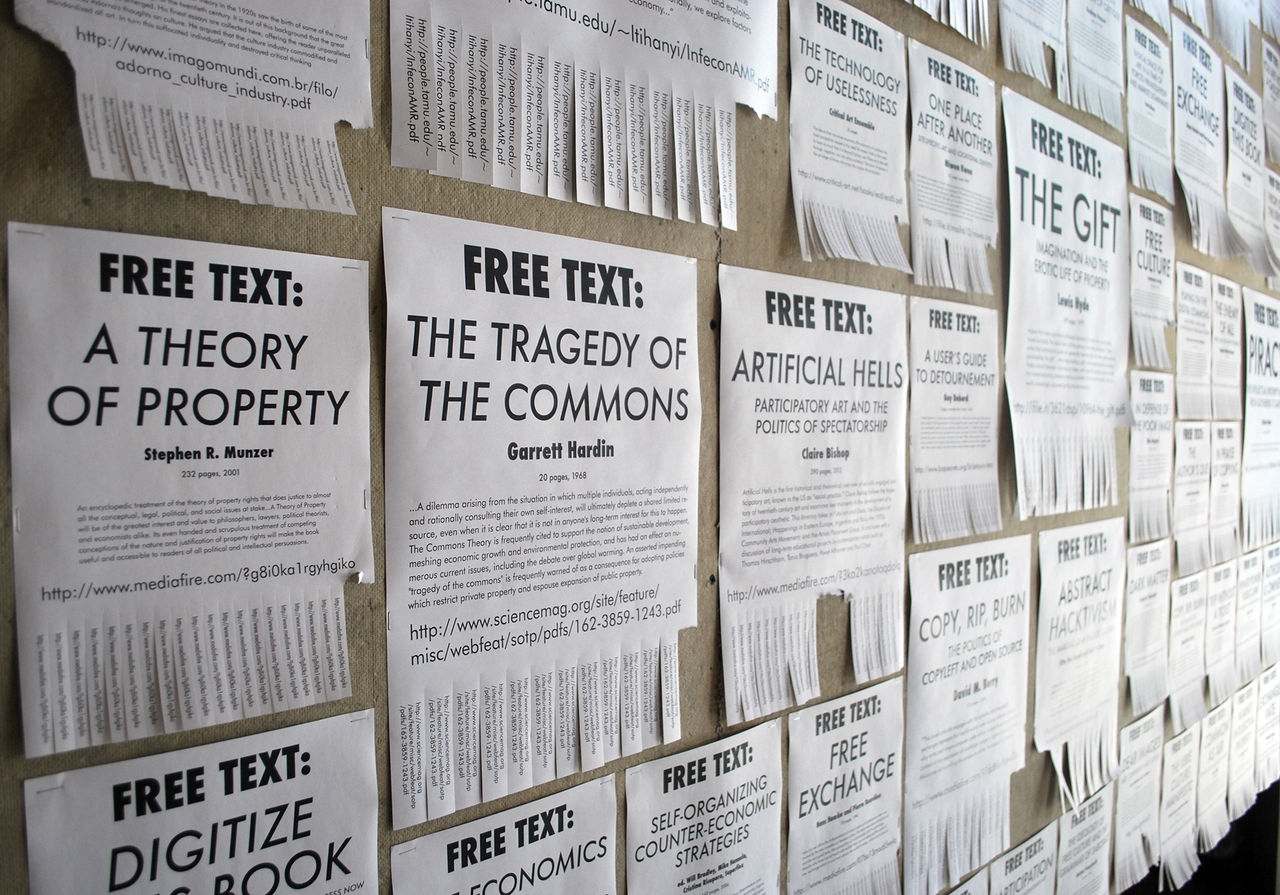 The exhibition's craft art puts the “alien” in Alien She, depicting the many forms the human body can become. As craft artist L.J. Roberts describes, craft is often associated with “undesirable traits—the feminine, the amateur, the anti-intellectual, the ethnic, the non-white and the lower or working class.” Their work tackles empowerment and assertion of their queer identity. For Alien She, Roberts wove a huge triangular coming out banner. Its message is impossible to miss as it dominates a whole wall with the phrase “Mom Knows Now.” Next to the banner in the Museum of Contemporary Craft gallery, viewers gravitated to Allyson Mitchell’s “Ladies Sasquatch,” enormous fabric sculptures made from taxidermy supplies and found textiles. 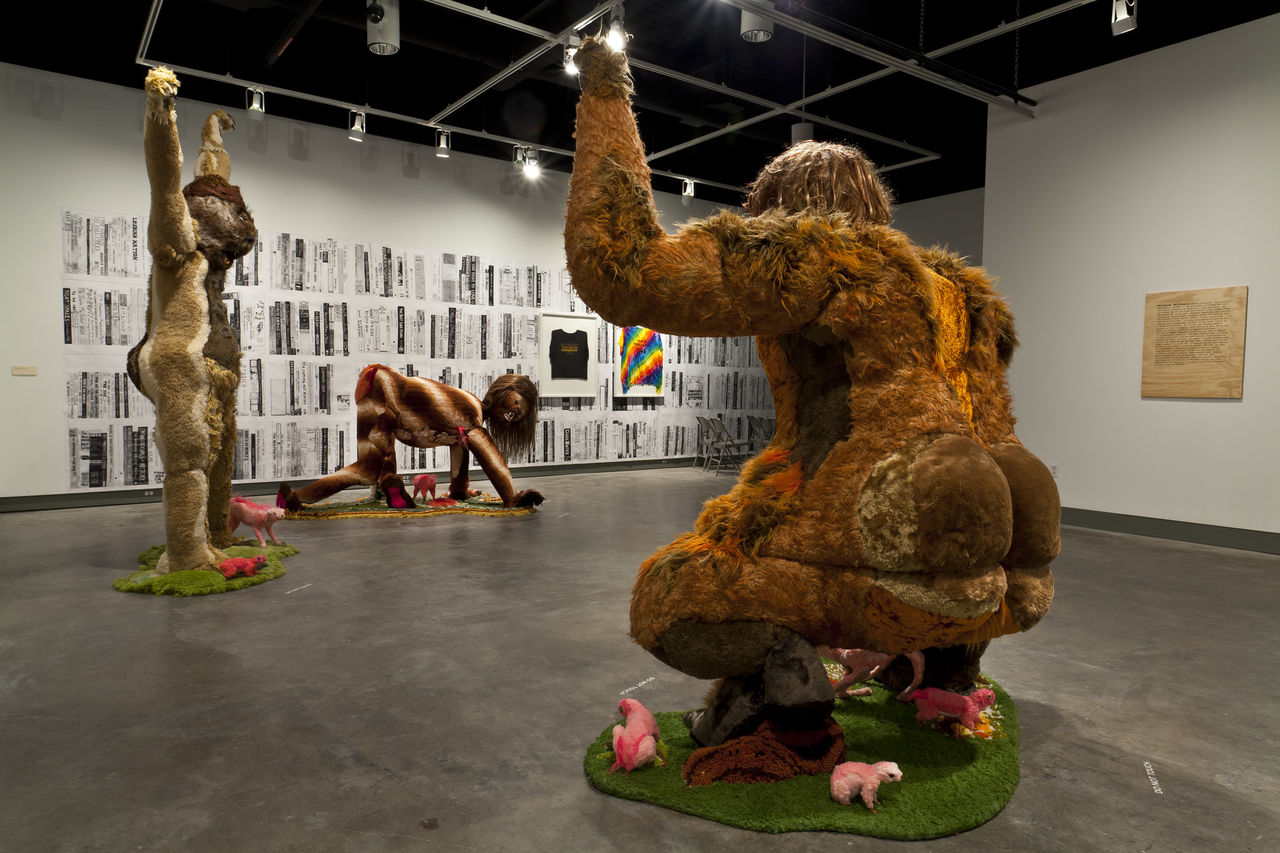 Allyson Mitchell's furry Ladies Sasquatch pose in the middle of the gallery. On the wall behind them is her installation Recommended Reading. Photos courtesy of the artist and Katharine Mulherin Gallery, Toronto.

Also featured in Alien She is Ginger Brooks Takahashi’s LTTR, an annual independent genderqueer feminist art journal. A complete index of the journal is available online, featuring artwork, critical essays, and creative writing. The content for each issue was initiated through the World Wide Web and interpersonal relationships, and later selected by consensus. Near these archives, her piece “Feminist Body Pillow” piles together stuffed t-shirts. It includes a famous Guerilla Girls print, altered by Ridykeulous, now titled “The Advantages of Being a Lesbian Woman Artist”.

Throughout Alien She, there is a spirit of resistance, one in which we can all join. Curators Suparak and Moss have pulled together a show that unravels the depiction of riot grrrl as a solely music genre. They have turned it into a living, historic archive. And they didn’t do it alone—joining forces with people from different regions, including Bard College, the Fales Library at NYU, and personal collections from many people around the world.

Although the title of the exhibition alludes to Bikini Kill’s song “Alien She,” its aim is to highlight the influence riot grrrl had on many people into adulthood. Suparak and Moss are not alienated from the subject as curators—both were involved in their local riot grrrl scenes as teenagers in the nineties (Moss in the East Bay and Suparak in Los Angeles). “Not coincidentally, all the grrrls we knew back then have gone on to become artists, educators, [and] activists,” says Suparak. “The music and zine histories of riot grrrl have been the subject of recent books and documentaries, but we were particularly interested in how the movement has influenced artists today.” Alien She demonstrates the fluidity of the movement and its resonance in the contemporary digital world today.

Alien She is currently on display at the Museum of Contemporary Craft and Pacific Northwest College’s 511 Gallery until January 9, 2016. As part of the show, Bitch Media Art Director Kristin Rogers Brown has pulled together ephemera from organizational and staff personal archives for a behind-the-scenes look at designs of Bitch. These items will be featured in the Community Showcase at the Museum of Contemporary Craft, opening Oct. 1.