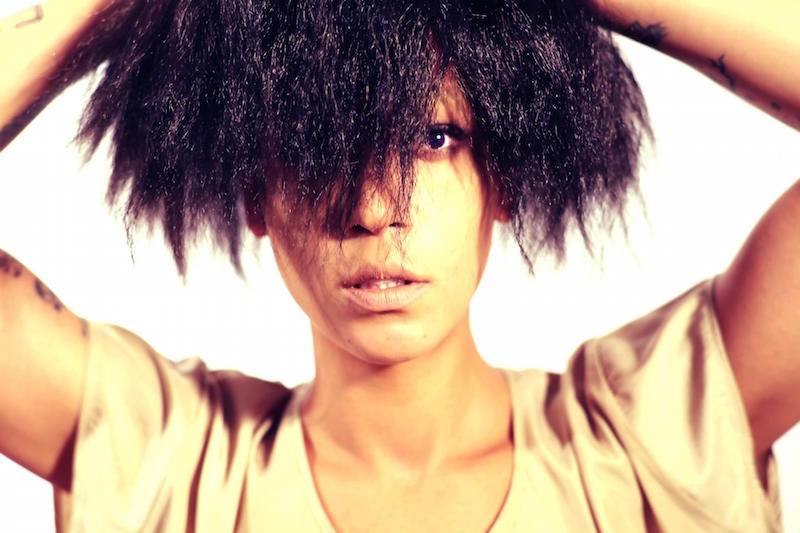 When she’s talking, musician Imani Coppola is constantly switching between different voices, slipping from sounding like an in-the-know music industry bigwig to a reflective, dour intellectual. It's the same breadth and eclectic sensibility that defines her music. Imani Coppola came on the scene in 1997 as a rapping, singing, and violin-playing pop surrealist, releasing her debut album Chupacabra when she was just 18. The lead single “Legend of a Cowgirl” was a ballsy, tongue-in-cheek anthem of female desire. She has defied genre boundaries ever since. Her last solo album, The Glass Wall (2012), included riffs on glam rock, new wave and trance, all infused with her characteristic playfulness and moments of striking honesty and lyricism.

In recent years, Coppola has been half of soul-pop duo Little Jackie. Now, she’s working on a new solo album, Hypocrites, “a mix of trap music, hip hop and pop” which will be out this spring or summer. She's also working as a songwriter for several artists and plays in the punk band Pussy Story with Nikolitsa Boutieros.

We talked about her diverse musical work and her search for creative community.

EMMA RAULT: What did you listen to as a kid?
IMANI COPPOLA: We weren't exposed to much popular culture. We had Herbie Hancock, Manhattan Transfer, Miles Davis. And you know what, I fucking hated jazz back then. It sounded like different characters, like a duck and a goose having an argument. Everyone was always freaking arguing in my family and it was like a reflection of that.

When you started making music, was there anyone that informed your genre-hopping style and use of personas?
When I saw the Spice Girls come out, I was like: I could do anything! I think that might be the most honest thing I've ever said in my life. They were the only people rapping and singing in a group that had all different varieties of things. I think I am a result of the Spice Girls. [laughs]

Your primary archetype is what I would call “the female shmuck”: a woman down on her luck, but performative about it. That seems quite rare.
I think girls are so burdened by their sexuality in music. When I write, it's sexless, unless I'm talking about cock or tits or whatever. That's a place to be completely free from that and have your own point of view, male or female.

The other day I saw a girl wearing a sweatshirt saying “gender is over” and I was like, “Wow, this is really happening!” A woman's perspective has only been written by men, forever. It's really time for women to own their voice and get louder than ever. I think my relationships have been hard because I do like cock, I just don't like the men attached to it. [laughs] It's like the Black Lives Matter movement: White people are doing their research now and realizing “Holy shit, this is fucked up.” I want men to do that for women.

Don't you feel people are increasingly aware of these things?
This guy said to me once that all Black people have PTSD. I thought he was the biggest racist white dirtbag ever but he just got it. It is slowly creeping up on people. 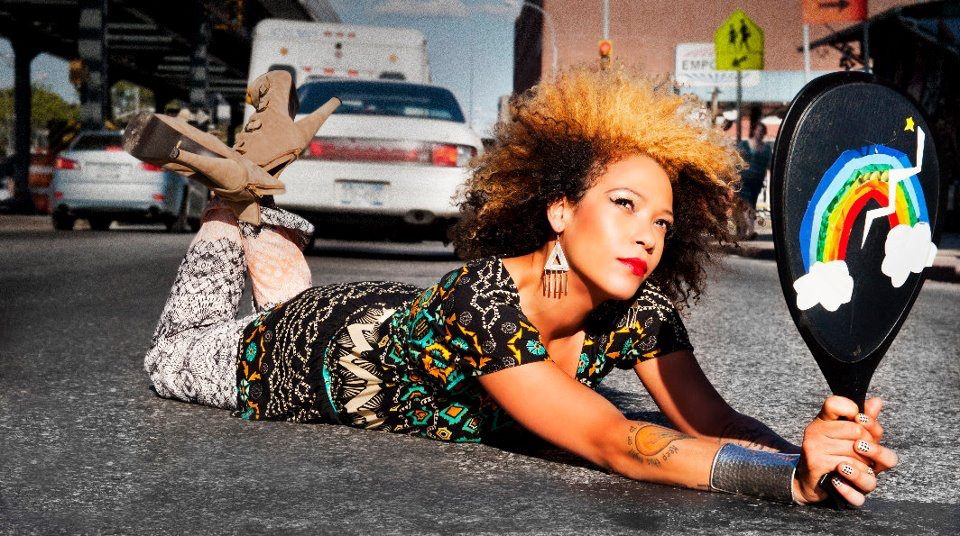 Imani Coppola as part of the duo Little Jackie. Photo via Facebook.

Do you feel your experience in the music industry has been colored by your gender?
And my color. Fuck yeah. I'm considered difficult. Would you ever call a man with an opinion difficult? I've been pigeonholed so many times. Like, because I'm brown I do hip-hop. I've been dealing with this shit my entire life, and I'm so over it. When someone expects me to be what they think Black people are like based on the TV they've been watching, I just tune out. I have no time for that shit.

The fact that I am this dynamic thing, I gotta be true to that. I wanna rock out one second and then do hip-hop. I'm sorry it confuses you but it makes me very happy. Maybe I was exposed to too much music, or maybe jazz fucked me up. Maybe I'm doing to other people what was done to me as a child.

Your solo last album, The Glass Wall, was very dystopian. A change of perspective?
Definitely. That was after a very lonely period where I was only really interacting with technology. I was sleeping next to my laptop, socializing through my phone, fucking my dildo—my whole life was this technological prison. I realized you have to set your own boundaries: put technology aside and reclaim your life.

Being a New Yorker really tests your humanity. I recommend biannual ‘shrooms–something that connects you. Whatever control you can let go of, that's what you have to focus on. Otherwise you're gonna go through life with your eyes closed.

Are you religious or spiritual?
I do have a deep connection to spirituality. My name [Imani] means “faith.” I just became ordained. I always had a fantasy of starting my own religion. My mission statement would be: “Be not the asshole you will inevitably become, but the person you were truly intended to be.” People have so many layers. It's a reaction to life, but it's about fucking peeling that shit off. But yeah, my mom's spiritual as hell. I'm part witch, too, and I do the tarot; I try to pull one daily. The last one I got was the Star. That was reassuring during my time of self-doubt.

You're working on your next album, Hypocrites. Is “hypocrites” the main concept?
I just like the title, because I'm a hypocrite; we're all hypocrites. There will be two parts to this album: “Laugh” and “Cry.” I guess that's hypocritical. [laughs]

Your Soundcloud contains a lot more experimental stuff.
Some things like the more poppy, commercial shit I am totally embarrassed about. But stuff that I gotta laugh at or that upsets or challenges people, yes please, get out there. I want people to know that it's okay to let shit rip, to break your own formula.

Finally: What is the last dream you had?
This morning I dreamt I was in Russia on some sort of songwriting retreat with my friend Jesse, and the train was leaving. We were arguing in the hotel. He left, I realized I wasn't packed and the more I tried to shove into my bag, the more I saw. There was no room to fit all of those crucial necessities. So I walked out with a big pile of shit and got down there and I saw a bunch of women, also waiting for the train, also late, putting on their make-up still and just being women, and I'm like: oh, okay!

Hearing myself say this, I feel like I'm being rushed by men, or I'm not in a place where I feel comfortable. I'm always trying to fucking catch up. But there is a place —I know there is a place—where there are women, where I can just be myself without having to conform or get into the male formula. This industry is very male-dominated, and sometimes if you even mention you have a menstrual cramp they'll get offended, and it makes you uncomfortable with yourself or angry. You don't need to feel like that all the time.