My Experience Caucusing for Clinton in Rural Washington | Bitch Media

My Experience Caucusing for Clinton in Rural Washington

Please note: Bitch Media does not endorse political candidates. This is a personal column by writer Everett Maroon.

Beautiful Walla Walla County is home to roughly 50,000 residents in the far southeast corner of Washington state. It is rural, a scrubland, and decidedly conservative. To be a progressive or liberal person in Walla Walla means feeling like one’s vote doesn’t make much difference in any given election. We often count on people in the Seattle metropolitan area to carry the votes we think are most critical, but at the same time, my friends and I sometimes grouse that the “west side” really doesn’t understand our needs or environment. This geographic discord is common in states across America, from the rift between northern Virginia and downstate, or people in Atlanta versus the legislature in the state capitol.

Before going to the presidential caucus in March, I didn’t really know what to expect. I suppose the image in my mind was of 30 or 40 people sitting around a few folding tables and talking about whichever candidates probably had our votes. How different would it be, I wondered, to sit around and talk to my neighbors, the people I see in the park that sits next to my house, about the election? Would we share the same conversations I’d seen in the lengthy comment threads of news outlets reporting on the candidates? Maybe it would be casual, since there would only be a few Democrats at our local caucus.

But when I pulled into the College Place High School parking lot, I actually gasped. Every parking spot held a car. A long line wrapped around the school and the school district office building.

Walla Walla County voted in a clear majority of 58 percent for Mitt Romney in a country where he lost overall by a landslide. Even more voted for John McCain in the 2008 election, which was my first election in the state. Eighty percent of Democrats in the county turned out for those elections but couldn’t compete with the much deeper Republican pool here. So voting in our caucus was perhaps our only chance to place attention on our domestic and foreign policy priorities; it was our sole means of feeling like our opinions mattered, if only to each other. 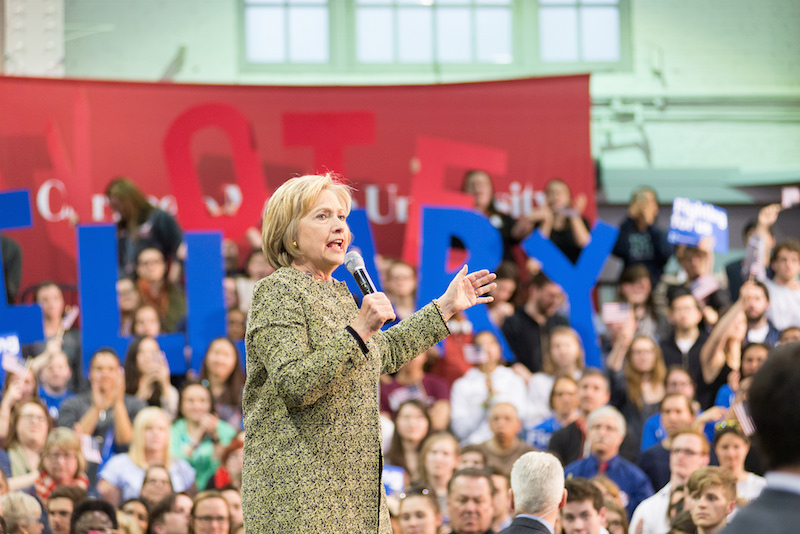 Hillary Clinton at a rally in Pennsylvania this week. Photo by Nathaniel F (Creative Commons).

I struck up a conversation in line with a friend who is a counselor. Her father survived the Holocaust. She had her caucus registration paperwork with her, folded in quarters, pinched between the second and third fingers on her left hand. It flapped a little bit as we talked, whenever she gesticulated, which was often. She was there to vote for Hillary Clinton. I told her I was going to vote for Clinton as well.

“Because she’s the most experienced candidate for president that I’ve ever seen in my lifetime,” I said. I didn’t say that half of the households in Walla Walla County qualified for food stamps, and that I expected, in supporting Clinton, a longtime Supplemental Nutrition Assistance Program (SNAP) advocate, I would help my community. I thought of Clinton’s vocal, stubborn insistence on reproductive rights for women, but I already knew my friends were aware of this. And in 2000, I’d shaken Hillary’s hand in the middle of Fifth Avenue in Manhattan—the place Donald Trump offered to shoot someone to test the loyalty of his supporters—during the gay pride parade, so I was also happy for her support of LGBT rights.

We had lined up between two sets of young people, three women behind us, and two men ahead of us. All of them were voting for Bernie Sanders. As the primary has trudged into the spring, I have heard more and more reasons for Bernie morph into cases against Hillary. I ignore sexist criticisms—like criticizing her speaking tone, her fashion, or for her staying married to her husband—but I am well aware that she has legitimate weaknesses that make some people opt for Sanders: her foreign policy stances in the Middle East, her role as secretary of state in bringing undemocratic regime change to Honduras, and her failure so far to “electrify” younger Democratic voters.

We waited more than an hour for the doors to open. Slowly we crept toward the school, and then I was inside the gymnasium.

Perhaps I got a little giddy. We were doing the thing! The civic duty thing! This was way better than that time I was elected foreperson to that jury where the guy ran over a couple’s mailbox. I took in the sea of Bernie shirts and buttons, and although I knew from Nate Silver that Sanders would most likely win Washington state, reality set in. I was in the minority. Our precinct captain asked if I would be the tally person, presumably because I’d sat down next to her. 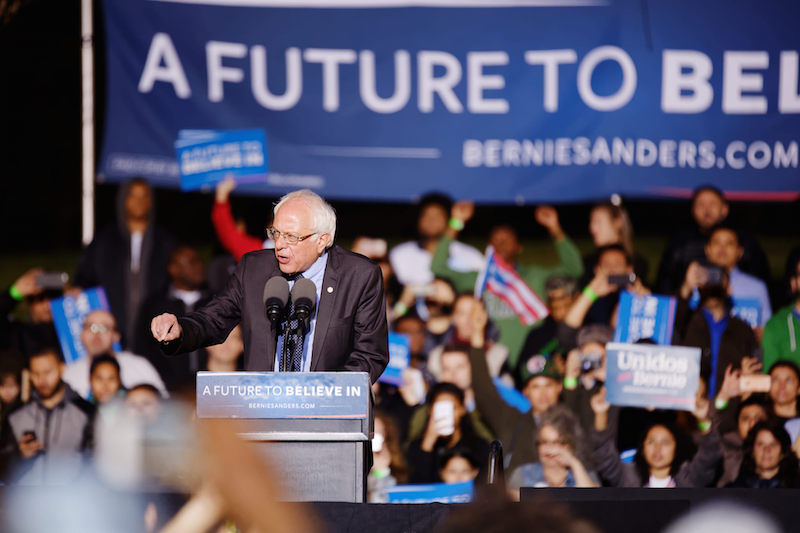 Bernie Sanders at a rally this March in the Bronx. Photo by Michael Vadon (Creative Commons).

We were supposed to begin at 10:30 a.m., but the overflow crowds delayed everything by half an hour. Clearly more people showed up to caucus than party leaders anticipated. At last the organizers announced that we would begin in a few minutes. People continued to stream through the glass front doors.. I saw a chef, the doctor who works with my nonprofit agency, a few more professors, two city employees I knew. Young adults made up the majority of the crowd. Four thousand people? Five? I wasn’t sure.

Four faculty members from my partner’s college were at the table, three of whom were voting Sanders. One of them had approved my partner’s tenure the semester before. “How can you be voting for Clinton?” she asked. “She’s such a war hawk.”

I shrugged. I didn’t want to debate with my wife’s colleagues. I didn’t want to disappoint them, but I also resist the hawk characterization of Clinton’s time as secretary of state. I wasn’t sure pointing out the work she’d done for international women’s rights would win over anyone at the table. I hoped our usual civility and agreeable relationships would survive the caucus.

Our precinct captain said we could begin. I collected all of those folded and wrinkled registration sheets, because they had a box marked “Initial Choice” and a box marked “Final Choice” if any of us changed our minds during the caucus process. We’d sat there long enough before beginning that the other people in my precinct knew I was a Clinton supporter. While I had my iPhone calculator and the short stack of tally sheets in front of me, a woman across from me, wearing a Bernie shirt, piped up.

“Wait a minute. You’re a Clinton supporter. I want to count the sheets.”

It felt like an attack. Like she suspected, what, that I would cheat? I was ruffled; I tried not to show it. Who was to say she was free of bias? I felt upset that someone in my own community didn’t think she could trust me.

“We can all read them together,” I suggested.

We counted the registration ballots, and I made tick marks grouped in fives as each candidate’s name was read. Two people, also Sanders supporters, read over her shoulder. I counted the ballots again after I’d made the count. Nobody was going to say anything wrong happened at our precinct table. 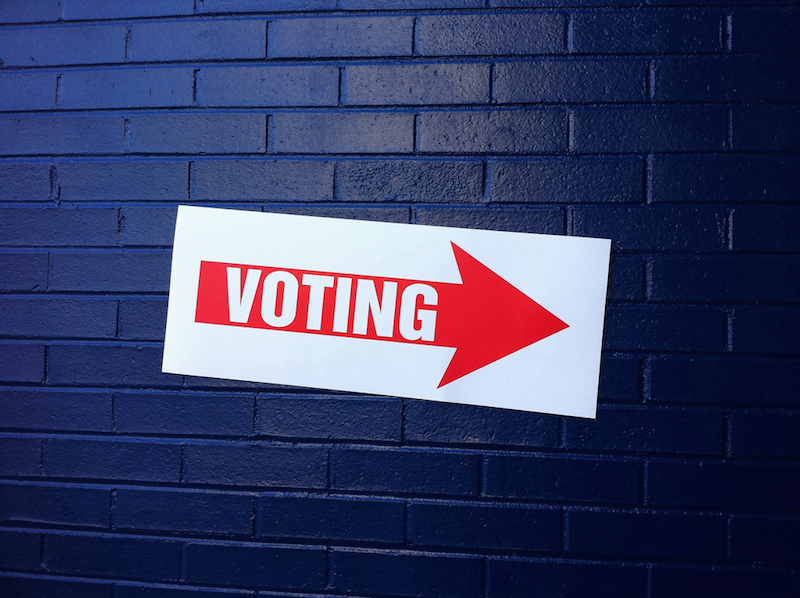 Now it was time to talk about the candidates. This lasted all of twenty seconds. A woman sitting behind me said she’d really like someone to give an impassioned plea for Clinton. Everyone looked at me, even though there were six Clinton votes in our precinct. I was annoyed again, because even though I write about elections, I don’t want to perform my involvement.

I gave an impromptu spiel:

“I think she knows how to do the job, I think she’s a good listener, she has a record of reaching across the aisle to get things done, and even though I don’t agree with her on every issue, I trust her to have good judgment under fire. I’m proud to support her for president. And I think if Sanders was really for a federal minimum wage he would have sponsored such a bill at some point in the past few decades when he was a senator. And I don’t think I can really change anyone’s mind.”

“Does anyone want to change their vote?” asked the precinct captain.

No one did. Welp, I had my say in the democratic process, at least.

As they counted up the votes, I calculated how many delegates would go to Sanders and Clinton. But Democratic caucus math is a strange beast, with delegates assigned by rounding and by looking at remainders. In the final tally of our votes, 81 percent of my precinct went for Sanders and 19 percent went for Clinton. That worked out to Sanders getting two delegates and Clinton getting one.

We then split into sub-caucuses, one for each set of supporters. My next-door neighbor and I were among the minority who’d voted for Clinton. One of the college faculty members stayed in our group, along with a Latino couple who said they thought Clinton was better about immigration reform. We needed to elect a delegate to vote at the county caucus in Walla Walla, who would then perhaps be elected to the state caucus and the national caucus, as unlikely as that would be. Washington state elected 27,000 precinct caucus delegates on March 26, but will only send 67 to Philadelphia for the Democratic National Convention. I said I could go to the county caucus. They selected me as the delegate and my neighbor as the alternate.

Now when I see her in her backyard, I say, “Hi, alternate.” She laughs at that.

Whether they voted for Sanders or Clinton, I got a thrill from seeing people turn out in such large numbers to vote. More than 230,000 people came out to caucus across Washington, their photos of the events filling up my Twitter and Facebook feeds. I could sense their excitement at precincts across the state. That’s part of what caucuses are supposed to do: fire up the most active members of the party. Although my pro-Clinton spiel didn’t convince anyone to change their vote, I didn’t mind. I was excited to see an overflow crowd come out to weigh in on our politics. It was exhilarating to be in a room full of people I know discussing issues I care about, instead of just hearing the hot-air opinions of pundits on TV. Now, if we can just keep people this invested until November.

Relevant: Backtalk: Jemele Is Not Wrong & the Emmys

by Amy Lam
Donald Trump is a white supremacist and that's the truth.