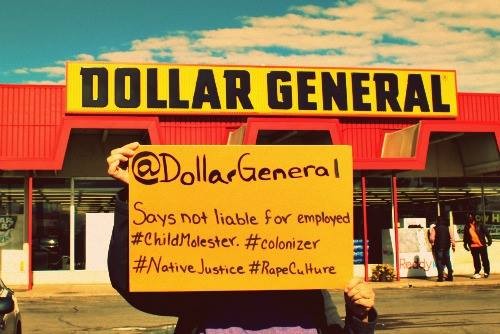 “The Nation shall be strong so long as the hearts of the women are not on the ground.” -Tsistsistas (Cheyenne)

This Monday, the Supreme Court is hearing a case that could make the crisis of sexual violence in Indian Country even worse.

In 2003, a 13-year-old boy participated in a youth-opportunity job program. Through the program, the teenager was paid by his tribe, the Mississippi Band of Choctaw Indians, to work at a Dollar General store on Tribal Trust land. He would get work experience, the Dollar General would get free labor. But something terrible happened: While on the job, the 13-year-old says he was sexually assaulted several times by the store’s manager, Dale Townsend. His parents brought an action against Dollar General in Tribal Court, seeking monetary compensation for pain and suffering and to cover the youth’s medical and trauma recovery expenses. The retailer retaliated with a lawsuit of its own, arguing that the Mississippi Band of Choctaws should not have jurisdiction over Dollar General, because the corporate giant is non-Indian. So far, two lower US courts have agreed that the tribe does in fact have civil jurisdiction over Dollar General. But now the case is facing the Supreme Court.

In their opening brief to the Supreme Court, Dollar General argued that tribes should not have jurisdiction over non-Indians at all because tribal courts are unsophisticated and simply incapable of fairly rendering justice. In other words, Native court systems must be inferior and inadequate compared to US court systems. These arguments are not only false (tribal courts are fully capable of fairly rendering justice) but also strikingly similar to arguments used to justify Indian Removal. When pushing for the removal of Cherokee Nation from its homelands in the Southeast, Andrew Jackson attacked the legitimacy of Cherokee Nation’s Supreme Court and argued that is was unsophisticated and inferior. Almost 200 years later, inaccurate claims about the legitimacy of tribal court systems are still powerful enough to, sadly, make it all the way to this nation’s highest court.

But while drawing parallels to historic atrocities, we must not leave our analysis in the past.  It is very tempting to acknowledge and even apologize for the past without confronting the present, especially when it comes to anti-Indigenous racism in the US. It is only useful to understand the history of rape as a tool of genocide when we are ready to recognize the fact that it is still being used today. 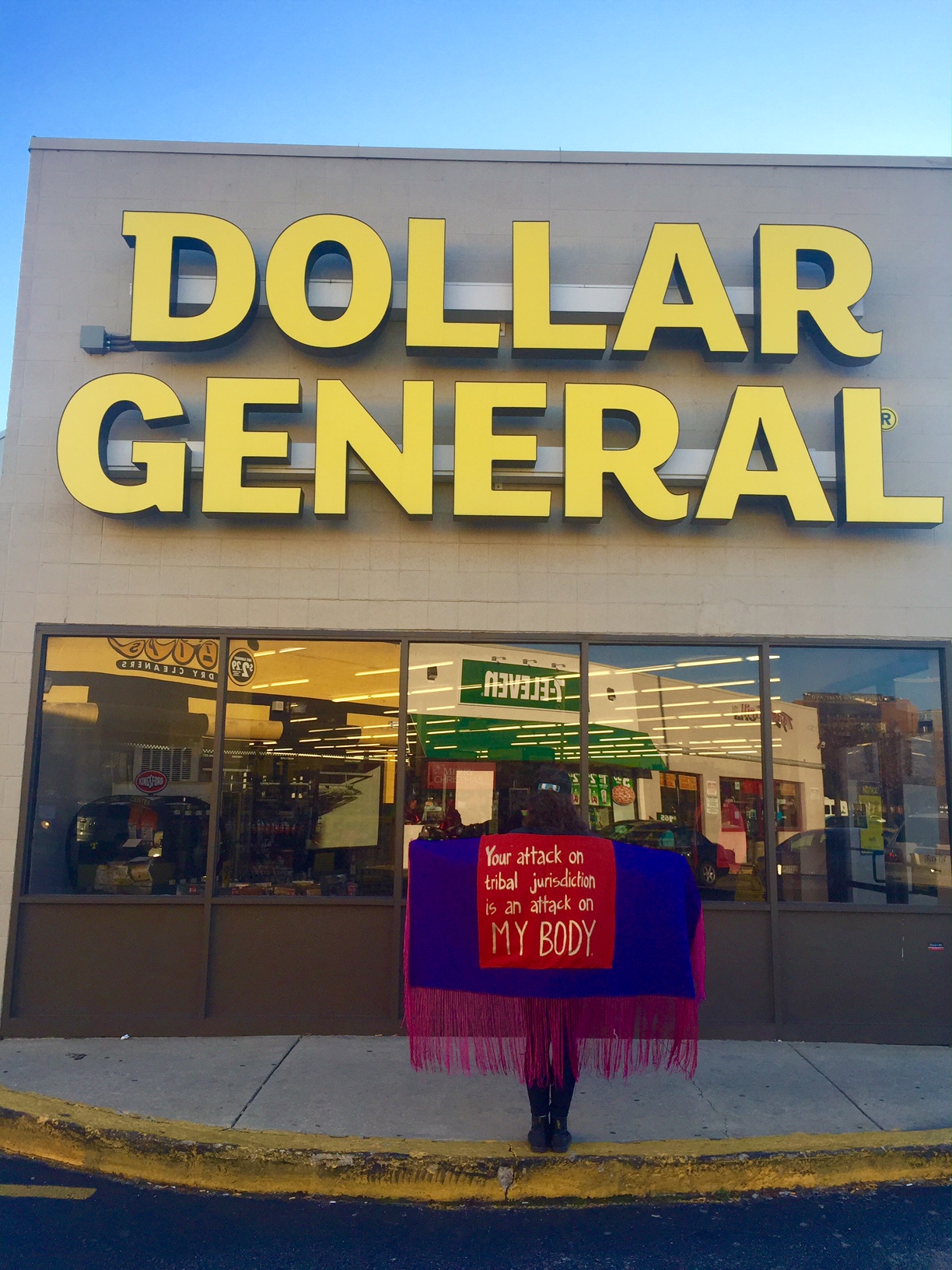 Native women face rates of rape 2.5 times higher than any other women in the United States. On some reservations, Native women are being murdered at a rate 10 times that of the general population. It’s crucial to understand that 70 percent of perpetrators of violence against Native women are non-Native. Under current law, non-Indians can come onto Tribal land and rape, assault, and murder Tribal members and Tribes are prohibited by federal law from prosecuting the offenders. Very violent people are taking advantage of this system by committing these crimes at alarmingly high rates with impunity. This is why so much rides on the verdict in the Dollar General case.

“For many Native women and children survivors, civil jurisdiction isn’t an academic or even a legal question. It’s a matter of life and death,” says domestic violence survivor Diane Millich (Southern Ute Indian Tribe, Colorado), who will be speaking at a rally to be held during the court proceedings on Monday.

Out of alarm and outrage, Native women and leaders in the movement are organizing a demonstration to be held during the oral arguments in Dollar General Corporation v. Mississippi Band of Choctaw Indians. On Monday morning, the National Indigenous Women’s Resource Center (NIWRC) and anti-rape activist group FORCE will demonstrate in front of the Supreme Court with the Monument Quilt, a growing memorial featuring 700 stories from survivors of rape and abuse painted and stitched onto red fabric. 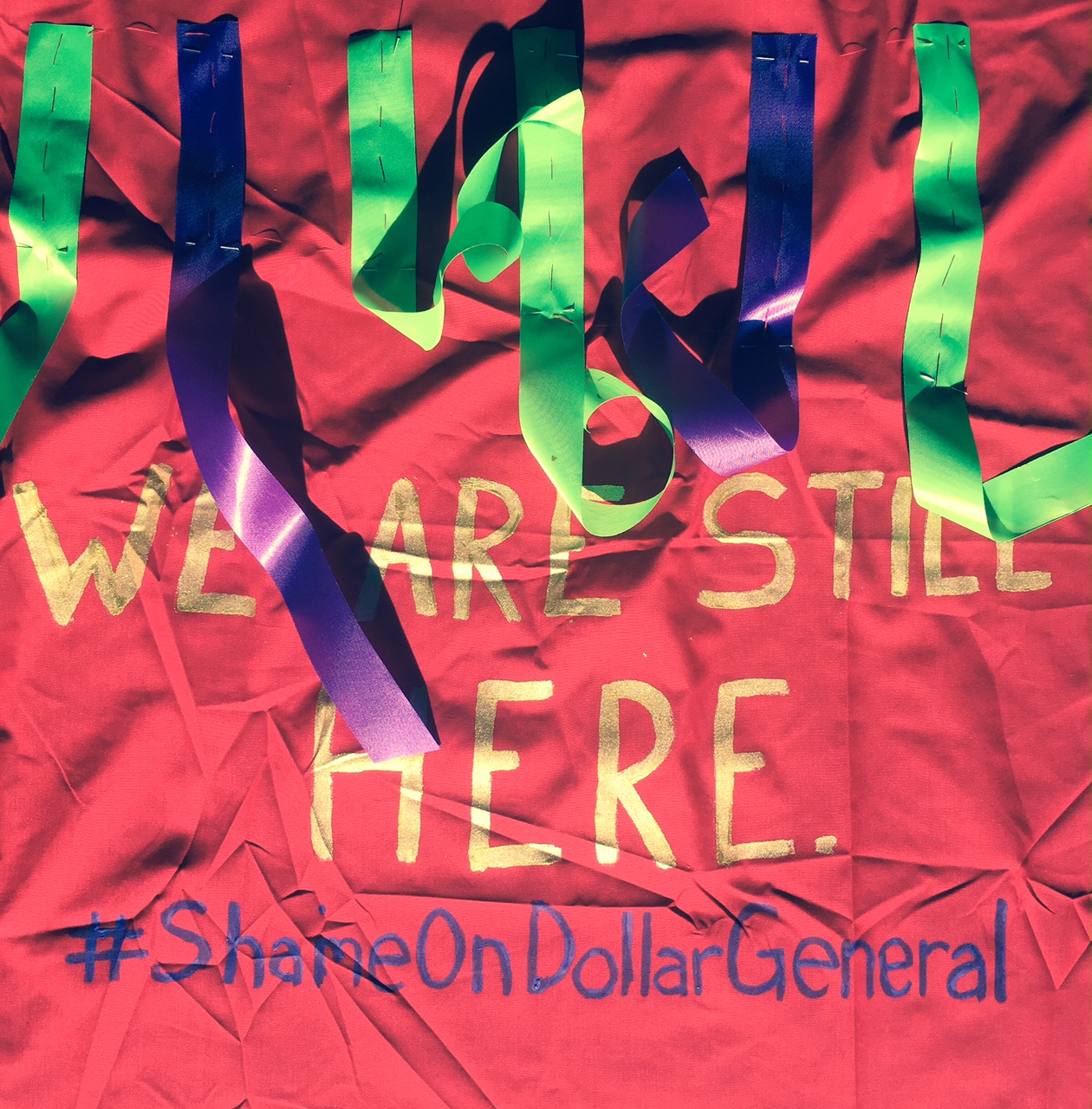 “We are under siege as Native women. The continued acts of domestic violence, sexual assault, stalking, murder, and the missing are the continuation of genocide. When we are under attack so are our Nations and our future generations,” says national anti-sexual assault advocate and survivor Lisa Brunner (White Earth Ojibwe). “I am tired of my people, our children, and future generations being collateral damage of war waged against our Sovereign Tribal Nations. When people ask, ‘When was the last Indian War in the United States?’ my answer is, ‘It never ended.’”

Through survivors telling their own stories, the Monument Quilt seeks to highlight US policies and cultural norms that create our current crisis of rape.  For Native Americans, the unacceptable rates of sexual and domestic violence are rooted in Federal policies that undermine tribal jurisdiction and Native Nation’s ability to protect their own citizens from harm. As one Native survivor’s quilt square reads, “Your attack on tribal jurisdiction is an attack on MY BODY.”

Here are two ways to get involved with this case:

1) Join the Thunderclap!  With Thunderclap our supporters will push a whole bunch of social media posts all at the same time to generate attention during Monday’s oral arguments. We’re looking for 100 people join this effort to tell the Supreme Court it must uphold tribal jurisdiction to protect Native women and Native youth. More details on how to join this simple but powerful online effort are here.

2) Meet us at the Supreme Court! FORCE and NIWRC are organizing a demonstration on Dec 7th from 9am to 12 noon during the oral arguments in Dollar General v. Mississippi Band of Choctaw Indians. Sign up here and RSVP on Facebook here.

Hey girls! How about talk about American Latin women? We suffer a lot of prejudice from the European guys who thinks that our countries just have prostitutes. We want respect, equality. Stop the misogyny! Stop the xenophobia!
*If you know portuguese, please read my blog: minacontamina.blogspot.com.br