Natural Velvet Disrupts the Whiteness of Rock with “Kristina”

Rock, like many genres, has been historically dominated by white dudes. And rock, like many genres, is being reshaped by musicians of color and queer musicians. Natural Velvet, a punk-rock band based in Baltimore, is one of those bands wrecking the scene. On the heels of their latest album, Mirror to Make You, Natural Velvet spoke to Bitch about disrupting rock’s whiteness and heteronormativity, making space for female rage, and creating music for women.

“It’s All Mine” feels like a summer record, and the video definitely conveys that. What inspired the song’s creation?

Corynne: The song was more or less inspired by my relationship with my ex and his not awesome roommates and friends. I was from outside their group, so they didn’t like me and would routinely tell him that I was a bad girl and that I was no good. One way to really reclaim that bad girl-ness was to write a song where, lyrically, I am agreeing with them and really creating this sense of ownership over it in a positive sense. That was the goal. Ultimately, I wanted to translate that negativity into something positive.

Kim: Also, this record is a little bit more aggressive. I don’t think it’s a party record, but it’s definitely a summer jam, especially with the pool scene. The video was inspired by Gentlemen Prefer Blondes.

Corynne: And specifically Jane Russell’s song “Ain’t There Anyone Here For Love?” in Gentlemen Prefer Blondes. If you’re familiar with that scene, she’s in the gymnasium with the entire Olympic gymnastics team right before the Hayes Code was overturned, so it was very cheeky and underhandedly sexual. All of the gymnasts in that scene were definitely queer men, so they weren’t even interested in what she was selling anyway, so there was this coded camp aesthetic that had to be dealt with in that video. 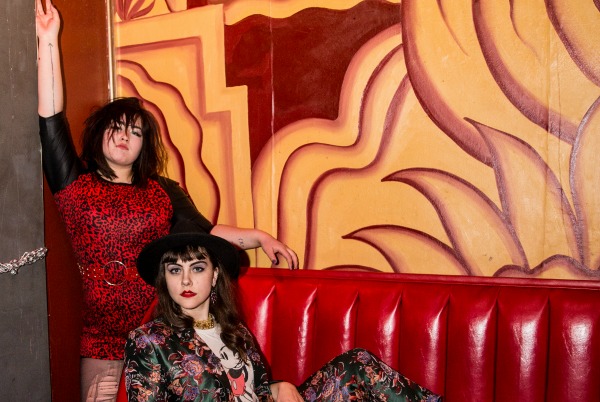 I just made the connection! Now I can see the scene in my mind. What’s interesting about “It’s All Mine” is that it really seems to speak to women being seen and understood as more than stereotypes. Are you conscious of how your music pushes back against sexism? Is that something that you think about as you record and write?

Corynne: Absolutely. I have a minor in gender studies and went to art school, so I’m very familiar with academic feminism. On the other hand, I’ve been out of academia for the past four years, I’m living in the real world and, and I’m really interacting with the world as a woman, so I’ve had encounters with different forms of sexism. So yeah, we’ve already been very aware of that. Our band is made up of two women and two queer men, so we do have a very specific voice and we’re writing from a feminist standpoint.

Kim: Lyrically, we’re very aware of that. We definitely play with a lot of the “bad girl” and “villainess” stereotypes. Sonically, what I really like is that we’re a band with women, our lead vocalist is a woman, and it’s not super soft. Our music is pretty hard. There’s some pretty soft music on the record, but permitting yourself as a woman and as an artist to be ugly or sound ugly or be mean is really important. In some ways, I think that’s at the heart of our music: Being seen as aggressive and being powered by things that are not necessarily seen as a feminine.

Corynne: A fair bit of it, also, is about vulnerability. “Kristina,” the single we’ve just released, is more or less a love song to a platonic girlfriend of ours that we don’t get to see on a regular basis. In a lot of ways, we chose this song because we wanted to follow something that’s so raucous and classic rock-n-roll with something that has some sentimentality, vulnerability, and is by women for women. We kind of ran that one through the Bechdel test because the entire song, lyrically, is about how we miss her, and it’s softer sonically as well.

In thinking about how emotion is gendered, I’ve read that rage is one of the driving forces of the album. How does that rage show up in this project?

Corynne: Just to offer some back history, DIY music is predominantly male, heterosexual, and white. The scene in Baltimore is a becoming a bit more progressive, but we had a really rough time coming up in that scene for the first couple of years. So a lot of our rage comes from having grown up in the music scene in Baltimore, and having people reject us because we were women and have a specific sound. Sonically, it has to do with creating a very brash, loud, and layered sound that could be interpreted as traditionally masculine.

Kim: The idea that having an emotion, like rage, that’s not driven by masculine heteronormativity is also extremely curious and important. I was taught to never assert myself, raise my voice, or advocate for myself. Just as a lot of men don’t allow themselves to process grief or sadness, women refuse and deny being upset or angry. What happens when you turn that on? Obviously, it’s art, so it’s both a safe and unsafe space. Writing it was safe, but the DIY and punk scene isn’t safe.

Corynne: It’s why we get to assert ourselves with 800 watt amps [laughs]. The pleasure principle of it is that we’re still having fun, too. I love a good angry rock record. 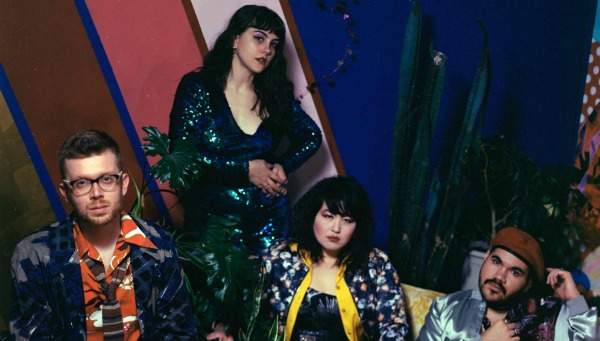 Would you say that 90’s rock music inspired your sound?

Corynne: Yes and no. It’s definitely there, but we also take a lot of inspiration from guitars with a lot of pedals and a lot of that washed-out sound. We’re also inspired by the post-punk of the 1970’s and the early ‘80s. And Kim Gordon on bass.

Your group has been described as “diverse and proudly queer.” How do you champion inclusion in your music and when cultivating your audience? Is being inclusive something all musicians should be more cognizant of?

Kim: Absolutely. I’m queer, I’m one of the guitarists, and I think it’s so important that all musicians are more cognizant. They need to be really aware of how they fit into their scene and into the world at large.

Corynne: To also clarify, three out of the four of us were all students together at the Maryland Institute College of Art, and we were established as friends. We built the band around us being friends. There was no tokenizing in that regard. We just wanted to create music together. I think it’s very important for bands that are looking for diversity to not tokenize, and to really open your minds to a variety of people who can make music and a variety of genres you can take inspiration from.

Kim: I’m Asian-American and it was really important for me to see people who don’t really look like the typical rock guy. Obviously, rock originated from rhythm & blues, and I think it’s really important that people relearn who’s allowed in what space in terms of genre and music. In Baltimore, we and many others are gatekeepers, and we have to be much more aware of who’s being let, metaphorically, into what spaces and open those spaces up for everyone. That’s the only way to move away from “dude rock.”

Corynne: Also, don’t let rapists play shows. I was having a conversation with a friend who books in D.C. about making sure that gatekeepers are bringing in the right people, creating a very diverse scene, and booking diverse shows. Those are more fun anyway, but also making sure that toxic people aren’t allowed back in. 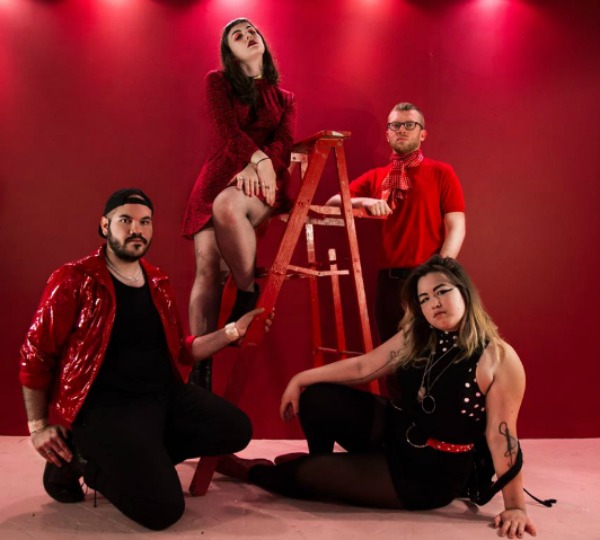 I agree. There shouldn’t be space for harmful things to keep happening.

Kim: It’s bad. It’s also really sad how this happens in our communities. What’s been exciting is seeing how gatekeepers have started responding to [this abuse]. In Baltimore, there’s been a lot more active work toward recognizing problematic people and getting them out of the scene.

Corynne: A lot of the gatekeepers are women and non-binary, trans people, and we try to have a set of ethics around booking diverse shows that aren’t just all white boy bands.

What is the overall theme of Mirror to Make You? What do you want audiences to get from the project?

Corynne: The overall theme was playing with the stereotype of the anti-diva, the villainess, and the bad girl, and making sure she gets the space to speak. When you watch a kid’s cartoon, you usually have a villainess—with the best outfit of the entire show—who’s ruining the lives of the protagonists. She’s always killed or vanquished at the end, and it always broke my heart. So Mirror to Make You is about creating a voice for her. Also, the album speaks about my life experiences. I had a rough go of it as I was writing the record, and the music let me dig deep into why I felt like garbage. Lyrically speaking, this is our most transparent record. In the past, I wrote my lyrics more abstractly because I liked that ambiguity of text, but this time, I thought it was important to be more precise with our language. We wanted people to latch on to our music, tap into their rage, and know that it’s okay. That’s ultimately the goal: We want to create a legitimate space where feminine rage is celebrated.

Kim: On the sonic tip, it’s just having a really loud, fun record where theatrics are absolutely to the nines. This album is also an opportunity to really put a production together. It was much more conceptualized from the get go. It’s pretty gnarly, there’s some interesting deeper cuts. We also did the loudest song I’ve ever written as well as the quietest, softest record ever.

What comes next for Natural Velvet?

Corynne: Lydia Lunch, call me! We just got back from a tour. We’re going out again in the fall. We’re going to tour our butts off, write more records. This is what we love to do. This is the life we’ve built for ourselves. PJ Harvey call me!

Kim: The big thing that’s coming up for this year is that we’re actually playing Hopscotch, a big musical festival in Raleigh, North Carolina. Solange is headlining! We’ll be in shock for the month after. We’ve been in this band for five years. When I think about the future of the band, it’s really about keeping it sustainable. It’s such an important part of my life, and it’s so important to me to keep making music, writing music, and playing it. I hope we can keep doing this forever and forever.