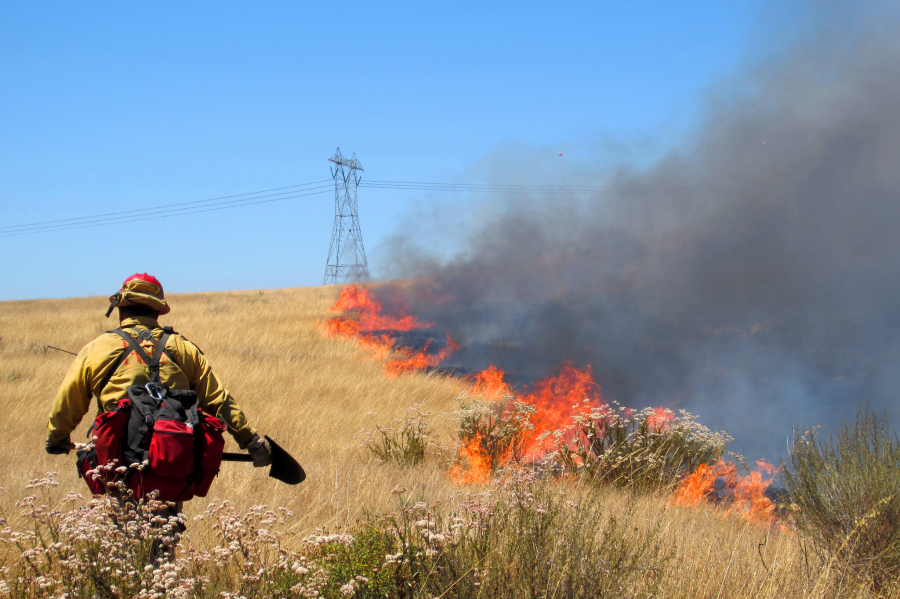 A California firefighter working on a blaze near San Diego in 2012. Photo: US Dept. of Fish and Wildlife, Creative Commons.

California is on fire. The wildfires covering over 100,000 acres of the state are so ferocious that they’re creating their own weather patterns and are visible from space. In the Valley Fire, which is now covering 61,000 acres at five percent containment, firefighters and evacuees reported seeing embers jump roads as trees exploded and homes burned in rearview mirrors. The 71,000 acre Butte Fire, at 30 percent containment, has destroyed 1,000 structures.

Both blazes, as with other severe fires over the course of the summer, are the result of prolonged drought conditions that effectively turned the state into a tinderbox. There has been plenty of praise for the brave and heroic firefighters who are putting themselves the line to keep the flames from consuming homes and lives—already, four firefighters have been injured and fire crews suffered fatalities in earlier incidents this year.  But there’s a part of the story that’s not being told: Who’s actually part of those fire crews?

Some 4,000 of the people working on fire crews in California are prison laborers. These incarcerated people are earning just $1.45 - $3.90 per day an hour while training and $1 day while laboring on the fire’s front lines beside their more well-compensated civilian counterparts.

Since the 1850s, the California Department of Corrections and Rehabilitation, under various names, has offered incarcerated people the opportunity to “volunteer” for work outside the prison system. In these jobs, they earn low pay, but the opportunity of time off for good behavior. The use of prison labor is a time-honored and deeply troubling tradition. Prison labor offers tantalizingly low-costs to employers, often at a profit to the state or the private company that runs the prison supplying contract labor. Some have compared prison labor—the iconic chain gang—to slavery. 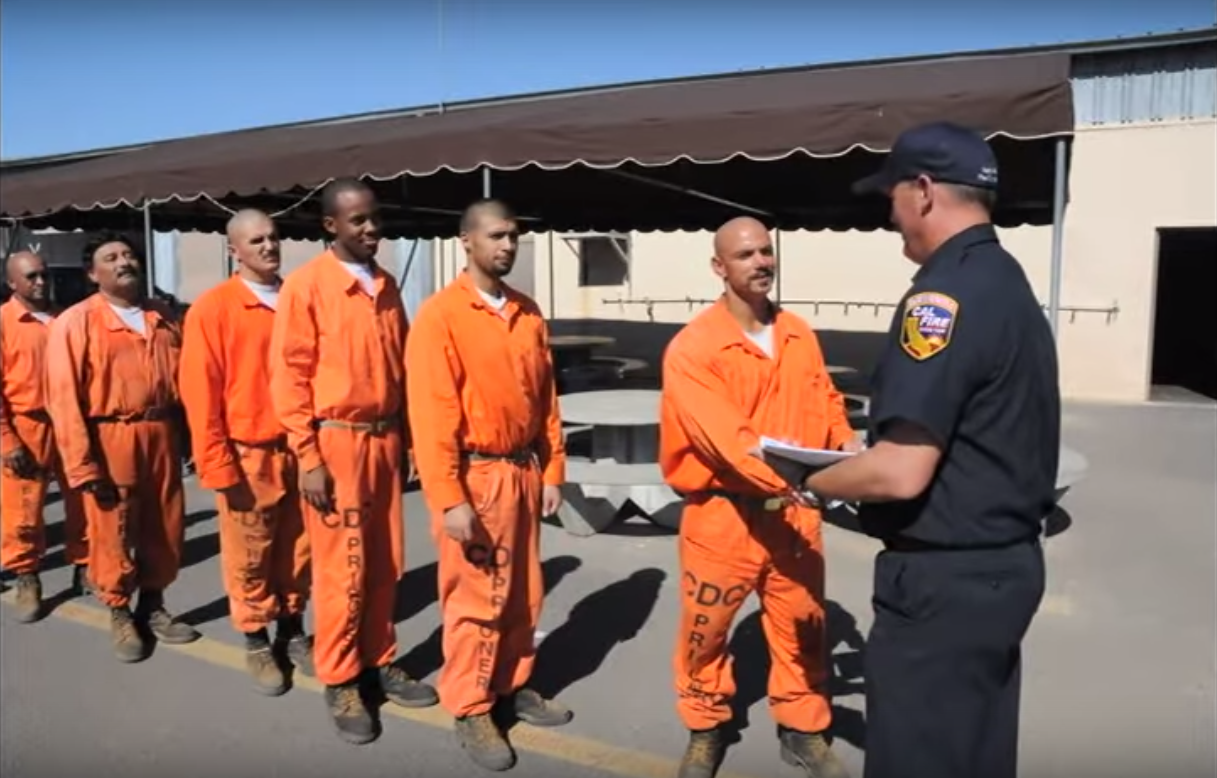 A group of incarcerated men talking with a Cal Fire official, seen in a CA Corrections video about the firefighting program.

In California, the situation has become particularly fraught as a result of a series of colliding circumstances. One is the economics of prison labor. Prisoners make up a cheap labor pool—they’re available for pennies per hour, according to the Los Angeles Times. And companies see them as an essentially disposable resource available for the right price. Workers can be contracted out to private companies supplying products to big names like Victoria’s Secret and Whole Foods, or set to work within the prison system—license plate manufacturing is probably the most iconic example of this kind of work. Prison labor came to the attention of many people this year on the Netflix show Orange is the New Black, when the newly privatized prison offers Piper and others the chance to spend their days sewing lacy undergarments.

Notably, the privatization of the prison-industrial complex has accelerated the problem, as companies like Corrections Corporation of America (CCA) have a strong incentive to generate profits for their shareholders. That requires keeping large numbers of people in prison, and ensuring that normal employment law does not apply to them. There’s a clear conflict of interest between being charged with overseeing prison welfare and conditions versus using prisoners as a source of corporate profits.

Thanks to mandatory sentencing and racism in the justice system, California’s prisons are dangerously overcrowded — so much so, in fact, that in 2002, the state’s prison health care system was put under a receivership on the grounds that the correctional system was failing prisoners when it came to the basic provision of health care, and a judge only considered lifting the mandate for supervision this year. Moreover, in 2011, the Supreme Court in Brown v. Plata deemed the level of overcrowding unconstitutional in a 5-4 ruling, and required California to enter a period of prison realignment, releasing prisoners and pursuing other means to bring the overall inmate population down.

Shockingly, officials like State Attorney Kamala Harris opposed the move on the grounds that it would deprive the prison system of a “labor pool,” no doubt thinking, among other things, of the collaboration between the state’s firefighting department (known as Cal Fire) and the prisons. Cal Fire relies heavily on prison labor, claiming that it saves the state millions of dollars annually. According to Cal Fire, nearly 4,000 incarcerated people—almost half its total firefighting power—serve on fire crews, including a mixture of men and women from low-security facilities, and juveniles. 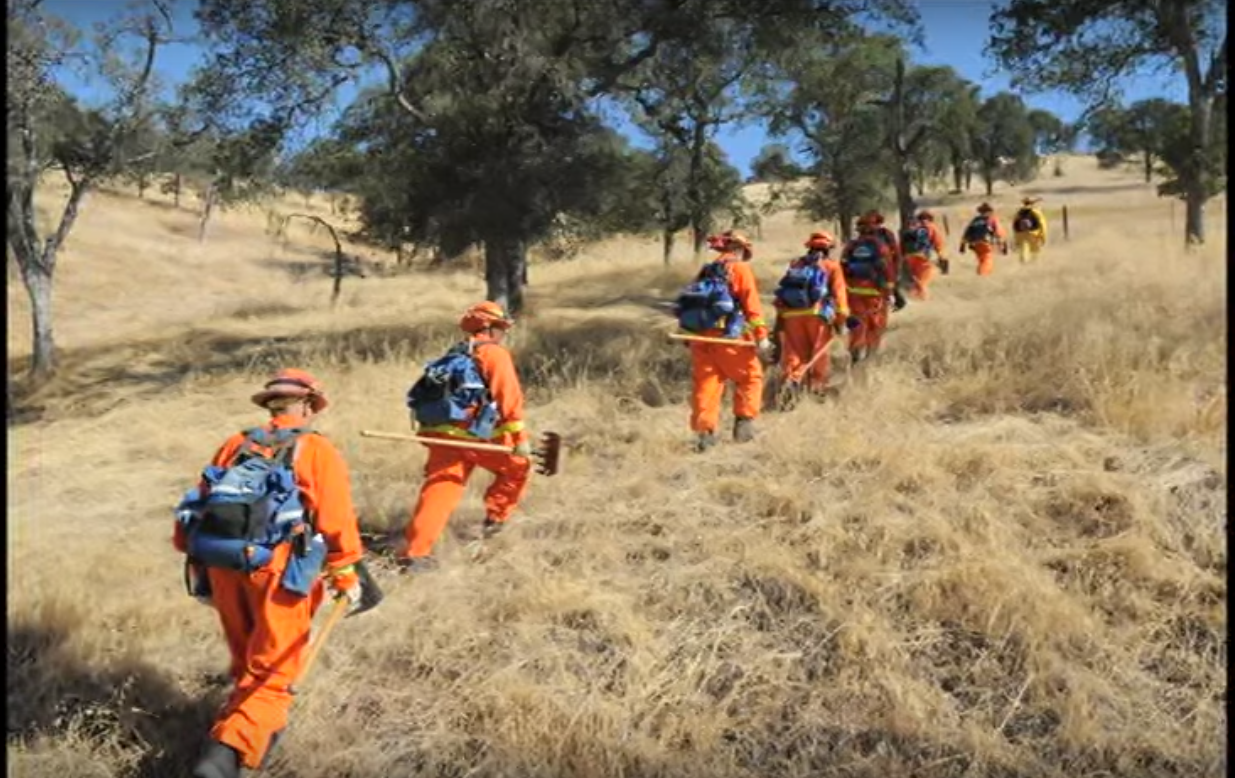 A firefighting crew made up of incarcerated people, seen in a CA Corrections video about the firefighting program.

Jacques D’Elia, who worked for $2/day on a fire crew while in prison, told the Marshall Project: “It’s a hairy adventure, let me tell you. You’re an inmate and you have to do what they say, scary as it is, or else you’re going to get sent back to prison. So they throw you into the worst of it.” He reported carrying 45 pounds of gear as he and others fought their way along the front lines setting backfires, digging firebreaks, and engaging in other laborious and dangerous labor

He spoke with overall positivity about his experiences, saying that going to fire camp “saved his life,” but there’s still a highly disturbing undertone in exploiting people without many options on fire scenes.

Many people are surprised to learn about the size of the inmate firefighting force in California—with 42 adult and two juvenile fire camps scattered across the state—and the wages incarcerated people earn. While time at a fire camp may be marked by pleasant views of the wilderness and the chance to get outside, prisoners still earn less than three dollars a day during training and when they’re not working, and a princely $2 daily wage only available when they’re actively fighting fires.

Climate change is making wildfires across the West more common and much more severe, underscoring the fact that a large and well-trained firefighting labor force is critical for public safety. The excuse that underpaying prisoners for that labor is justified on those grounds, however, is deeply disturbing—the state needs to hire more civilian firefighters who can exercise free choice in seeking employment with Cal Fire. Should prisoners opt to go to fire camps, they need to be provided with the same workplace and employment protections, including minimum wage guarantees, that everyone else receives.

In the larger picture, though, California needs to be reevaluating the vast number of people mired in its justice system and trapped in prisons—even after realignment, the prison system is still packed at nearly 136 percent of capacity. Justifying such overcrowding on the grounds that the state needs a labor pool is nothing short of chilling, and it stinks sharply of eras gone by when people were explicitly kept in the prison system to work for those in positions of power.

Update: This article originally listed the fire crew pay rate at $1/hour. It has been updated to reflect the current daily wage rate listed by the California Department of Corrections for training time as well.