“Crip Camp” Brings Visibility to the History of Disabled Activists 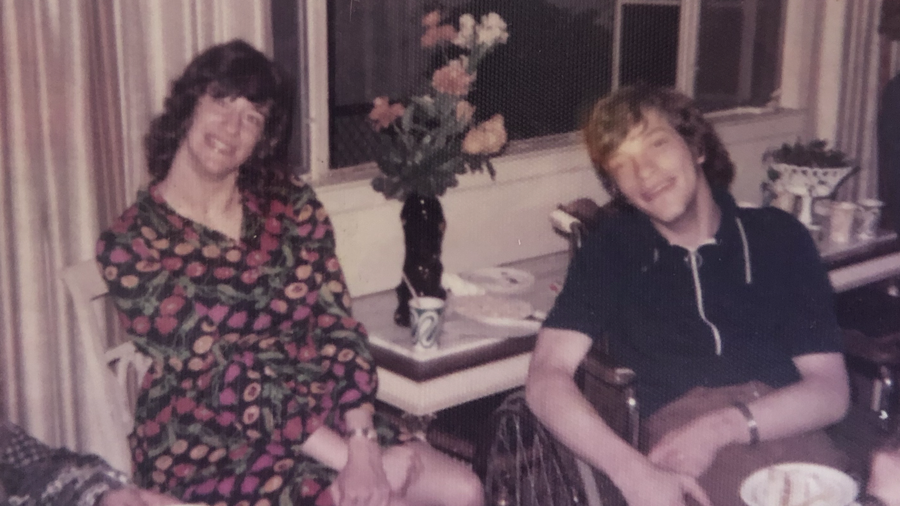 A photo of two campers at Camp Jened in the 1970s (Photo credit: Netflix)

“It’s all Judy [Huemann]’s fault!” filmmaker Jim LeBrecht says when I ask him if Camp Jened inspired a political awakening both in him and his campmates. A new Netflix documentary, Crip Camp: A Disability Revolution, directed by LeBrecht and his long-time creative collaborator Nicole Newnham, resurrects Camp Jened, a summer camp for teenagers with disabilities. One of the camp counselors was the then 23-year-old Judith (Judy) Heumann, who went on to become one of the most prominent American disability rights activists—serving as the Assistant Secretary of the Office of Special Education and Rehabilitative Services and the Special Advisor on Disability Rights for the U.S. State Department under the Clinton and Obama administrations. “It’s one thing to crib and whine about the lack of ramps in the metro stations. But Judy actually went on and sued the New York City Board of Education, and founded Disabled in Action. So yeah, it’s all her fault,” LeBrecht, who attended Camp Jened in 1970 and 1971, explains with a laugh.

A sound designer who was born with spina bifida, LeBrecht was expected to live only a few hours after his birth. Not only did he outlive this expectation, but at age 8, he began attending summer camp. “I call them ‘straight camps,’” he says. “They’d make us sleep in ‘dorms’ and we were put to bed by 8:30 pm. Then someone told me about a camp for disabled teenagers that was run by hippies where you could smoke weed with your counselors and stay up late. I was sold.” That’s how LeBrecht landed at the so-called crip camp. Located in Hunter, New York (just a short distance from Woodstock), and started in the 1950s, Camp Jened was a unique summer camp made specifically for teenagers living with disabilities: some campers had polio, while others had cerebral palsy, mobility issues, and sensory impairments.

“Can you imagine being 15 and trying to hide the fact that you had to wear diapers?” LeBrecht asks. In the film, LeBrecht recalls attending Jened for the first time after having surgery: “In the camp, everyone had something going on with their bodies. It wasn’t a big deal,” he adds. At Jened, teenagers could be teenagers without having to constantly negotiate societal stereotypes and labels imposed upon them because of their disabilities. It was a radical social experiment that emerged out of the radical social movements of the 1960s and ’70s. “We realized the problem did not exist with people with disabilities. The problem existed with people that didn’t have disabilities. It was our problem,” Larry Allison, Camp Jened’s director, says in the film. The camp’s legacy was so impactful that it became the focus of the Netflix documentary, executive produced by Barack and Michelle Obama, Tonia Davis, and Priya Swaminathan.

“Denise [Jacobson] suggested the name for the documentary,” Newnham explained to me. “It was what the insiders called it and since we wanted an inside-out narrative of Camp Jened, we decided to go with the name.” Jacobson, who has cerebral palsy, was one of LeBrecht’s camp mates at Camp Jened. “I wanted to be a part of the world,” LeBrecht said in the film, “but I didn’t see anyone like me in it.” In popular culture, people with disabilities are typically represented in ways that infantilize or demonize them, completely desexualizing them and reducing them to their disability. But Camp Jened was a whole new world for LeBrecht and his fellow campers.

Not only did he enter an environment full of people like him, but he also met counselors who didn’t infantilize teenagers with disabilities but instead, treated them as regular, curious, and hormonal teenagers. LeBrecht met his first girlfriend, Nanci DiAngelo, at Jened, and Denise Sherer met Neil Jacobson, who she later married, at the camp. “One of the women counselors taught me how to kiss. One of the best physical therapies ever!” Jacobson recalls with a chuckle in Crip Camp. “The documentary is everything you’d think it’s not from its name,” Newnham says. “It dispels any mental image that anyone might have of a summer camp full with teenagers with disabilities.” And it does.

There’s a point in the documentary where the campers are separated and quarantined by gender, and mattresses are pulled out of the bunks because some happy camper managed to get crabs. Their faces shine with happiness and pride at having been sexually active, though DiAngelo and LeBrecht were less than thrilled: “I am mad because I can’t see Jimmy and today is our first-week anniversary,” DiAngelo said. Years after attending Camp Jened, Jacobson was in a relationship where she contracted gonorrhea (“For one brief moment, I was so proud of myself,” she said with glee in the film), but the doctors believed that there was no way a person with cerebral palsy would be sexually active and proceeded to remove her perfectly healthy appendix. That’s one of the reasons this portrayal of Camp Jened, with its raucous hormonal teenagers and their affairs, is radical and refreshing.

“Crip Camp” is a political film; it visibilizes the history of one of the most invisibilized communities in this country.

Acting as archivists, LeBrecht and Newnham start the film by digging through old footage of the camp shot by the radical filmmaking group, People’s Video Theater. “I am not sure what they used the footage for, but some of it did make its way to a short cable TV documentary on the crab outbreak. I remember my Dad saying, ‘Jimmy, the crab documentary is on again!’ each time it played,” LeBrecht recalled. It is like unveiling a time capsule and reclaiming a lost time: Lionel Je’ Wayward, a Black counselor from Alabama, wheels a camper around as they play baseball in their wheelchair, LeBrecht takes the videographers on a tour of their camp, Heumann asks campmates about a lasagna dinner, and teens smile wide, realizing the possibility of a life without parental supervision.

In this footage, we also see the beginning of a political awakening in the camp members: A young camper, Steve Hofmann, argues for a disabled person’s right to privacy, while someone else argues that sexism often informs the way that parents treat their disabled children. During the course of archiving this experience, LeBrecht and Newnham soon transformed into activists. “That was always the purpose. I wanted this film to be something like The Times of Harvey Milk (1984) that would completely transform people’s ideas about people with disabilities, their struggles, and their lives,” Newnham said. Though it could have been a simple nostalgic revisiting, Crip Camp instead elects to zoom out and situate Camp Jened in a larger struggle for disability rights.

“It was the 1970s, we were all talking about gay rights, the war on Vietnam, and civil rights,” LeBrecht said. In the film, Wayward noted, “Whatever obstacles there were in my way for being a Black man, the same thing was held true for individuals in wheelchairs.” When LeBrecht attended a protest organized by Disabled in Action in New York City, he literally had to drag himself and his wheelchair, step by step, out of Grand Central Station before he could even get to the protest site. Public spaces were purposefully constructed to keep people with disabilities from accessing them. Segregation was built into the blueprint of this country, and Disabled in Action was trying to change that. 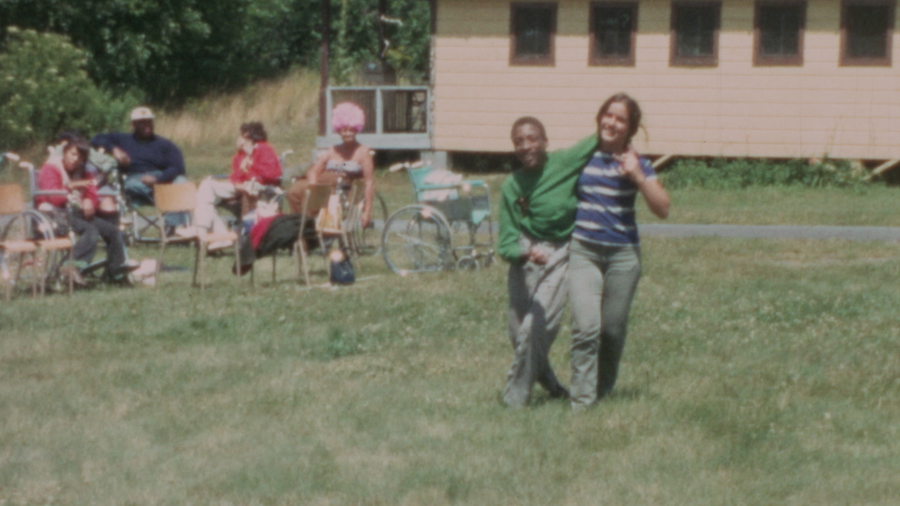 As it pieces together the history of disability rights in the USA, Crip Camp highlights over and over again, how the language of the Civil Rights Movement empowered the voices of disability rights organizations as they defined the language of their protests and demands. Every demonstration became a mini reunion for the Camp Jened campers, showcasing how deeply activism ran within the camp, whether intentionally or as a matter of need: There was no way for a camp seeking to empower disabled teens to not engender activism. When The Rehabilitation Act of 1973 was signed, Section 504, which created and extended civil rights for and to people with disabilities, was left unapproved by the Nixon administration.  Heumann then organized a sit-in protest that ran for nearly a month and drew support from other organizations: The Black Panthers fed the protestors and the Salvation Army provided them with mattresses, while the Glide Memorial Church, the Gay Men’s Butterfly Brigade, Delancey Street, and the United Farm Workers joined the protest in solidarity.

When reflecting on this collaboration, activist Corbett O’Toole commented in the film, “It was camp. Everything we learnt at crip camp is what we did there.” “Let the shameful wall of exclusion finally come tumbling down,” said then President George H.W. Bush when he signed the Americans with Disabilities Act of 1990, but the walls keep going back up. As Crip Camp was being filmed and edited, Donald Trump continued with his consistent efforts to repeal Obamacare and significant parts of the Affordable Care Act. If he succeeds, Medicaid-funded attendant programs, that millions of Americans living with disabilities depend on in their daily lives, will be defunded. His government’s proposed $2.6 billion cut to Social Security disability benefits would require millions of disabled Americans to have their disabilities reapproved by the government, forcing them to navigate America’s wall-high bureaucracy every two years.

There are no human rights without disability rights, and Camp Jened produced many of the feisty activists that took on this fight. Crip Camp is a political film; it visibilizes the history of one of the most invisibilized communities in this country and it insists on being seen authentically amidst a pool of narratives that disenfranchise the voice of people living with disabilities. It reminds us of a past in a way that makes us happy and proud, pairing lighthearted moments with moments of protest, but ultimately, it asks viewers to be angry enough to challenge the hostile governments and structures that make life more difficult for disabled people.

Read this Next: Bending Reality