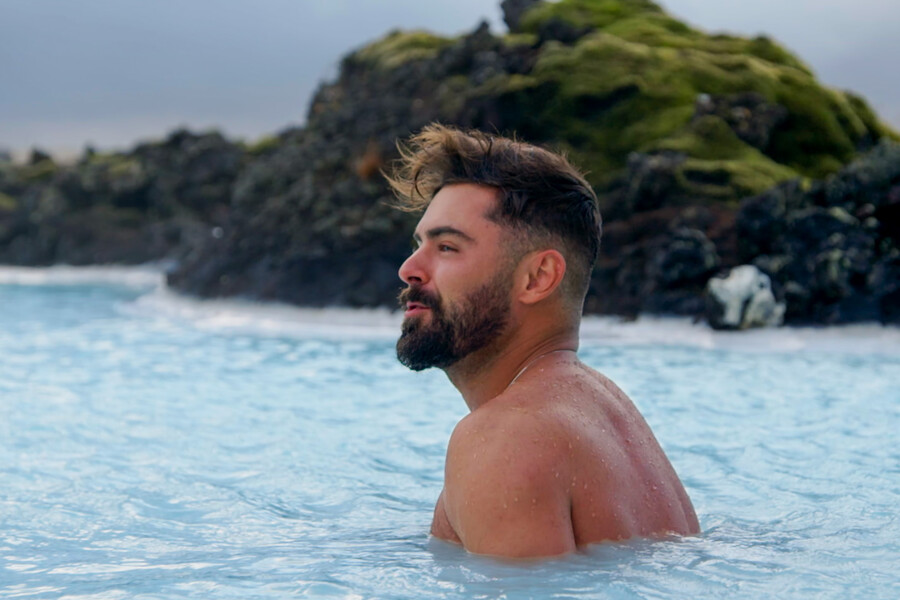 Zac Efron in Down to Earth (Photo credit: Netflix)

Zac Efron’s new show Down to Earth suffers from a genre problem: Straddling wellness, sustainability, travel, and food, Down to Earth tries to argue for the interconnectedness of all these systems, but instead ends up watering each down to trite plot points that serve primarily to facilitate Efron and buddy Darin Olien’s around-the-world adventure with their seemingly all-white crew. As a result, Down to Earth ends up peddling a colonialist fantasy of sustainability and wellness that lands particularly poorly during a pandemic in which millions are facing the dire consequences of what could arguably be described as an apt parallel to the first global-scale climate disaster. As other critics have pointed out, the choice of show hosts itself is decidedly suspect. Efron, whose career spans the High School Musical series, some high profile Hollywood movies, and a fitness channel on YouTube, acts as the nerve center of the show, professing a deep desire to “learn” as his primary credential.

To offset his lack of expertise, “exotic superfood hunter” Olien acts as cohost and companion in bro-ey ribaldry. Together, the two meet “eco-innovators” around the world, starting in Iceland and ending in Iquitos, Peru. Over the course of eight 40-minute episodes, they taste honey from bee farms In London and New York, visit an Ayahuasca foundation in Peru, eat with a U.S. expat community in a Costa Rican forest, meet a “water sommelier” in Los Angeles, and milk goats in Puerto Rico. For Efron and Olien, exotic “experiences” like these are at the heart of both wellness and sustainability. The duo constantly profess their fascination with “Mother Earth,” adopting a well-worn white man’s approach to environmental conquest, and desire to try everything, eat the most exotic foods, and even drink the most exotic waters.

Consequently, wellness and sustainability are framed as personal, bodily experiences that require knowledge acquisition and consumption, rather than community-building and organizing. In this regard, comparisons made to Anthony Bourdain, whose career took off primarily due to his acknowledgement that food is political, feel somewhat off the mark. It’s particularly hard to stomach this navel-gazing approach to wellness and sustainability in a time when celebrity culture is arguably at its most egregious. There’s an undismissable logic to using Efron as a vessel for climate activism: He has a massive following and thanks to his seemingly universal appeal (read: white broness), he can potentially pull in many viewers who would otherwise be uninterested or unwilling to engage with sustainability discourse. There is, however, something particularly thoughtless about a show that disseminates information about sustainability centering a white man with a gaping lack of knowledge of environmental justice.

As the cringeworthy “Imagine” video, Vanessa Hudgens’s dismissal of COVID-19 deaths, and Priyanka Chopra’s clapping into the silence have revealed, celebrities are simply unequipped to look past their privilege and recognize their complicity in a system that, over and over, protects them from the worst kinds of devastation the more marginalized face head on. The show’s almost deliberate avoidance of environmental justice is most clearly on display in the last episode shot in Iquitos. Olien’s house in Malibu burns down in the Woolsey Fire during the shooting of the episode, culminating in him tearfully espousing the need to recognize that climate change is real. In a particularly jarring moment, Olien exclaims, “Hell, we were in Puerto Rico dude; we’re all just as exposed to anything happening at any moment. They’re no different than I am now.”

Equating his loss of property with the destruction of an entire community of already marginalized people’s livelihoods comes a little too easily to Olien, whose entire take on sustainability stems from a desire to preserve “superfoods” for a western audience’s easy access and consumption. This isn’t malicious or deliberate, but neither he nor Efron can get out of their own way to center the communities they claim to want to help because they simply don’t know how to engage with them. Efron, of course, isn’t the first white man to center his own experiences amid marginalized people. There’s a long history of white men trying to “fix” spaces they don’t understand. This is illuminated in the episodes shot in South America, which most reek of colonialist fantasy. The fact that all the “experts” brought on to share their knowledge in Peru and Costa Rica are white and from the United States is a gaping problem that seems to go entirely unaddressed by the hosts and the largely white crew.

Down to Earth would benefit from immersing itself in the ethos of climate justice rather than continuing to gingerly dance around it or ignore it altogether.

Our primary interactions with Indigenous people are shots of them performing service: washing the bodies of white men at the Ayahuasca foundation in Peru and rowing boats to take them to visit the expat community in Costa Rica. The fact that this replicates an uncomfortable colonial relationship—one in which white men hoist the flag of entrepreneurship on the land of the other while exploiting their labor as though that’s all (formerly) colonized peoples are good for—seems lost on the hosts and the crew. The inability to engage with the communities whose lands Efron and Olien visit makes it impossible for the show to ever go as far as espousing real political solutions to climate problems. Framed within the realm of “eco-innovators” and “superfood enthusiasts,” sustainability becomes yet another pursuit for capitalism to dig its claws into and monetize.

When Efron meets Carmen Yulín Cruz, the mayor of San Juan and a very active advocate for the people of Puerto Rico, her incitement to push for real political change and activism is ignored in favor of Efron pondering what to do to help the people of Puerto Rico (she’s telling you, Efron!). In the absence of a real education on environmental justice, Efron falls back on tried and tested celebrity activist hacks like advocating for less single-use plastic consumption and investigating where the food you eat comes from. No one is expecting a show like Down to Earth, hosted by a former tween heartthrob with no relationship to environmental activism and commissioned by a platform beholden to corporate capitalism, to question the powers that be with any real heft. As Laura Bradley writes in a review of the show for the Daily Beast, “If we’re being honest, anyone looking for a Serious Documentary on environmentalism and sustainability would likely pass over anything fronted by Efron anyway.” Yet to let the show off the hook with a pat on the back and an “at least they’re trying” is too easy a cop out.

It is both true that Efron does read as sincerely invested in learning and doing more, and that his efforts mean little when they don’t move the needle beyond the consumer activism that so much of sustainability discourse in the United States is shaped around. By all accounts, there will be a second season of Down to Earth. If there is, Efron has an opportunity to offer a platform to activists and experts who actually represent the bulk of work and the demands of the communities he’s so anxious to learn from. Whether that means adding on a new, ostensibly better informed host, or diversifying their team of “experts,” the show would benefit from immersing itself in the ethos of climate justice rather than continuing to gingerly dance around it or ignore it altogether.

Read this Next: A Ball of Fire 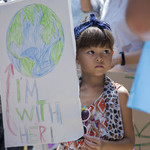 by Evelyn Kronfeld
The young people doing this work are also fighting against the demonization of their activism.