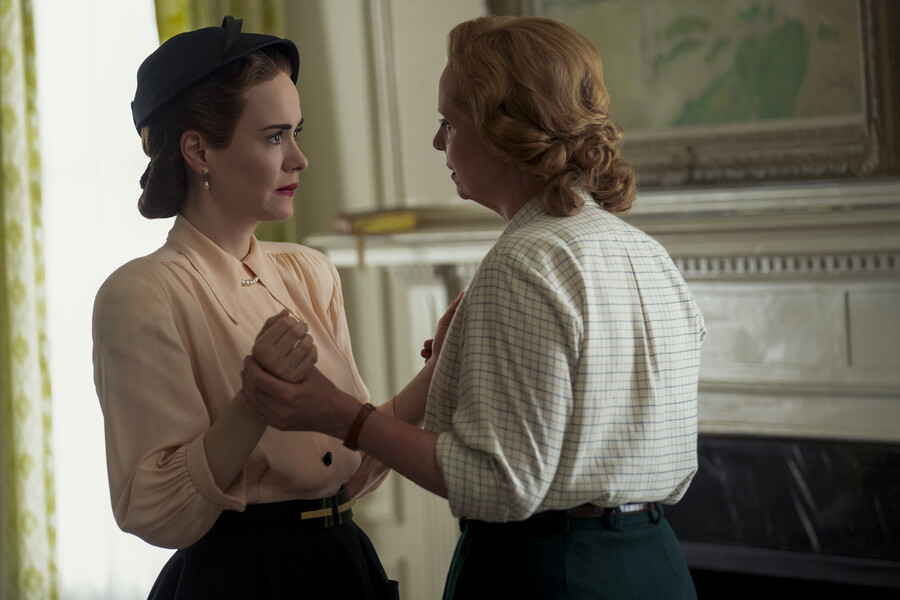 Horror film and show creators have long used mental hospitals and institutions as backdrops for exploring the trauma of institutionalization and incarceration. American Horror Story showrunner Ryan Murphy has made a name for himself in this space, beginning with 2012’s American Horror Story: Asylum and then exploring different aspects of what traditionally scares people—from hauntings and witches to slasher films. AHS Asylum played on the traumatic and terrifying associations that audiences historically have with asylums and mental hospitals, but failed to bring new understanding to these spaces, relying instead on extremely graphic body horror and assault against women and disabled patients to shock its audience. Now, Murphy has moved toward the more subtle psychological horror and medical trauma that still occurs in psychiatric hospitals. As a longtime AHS fan, I was excited about Ratched for a number of reasons, including the fact that it stars a very stylized Sarah Paulson as Nurse Mildred Ratched, the primary antagonist in Ken Kesey’s 1962 novel, One Flew Over the Cuckoo’s Nest, and the Jack Nicholson-helmed film adaptation released in 1975. Murphy and newcomer Evan Romansky’s Netflix original promised to be quite a series given its onscreen roots as well as its desire to explore the horrors taking place in mental institutions in the late 1940s.

In the 1975 film, Nurse Ratched (Louise Fletcher) is the soft-spoken tyrant who antagonizes Randle P. McMurphy (Jack Nicholson) and the other men on the ward she runs at a state mental hospital through subtle manipulation, humiliation, and oppression. The film reveals the real ways that mental hospitals have historically dehumanized and tortured patients through electroshock therapy, lobotomies, and other horrifying treatments. However, it is Nurse Ratched’s passive-aggressive manipulation of the patients that makes her a compelling villain. McMurphy rebels against her authority whenever possible, creating a battle of wills between them and making him the lovable rebel hero of the film (though rewatching the film in 2020 is cringeworthy when you realize that you’re supposed to root for a man convicted of a statutory rape). It is telling that McMurphy doesn’t rebel nearly as much against the male orderlies or the doctor who prescribes his treatment, including the lobotomy he suffers at the end of the film, as he does against Nurse Ratched. To further put questions of power and gender in stark relief, Nurse Ratched is the only woman with any kind of power in the film—even if that power is feminized, pseudomatriarchal, and focused on how women, especially nurses, “care” for others (similar to the way that Annie Wilkes is depicted in Stephen King’s 1987 novel, Misery).

In contrast to the film, the title character in Netflix’s Ratched is domineering and outspoken, which affords her a level of control over how others see her. We see immediately that this isn’t the Nurse Ratched we’re used to. At the beginning of the series, she expertly cons her way into working as a nurse at Lucia State Hospital in Northern California with false credentials and finds herself at odds with head nurse Betsy Bucket (Judy Davis), as there can only be one woman in power at the hospital to carry out the innovative treatments of their leader, Dr. Richard Hanover (Jon Jon Briones). Under his leadership, the staff is focused on how to use cutting-edge “treatments” that could supposedly cure his patients of the mental ailments that plague them. At first, the rivalry between Ratched and Bucket seems like a battle of wills to see who can garner favor with Hanover and garner power to dominate their patients and other staff. Hanover seems to care about his patients, but his care is still rooted in hetero-patriarchal dominance that resembles an “I know what’s best for you” attitude that causes him to attempt violent, dangerous treatments that often go poorly.

He performs both prefrontal and transorbital lobotomies on various patients with little success, but he’s convinced about his own medical breakthroughs (despite past failures). Interestingly, the more that Ratched and Bucket fight for control of the hospital, the more the doctor despises them both—Ratched for her controlling attitude that undermines his authority, and Bucket for her cloying, often simpering deference to his will. But Ratched’s professional motivation is really a smoke screen to obscure her personal goals. Throughout the series, we learn that she doesn’t just want to be head nurse; she wants to rescue her foster brother, Edmund Tolleson (AHS veteran Finn Wittrock), after he’s incarcerated while awaiting trial for torturing and murdering several priests. It was disappointing to see this as the driving force behind her work, and it’s difficult to accept this depiction of her character as an origin story. If anything, the link between the two muddles a more interesting storyline that arises as Ratched realizes the cruelty and indifference she is capable of and how her actions could land her in the place where she works. Protecting Tolleson is a move that softens her, relying on her maternal instinct and drive to protect, which is at odds with her desire to callously aid in violence against other men who stand in her way.

The tone of the series shifts in the second episode when Ratched meets Gwendolyn Briggs (Cynthia Nixon), the press secretary for California Governor Wilburn (Vincent D’Onofrio). Their connection—and mutual attraction—is immediate. Wilburn is the quintessential domineering, sexist politician who frequently hits on Briggs in front of others. At first, Ratched pursues contact with Briggs to gain leverage with the governor (and ultimately save her brother), but Briggs’s interest in her and the tenderness she shows her takes Ratched by surprise. As Briggs grapples with Ratched’s reticence to engage in a relationship with her and begins recognizing Ratched’s ability to be cruel, she fights her attraction for Ratched, saying, “I wish that I got to meet Mildred Ratched before the world got to her. Before somebody convinced her that the only way to survive is to build a wall around herself and never let anybody in, ever.” It is clear that Ratched is wounded and only another queer woman who sees her true self can recognize that trauma without needing an explanation. The focused queerness buoys the series.

The show and Ratched’s character feel the most authentic when the two women are sharing time together. When Ratched is with Briggs, she learns of other queer women and of those who are unafraid of expressing their sexuality. When Briggs invites Ratched to an underground lesbian bar, Ratched storms out and asks bluntly, “Why did you bring me here?” Briggs responds, “I thought you were one of us.” While Ratched is not ready to accept her own queerness at this point, especially not publicly, she is forever changed by this moment. Her reticence to explore her sexuality is justified by the very real danger of being a queer woman during this time period. Later, when Hanover instructs Bucket to try a procedure meant to “fix” a lesbian patient, Ratched has to assist Bucket and gentlehearted orderly Huck Finnigan (Charlie Carver) in a violent conversion therapy using hot and cold water treatments. For the first time, she is horrified: Instead of a Ratched who stares avidly as patients experience violent and invasive lobotomies, this Ratched experiences pain and empathy.

Nurse Ratched’s newly realized queerness pushes her to recognize the violence of her workplace and perhaps her complicity in it.

Here, we find Ratched’s humanity: She sees herself in the woman and she can see that this is wrong. This widens her lens beyond the space she works within, and she comes to see the larger impact of such so-called cures. Her newly realized queerness pushes her to recognize the violence of her workplace and perhaps her complicity in it. In a subsequent episode, we see this switch portrayed onscreen. Ratched assists Finnigan in sabotaging the treatment tubs; when that doesn’t work, she helps him rescue the two lesbians from the hospital so that they can be together. As they drive off together, Finnigan turns to Ratched and calls her an “angel of mercy.” The comment is reminiscent of Florence Nightingale and the image of the compassionate savior nurse, which is at odds with her time in the war, where she regularly euthanized injured soldiers who begged her to take their pain away. This gentle, benevolent type of care is expected of her as a woman and a nurse, but it’s only when she recognizes herself in these women that she’s able to see their humanity and her own. Thanks to this realization, Ratched is finally able to admit her feelings for Briggs at the restaurant where they first dined together.

“I do have feelings for you, although I don’t entirely understand them,” Ratched tells her. “So I need to do this my own way.” She even invites Briggs to the dance she is organizing at the hospital for their first official date. After Tolleson shoots Briggs at the dance during a botched escape, Ratched realizes all that she had to lose. She is eventually able to share the details of her past with Briggs and the vile history of abuse that both she and her brother experienced as foster children. She has never shared this information, but her burgeoning relationship with Briggs allows her to tap into true care and vulnerability with someone who doesn’t want to harm her or use her. Rather than centering violence in her life as a means to an end, Ratched is finally able to find and harbor love instead. Paulson told reporters at a press conference that her character having to operate within the hetero-patriarchal system of the mental hospital prevented her from accessing her own compassion, which is coded as feminine, in her work. “Could it be considered that she didn’t have any choice about whether or not she could access her heart in her work, if she could bring her femininity and her womanhood to the job?” Paulson suggested.

It seems that Paulson’s describing the queering of medical and mental healthcare. “‘Queering,’ in this context, means to look at the field of psychology, common terms, definitions, and concepts through the lens of queerness—outside the framework of heteronormativity, which is the cultural assumption that heterosexuality is the norm and that everyone fits the gender binary,” clinician Whit Easton wrote in a February 2020 article for Psychology Today. Here, the idea of “queering” psychological care is meant to undermine the oppression of the hetero-patriarchal treatments that we see Dr. Hanover use on his patients that is inherently dehumanizing. Easton recognizes that the psychological community has a contentious and harmful history with LGBTQ patients and, by demeaning or failing to recognize a patient’s sexuality or gender identity, has often caused further harm in clinical settings by exacerbating mental-health struggles and trauma. According to Easton, a queering of psychological treatment would mean finding a kind of care rooted in radical self-acceptance of sexualities and genders that lie outside of the cis/heterosexual binary.

This is something that modern psychologists and therapists still struggle to provide, but it is one element being explored in Ratched that resonates. While much of the series struggles with too many plotlines and Ratched’s motivations often feel inconsistent, there are moments of genuine examination of how radical self-acceptance can help to heal trauma. By the end of the first season, Ratched and Briggs are in a relationship and united together against Tolleson, who is bent on attacking Ratched for trying to euthanize him in an attempt to save him from a violent execution. The series has been renewed for a second season, and while it’s clear that Ratched’s violence will continue, especially to protect the life she now has with Briggs, it will be interesting to see how queer women in the series join together to fight for their humanity.