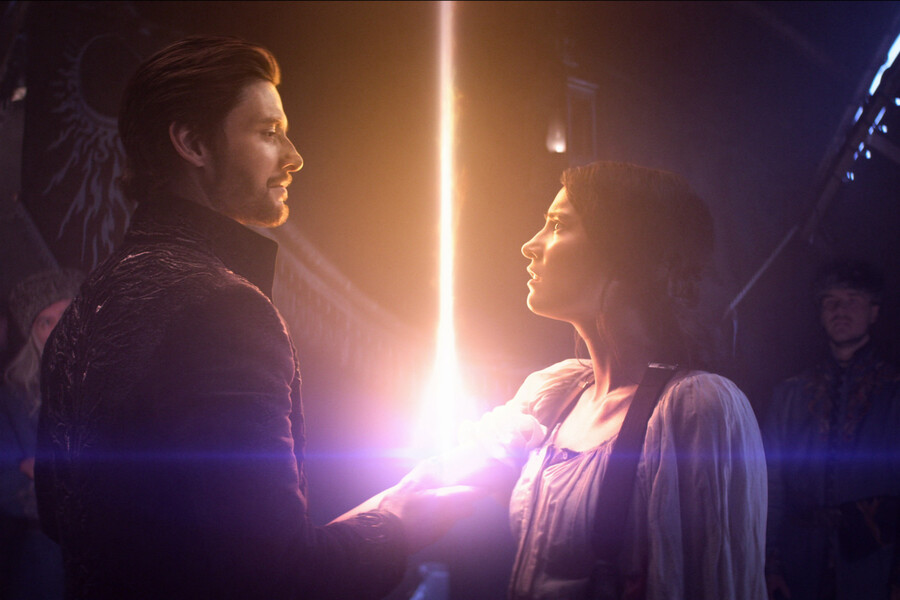 Ben Barnes as The Darkling/General Kirigan and Jessie Mei Li as Alina Starkov in Shadow and Bone (Photo credit: Netflix)

“The more I travel, the more I learn that where you are doesn’t matter nearly as much as who you’re with,” says sharpshooter Jesper Fahey (Kit Young), one of the major characters in Netflix’s Shadow and Bone, as he flirts with a teen stablehand at the Little Palace. The show, adapted from Leigh Bardugo’s Grishaverse series of young-adult fantasy novels, takes place primarily in parts of Ravka and Ketterdam. Jesper is indigenous to Novyi Zem, a fictional world modeled after Australia and the United States, and he’s both dark-skinned and proudly queer, making time for a hook-up with the stablehand in the middle of a planned heist. The series’ characters are pulled from both the Shadow and Bone trilogy and the Six of Crows duology, and its first season course corrects a shortcoming of the trilogy that Bardugo acknowledged in a 2016 interview: “My first book, Shadow and Bone, is a very straight, very white book, and I think that’s because I was a new author echoing a lot of the fantasy I’d read.” The Six of Crows duology introduced well-developed disabled, LGBTQ, and characters of color in its main cast, and the Netflix adaptation goes a step further by changing the backstories of existing characters and introducing aspects of their identities more prominently and much earlier.

In the Netflix adaptation, Alina Starkov (Jessie Mei Li), the Sun Summoner and protagonist of the Shadow and Bone series, is mixed-race—Ravkan and Shu—while in the book series she’s only Ravkan. (Shu Han is Chinese- and Mongolian-inspired, while Ravka is loosely based on Tsarist Russia.) Alina grew up at an orphanage in the town of Keramzin, where she and her best friend Malyen ‘Mal’ Oretsev (Archie Renaux), who is also mixed-race, were viewed as outsiders by their white Ravkan peers. Mal and Alina develop such a close bond that they decide to hide from Grisha testing, a mandatory process designed to identify those with magical abilities and draft them train at the Little Palace with General Kirigan’s Second Army. Alina and Mal are subjected to racism and xenophobia, amplified by the fact that Ravka is at war with Shu Han, as spotlighted in a moment where a merchant tells Alina they don’t “take Shu coin,” assuming she’s from Shu Han based on her appearance.

This addition to Alina and Mal’s backstories provides a richer experience for the viewer. Rather than coming across as colorblind casting or colorbaiting, viewers understand that Mal and Alina’s identities have a profound impact on how they experience the world. As a girl of color, it makes even more sense why young Alina shies away from being tested and exposed as a Grisha; she’s spent her childhood being othered for who she is and only feels truly safe with Mal. The depth of their bond feels similarly earned and the opportunity to see the plot from Mal’s perspective gives the viewer insight missing from the trilogy’s first book, in which Alina believes, mistakenly, that Mal has abandoned their friendship when she goes to train at the Little Palace. Alina asserts her pride in her Shu heritage in a powerful scene at the Little Palace with Grisha Tailor Genya, who’s gifted with the magical ability to transform people’s physical features. As Genya adapts Alina’s features to give her glittering makeup, Alina requests that she not change the shape of her eyes, anticipating that like other Ravkans, Genya might assume Alina wants to hide that she’s Shu. Despite the racism she faces, Alina is proud to be Shu, and the moment spotlights her pride in her identity.

The first season of Shadow and Bone also dives into Jesper’s queerness earlier than the Six of Crows duology did, in his conversations with spy Inej Ghafa (Amita Suman) and his hookup at the Little Palace. In the book series, Jesper’s sexuality is introduced later and his subsequent romantic relationship with Wylan Van Eck is treated with the same weight and respect as the straight romances. While the books take place in Ketterdam, the Netflix series sees Kaz, Inej, and Jesper traveling to Ravka. Readers of the series know that homophobia isn’t present, or is at least uncommon, in Ketterdam, but in the series, we understand this is true of Ravka as well, which was not explored in depth in Bardugo’s books. There’s no need for Jesper to come out in the Shadow and Bone Netflix series; instead, he discusses checking out boys with Inej and pursues one in a scene that’s fun and satisfying to watch. We’re set up for his potential sexual and romantic encounters later in the series, whether with Wylan (who isn’t introduced in Season 1) or others. In the books, Jesper mentions dating both men and women, and while the Netflix series doesn’t explicitly label him, I’m excited to see whether Season 2 further explores Jesper’s queerness.

Joy is hard-won, and every battle has higher stakes—no mourners, no funerals, as the Crows say.

Disability was always at the forefront of the Six of Crows duology, primarily with protagonist Kaz Brekker (Freddy Carter). The show doesn’t explain the backstory behind Kaz’s disability, but his character walks with a limp and is rarely seen without his cane, which is crowned with a crow skull and both signifies Kaz’s power and serves as an asset in physical brawls. It’s meaningful that in a fantasy world where Grisha healers exist, Kaz chooses not to to heal, diminish, or hide his disability. The cane is, key to his identity as an antihero, letting viewers empathize with the difficult, often immoral decisions makes in the name of his own survival and the protection of those he cares about. And the pride he takes in his in his cane sends the distinct message that disability does not make someone less—not less feared, not less powerful, and not in any way less capable.

Other characters’ disabilities are less present than Kaz’s, but the plots set the stage for deeper development later. Jesper, for instance, struggles with a gambling addiction, unable to keep to a simple mission without taking a detour to gamble away some of his money. And Inej’s trauma is at the forefront throughout the season: She was captured by slavers when she was 14, separated from her younger brother, and sold into sex work where Kaz eventually bought her freedom so she could spy for him. Inej is driven by the aftermath of the trauma she experienced—she’s still looking for her brother and misses no opportunity to turn in slavers—but it doesn’t define her. Instead, her most notable characteristic is a dedication to morality and faith; each of her knives are named for the saints she prays to, and she believes Alina is not only the Sun Summoner but another  destined for greatness. Inej holds constant in her beliefs under immense pressure, offering a calming, steadying presence to Kaz, who is always trying to think of the logical next step in every scheme.

One of the stark differences between the original Shadow and Bone and Six of Crows series is that one follows a traditional fantasy narrative of a Chosen One and the other centers protagonists who are seen as outcasts and outsiders. The Netflix adaptation primarily follows the latter thread by redefining Alina and Mal as characters who have always been outsiders and will likely continue to be viewed as outsiders by some even though Alina’s fate as the Sun Summoner has been revealed. These intentional choices serve to weave a story filled with lovable, endearing main characters who have engaging arcs. Joy is hard-won, and every battle has higher stakes—no mourners, no funerals, as the Crows say. The characters feel like a chosen family who are just starting to come together, and I can’t wait to see how those relationships continue in future seasons.

Read this Next: Everything Must Die 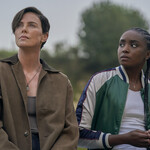