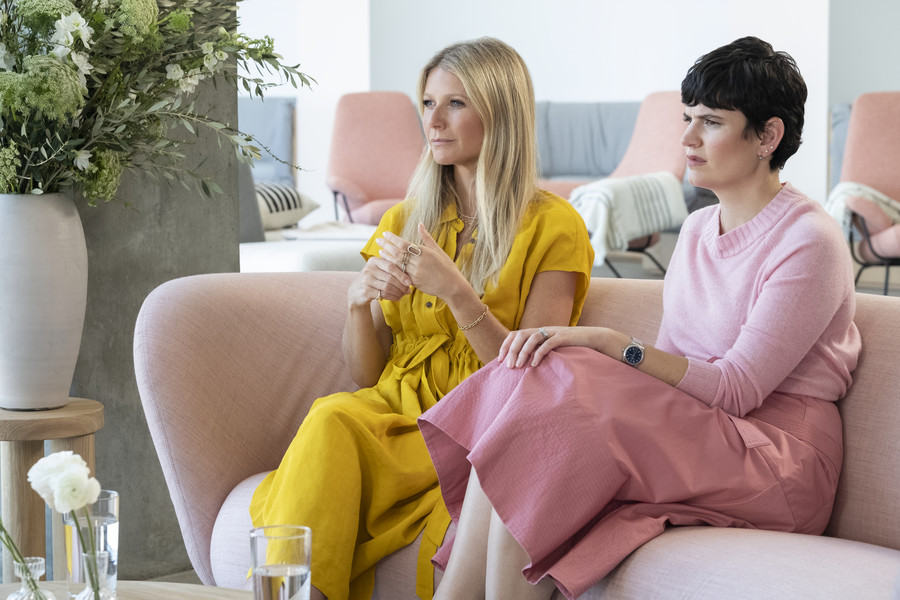 Introducing her new Netflix series, The Goop Lab, Gwyneth Paltrow explains that Goop, the lifestyle brand she founded in 2008, is laddering up to one thing—namely, what she calls the “optimization of self.” She defines the phrase, saying, “We’re here one time, one life, like, how can we really like milk the shit out of this?” The structure of the show is such that Paltrow, the face of Goop, and Elise Loehnen, Goop’s chief content officer and cohost of the Goop podcast, discuss wellness, mental health, and all things Goop-y. The camera flits between Paltrow and Loehnen sitting in the office and having discussions about depression, anxiety, trauma, and vaginal health with various experts and members of the Goop team (called goopers), a team made up very thin, very stylish people of a wide range of genders and races. The message is that everyone at Goop is out in the world every day, experiencing wellness and attempting to both bond with one another and fix themselves.

The six-episode mini-series kicks off on a memorable note: In “The Healing Trip,” Paltrow’s team is offered the chance to travel to Jamaica to try mushrooms and heal together. They lie on patterned mats on the floor; a lot of white people hug and cry and deal with deep, traumatizing emotions. One jokes, “Someone put a heart monitor on me!” laughing in a way that seems as terrified as it is inspired. As the retreat wraps up, Loehnen tells the camera, “This is not a typical workspace experience, although I kind of wonder if it wouldn’t be incredibly therapeutic for workspace teams if you felt really safe and wanted to become even more intimate and connected with the people that you spend the majority of your day with.” Encouraging coworkers not only to do drugs together, but to explore trauma en masse seems like an HR disaster waiting to happen. But in the world (or, rather, the career) of Goop, it’s just another day at the office.

Likewise, watching the Goop team in the second episode, “Cold Comfort,” “learn to breathe” felt like watching a very quiet, very gentle hazing. (“It was basically all of the symptoms of a panic attack,” one female participant says.) The team does “snowga” together, a practice that basically involves a group of skinny, beautiful people standing in the snow in bathing suits and bare feet and doing yoga, their arms swaying from side to side before their bodies pivot into warrior pose. The fact that Goop’s leadership views these exercises as a fun bonding activity points to a position that’s increasingly expressed by business experts but ignored by company leaders: Give your workers benefits and good salaries, and let them do their jobs. An April 2019 article in Fast Company asserts that “Companies offer all sorts of benefits and extras to attract the most favored workers, from healthcare and stock options to free food. But all those perks come at a price: your freedom.”

It seems warped to willfully ignore the massive power imbalance at hand when you “invite” the people who work below you to do something intimate, like brunch at your house or any of the other fun perks (but not benefits) media companies like to shill, let alone to a company retreat involving snow yoga or crying about trauma that’s entirely based in the mission of your company. Enough workers, women in particular, worry about not seeming like team players; let’s not encourage the idea that coworkers aren’t sufficiently team-oriented unless they’re willing to dive into deep trauma together. Admittedly, I tuned in to Goop Lab with a massive bias. Though I myself have been sucked into the world of “cool-girl” products with a gorgeous Instagram feed, I’ve been increasingly frustrated in the last few years by the marketing of self-care and the language of body-positivity, self-love, and empowerment.

As Anna Borges, author of The More or Less Definitive Guide to Self-Care, told Bitch in a November 2019 interview, “[S]elf-care is now associated with consumer culture and capitalism, which can happen with anything: something becomes part of a cultural conversation, and brands are like, how do we turn this into money?” The aggressive reliance on choice feminism as a means of luring consumers is one that takes the age-old marketing language of “Women, you suck, but this miracle product will fix you” and makes it even worse, because the mission statements of brands like goop allows them to uptick the price. You probably have a dollar amount you’d be willing to pay for a face mask or a candle, but that price might rise little‚—or a lot—if that face mask or candle can cure feelings of self-hate, frustration with your appearance or how you’re perceived in the world, or help you feel empowered enough to finally ask for that raise.

Goop’s newsletter heralds itself as “Inbox sage for the digital age,” despite the fact that saging is an important practice in Native American and other Indigenous culture—one that’s been so overwhelmingly appropriated that sage itself is now running out. As writer and activist Taté Walker told Fashionista in November 2019, “Commodifying sage has led to overharvesting and shortages of the plant.” The most expensive product sold in the beauty section of Goop is the ZIIP Ox + Crystal Gel Kit, a $480 product; the copy reads, “This nanocurrent device plus clean conductive gel is aimed at stimulating collagen for instant sculpting and glow boosting.” It also reads as a scam—and it’s one of the most profitable around, reportedly valued at around $250 million. As a business, Goop knows what it’s doing: Tell people you won’t just make them better, you’ll heal them, make them feel love, make them feel fixed, and you can’t fail—especially not with celebrity backing (something we’ve also seen with poosh, Kourtney Kardashian’s Goop knockoff). 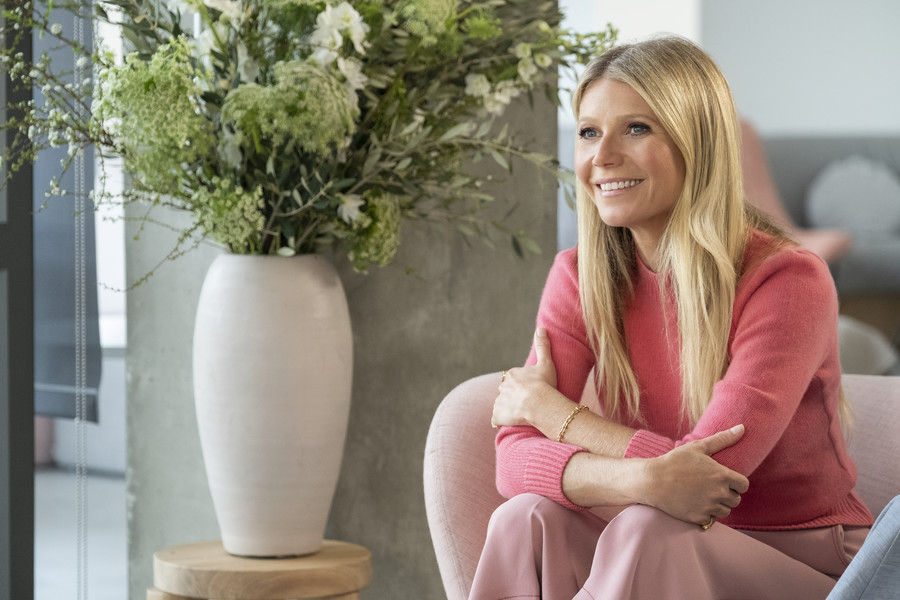 There are small, strange moments of beauty to be found in The Goop Lab—but they are only new in their shiny, glammed-up marketing, in our everyday lives and in pop culture. In the third episode, “The Pleasure Is Ours,” a woman (who doesn’t work for Goop) explains how she came to love and respect her own sexuality by way of her own vulva, lying on her back on the floor as sex educator Betty Dodson guides her to sit with her legs spread and a mirror between them. Such practices are not new; Dodson, for instance, has been teaching women to understand and embrace their genitals for nearly 50 years. What makes them palatable not just to a mainstream audience, but to Goop’s specific audience—white, slim, wealthy “cool girls”—is that these methods come into their world through Paltrow’s well-branded, well-marketed persona. She is one of them, and so they trust her.

There’s an earnestness to The Goop Lab. A non-gooper guest on the show is a veteran with PTSD who tries MDMA therapy; a young woman on Paltrow’s team sobs as she feels a sense of release following the loss of her dad; a Black woman explains that, as a woman of color, it’s been hard for her to face “emotional pain,” so she began microdosing mushrooms when her therapy wasn’t taking her far enough into a healing process. These are people who are hurting and who need support. The American healthcare system isn’t working for them—it’s unclear, it’s difficult to navigate, and, for many of us, getting sick or breaking a bone means risking a fall into extreme, inescapable debt. My frustration is not with people who turn to Goop for help, but rather with the way Goop takes advantage of these fears and uses pricey wellness interventions to turn a profit and maintain a sense of exclusivity and sparkle.

Paltrow is a smart woman, and she hears and sees the criticism of the Goop brand and the company she’s built. Throughout the series, she asserts that she knows people judge her and believe that she can’t imagine real pain or need. She pushes back, saying she’s experienced trauma in childhood and throughout her life, and that the drive to critique Goop and Paltrow specifically shows a lack of human connection. It’s hard to disagree: Being white or rich or beautiful in a way that’s profitable doesn’t mean one can’t experience trauma or desire a community filled with the kind of love and support Paltrow wants to cultivate and showcase in this miniseries. But Goop is a business, not an individual, and it’s deserving of criticism even when it’s harsh.

If Goop had remained an expensive, digital-first brand, I wouldn’t complain. If its desire to peddle wellness involved products that were both more affordable and didn’t make the kind of sweeping claims that have resulted in a settlement over false claims; if it didn’t traffic in endless criticism of pharmaceuticals by, say, suggesting that doing yoga in the ocean can cure illness or that breathing to a specific beat can defeat anxiety, I would complain less. If Paltrow had made herself merely a conduit for alternative therapies and used her privilege to help the people and cultures behind them gain validity and legality, that would be very different; if she simply wanted to sell overpriced, vagina-scented candles for fun, without claiming that such products are curative, I’d probably buy one myself. Ultimately, though, Goop has no intention of pulling back on its claims or bending to any criticism at all. It seems that the flattening and appropriation of self-care isn’t going to end any time soon—if this Netflix series is anything to go by, it’s just getting started. 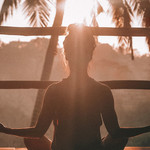