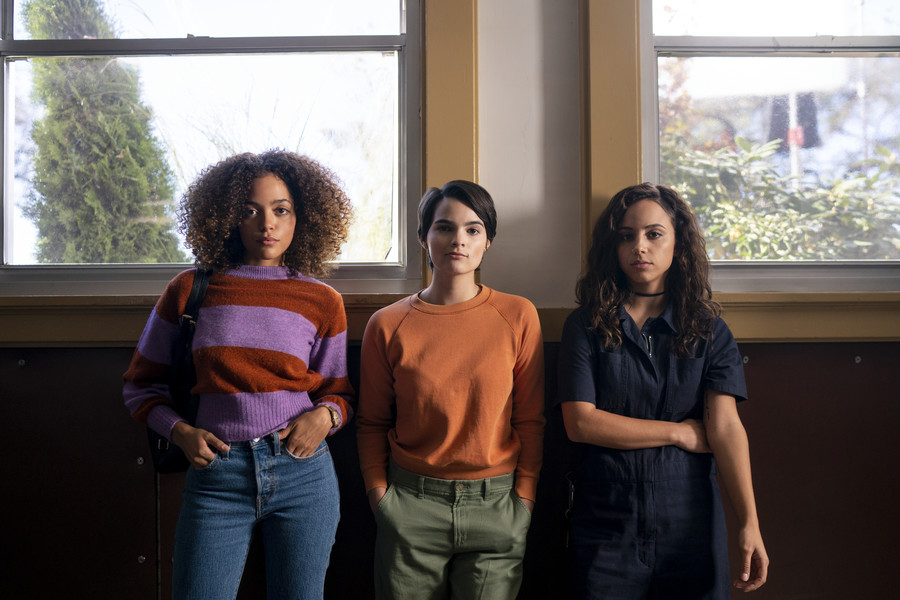 White teen girls who behave badly as a form of self-discovery feel like a stereotype:  TV shows and movies like Booksmart, Girls, Gossip Girl, and The O.C. are often criticized for focusing on white girls who face few consequences for their immense mistakes—a freedom rarely given to queer girls and girls of color. White girls who smoke weed in college are artists going through a phase while Black girls who smoke weed in college are risking their entire lives being marred. In many ways, queer teens are always on the brink of fear. But on Netflix’s Trinkets, white teens aren’t the only ones who get to safely make mistakes.

Elodie (Brianna Hildebrand), Tabitha (Quintessa Swindell), and Moe (Kiana Madeira), a trio of high-school girls who meet in Shoplifters Anonymous, aren’t prototypical “good girls”: They steal, experiment with drugs, lie to their well-meaning parents, and drive a stolen car into a lake. While high, they even get matching small black triangles tattooed on their wrists. While their behavior ventures beyond the bounds of normal teenage antics, Elodie, Tabitha, and Moe aren’t “bad girls” either. They’re often stealing to feel a miniscule sense of power in a world that devalues and overlooks them. Elodie only tries Molly at a party to get the courage to pursue her first queer relationship; Moe lies about being accepted into a program abroad because she feels bad for leaving her single mom alone; and, together, they steal and destroy Tabitha’s abusive boyfriend’s car. Their experiences feel more like Booksmart and less like shows like All American and On My Block, two of the few current teen shows primarily featuring characters of color, as, on Trinkets, the stakes are much lower considering the scope of their crimes.

Trinkets doesn’t offer a nervous, judgmental look at three messy teenagers or let them off the hook, but it does explore how two teens of color (Moe and Tabitha) and one queer teen (Elodie) build their identities on their own terms. The show is less interested in deciding if Elodie, Tabitha, and Moe are bad or good, and more interested in allowing them the space to figure out their moral aptitudes. Whiles shows like Degrassi: The Next Generation, Skins, Grown-Ish, and Good Trouble can sometimes feel heavy-handed— and clearly like adults writing young women behaving badly—Trinkets has sympathy for its main characters. Each of their behaviors are justified, and when they’re cruel to their parents, to other people, or to themselves, they’re eventually forgiven.

A main reason for this constant feeling of forgiveness is the ease by which the young women forgive each other. Instead of punishing each other at-length for their lies, they always come around, and instead of judging each other for their main “flaw,” stealing is something they egg on and encourage because they know it’s what they need to feel a little better, even it’s a temporary moment of relief. Stealing a leather jacket and gifting it to a friend is given the same level of stress as failing a test or skipping a class. The show keeps these moments light by maintaining the perspective of each girl rather than giving the parents ample screen-time (like Riverdale) and letting them share their most authentic selves in Shoplifters Anonymous. Trinkets isn’t recommending that its teen viewers also kick off a life of crime; instead, its allowing these women a messy humanity typically reserved for white men. Their value is in their humor, their intelligence, and their skills—even if that skill happens to be shoplifting.

In an early episode, Moe, the only one of the women in a relationship where she’s respected, encourages Tabitha and Elodie steal vibrators. They’re not phallic vibrators (I immediately recognized it as the LELO Sona) and they allow each girl to mature in her own way.

On Netflix’s Trinkets, white teens aren’t the only ones who get to safely make mistakes.

Tabitha, a Black woman dating a white boy, uses the stolen vibrator to broach a difficult conversation with her abusive boyfriend. Though she’s not yet ready to end the relationship, she’s struggled to come to terms with his abuse. We see this in the first episode, where, prior to becoming friends or really knowing each other at all, new-girl Elodie crashes a party where she knows no one and accidentally sees Tabitha’s boyfriend grabbing her arm. Instead of being glad for the ally, Tabitha is clearly upset that someone saw a flaw in her life, and in her relationship. In the third episode, Tabitha, having stolen the vibrator, uses the pink toy as an offering to her boyfriend, saying she’s heard that it could help them have even better sex. What for Elodie was a moment of freedom is a moment of pain for Tabitha. Her boyfriend immediately gets offended, responds with aggression, and makes it clear that he’s not invested in her pleasure. His reaction helps Tabitha realize that his temper—and the fact that his anger is  often directed at her—is out of control and that he doesn’t intend to change, and by the end of the season, she decides to leave him.

What happens when teens who aren’t straight or white take something that doesn’t belong to them? While Tabitha and Elodie are have certain class markers that insulate them from consequences, Moe has a single mother and doesn’t live in a large house like her friends. Still, they’re at greater risk than resident white, blond, and extremely feminine “mean girls.” And yet, they aren’t arrested (at least, not in this season), and even the worst punishments are escapable. In a world where marginalized teens are attacked in public, sent to conversion therapy, and shot in broad daylight, Trinkets creates space for teens to learn and grow from their mistakes instead of dying from them.

Read this Next: Only White Kids Find Treasure 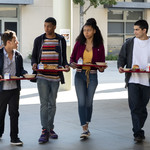 by Rubén Angel
None of the kids have delusions of grandeur; all they want is to buy their way out of historical cycles of violence.