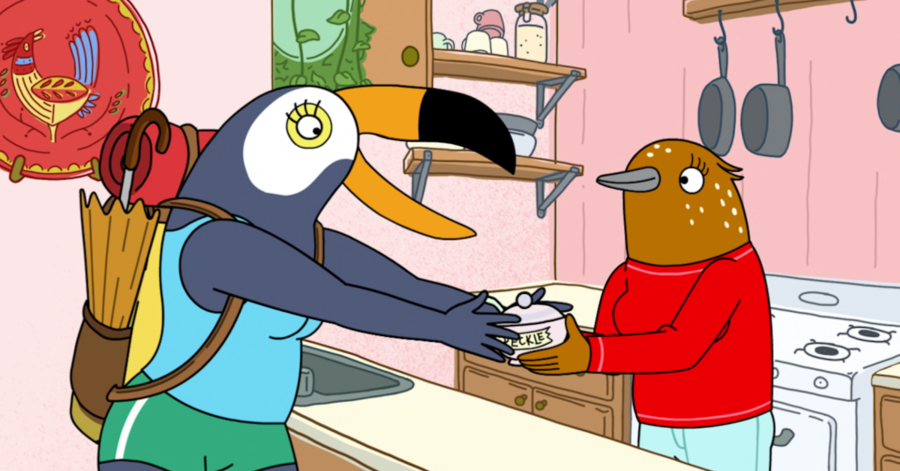 Tuca & Bertie, an animated Netflix series starring Tiffany Haddish (as Tuca) and Ali Wong (as Bertie), premiered in May 2019 and offered a unique and invaluable road map for survivors of trauma. Created by veteran illustrator Lisa Hanawalt, the series follows the zany adventures of Tuca and Bertie, best friends and former roommates who are navigating the hustle and bustle of Bird Town. While the show is light and comical, featuring meat drawers, edible grandmas, and runaway boobs, it’s ultimately an ode to female friendship, healing, and survival.

Though Tuca & Bertie’s a cartoon whose central characters are birds, its uniquely human storylines ask questions about our roles as friends, women, and people. Being animated allows the series to delve into heavy topics—such as addiction, mental illness, and sexual assault—while crafting space for viewers to watch with a sense of levity rarely found in live-action series that explore similar topics, such as Shameless, Jessica Jones, and Orange Is the New Black. And yet, after striking such an important chord with viewers, Netflix has decided to cancel the series after just one season. Canceling the show before it hit its stride silences an important narrative about women’s healing and survival.

The trauma and pain that each protagonist carried is familiar for women: Tuca, a kooky toucan who’s always cracking a joke or engaging in physical comedy, is sunnier than Bertie, but she’s also battling alcoholism and the lasting impact of intergenerational dysfunction on her mental and emotional health. Her humor helps her mask serious, but it’s clear that Tuca is dealing with a lot, including the death of her mother and the lack of a support system. Aside from Bertie, Tuca doesn’t have loved ones who she can rely on; Aunt Tallulah (voiced by Jenifer Lewis), the one family member we’re introduced to, is verbally abusive to Tuca, calling her a “loser” and proclaiming that “everyone will leave [her] in the end.” Tuca also struggles to maintain her sobriety throughout the series, and her instability makes it difficult for her to forge meaningful relationships or hold down a job, leaving her financially dependent on Bertie and her abusive aunt. Tuca’s growth over the first season affirms that being a responsible adult and owning up to past mistakes is not always glamorous or fun. So feels even more big, powerful, and triumphant when she rips up a check from her abusive aunt and vows to make ends meet on her own.

Tuca & Bertie doesn’t shy away from showing the consequences that come with the choices we make: While Tuca’s alcoholism risks her financial independence, Bertie’s trauma causes her to develop trust issues in her platonic and romantic relationships with men. Bertie is in dysfunctional relationships with almost every male character on the show. Pastry Pete (voiced by Reggie Watts), Bertie’s boss at her dream part-time gig at a local bakery, arguably presents her with her biggest set of challenges. In “Plumage,” Bertie begins her apprenticeship at the bakery, and on her very first day, Pete forcibly holds her head extremely close to a burning pot, insisting that Bertie “smell” and “feel” the food boiling inside. Bertie is clearly uncomfortable; she tells Pastry Pete that she’ll be right back, heads to the bathroom, and furiously masturbates. Bertie’s reaction to Pete’s abuse of power illustrates the nonlinear path to healing, as one might not expect seeking pleasure to be a natural response to a violent moment.

It’s clear that Bertie is struggling to sort out her feelings about male authority figures, which is exemplified in another episode when Bertie politely asks her longtime boyfriend, Speckle (voiced by Steven Yeun), to order her around in bed. This exchange embodies one of the show’s greatest strengths: showing viewers the truth, even when it’s confusing or uncomfortable. Tuca & Bertie’s depiction of female survival is refreshing because it focuses so intensely on healing and growth. Both Tuca and Bertie are facing their demons, confronting past traumas on their own time, and leaning on each other and other women to help them heal. Tuca and Bertie act as the other’s support system, aiding each other in their quest to become better and more whole versions of themselves.

In “The Promotion,” Tuca helps a shy and unconfident Bertie ask for a promotion at a job where she’s being sexually harassed by a male coworker. In “The Deli Guy,” Bertie helps Tuca ask a cute delivery boy out after Tuca admits that she’s never gone on a date while sober. It’s not that men’s stories don’t matter in Tuca & Bertie, but the plot lines involving the male characters—such as Speckle’s job as an architect or his anxieties over consuming his dead grandma—are totally separate from the female protagonists’ journeys of personal growth. And existing on their own—apart from the men in their lives—makes Tuca and Bertie’s stories even more powerful.

For fellow survivors, Tuca & Bertie provides a model of hope and suggests that no matter what pain we have endured or are going through, love and community can help us heal.

While the show takes both protagonists on a journey of personal growth and self-reflection, Bertie’s healing storyline is perhaps more surprising. The character’s mistrust of men is teased throughout the series—as seen in her uncomfortable relationship with her boss, her inability to tell off an exploitative male coworker, and even her lack of trust in Speckle. However, viewers are not given a proper backstory until the series’ penultimate episode “The Jelly Lakes” when Bertie revisits the island where she spent her childhood summers. That’s when the lingering impact of the sexual assault she experienced at the age of 12 comes to light: “I trusted him,” Bertie sobs to Tuca. “I thought I was special.” It’s presumably her first time discussing the sexual violence. Tuca enfolds her best friend in a tight embrace. “You’re so brave to tell me this,” she says. “This is what dealing with your shit looks like.”

In another beautiful scene, Bertie floats to the bottom of the lake to find her 12-year-old self cowering there—alone and ashamed. Bertie gives her younger self a hug and the two swim back to shore together. Later, Bertie admits to Tuca, “I’ve been so ashamed the past couple of days but right now, I feel strong.” Onscreen narratives about trauma often insinuate that being loved or protected by a man is the remedy for pain; Tuca & Bertie allows Bertie to heal from past trauma on her own. This scene shows that ultimately, Bertie is responsible for her own happiness and growth, which she achieved through hard work and intentional introspection. After Bertie confronts the past, she’s more equipped to live in the present, and is finally able to tell Speckle she loves him—even if she did follow it up with a quick, “Sorry to bother you!”

Upon first glance, it seems that the two protagonists—anxious, naive, daydreaming Bertie and the bold but surprisingly fragile Tuca—could not be more different (and of course, that’s what makes their friendship so great). Upon closer inspection, though, it becomes clear that these seemingly opposite personas are differently constructed masks used to cope with past trauma. They’re one in the same: two women who have endured immense pain, have been scarred, and are doing their best to move forward. For fellow survivors, Tuca & Bertie provides a model of hope and suggests that no matter what pain we have endured or are going through, love and community can help us heal. It’s heartbreaking to lose such an introspective series, so here’s hoping Tuca & Bertie finds a new home that values its importance for fellow trauma survivors.

Read this Next: Ride or Fly 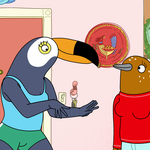 by Jourdain Searles
Stories about female friendships are often bookended by one or both of the friends experiencing a big life change and moving on.