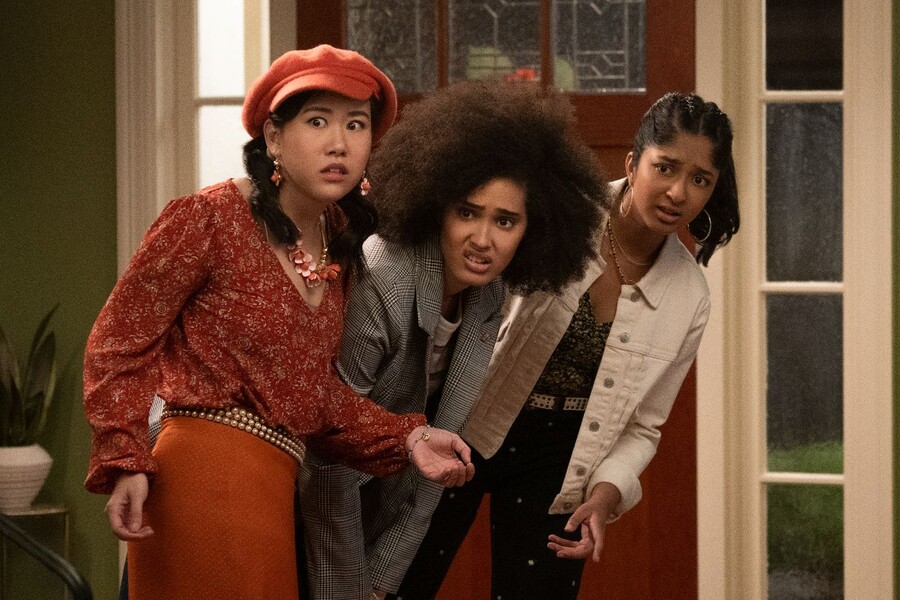 Ramona Young as Eleanor Wong, left, Lee Rodriguez as Fabiola Torres, and Maitreyi Ramakrishnan as Devi Vishwakumar in Never Have I Ever (Photo credit: Isabella B. Vosmikova/Netflix)

At times, the latest season of Lang Fisher and Mindy Kaling’s Never Have I Ever reminds me of a parent trying—and failing—to use a word such as “snatched.” The constant stream of pop culture references feels so out of touch that it made me want to exit Netflix as quickly as possible—I mean, at one point, a group of queer women calls King Princess the “most unproblematic celesbian,” which is an odd way to characterize a singer who’s had her fair share of controversies. Yet, sometimes, Never Have I Ever still feels like the show I’ve been waiting for my whole life; it’s the first show I’ve seen where a teenage protagonist doesn’t shy away from being Indian American. Instead, the show celebrates the first-generation Indian American experience and confronts grief and loss with heartbreaking accuracy. Unfortunately, the second season requires audiences to sit through obvious pandering and overdone subplots to get to the specialness lying beneath.

Season 2 picks up right where the Season 1 finale left off, with Devi Vishwakumar’s (Maitreyi Ramakrishnan) mom, Nalini (Poorna Jagannathan), interrupting a makeout session between her daughter and Ben (Jaren Lewison), Devi’s nemesis-turned-love interest. Horrified that her 15-year-old daughter is kissing someone only minutes after spreading her father’s ashes, Nalini pulls Devi away from Ben and lectures her on the car ride home. But Devi gets distracted from her mother’s harangue when she discovers that Paxton (Darren Barnet), her crush, has left her a suggestive voicemail. Knowing now that Paxton also likes her, Devi must decide between dating him, the most popular guy in school, and dating Ben, her former nemesis and current make-out partner. Devi’s love triangle is easily the worst part of the season. While it’s fun to watch a nerdy brown teenager navigate two boys chasing after her, the entire plot feels like the writers stole the love triangle in The Kissing Booth, replaced those characters with people of color, and hoped we wouldn’t notice.

Predictably, the show paints the boys as polar opposites, labeling Paxton as the hot jock who gets Devi’s “horny side,” and Ben as the competitive nerd who challenges Devi but isn’t sexually appealing. #TeamBen or #TeamPaxton is a great marketing tactic, but in reality, the love triangle disappoints. Devi has only a handful of interactions with both characters, and her attraction to the pair seems to be based solely on the excitement of having two boyfriends. While later episodes develop Paxton’s character a little more, it’s still hard to root for the couple because Devi seems more obsessed with Paxton’s hotness than with his personality, and so does the show: There’s a gratuitous scene where Paxton, who’s 16 in the show, fixes a wobbly table using power tools, shirtless, while the camera pans up and down. Not only does the whole scene oversexualize an underage boy, it also does nothing to develop Paxton’s character. The moment exists to remind the audience that it’s crazy that Paxton, a conventionally attractive man, is into someone like Devi, the nerdy Indian girl with anger management problems. The scene doesn’t show another side to either of the characters; it’s just there to reinforce the idea that Devi should feel lucky that Paxton is into her.

However, the arrival of Aneesa (Megan Suri), a new Muslim Indian teenager who transfers to Sherman Oaks, is much more entertaining. The show expertly depicts the casual microaggressions that both Devi and Aneesa endure as the only two Indian kids at a mostly white high school. Teachers keep mixing the two of them up, and Aneesa is immediately labeled “Devi 2.0” by their classmates. The instant hatred that Devi feels for Aneesa will feel familiar to any person of color who has dealt with this kind of constant comparison from their white peers. Devi’s quick to reject all the ways that Aneesa and her are the same, but still compares every aspect of herself to Aneesa. Even after the two become close, Devi’s jealousy peeks through when Aneesa befriends Ben. Devi tries to hide her anger by blaming Aneesa for breaking girl code by talking to her ex-boyfriend, but the hurt goes deeper, as we see when she yells at yet another classmate who mixes the two of them up that she’s not Aneesa because “[she] doesn’t run fast” and “[she’s] not cool.”

The arrival of Aneesa is a vehicle through which the show explores Devi’s insecurities about her identity. Rather than forcing the two to become best friends, the show depicts the two finding comfort and commonality in the fact that they don’t have to explain fundamental aspects of their culture to each other—a subplot that’s clearly written by a person of color with experience in this realm. Though the promotional material for this season focuses on Devi’s love triangle, that story arc is more or less abandoned by episode three. This means that viewers get to spend more time learning about the supporting characters in the show, such as Devi’s cousin, Kamala (Richa Moorjani), who starts working in a stem-cell research lab dominated by cis white males. The show depicts the all-too-familiar struggles of being a woman of color in the workplace, and it doesn’t shy away from showing how Kamala’s immigrant mindset affects her decision-making.

The advice she gets from Nalini and her South Asian boyfriend is to “keep your head down and your chin up”—to resign herself to the everyday sexism she encounters instead of trying to change it. Her boyfriend, Prashant (Rushi Kota), tells her that complaining that her name is left off of a research paper will get her the reputation of being difficult to work with and will only jeopardize her career. Saying nothing seems like the only option until she talks to Devi, who reminds her that she’s “been wronged and deserve[s] to be righted.” Devi’s insistence that Kamala shouldn’t play into stereotypes about Asian women being submissive gives Kamala the confidence to stand up for herself instead of playing into the model-minority stereotype that Prashant and Nalini encourage.

The arrival of Aneesa is a vehicle through which the show explores Devi’s insecurities about her identity.

The first season of Never Have I Ever was applauded for its comedic but serious approach to grief. This season is no different, as Devi continues to rely on overly simple solutions to her anger issues—which fail miserably every time. Devi is trying to deal with the loss of her father, but she’s a kid, who’s still learning how to be selfless. When her therapist, Jamie Ryan (Niecy Nash), says that an apology might get Devi what she so desperately wants, Devi replies “What, Ben?” Dr. Ryan then tries to explain to Devi that she shouldn’t apologize only to get something in return, but it’s too late, and the drama that unfolds is painfully relatable, even if the lesson is a little obvious. This season focuses less on Devi’s father’s death and more on Devi’s ongoing battles with her mental health, but the material is handled with the same care that marked the first season.

Nalini’s grieving process somewhat mirrors Devi’s this season when we’re introduced to Dr. Chris Jackson (Common), another dermatologist at Nalini’s work. Just as Devi wants a break from the pain of losing her father, Nalini wants a break from the pain of losing her husband, which leads her to pursue a relationship with Chris. Nalini possesses the self-awareness to realize what she’s doing, but she struggles to be as aware of her daughter’s feelings. In a moment of anger, Nalini calls Devi “crazy,” and though she doesn’t directly apologize, the show unpacks the effect that this moment has on Devi’s mental health as well as how hurtful such language can be. In these moments, Never Have I Ever feels as groundbreaking as ever: It’s a teen dramedy that accurately depicts an Indian American teenager struggling to be a good person. But minutes later, the show snaps you back into the realities of appealing to white audiences with having a primarily POC cast. Never Have I Ever is like a teenager: It wants to be popular, relatable to everyone, and alienating to no one. But, like Devi, the show is so much better when it embraces its identity as one of the first mainstream shows to feature a flawed, messy and sometimes unlikeable South Asian teenager wholeheartedly.

Read this Next: For Indigenous People, Boarding Schools Are a Haunting Legacy 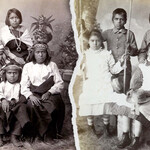 by Amanda Gokee
The history of forced assimilation has been intentionally erased. 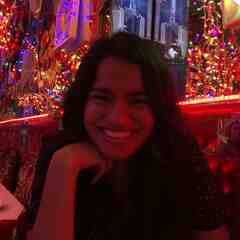 Mansee Khurana is a freelance reporter based in New York City.