In an intergalactic future, best friends Kim and Kim are bounty hunters and general troublemakers. As they fly around the universe trying to make a few bucks, they also dish on relationships, roll their eyes at space-age sexism, and manage to blow a bunch of stuff up. This is the premise for Kim & Kim, the new comic series from writer Magdalene Visaggio and artist Eva Cabrera that debuted from Black Mask Studios last week. The first issue of the comic feels like Tank Girl set in the world of Cowboy Bebop. In short: very, very fun.

Oh and BTW, both of the main characters are queer—Kim D is a cisgender bisexual woman and Kim Q is trans and self-identifies as queer, though she’s still sorting out the specifics of sexuality. Centering these characters was important for Visaggio, who was undergoing her own transition process while writing the series. I got the chance to ask Visaggio about the inspiration for Kim & Kim and where she’s hoping to take the series. 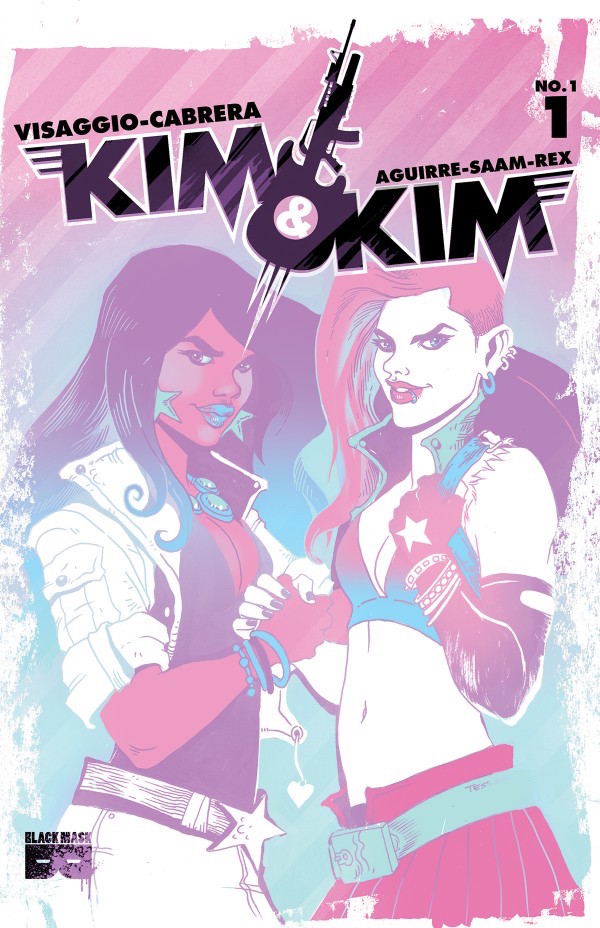 SARAH MIRK: Can you tell me a bit about the inspiration for the comic, both the storyline and aesthetic? What are you drawing from in pop culture? Are there other queer, trans, and/or female characters you look to as models for this story?

MAGDALENE VISAGGIO: Kim & Kim comes from a lot of places, and one I don’t get the chance to bring up too frequently is Nevada, Imogen Binnie’s incredible trans-centric novel. In a lot of ways, Kim & Kim is Nevada hooked up to a bunch of effects pedals. Nevada is a pretty quiet book, a psychodrama that takes place largely in the main character’s head, while Kim & Kim is insanely loud. But Kim & Kim would not exist without Nevada in anything approaching its current form.

One of my protagonists, Kim Q, is in so many ways an exaggerated version of Maria Griffiths, Nevada’s principal character. She’s the inspiration for so much of the book’s aggro punk atmosphere, so much of Kim Q’s aimlessness and laziness and even her penchant for violence. They’re both defined by irresponsibility.

Otherwise, the book draws from a lot of road narratives; it’s kind of my Han and Chewie, ya know, a couple of scofflaws living by the skin of their teeth. I generally call it Cowboy Bebop meets Broad City, and that’s probably as accurate a description as any. Cowboy Bebop inspired the space bounty hunting. Broad City informs a lot of how I approach the storytelling, even if my stories involve giant sandworms from hell and shape-shifting octopus people.

How do you see the comic being different than its inspirational sources? What gaps in representation or storytelling are you aiming to fill?

That’s a big question, and I don’t really entirely know how to answer it. I didn’t go into Kim & Kim with a powerful overarching idea or narrative goal. The main thing I was working against was myself; I have tended for a long time toward very dark, very political, very philosophical stories. And the thing is that when I do have a big hairy narrative goal, I can get bogged down in it. Kim & Kim has been an exercise in restraint, funnily enough. It’s about staying focused, not getting lost in your subplots, keeping your eye on the heart of your story.

From a representation perspective, absolutely I wanted to do a comic about queer women—specifically trans women—because we’re not super represented in comics. I can’t think of too many trans women protagonists in comics. I resolved a long time ago to avoid creating more White Guy, Brown Hair characters, and after Leelah Alcorn’s suicide, I resolved to try and focus on developing trans characters, because if I’m not going to do it, I can’t assume anyone else is, either.

Because that has to be a priority. At least for me. I don’t think it’s going to be a priority for the vast majority of cis comic writers out there, so that means I do feel an enormous responsibility to ensure that I’m doing everything I can to increase and improve LGBT (and trans specifically) representation in my own creative field. 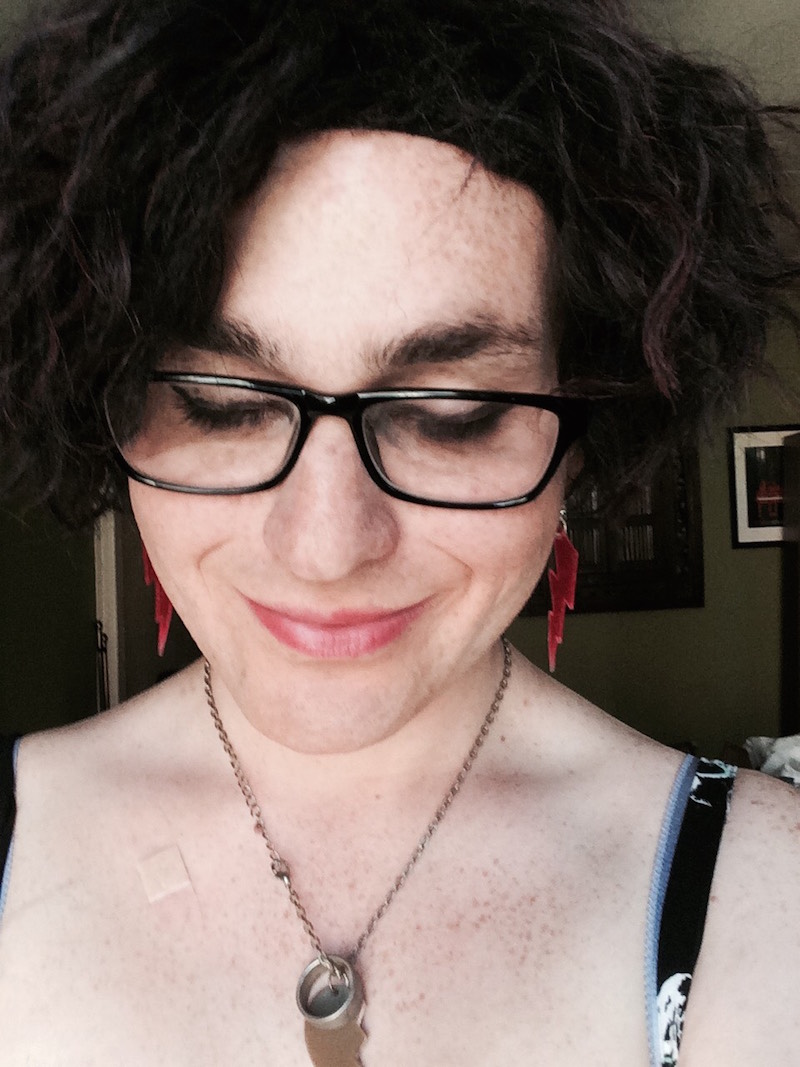 Can you tell me a bit about Kim and Kim's gender identities and sexualities? The comic describes them as best friends, but are they also a romantic couple? I got some romance vibes from them, but maybe I was just reading into it.

The Kims are not a romantic couple, no. I mean, Team Kim ships them pretty hard, but they aren’t officially an item. Of course, people will read it how they read it.

The Kims’ sexualities, eh? Okay. So Kim D is a cisgender bisexual woman; the one person we see her express attraction to in the book is this dude Columbus Cross, who we deliberately portray as pretty androgynous, almost actively so. Kim D looks for different things from men and women, but these also aren’t exclusive categories. She doesn’t identify as pansexual because she definitely has gendered preferences, even if there’s some crossover.

Kim Q is trans and self-identifies as queer, largely because she is still sorting out her sexuality. She’s still sorting out her comfort level with her own body (pretty aggressively, but very deliberately) and has a hard time being sexual with anybody. She’s had attractions to both men and women—both come up over the course of the series—but the main thing she needs is to feel like she can totally trust her partner. That doesn’t come up very often.

Kim Q’s transness is hugely important for her character, both in order to make a lot of sense of her backstory and to understand who she is and how she operates. My whole approach to writing Kim Q is that she’s a trans woman who has done the work of figuring out her shit but has discovered over the course of it that there was a lot more shit there than she anticipated.

The thing that is really telling about Kim Q is the way in which her aggro femininity is precisely her way to negotiating her femininity with herself. She’s trying to locate this way to be feminine without feeling like she’s putting on a show. She’s not super sure she’s pulled it off, to be honest, but she’s out there every day trying. She dresses in these really aggressive, confrontational outfits that unabashedly identify her as a woman and which paint her as intimidating and powerful. Her whole punk aesthetic is this attempt to wed “girl” and “power” in a way that makes sense to her.

What was the process of writing and pitching this comic like? It's still pretty rare to see stories centering on queer and trans characters in print!

I started developing this book sometime between March and May of 2015. The first issue actually took me a few months to get down because I was trying to nail the vibe; what kinds of stories would Kim & Kim tell? I knew from the outset I wanted to tell a small, tightly focused story with clear stakes and dramatic tension, a very deliberate move away from the sprawling, unwieldy epics I used to default to. But the original Kim & Kim was much more an overt action story, focusing on high-octane set pieces instead of the Kims and their personalities. Figuring out what kind of book this was took a lot of time and rewrites.

The actual writing process was really pretty therapeutic for me; I hadn’t been in therapy too long when I started, and Kim & Kim provided a major vehicle for me to work out a lot of stuff, especially internalizing that being trans meant having a future and how I wanted to understand and negotiate my own femininity. The super brash girliness of the book is kind of that process in action: How does someone who has spent her life recoiling from femininity (because being trans in the patriarchy is all kinds of fucked up) make sense of embracing it? That negotiation process is playing out on the page. 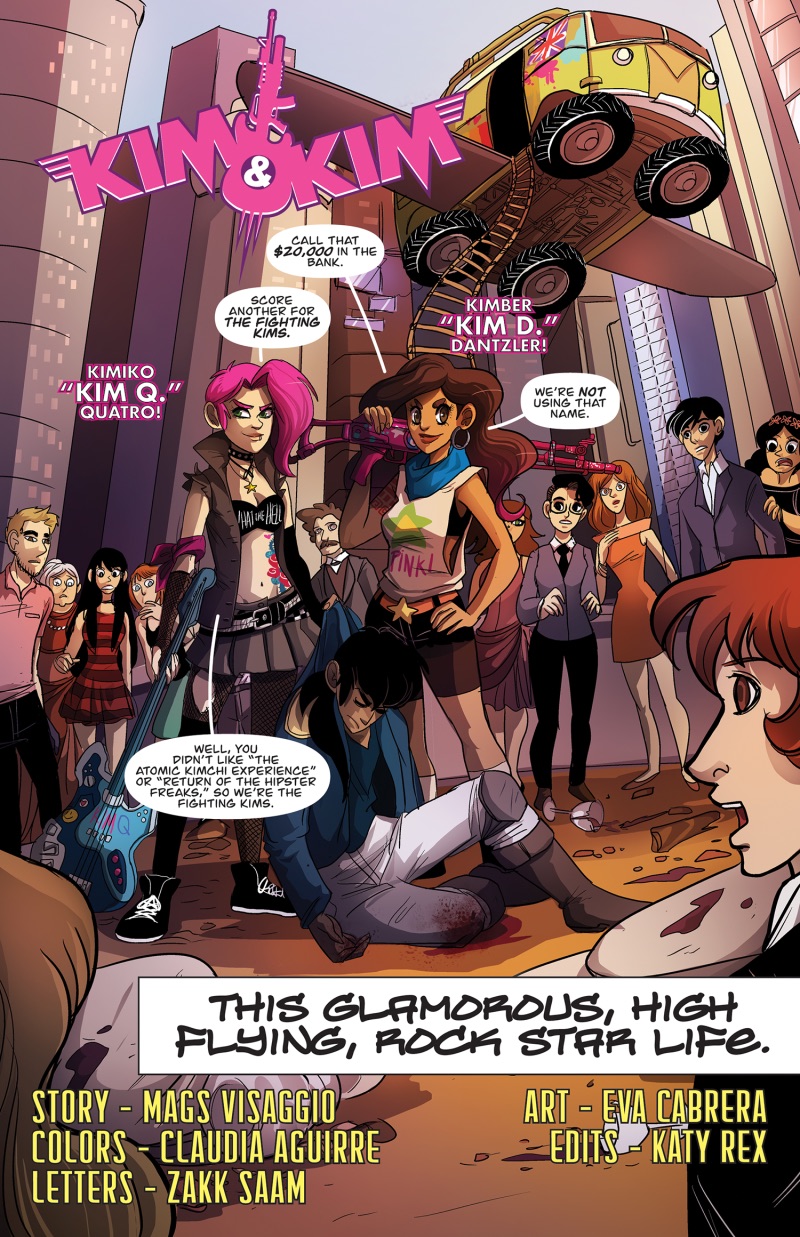 A page from the first issue of Kim & Kim.

There is such a rich world of LGBTQ representation in webcomics—what was it like bringing this story to print, and how are you feeling about it being on store shelves all over the country?

It’s really weird knowing that this dumb, really personal story is something that’s gonna be in comic shops everywhere, and I’m a little freaked out by it to be honest. I’ve gotten messages from other trans women I know about how happy they are to see a trans woman presented in media in this kind of positive, real-feeling way, and I’m really glad that they’re finding something worthwhile in it. And I knew that if this book ever got picked up that this would be exactly the reaction. But it still kinda messes with me.

I definitely feel a responsibility—and more than one person has brought that to my attention, that in the role that I’m in, I have a really interesting place in this big representation discussion. But [it] also just makes me feel even more acutely all the ways in which I’m not representative of the larger trans community: I’m white, I’m a working writer, I have a stable job at an LGBT-friendly office. My wife and I are paycheck to paycheck, but mostly that’s because we’ve made a bunch of deliberate life choices to focus on our artistic careers. All in all, I’m pretty insulated, and that means there’s a lot of the American trans experience I haven’t experienced.

Having the book out there brings all this to mind, because it puts me and my thoughts in the public eye.

by Lilian Min
The first-ever Cartoon Network show to be created by a woman challenges TV's gender norms is all sorts of brilliant ways.